Bible for African-American youth to be released 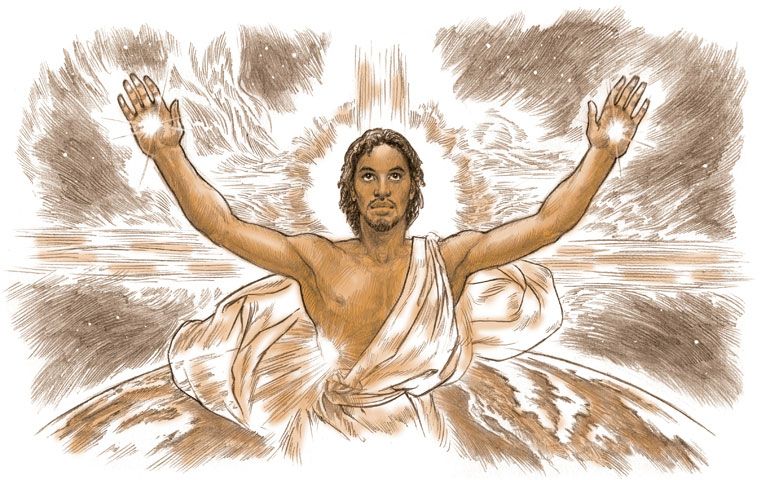 From The African-American Youth Bible, an llustration of Jesus' second coming based on Revelation 22:20 (© St. Mary's Press/Anthony VanArsdale)

A new Bible will hit bookshelves in January. But unlike hundreds of others available, illustrations in this Bible will include New Testament images portraying Jesus as an African-American.

This is just one way The African-American Youth Bible, which contains commentaries, footnotes and art created by black Americans, hopes to evangelize and educate young black Catholics.

The Bible mimics the format of the successful The Catholic Youth Bible, published by St. Mary's Press. The idea began in 2009, when St. Mary's Press president John Vitek and Bishop John Ricard, president of the National Black Catholic Congress, met to discuss how they could help young African-Americans.

"We wanted to help serve a population of kids that no one is paying attention to, in particular, African-American Catholics," Vitek told NCR. "I looked around and saw none of the other publishers paying any attention to them."

For Ricard and Vitek, helping black youths meant creating a Bible. But a task that big did not come easily.

"It's very large; several books in one," Ricard told NCR. "It's a very ancient story, over 2,000 years. Keeping that relevant today, interesting and appealing today, is such a challenge."

In order to create a successful Bible, Spiritan Fr. James Okoye joined the project as editor. Okoye has a doctorate in Scripture from the Pontifical Biblical Institute in Rome.

"Many African-Americans are converts from the Baptist church, and the tendency is to overemphasize where the Catholic church differs from the other Christian churches. So we have to reach a balance of being happy with being Catholic, and also recognizing what is Christian, and what we share in common with other Christians," Okoye told NCR. "For example, Martin Luther King is not a Catholic. Should we even mention any of his writings in the making of this Bible? And how we achieved a balance was by saying there were Christian things about the Gospel that we share together. And, in this day in age, we should emphasize [those things], while not neglecting what is specific to Catholics."

Okoye aimed to connect African-American history with Catholic doctrine in the introductions to each book in the Bible. Some introductions were easy, such as explaining how the Book of Exodus was used to keep hope alive for African-Americans during times of slavery. Other texts, such as those found in the letters of Paul, were more challenging.

The African-American Youth Bible includes a detailed history of major events in African-American Catholic history, spanning from the 1600s to the present day. Among the events are Pope Gregory XVI's condemnation of the slave trade in 1839; African-American Fr. Augustus Tolton's ordination in Rome in 1886 because no seminary in the U.S. would admit him; and Bishop Wilton Gregory's 2001 election as the first black president of the U.S. Conference of Catholic Bishops.

Culture | Bible for African-American youth to be released

Fourth Sunday of Easter: You are mine