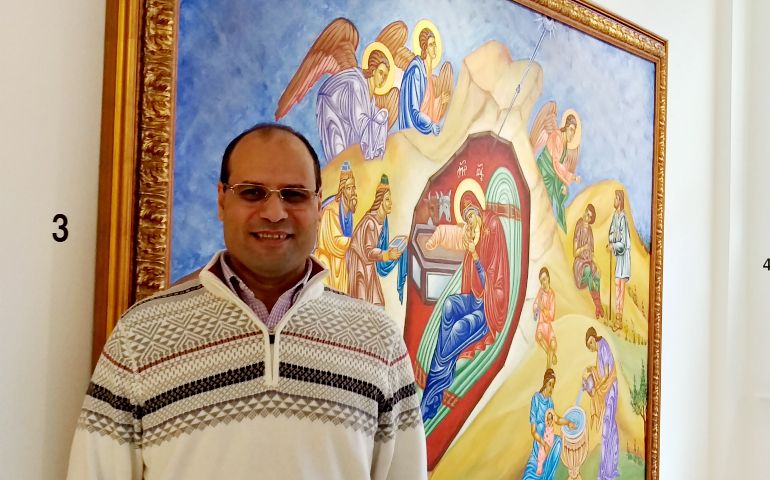 New York — Ayman Fayez's mission recently led him 6,000 miles from his home in Egypt to a gallery in Manhattan's East Village.

Though not a missionary in the traditional sense, the Coptic Catholic iconographer was there "transmitting God's messages ... through art," and serving as an important reminder of Egypt's diverse cultural and religious heritage.

"Not everyone knows there are Christians in Egypt, or they think that the Christians were originally Muslims and converted," said the 47-year-old artist, who, like all Egyptian Copts, traces his Christianity all the way back to St. Mark the Apostle.

"Then they look at the paintings ... and begin to understand," Fayez told NCR from inside the Sheen Center, an art complex affiliated with the New York archdiocese where his icons and other religious-based art were on display throughout the month of December.

He was born in the Upper Egyptian city of Tahta, considered a Catholic stronghold, "because that is where the most Copts converted to Catholicism" from Orthodox Christianity, under the influence of European colonial powers beginning in the early 18th century, Fayez explained.

He recounted how he'd entered Egypt's only minor (and now defunct) seminary at age 12 and stayed for four years, before deciding that the priesthood in the traditional sense was not for him.

"One doesn't have to be a priest or missionary in the classic sense ... I knew I could be serving and transmitting God's messages ... through art," said Fayez, relaying how he'd decided to leave the seminary, and eventually go on to get a university degree in architecture.

He credits his twin brother, who'd also gone to minor seminary and went on to be ordained a Catholic Coptic priest, with instilling in him the love of icons, which are paintings most typically representing Christ, Mary, saints and angels.

"As part of his seminary studies, my brother was researching icons, and this attracted me," said Fayez, who until then had been more interested in surrealist and plastic arts.

Fayez said he soon started painting icons, as well as replicas of the wooden funerary portraits that ancient Egyptians buried with their dead.

On his own, he studied the different schools of iconography, including Coptic and Russian, and later traveled for study in Greece, where he specialized in iconography of the so-called Byzantine school.

"An iconographer is different from other artists, in that he has to believe in the Bible, because he is translating it into paintings," explained Fayez. "We are referred to as 'writers of icons,' not 'painters.' The writer of icons is a messenger. You have to have studied the Bible and theology, which you then try to translate into paintings, which carry the [Gospel's] messages to the whole world."

Fayez said he is now dividing his time between writing icons and producing cultural videos for Egyptian and other Middle Eastern Christian television networks from his home in Egypt's capital, Cairo.

And for the second time in in two years, he's exhibited his icons in New York: first, at the Brooklyn church where his brother now serves as pastor to the area's Coptic Catholic immigrant community, and more recently, at Sheen Center in Manhattan, where NCR caught up with him.

It had been two weeks since a suicide attack at a Cairo cathedral had killed and wounded scores of worshipers. Fayez said such attacks, ever more frequent since the 2011 revolution that toppled the North African nation's 30-year dictatorship, have only made the Coptic Christian minority of predominantly Muslim Egypt more adamant about staying put.

The attacks "don't make the Copts leave their church. On the contrary, they give us stronger faith ... and deepen our attachment to the church," he said.

"It is not easy for us to leave," he continued, explaining that all Egyptians, Muslims and Christians alike, "adhere to the soil we are raised on."

His icons on display at the Sheen Center depicted, among others, Jesus at birth, Christ Pantocrator, Mary, St. Joseph the Carpenter, Mary Magdalene, and the third-century, Egyptian-born Christian monk St. Anthony the Great.

In addition to questions about Copts in Egypt and other minority Christians of the Middle East, Fayez reported that those who'd stopped in to see his exhibit also wanted to know more about icons in general, and about whether or not such artwork could be displayed in houses, or only in churches.

"Everyone was asking about the icons ... and some said it was the first time they were seeing them outside a church, and asked if they could buy them," which they could, and did, he said with a grin.

The icon "reminded me of my time in Egypt," said Dammarell, adding that her visit to Fayez's exhibit in New York brought back fond memories of when she'd taught English to Coptic Catholic seminarians in Cairo nearly 30 years ago.

She said she was concerned for the future of Egypt's Copts and other Christian minorities amid the turmoil in present-day Egypt and other nations of the Middle East.

"Unfortunately, the majority of Americans ... forget that Christianity originated in and is still rooted in the Middle East," Dammarell said. "Sadly, today many Christians are fleeing the Middle East because of persecution and the past two decades of war."

Dorothy Negron, a New York native, said that she'd only ever associated Egypt with "pharaohs and pyramids" before meeting Fayez's twin brother, Fr. Francis Fayez, who lives in the Brooklyn rectory where Negron works. Fr. Fayez told her about Coptic and other Christian minorities of the predominantly Muslim Middle East.

She helped set up the exhibit at the Sheen Center after meeting the priest's artist brother and watching him create some of his icons in the rectory.

"I watched Ayman write icons ... and I saw this process of creating, of writing the icon and it really moved me. It was very emotional; it was very holy," said Negron. Until that moment she did not know "a lot about icons because in our Roman Catholic tradition we really don't hear much about icons," she explained.

The dedication of Ayman Fayez's exhibition of icons in the Sheen Center Gallery https://t.co/pfClXNB0xr pic.twitter.com/Jwx4c1Kv1W

Negron said knowing Fayez brothers encouraged her to learn even more about Egypt and the Middle East. She had recently attended a lecture on the devastating effects war in Syria was having on that country's Christian minority.

"I have expanded my understanding," she said.

Fayez was leaving in a few days' time back to Egypt, where he'd already agreed to speak about his New York experience with other artists, academics, tour guides and icon experts, many of them Muslims.

"I have had multiple exhibits in Egypt," he noted. "Many Muslim archeologists and specialists of Coptic art attended, and among them were veiled women, and they were very pleased."

In Egypt, some Muslim university students were even specializing in Coptic Christian art, and Muslim guides were giving tours of the country's thousands of churches, he added.

"Art has no place for fanaticism," he said.