'He Named Me Malala': A normal, heroic girl 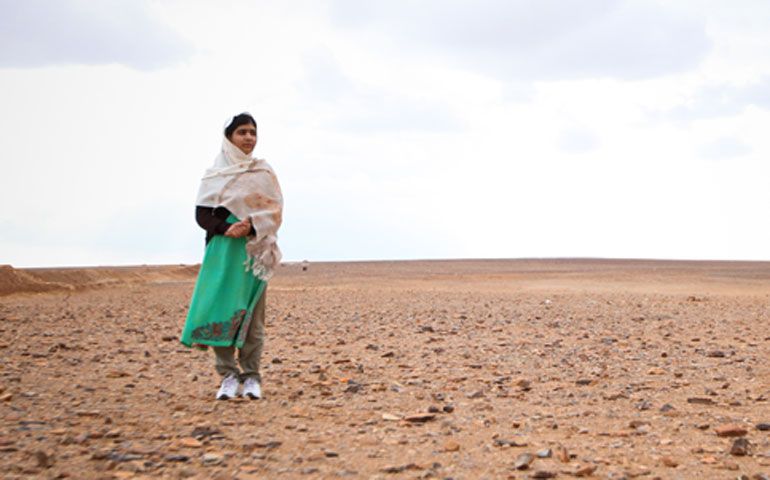 Malala Yousafzai in the documentary “He Named Me Malala” (Gina Nemirofsky)

There is a legend in Pakistan that goes something like this. During the Second Anglo-Afghan War (1878-80), a young woman named Malala (or Malalai) was tending to the injured when the Afghan army started to retreat. She called out to her husband to stand firm and, taking off her veil, she used it as a flag to rally the troops. They turned back and defeated the British that day, but the heroic Malala was killed.

“He Named Me Malala” is Oscar-winning producer/director Davis Guggenheim’s documentary film about Malala Yousafzai, the Pakistani schoolgirl who survived an assassination attempt by the Taliban on Oct. 9, 2012. Her father, Ziauddin, named his daughter Malala, not because it was a name that could bring sorrow, as most people in their town believed, but because it meant courage.

The film opens with a beautifully animated sequence, narrated by Malala, about her namesake. The blending of her voice with the deeply hued images is sheer cinematic poetry.

Seldom does a child follow in the footsteps so closely of the one for whom she is named. It all began in her family and with her father’s dedication to education, especially for girls. Although war was ongoing by U.S. forces against the Taliban in Afghanistan in the 2000s, the Taliban were on the rise in northwest Pakistan. In Swat, a town about 100 miles from the capital of Islamabad, the Taliban first seemed concerned for the people. But under their leader, the young Mullah Fazlullah, the activities of women were becoming more limited, and education for girls slowly shut down.

The BBC wanted to get the inside story but no one would talk. Together with her father, 12-year-old Malala decided to keep an anonymous blog for the BBC about her experiences at school. But because of her father’s known public activism and involvement with education and opening schools for girls, the Taliban eventually figured out that Malala was the blogger and she became a target.

“He Named Me Malala” is a gentle film that moves back and forth between Malala and her family today and those dark days just three years ago when she and two of her classmates were shot in their school bus on their way home.

Malala was shot in the head, and after surgery in Pakistan, she was airlifted to England, where doctors worked tirelessly to save her life. When she came out of the coma, the first person she asked for was her father. She was worried, distraught that he might blame himself for what happened. It was her decision to keep that blog and she owned it.

Malala is a normal teen but fierce when it comes to her passion: education for girls. As most people know, she was the co-winner of the 2014 Nobel Peace Prize for her continuing efforts to promote education around the world, just as she is a normal girl in Birmingham, England, struggling to get good marks in school. The film is gracious and generous and allows Malala to speak, explaining the difference between Islam and the extremists who use it for political power.

It was interesting to see some comments by what looked like well-educated Pakistani citizens who believe that the assassination attempt on Malala’s life was some kind of publicity stunt. Really? Perhaps the Taliban’s propaganda is having an effect.

It is even more interesting to see how she takes on Goodluck Jonathan, then president of Nigeria, when she visited him to talk about the schoolgirls abducted by Boko Haram.

The film is barely 90 minutes long, but I could have watched more. “He Named Me Malala” is a film almost anyone can and should see despite its rather ridiculous PG-13 rating. The only thing that could be mildly distressing for parents is the photo of the bloodstained bus; kids see so much more than this on television and video games. At least here, there are consequences, and the context provides an inspiring and moving story that audiences can talk about.

As for Malala, she holds no anger about what happened to her -- none at all.

“He Named Me Malala” is an intimate look at this teenager’s life. It is a celebration of girls, women, education, teachers, family, health care, advocacy, human rights, perseverance, returning good for evil, and the generosity of humanity in the face of the most cowardly violence. And, dare I say it, how lucky we are, as Malala reminds us, that we get to go to school.

[Sr. Rose Pacatte, a member of the Daughters of St. Paul, is the director of the Pauline Center for Media Studies in Los Angeles. “He Named Me Malala,” a film from Fox Searchlight Pictures, opens in theaters Oct. 2.]

Culture | 'He Named Me Malala': A normal, heroic girl

Cardinal Shan of Taiwan dies at 88; pope praises his service to church