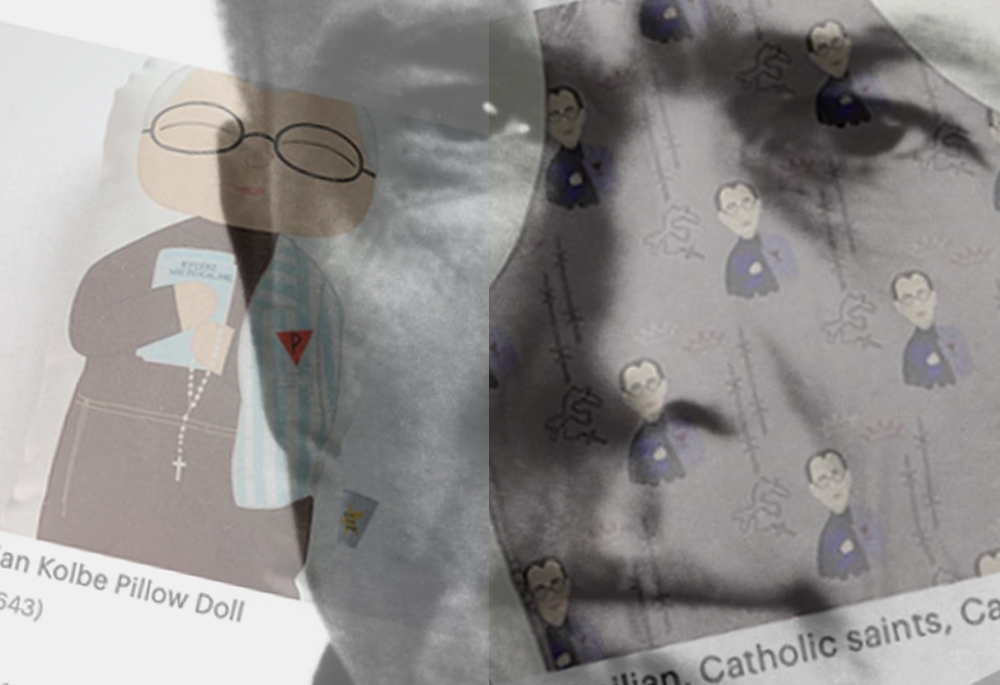 An undated photo of St. Maximilian Kolbe (CNS file photo), superimposed over search results for his name on the website Etsy in August 2021 (NCR screenshots)

Last month, Marie Elaine Quiray, the creator behind Blessed Friends Forever, an online retailer of Catholic children's items, posted a preview of her latest series of saint T-shirts, including a St. Maximilian Kolbe shirt that was half brown habit to represent Kolbe's Franciscan priesthood and half striped uniform with a red triangle, a replica of his Auschwitz prisoner garb, where Kolbe heroically gave his life for a Catholic father who was chosen for starvation.

Commenters on social media pleaded with Quiray to reconsider her design, while several other followers came to her defense, stating this shirt was their favorite design and they couldn't wait to order. 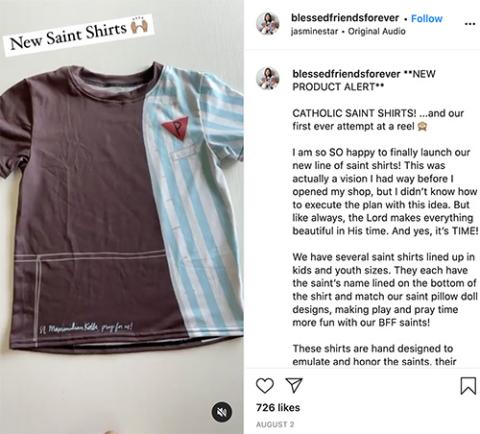 Within a day, all comments had been removed from the Blessed Friends Forever product launch previews, and an announcement posted both on Instagram and Facebook imposed over the striped portion of a photo of the St. Maximilian Kolbe shirt, announcing that the shirt would be pulled from the shop.

"This shirt was in NO way made to disrespect or promote the hideous actions that occurred during the Holocaust," said the announcement, noting that the saint is often depicted with his imprisonment jacket.

"The intent of all our saint shirts, including St. Max's, is to honor them, their lives, and their story. In NO way would we want children to mock, disrespect, or be reminded of the pain the lives and victims endured during this tragic time of our history," the announcement said. "We apologize if it has offended you or caused any issues. Please know this was never our intention. Our prayers are with you always as we plan to honor and celebrate St. Max in other ways."

While many commenters appreciated the apology, several objected to the removal of the shirt. Some asked if Quiray would be removing her other children's items that depict Kolbe with the half-prison stripes, including a pillow doll. She did not. By day's end, all comments had been removed from those posts as well.

Aubrey Kemper, a Florida Catholic woman with Jewish heritage, was shocked by the dolls. "I have living Jewish family members whose parents remember escaping Europe in the nick of time," she told NCR. "I fear that kiddifying the atrocities of the Shoah will make it seem as though it was an anomaly — that it happened so far in the past that it could never happen again — even though I know that to be untrue."

Quiray of Blessed Friends Forever did not respond to several requests for comment. 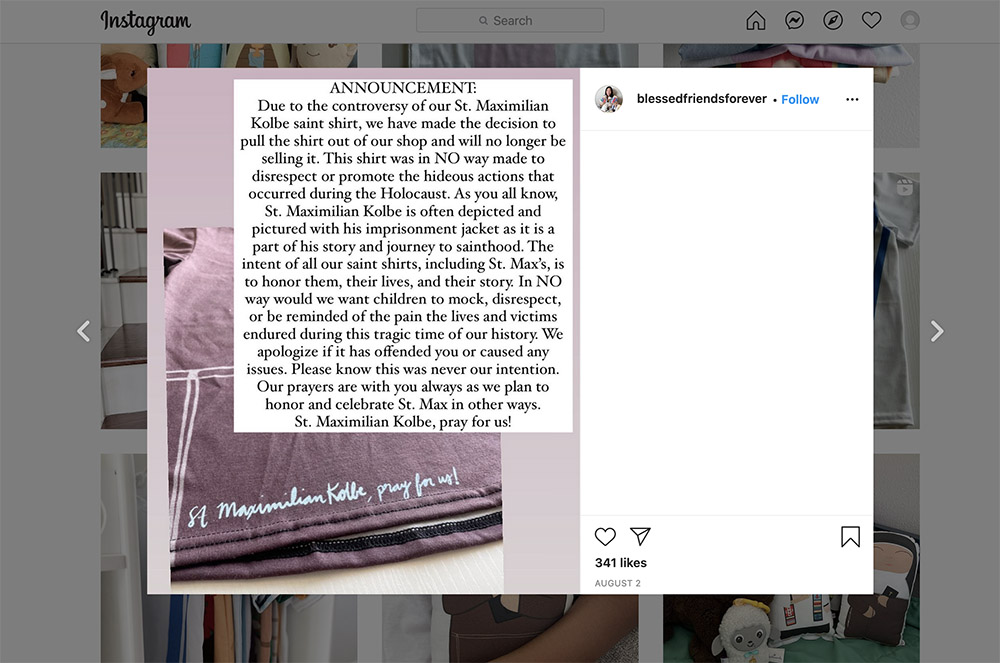 But Shayna Lam of Caelesti Co, a friend of Quiray and another Etsy seller who creates Catholic apparel for women and children, including a set of boy's overalls with the same image of Kolbe in an all-over print. encouraged Quiray to continue selling the shirt, although she understands why she removed it from her shop.

"Today we are standing against cancel culture — something they are offended by, they want to delete right away. We can't erase that part of history," said Lam, who has a special devotion to Kolbe and named her son after him.

Lam feels the clothing items are a good conversation starter. "Christ calls us to evangelize," she said. "That is the way to teach somebody about our faith. I'm not going to take any of my things down because it's my duty as a Catholic to educate somebody on that."

Quiray and Lam are only two of many Catholic retailers who have children's stuffed dolls, clothing, pillows and peg dolls that represent Kolbe as a comic-like character with half an Auschwitz uniform.

Sock Religious, an online Catholic clothing retailer whose motto is "Starting conversations through joyful products," sells $14 socks with the image of Kolbe wearing the half-stripes, half-cassock, as well as the well-known image of the watchtower and train tracks leading into Auschwitz-Birkenau.

However, that second installment of the concentration camp wasn't built until a year after Kolbe's death, according to Pawel Sawicki of the press office of the Auschwitz Memorial in Poland. 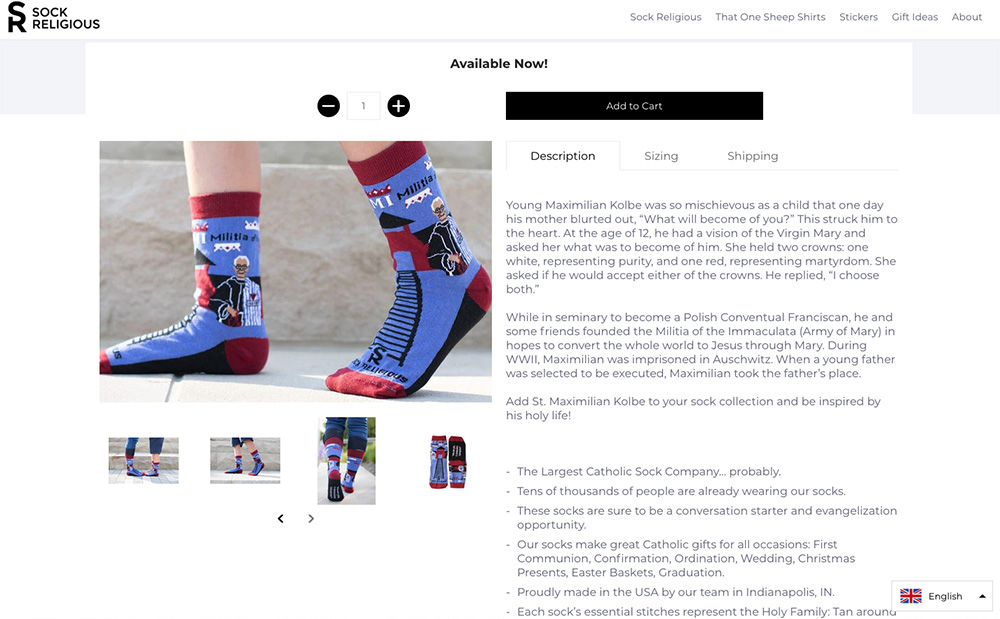 The Sock Religious website lists $14 socks with the image of St. Maximilian Kolbe with half-stripes, half-cassock clothing, as well as the image of the watchtower and train tracks leading into Auschwitz-Birkenau. (NCR screenshot)

Sock Religious cofounder Scott Williams said the company has received both positive and negative feedback on the Kolbe socks. "It was never the intent of the creative team to offend people, but we did want to offer images that depict his life and martyrdom," Williams told NCR.

Williams did not comment on the historical inaccuracy of the socks.

Maria Hayes, a Polish-American Catholic, strongly objects to the Holocaust imagery on these items. "My heart clenched in pain the first time I saw Catholic clothing and accessories with the symbols of genocide turned into a product," she said. "It seems that those companies use Auschwitz imagery as a mere background for Kolbe's martyrdom, without giving thought to the millions of people who perished there, primarily the Jewish people."

Another complicating factor with these items is Kolbe's own antisemitic writings, which were reflective of both Polish and Catholic attitudes at the time. Kolbe was the editor-in-chief of two papers, Rycerz Niepokalanej (Knight of the Immaculate) and Maly Dziennik (Small Newspaper), the former which is represented on Blessed Friends Forever's pillow doll, although misspelled. In both papers, Jews were portrayed as "Poland's cancerous ulcers" and described as vermin, and the papers called for a boycott of Jewish shops. Kolbe himself wrote articles accusing the Jews of striving for world domination and having "a keen interest in the decline of morality." 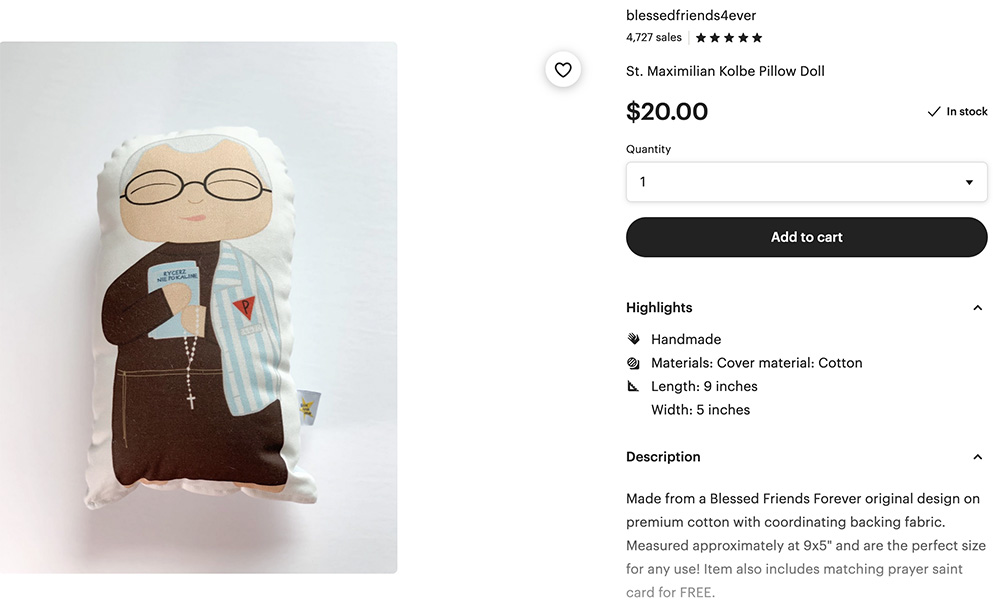 Suzanne Brown-Fleming, director of international academic programs for the U.S. Holocaust Memorial Museum, cautions that Kolbe's antisemitic views should be seen in context. "He like others of his day had the same kind of anti-Jewish notions that were part of Catholic teaching at the time," Brown-Fleming said. "Catholic teaching about the Jews at that time would not have advocated for extermination. That would not be something in his mind."

Some remembrances of Kolbe seem to downplay this and insert details into his story that are not factual. While common lore states that Kolbe was arrested for hiding Jewish people, he was actually arrested and sent to Auschwitz for being a Polish priest and aiding the Polish resistance against the Nazis. His fellow prisoners in Block 11 were all political prisoners such as himself, so he would not have been with Jewish prisoners, although he may have encountered them in the rest of the camp.

Rabbi Abraham Cooper, the associate dean and director of global social action of the Simon Wiesenthal Center, a leading Jewish human rights organization, recognizes that in a time where Holocaust ignorance and even denial are prevalent, education about the evils carried out by the Nazis is essential.

"Some of the earliest victims were Catholic priests, in the 1930s at Dachau," Cooper said, "and Fr. Kolbe is representative of many non-Jewish opponents of Nazism who paid the ultimate price for resisting."

While recognizing that the creators of items such as the dolls and socks have good intentions, Cooper questions their efficacy. "Maybe the person who designed it had in mind to commemorate or celebrate someone who was murdered by the Nazis," he said. "But whether intended or not, it degrades history and memory."

Cooper asks that people consider the meaning before purchasing items such as shirts and hats with only Kolbe's prisoner number. "You're talking about donning a T-shirt with a number. People were given numbers because they were no longer considered human. They were reduced to numbers."

Cooper has much stronger words regarding the socks. "No inmate even had socks, they had no proper clothing! You're putting a guard tower of a concentration camp on socks? That's frankly beyond the pale. What are you trying to make cool, the legacy of Fr. Kolbe? If that's the motivation, there are better ways to do that."

People should consider how Jewish victims of the Shoah would respond to seeing such items while walking down the street, Cooper said.

"Turning either sainthood or memory of the victims of the Nazis into fashion is not acceptable," he said. "Kolbe's story deserves to be remembered and taught, but to assume that you're going to end up venerating someone by doing these kinds of things? No. It denigrates his memory."

A version of this story appeared in the Sept 17-30, 2021 print issue under the headline: Maximilian Kolbe merchandise under fire.