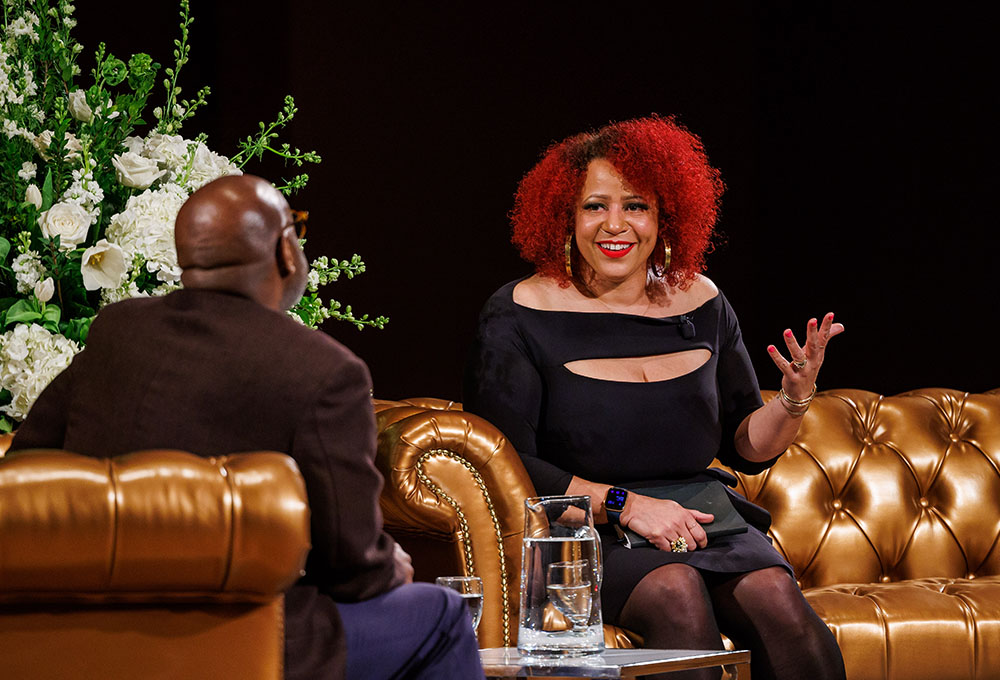 "Hey, Notre Dame! This certainly does feel like a homecoming," New York Times journalist and Pulitzer Prize-winning author Nikole Hannah-Jones said as she greeted an enthusiastic University of Notre Dame audience on March 15.

Hannah-Jones laughed as she told the crowd that she'd just received her Notre Dame diploma despite having graduated in 1998. At graduation, she said, she owed the university money that she couldn't pay and hadn't received her diploma. "Today," she laughed, "the provost gave me my diploma! I did graduate and now I have the proof!"

Hannah-Jones had returned to offer the 2022 Red Smith Lecture, sponsored by the university's Gallivan Program in Journalism, Ethics, and Democracy. The event also served as the inaugural Sojourner Truth Lecture.

But as her audience quickly saw, Hannah-Jones certainly hadn't come back to lecture. She was there to share her story and responded to questions about her life and work from Mark Sanders, a professor of English and Africana studies.

"I got into the field of journalism because I understood how powerful journalism is if we are to have a democracy," she began. "I have many disagreements with our founders but one area where they were correct — particularly Thomas Jefferson — was the belief that you could not have a democratic republic without an informed citizenry."

"We're at a pivotal moment in our society and have record low trust in our government institutions," this seasoned journalist warned. "But like so many other businesses during the pandemic, newspapers and news organizations had to downsize."

Hannah-Jones explained that investigative reporting, her own field, is especially expensive but critical for news organizations.

Hannah-Jones said her own interest in journalism came early. She was the second of three daughters born to Milton and Cheryl Hannah, an interracial, working-class family in Waterloo, Iowa. Milton was African American while Cheryl had Czech and English ancestry.

'What this place taught me was resiliency, and I was always going to use their low expectations of me to prove that they were wrong.'

"I was a very nerdy child and I used to read the paper with my dad every day," said Hannah-Jones. "The only place that Black people appeared in our paper was in the crime log. But I also knew that Black people were doing all kinds of other things. That erasure mattered, and as a Black girl, I also understood how important it was that those of us who were marginalized would write some of the stories about our own community."

She'd chosen to apply to Notre Dame because a degree from an elite school was needed for what she wanted to do — journalism. And Notre Dame was within driving distance from her Iowa home. "There was certainly no money for airplane trips back and forth from college," she said.

Early in her freshman year, however, she quit going to classes but not because they were too academically difficult. "The other students were often from prep schools and had read books that I'd never heard of," she said. "We just had very different backgrounds, and I didn't have the same kind of Catholic education."

Three "Fs," a stern call from her father and a summons from an academic adviser seemed to spell failure at the end of the semester. She was advised to withdraw so that she wouldn't flunk out. But, after consulting with a Black faculty member, this teenager did a reset and returned to class. "My family had sacrificed everything for me to come here," she said.

When Hannah-Jones discovered Pierce, who taught classes in modern African-American history, she'd found an academic niche she loved. In her sophomore year, however, Hannah-Jones and another girl were called the n-word by some white Notre Dame football players driving by as the girls struggled to push a stalled car out of an intersection on their way back to campus.

It was deeply wounding, and Hannah-Jones wrote about it in The Observer, the student newspaper. She explained that the first time she'd ever been called the n-word was by fellow students at a prestigious Catholic university. Her blunt, angry column, "Notre Dame is yours, but the world is mine," sparked campus-wide discussion about whether or not racial prejudice was as prevalent at Notre Dame as one student claimed.

More than 25 years later, Hannah-Jones told her Notre Dame audience: "So, what this place taught me was resiliency, and I was always going to use their low expectations of me to prove that they were wrong."

After graduating from Notre Dame, she earned a master's degree in journalism and media and began her career. After stints as a journalist at papers in Raleigh, North Carolina; Portland, Oregon; and New York City, she was hired as a staff reporter for The New York Times in 2015.

In 2019, Hannah-Jones got Times approval to develop "The 1619 Project," a look back at the 400-year history and legacy of slavery in the United States. The project, a series of articles published in The New York Times Magazine, offered essays by respected civil rights activists, historians and sociologists. In the opening essay for the series, Hannah-Jones wrote: "No aspect of the country that would be formed here has been untouched by the years of slavery that followed."

"The 1619 Project" essays began appearing in the August 14, 2019, issue and quickly became big news. The special issue was popular, widely heralded but also attacked and dismissed. Some historians, for instance, denied that the American Revolution was fought to preserve slavery in the colonies. The Times reprinted the series in the newspaper and produced a multi-episode podcast with the same title. And in the spring of 2020, Hannah-Jones received a Pulitzer Prize for Commentary for the work.

In June after the May 25, 2020, "lynching" of George Floyd, as Hannah-Jones told her Notre Dame audience, she was amazed to see the Black Lives Matter movement growing everywhere — even in white communities. "You started to see things that hadn't happened before — like NASCAR suggesting that maybe people shouldn't be driving NASCAR cars with the Confederate flag." This journalist thought that a new understanding of what racism really means might be emerging.

"I kept thinking that I should write something about that," she said. "I had always thought that so much coverage of racial inequality was superficial. No one was talking about why Blacks were suffering as if their suffering came out of nowhere. Slavery wasn't created as a racist system; it was an economic system. Slavery was founded to exploit human beings for labor."

Her article "What Is Owed" soon appeared in The New York Times Magazine and methodically presented the history of economic injustices that Black Americans had endured for centuries. She made the case for reparations. She sensed that this could be a moment of national reckoning.

Looking back at all of this at Notre Dame, Hannah-Jones admitted that the controversy generated by her work has sometimes been overwhelming.

Her recently released book, The 1619 Project: A New Origin Story, expands on the magazine project and is facing some of the same firestorms of criticism.

But Notre Dame could see that Hannah-Jones is at peace with her work.

"There's never been anything published in the last 10 years that has been this scrutinized," she said. "And history is not just what happened on certain days and who did it. History is also interpretation and human beings are doing the interpreting. Much of what people dislike about 'The 1619 Project' is its point of view. They have their own worldview about America. Even some historians believe in American exceptionalism. What's beautiful about the book is that it has 1,000 endnotes. Don't argue with me! Argue with the historians."