In wake of net neutrality ruling, Catholic leaders encourage cautious use of the Internet 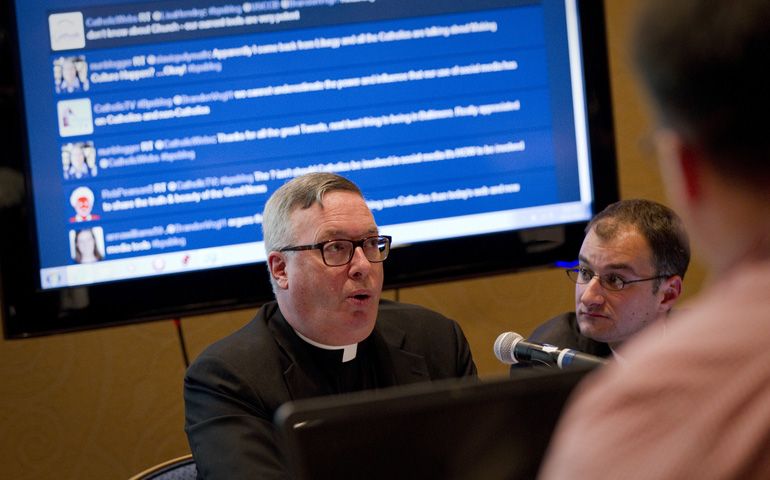 Bishop Christopher Coyne of Burlington, Vt., and blogger Rocco Palmo of "Whispers in the Loggia" facilitate a discussion between U.S. bishops and Catholics active in social media Nov. 11, 2012, at a USCCB meeting in Baltimore. (CNS/Nancy Phelan Wiechec)

Late last month, the Federal Communications Commission ruled on the question of net neutrality. The FCC decision ensured that broadband providers like AT&T and Comcast could not charge for better or worse access to the Internet.

In essence, the FCC declared the Internet would remain open and free, a public utility available to all.

It was a decision the Catholic church strongly supports. But a closer look at Catholicism's view of the Internet reveals a somewhat strained relationship, some of it positive, some of it negative -- a relationship that moving forward is largely uncertain.

In a statement supporting the FCC decision, Bishop John Wester of Salt Lake City, chair of the U.S. bishops' Communications Committee, called the Internet "a critical medium for religious speech."

"From the inception of the Internet until the mid-2000s, Internet service providers were not permitted to discriminate or tamper with what was said over those Internet connections," he said. "Today, the FCC restores this protection for speakers, protection particularly important to noncommercial religious speakers."

In many ways, the church embraces the Internet, such as the pope's use of Twitter. But in others, it would appear Catholicism takes a more halting approach to life online.

Does "new media help or hinder the creation of genuine community?" asked Chicago Archbishop Blase Cupich at a February event unveiling a new Loyola University Chicago pastoral studies program with a concentration in digital communication. "The experience so far is ambiguous."

So what is the Catholic view of the Internet?

Coyne, who is the chairman-elect of the USCCB's Communications Committee, added that the Internet poses a "challenge for communities that involve face-to-face relationships, like parishes."

People are "developing habits," he said, whereby they "communicate at a longer distance ... through the use of social media."

"What kind of effect that is going to have on our faith communities remains to be seen," he said.

To the question of the Internet's effect on human culture, Daughters of St. Paul Sr. Rose Pacatte, director of the Pauline Center for Media Studies in Los Angeles, called Catholic teaching on communications and media one of church's "hidden gems."

"There is a treasure trove of stuff," she said -- much of which can be found in documents emanating from the Vatican's Pontifical Council for Social Communications.

One of the council's most forceful documents is called "Ethics in Internet," Pacatte said.

The 2002 document states: "Today it takes no great stretch of the imagination to envisage the earth as an interconnected globe humming with electronic transmissions -- a chattering planet nestled in the provident silence of space. The ethical question is whether this is contributing to authentic human development and helping individuals and peoples to be true to their transcendent destiny."

"In this document we wish to set out a Catholic view of the Internet," it reads, "as a starting point for the Church's participation in dialogue with other sectors of society, especially other religious groups, concerning the development and use of this marvelous technological instrument. The Internet is being put to many good uses now, with the promise of many more, but much harm also can be done by its improper use."

"Fundamentally," the Vatican document does "not view the Internet only as a source of problems." It sees it as a "source of benefits to the human race." But only if these problems are solved, problems that include "the digital divide -- a form of discrimination dividing the rich from the poor, both within and among nations, on the basis of access, or lack of access, to the new information technology" and problems that touch on the "cultural dimensions of what is now taking place."

In the years since "Ethics in Internet" was published -- which saw the advent of social networking services like Facebook, Twitter and Instagram, enabling people to "live" online -- papal World Communications Day messages have furthered the church's thinking on the "cultural dimensions of what is now taking place."

In a 2012 message, Pope Benedict XVI wrote about the value of silence as an aspect of communication:

Silence is an integral element of communication; in its absence, words rich in content cannot exist. In silence, we are better able to listen to and understand ourselves; ideas come to birth and acquire depth; we understand with greater clarity what it is we want to say and what we expect from others; and we choose how to express ourselves. By remaining silent we allow the other person to speak, to express him or herself; and we avoid being tied simply to our own words and ideas without them being adequately tested. In this way, space is created for mutual listening, and deeper human relationships become possible. ...

When messages and information are plentiful, silence becomes essential if we are to distinguish what is important from what is insignificant or secondary. Deeper reflection helps us to discover the links between events that at first sight seem unconnected, to make evaluations, to analyze messages; this makes it possible to share thoughtful and relevant opinions, giving rise to an authentic body of shared knowledge. For this to happen, it is necessary to develop an appropriate environment, a kind of 'eco-system' that maintains a just equilibrium between silence, words, images and sounds.

In a 2014 address, Pope Francis wrote that "the internet, in particular, offers immense possibilities for encounter and solidarity. This is something truly good, a gift from God."

But "this is not to say that certain problems do not exist," Francis continued. "The speed with which information is communicated exceeds our capacity for reflection and judgement, and this does not make for more balanced and proper forms of self-expression. The variety of opinions being aired can be seen as helpful, but it also enables people to barricade themselves behind sources of information which only confirm their own wishes and ideas, or political and economic interests. The world of communications can help us either to expand our knowledge or to lose our bearings."

Benedict's reference to "equilibrium" and Francis' call for "balance" reflect notions that the academic discipline of media ecology believes to be vital.

Inherent in "the term media ecology is the idea of balance, taken from the balance in the natural environment," said Thom Gencarelli, past president of the Media Ecology Association and founding chair of the "Next Generation" Communication program at Manhattan College.

Gencarelli said the academic debate over the effect of the Internet on culture and society was contentious and uncertain, filled with "celebrants" of new media and those who take a more cautious approach.

"A really important piece of the conversation has to do with the fact that we're talking about an industry of communication and media," he said, "and we lose sight of the fact that what's driving it are not necessarily our own interests."

And to that end, the FCC ruling only "maintains the status quo," Gencarelli said. "Free and open -- to an extent."

Reality is that Internet "is not completely free and open," he said. "I could set up a server in my house and pay the money to have a T2 line going in and out of here. But most people don't do that. Most people who think that the Internet is free and open and are using it as producers are doing so through things like Tumblr or other micro blogs. They're using GoDaddy to purchase their site servers."

"In other words, they're relying on the industrial vehicle to be able to produce this stuff."

But does the Internet impact human development?

"When I look at it, I can't say it's all good with respect to humanity moving forward," Gencarelli said. "What I can say is it's happening, we're going to move forward with it."

Culture | In wake of net neutrality ruling, Catholic leaders encourage cautious use of the Internet