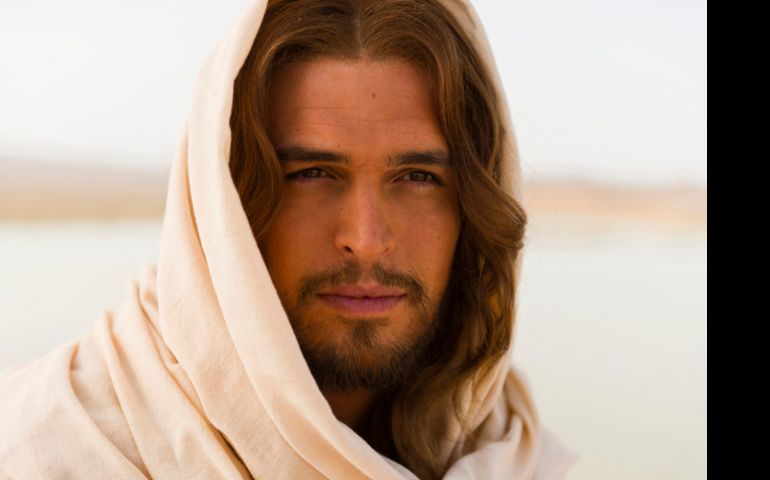 Diogo Morgado stars in a scene from the movie "Son of God." The upcoming movie should be seen as "a love story," according to two of its executive producers, the husband-and-wife team of Mark Burnett and Roma Downey. (CNS/Fox)

The first half of “Son of God” features an upbeat and kindly Jesus spreading the good word in familiar, if occasionally over-simplified, biblical phraseology.

Then things get bloody — thought not quite as graphic as in 2004′s “The Passion of the Christ” — when Jesus is seized, beaten and crucified. The production values are modest and the special effects uneven in this PG-13 repurposed and condensed version of the History Channel’s miniseries “The Bible.”  (That series drew flack for casting an actor who resembled President Obama in the role of Satan. The film sidesteps any hint of controversy by keeping the devil out of this story.)

“Son of God,” which opens Friday (Feb. 28), takes no real chances, opting for a moderately involving re-telling of an oft-told story.

As portrayed by Portuguese actor Diogo Morgado Jesus resembles a brown-eyed Brad Pitt. With his gleaming smile, he has the clean-cut, chiseled good looks of a model, even with the long, wavy hair, dusty robes and beard. Smiling beatifically seems to come easily to Morgado, who at times has a laid-back surfer vibe. It’s undoubtedly a daunting role, and Morgado captures the gentle benevolence associated with the messianic figure. He doesn’t, however, project the authority, gravitas or depth of a spiritual leader.

The rest of the cast is even less vivid. Most have ponderous British accents  – some sound almost Liverpudlian, as if a Beatle accidentally found himself among the Israelites.

The story, which follows Jesus from nativity to resurrection, is essentially a series of greatest-hits miracles. Jesus casually multiplies a loaf of bread and some fish into a feast for a crowd, raises Lazarus from the dead and walks across the surface of a storm-tossed sea in a manner befitting a superhero. It can be argued that Jesus is the ultimate superhero, but this film’s approach seems to trivialize the dawn of Christianity into a top-10 list of exploits and famous phrases.

An irksome voiceover narration by Peter (Darwin Shaw) bookends the film. An overbearing musical score by Hans Zimmer threatens to bombard all of Bethlehem. Speaking of music, “Jesus Christ Superstar” told the story with more excitement, depth and emotion than this overlong epic-lite.

The political dissatisfaction among the Jewish masses is cursorily conveyed. Jesus’ crucifixion is depicted powerfully, but his ascension to heaven is less effective, enacted in a borderline cheesy, ghostly fashion. The story appears to come to a conclusion a few times before the credits finally roll. It tacks on a series of montages, highlights of the most prophetic moments that came before, as if to underscore a message already made clear.

As directed by Christopher Spencer and co-produced by Mark Burnett and his wife, Roma Downey (who blandly plays Mary, the mother of Jesus), the focus is on Jesus’ teachings. Christ’s final words are filled with prophecy: “I am coming soon. May the grace of the Lord be with all God’s people.”

The story of Jesus and his disciples and those in power who were threatened by his message of love and humility is undeniably compelling. A sense of perspective, beyond the overt evangelism, however, is missing. That one man and a few true believers could spawn a worldwide religion that shaped civilization is truly astounding.

Pentecost a time to awaken excitement, joy about Jesus' message