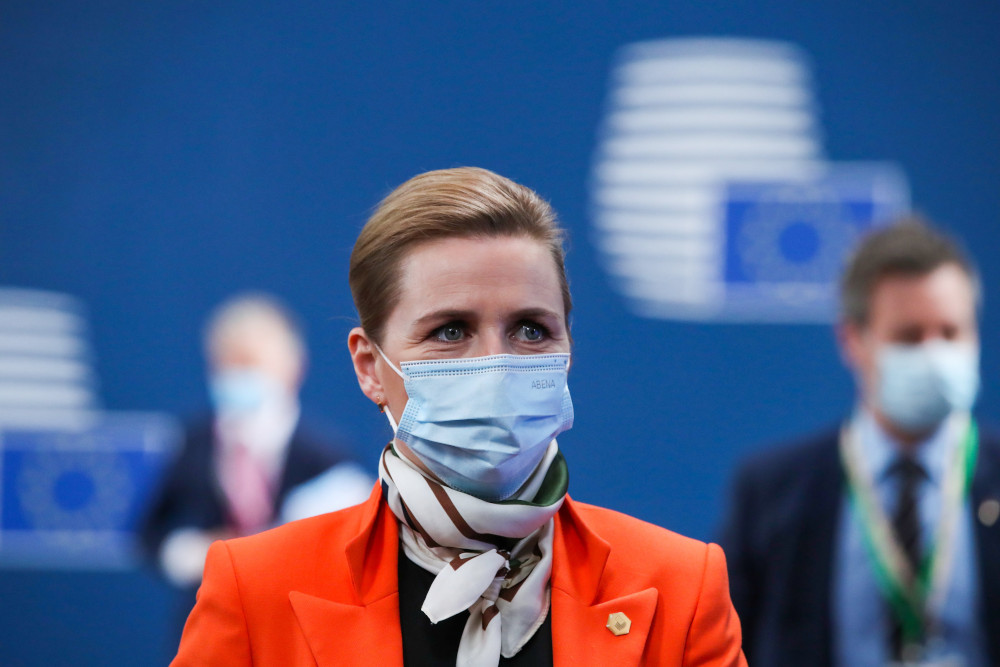 Denmark Prime Minister Mette Frederiksen, wearing a protective mask, arrives at an EU summit in Brussels Dec. 10, 2020, during the COVID-19 pandemic. Catholic officials in Denmark have joined others in criticizing draft legislation that would require all sermons and homilies to be translated into Danish. (CNS photo/pool via Reuters/Yves Herman)

A spokeswoman for Denmark's Catholic Church said draft legislation requiring all sermons and homilies to be translated into Danish will fuel ill-feeling and damage religious freedom.

"This law is directed primarily at Muslims — its proponents say they want to prevent parallel societies and things being preached which no one else understands and could be used for radicalization and calls for terror," said Precious Blood Sr. Anna Mirijam Kaschner, general secretary and spokeswoman of the Nordic bishops' conference.

The legislation was scheduled to be debated in February in the country's parliament.

Kaschner said the law would require religious communities, including the Catholic Church, to translate and publish every sermon, posing "enormous personal and financial challenges," adding that its drafters appeared unaware that sermons formed "only a very small part" of religious activities.

"If you really want to tackle problems of hate speech and attitudes to the democratic state, it's much better to show appreciation for faith communities who are committed to integration," said Kaschner.

"This law is only the latest in a long series of control measures by the state," she said. "It will have no consequences for radical Muslim religious communities, since they're not even recognized here, but it will affect smaller communities, including the Catholic church."

The Catholic Church makes up around 2% of the 5.8 million inhabitants of predominantly Lutheran Denmark. The Diocese of Copenhagen includes Danish-administered Greenland and the Faroe Islands.

The country is home to 270,000 Muslims, with more than 100 mosques, according to Danish government data.

Critics of the draft law called for Denmark's Greenlandic and Faroese communities, whose languages are recognized by the United Nations, to be exempt from the translation requirement.

Danish Prime Minister Mette Frederiksen told legislators in November she could not promise the languages would be exempt.

Church leaders and human rights groups have also criticized legislation obliging religious associations to submit annual accounts and identify donors of $3,000 or more, and a 2017 law requiring personnel conducting weddings, including Danish-born Protestant and Catholic clergy, to take a course in "understanding democracy and freedom."

The country's Council of Churches, whose 58 member-groups include the Catholic Church, said Dec. 17 the "discriminatory and ill-considered" law on sermons reflected a "suspicion of denominations across a broad spectrum" and would cost non-Danish congregations $6.2 million annually, imposing "significant burdens on economically weak minority churches for no reason."