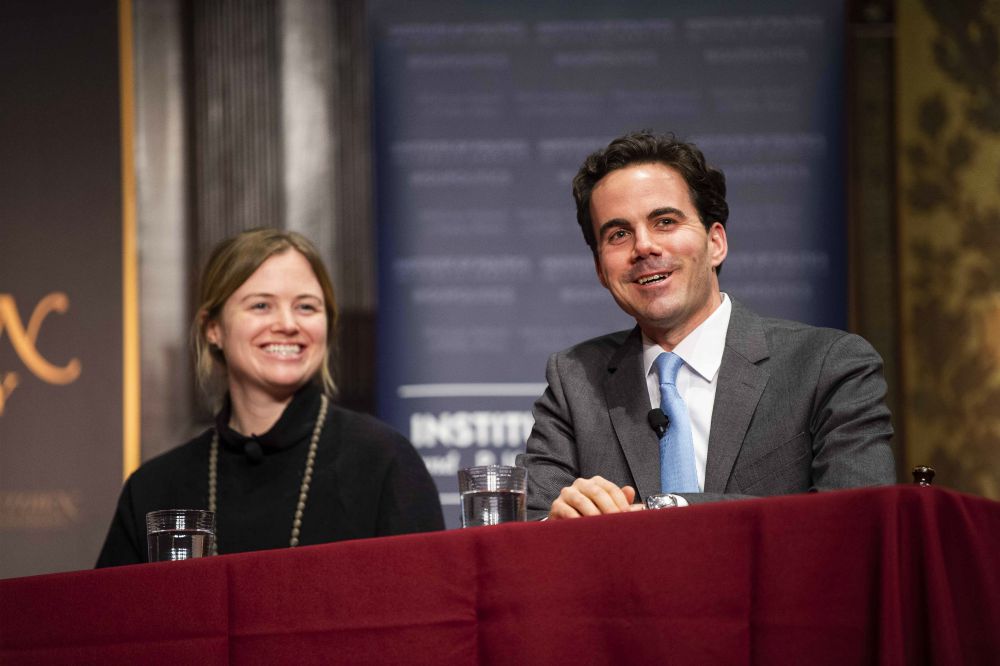 Two journalists, a wonk, a statistician, and a former employee of the U.S. Conference of Catholic Bishops gathered on stage at Georgetown University November 19. It sounds like the set-up to a bad joke, but it was actually an attempt to make sense of this month's midterm elections through the lens of religion.

How divided are Catholics and how race affects politics were issues of particular interest covered in the 90-minute conversation, as well as what is going to happen in the 2020 general election. Spoiler alert: Nobody knows the answer to the last question.

"Faith and the Faithful in the Midterm Elections" was another in a series of talks sponsored by the university's Initiative on Catholic Social Thought and Public Life. Robert Costa of The Washington Post and Elizabeth Dias of The New York Times shared their observations of the campaign trail while Ana Gonzalez-Barrera, senior researcher at the Pew Research Center, and her colleague Gregory Smith, associate director of research, put it all in the context of numbers and data.

John Carr, Catholic social thought initiative founder, presided over the proceedings with his usual wit and insight, at one point quipping that with the current divide not only between liberals and conservatives, but among the Catholic faithful, "It's going to be very interesting to be a pastor in the U.S., and to see how priests and bishops navigate these waters."

That divide was the subject of much discussion, including a question from an audience member about how so many members of the current administration could claim to be Catholic but act otherwise.

60 percent of Republican Catholics believe poor people in the U.S. have it easy because they can get government benefits without doing anything in return.

Pew research shows U.S. Catholics to be as divided among themselves as other people in the country. According to Smith, six in 10 Republican Catholics believe poor people in the U.S. have it easy because they can get government benefits without doing anything in return, and two-thirds say government assistance does more harm than good, attitudes, he said, that "run contrary to the social teachings of church."

But their findings also show that seven in 10 Catholic Democrats believe abortion should be legal in all or most cases. "They do not believe in the church's teaching on this issue," Smith said.

Pew's research also shows that while Catholics went for the Democrat by about 8 percentage points in 2008 and were split just about down the middle in the 2016 general election, in the 2018 midterms, Catholics voted Republican by about 10 percentage points. However, Smith pointed out, there is a catch, and that catch is race.

"If you dig just below the surface, what you see is that the Catholic population in the U.S. is really politically polarized along racial and ethnic lines," he said. "Religious divides really are concentrated among white voters."

Among white Catholics, according to Pew data, about 54 percent lean Republican and 40 percent lean Democrat. More-religious people tend to vote for Republicans, and those who identify as less-religious tend to vote for Democrats, but that holds truly only among whites. African-Americans and Latinos tend to be deeply religious and lean heavily Democratic in their approach to politics.

Smith added that religiously, white evangelicals and minorities have a lot in common while politically, "they couldn't be further apart."

Dias added that she spoke to many young evangelical mothers in Texas who were profoundly affected by the separation of families at the border. Many said they were supporting Beto O'Rourke in his effort to unseat Sen. Ted Cruz (R), although they wouldn't tell their husbands.

"They told me that to put a Beto sticker on their car and drive it to church felt like a huge act of rebellion," Dias said.

The Times received more than 1,500 responses from young evangelicals when it recently put out the call for them to talk about politics and religion.

"They felt they had no outlet for their feelings," Dias said.

As for Latinos, they currently make up one-third of American Catholics and are a growing demographic. But their voter turnout rates have historically been low, Gonzalez-Barrera said.

"Latinos tend to be very young, and young people vote less," she said by way of explanation.  "Almost half are millennial, and about one-third are younger than that." In total, roughly two-thirds of American Hispanics are under the age of 35, and they made their voices heard this year in the battleground states of Arizona and Florida, Gonzalez-Barrera said.

Costa had several observations from his travels around the country since the 2016 election. Calling the relationship between Trump and evangelicals "transactional," he said the Brett Kavanaugh Supreme Court confirmation fight confirmed for him that the courts are the new battleground for Republican voters, as well as state legislatures, where they believe the abortion issue may ultimately land.

The president speaks to the conservative desire to finally have a winning candidate who can get things done for them, whether or not they find him personally distasteful, Costa said.

"Trump recognized that religious voters didn't care if candidates were like them. They wanted power," Costa said, distilling the issue to what, for him, was its essence. "What I've learned as a political reporter is power unites," in a way that the virtue signaling of the left does not.

Summing up the evening's conversation, Carr said he had three takeaways: that Latinos will be neglected at the Democratic party's peril; that there are cracks in the evangelical consensus among women and young people; and, quoting his friend and former panelist, Washington Post columnist E.J. Dionne, "There is no Catholic vote, and it's really important."