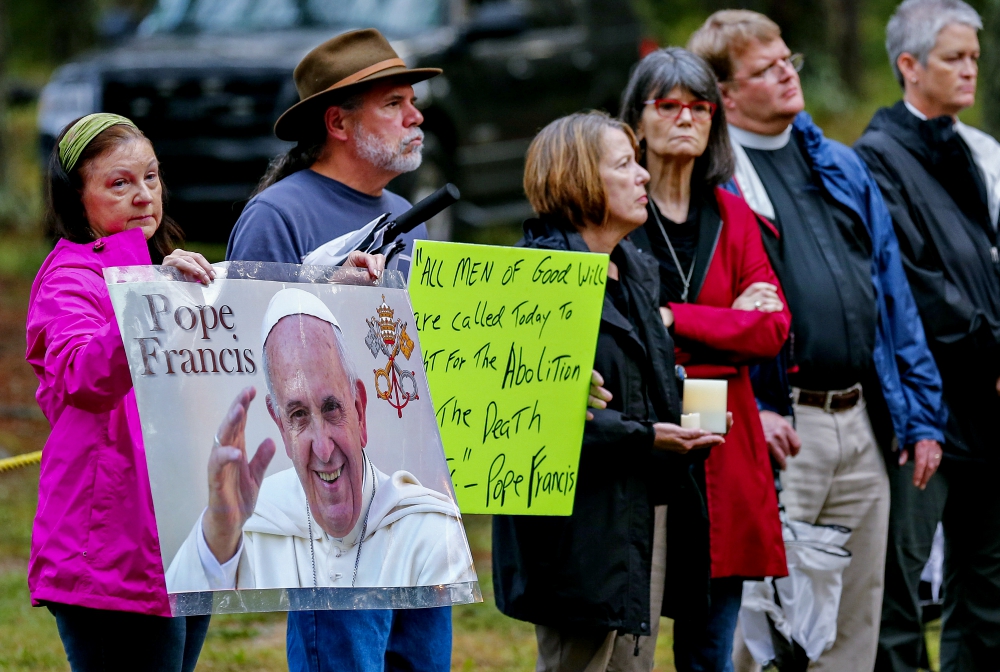 Death penalty opponents hold posters referring to Pope Francis as they stand outside the Georgia Diagnostic Prison in Jackson before the execution of Kelly Gissendaner by lethal injection in 2015. (CNS/EPA/Erik S. Lesser)

Editor's Note: This story was updated at 10:15 a.m. Central time with a statement from the U.S. bishops' conference.

As news broke Aug. 2 of Pope Francis' decision to revise and clarify the Catechism of the Catholic Church's teaching on the death penalty, a variety of Catholic and secular organizations are offering their reaction to the changes.

Krisanne Vaillancourt Murphy, executive director of Catholic Mobilizing Network, a national organization that helps advocate and educate on the death penalty, called the decision a "capstone teaching moment for the Catholic Church."

"For people in the pews, it is a challenge to actively build a culture of life by abolishing the death penalty, especially in the 31 states that still have it on the books in this country," Vaillancourt Murphy said in a statement.

Included in the statement was a quote from Catholic anti-death penalty advocate Vicki Schieber, whose daughter Shannon was murdered in 1998.

"I was ecstatic because it is so important that victims' families have strong support from our faith leaders to end the death penalty. Shannon's birthday is in six days, and I have no doubt that she is smiling from ear to ear saying, 'Go Mom! Let's get it done!' " Schieber was quoted saying in the statement.

Vaillancourt Murphy also "asserted" that "today's action further clarifies any remaining ambiguity about the Church's teaching against the death penalty."

The catechism previously stated that the death penalty is admissible if the sentence is deemed the only way to defend "human lives against the unjust aggressor." It went on to a quote from Pope John Paul II's encyclical Evangelium Vitae, stating that cases where the state is unable to protect the people from the perpetrator is "very rare, if not practically nonexistent."

The clarification will now state the death penalty is "inadmissible" and the church "works with determination for its abolition worldwide."

"There is an increasing awareness that the dignity of the person is not lost even after the commission of very serious crimes. In addition, a new understanding has emerged of the significance of penal sanctions imposed by the state. Lastly, more effective systems of detention have been developed, which ensure the due protection of citizens but, at the same time, do not definitively deprive the guilty of the possibility of redemption," the new text will state.

Part of the revisions come verbatim from Francis' earlier statements. In October 2017, Francis told meeting participants on the 25th anniversary of the catechism: "It is necessary, therefore, to reaffirm that no matter how serious the crime that has been committed, the death penalty is inadmissible because it is an attack on the inviolability and the dignity of the person."

"Here we are not in any way contradicting past teaching, for the defense of the dignity of human life from the first moment of conception to natural death has been taught by the Church consistently and authoritatively. Yet the harmonious development of doctrine demands that we cease to defend arguments that now appear clearly contrary to the new understanding of Christian truth," Francis said at the October meeting.

In a statement released Aug. 3, the U.S. Conference of Catholic Bishops said "we welcome the Holy Father's decision to revise the Catechism and its explanation of the Church's teaching on the death penalty."

"All human beings are created in the image and likeness of God, and the dignity bestowed on them by the Creator cannot be extinguished, even by grave sin, such that all persons, from conception until natural death possess inalienable dignity and value that points to their origin as sons and daughters of God," said Bishop Frank Dewane, chair of the bishops' Committee on Domestic Justice and Human Development.

Dewane, bishop of the Diocese of Venice, Florida, said Francis' revision of the catechism is consistent with his past statements, including to the U.S. Congress in 2015, and with the teachings of Popes Benedict XVI and John Paul II, as well as the U.S. bishops' decades-long call for the abolition of the death penalty.

"It is our hope that today’s announcement will bring new attention to this critical issue," Dewane said, "and speed along the end of this practice, which, as Pope Francis has said, in the light of the Gospel, is 'inadmissible because it is an attack on the inviolability and dignity of the person.'"

"Pope Francis is building on opposition to the death penalty that began with Pope John Paul II, who spoke about the dignity of guilty life as well as innocent life and described executions as cruel and unnecessary," she stated. "I've been glad to play a part in these developments."

Though Prejean called the announcement "important and ... wonderful," she noted, "These are still just words on a page.

"Words must be followed by action. It's time to abolish state-sponsored killing forever," she said.

Robert Dunham, executive director of the Death Penalty Information Center, told NCR in an email that the church's "unequivocal opposition to the death penalty in all circumstances" could be the impetus for real change. Dunham said it's possible the revisions could have an impact in many states, including "Washington, Utah, and Louisiana to support abolition, and may influence New Hampshire efforts to override Governor [Chris] Sununu's veto of the legislature's death-penalty repeal."

"Legislation to abolish capital punishment is close to passage in several states in which Catholic legislators will cast key votes," Dunham said just prior to his Aug. 2 panel at the American Bar Association's national meeting where he was to discuss the death penalty with Chicago Cardinal Blase Cupich.

"It will also be interesting to see what effect this has on Catholic prosecutors and judges. The four strongest supporters of the death penalty on the U.S. Supreme Court are conservative Catholics, and this will certainly give them something to think about when they look at whether various death-penalty practices in the United States as morally and legally defensible." 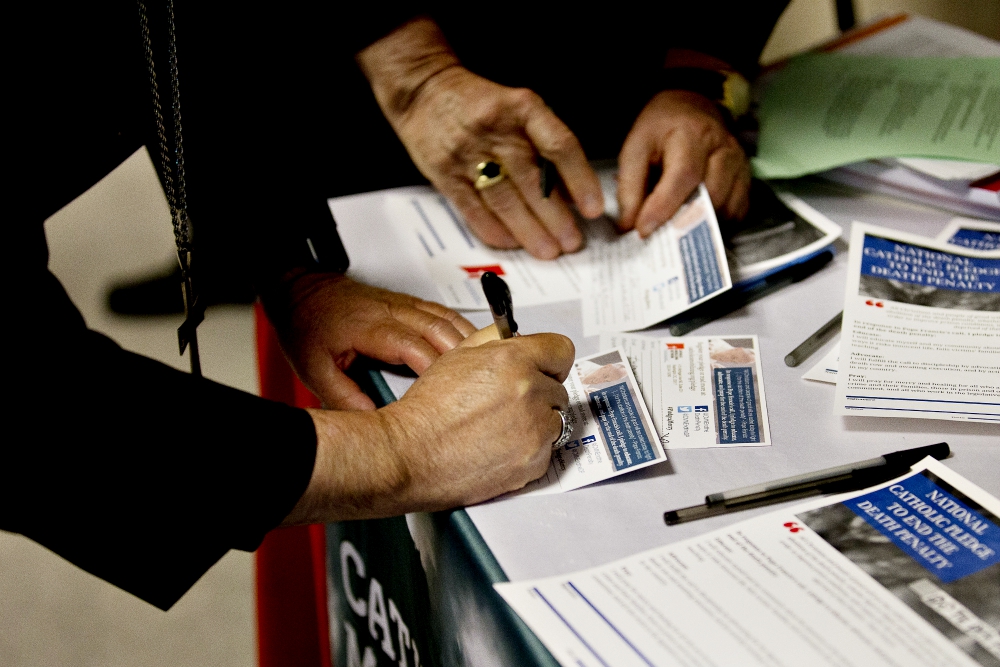 Bishops sign pledges to end the death penalty at the U.S. Conference of Catholic Bishops building in Washington in May 2017. (CNS/Tyler Orsburn)

While Social Service Sr. Simone Campbell, executive director of Network, told NCR that the clarification gives her "joy," she is skeptical that it will contribute to governmental change.

"I doubt that politicians will change their tune because of this but we will continue to advocate that they will," Campbell said. "You know the problem is [that] politicians often appear to claim faith for political reasons. I believe they must have good, faithful hearts but they see it as an individualism."

But Campbell said she does find it "a really important step to underline the dignity of all people, of all human beings."

"We are all connected. We're one body and have the dignity of God among us and so therefore we need to respect that dignity and stop this cruelty to all those who are vulnerable in this time," she said.

Though many death penalty organizations are secular in nature, many have a large constituency of people of faith, including Conservatives Concerned About the Death Penalty. National manager Hannah Cox told NCR that the "church's official teaching is going to be a huge encouragement to the many people of faith that we work with across this country who have already decided the sentence does not align with their values."

"We have many Catholics that are involved in our work in states all over this country and so I know this is very meaningful for them and we're happy to see this public stance being taken by this denomination," she said.

This may also be a turning point for Catholics and people of faith who were previously undecided on the sentencing, Cox said.

"Once people start looking into the facts around the death penalty, it becomes really apparent that this is an unworkable system ... and when you think about those facts, coupled with innocence issues in the system, the extraordinarily high cost to prevent us from going after all crimes fairly, and then just the fairness concerns of who gets the death penalty and who does not, I think those are reasons that so many conservatives and Christians are becoming opposed to the death penalty," she said.

Brian Stull, senior staff attorney at American Civil Liberties Union — which advocates against the death penalty — told NCR in an email that the announcement "put big winds in our sails."

"The Pope's recognition of signature flaws with the American death penalty is particularly significant. He ... cited our nation's history of botched executions, a history bound to repeat itself as states use increasingly experimental lethal-injection protocols to execute. We couldn't agree more," Stull said on behalf of the ACLU.

On a personal note, Stull, who is Catholic, said he was "grateful for the Pope's declaration."

"The Pope teaches us that it is wrong to take any life, even that of a person who has committed grave crimes. The Pope's compassion for and forgiveness of prisoners is a model all too often lacking in our hardened world," Stull added.

Gregory Joseph, director of communications for the National Coalition to Abolish the Death Penalty also told NCR in an email that "the death penalty is cruel and beneath our collective humanity. We are heartened that Pope Francis has approved changes in Church teachings on the death penalty. ... These words express the heart and soul of our struggle. We like the Catholic Church affirms today, pledge to work with determination until the death penalty is abolished worldwide."

[Kristen Whitney Daniels is assistant director of the U.S. Federation of the Sisters of St. Joseph and a former NCR Bertelsen intern.]

A version of this story appeared in the Aug 24-Sept 6, 2018 print issue under the headline: Death penalty teaching revised.