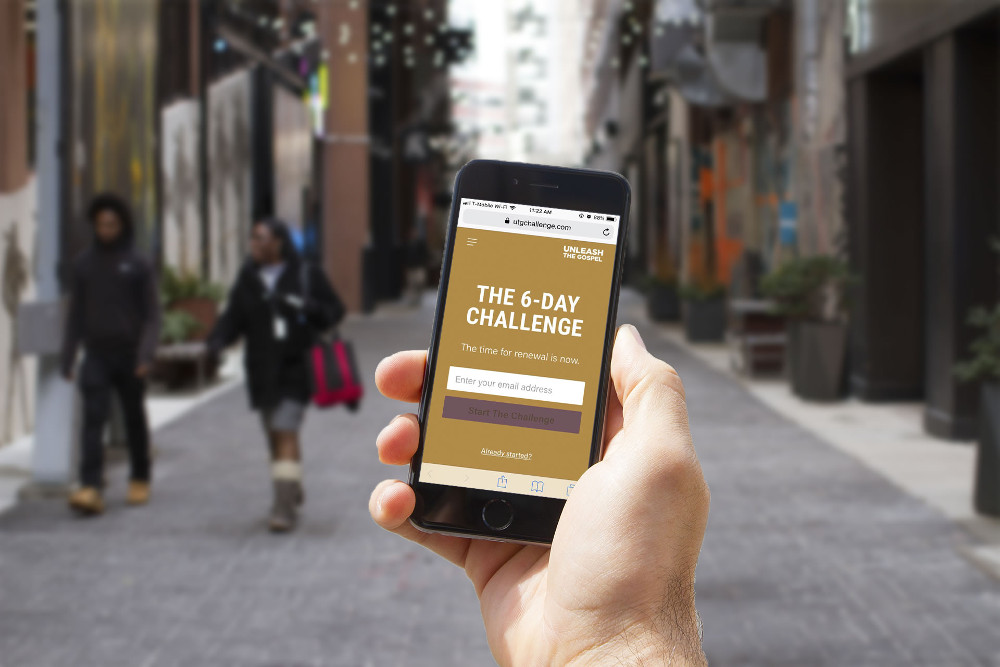 In this photo illustration, a person holds a cellphone with the "Unleash the Gospel Challenge" website displayed. (CNS illustration/courtesy Detroit Catholic)

What began as a rallying cry for the Archdiocese of Detroit is slowly building into a full-fledged missionary movement called "Unleash the Gospel."

Inspired by Detroit Archbishop Allen Vigneron's 2017 pastoral letter on the missionary transformation of the archdiocese, the movement was being launched at parishes in southeast Michigan the weekend of Nov. 3-4.

It is serving to help the faithful continue in what diocesan leaders called a journey of transformation and spiritual renewal centered on Jesus and the life-changing message of the Gospel.

Hundreds of volunteers were to be dispatched to all 218 parishes. The volunteers were commissioned to encourage parishioners to take up the mission of renewal through a six-day challenge.

The challenge, which includes a digital component, asks Catholics to devote five minutes per day to learn and pray about what it means to be a church on mission filled with joyful, missionary disciples.

"We have heard the Holy Spirit speak clearly of God's missionary plan for our archdiocese. We are called to go back to the original mission of the church and to share the good news of the Gospel — to unleash the Gospel — throughout southeast Michigan and beyond," Vigneron said in a statement.

"It is with a renewed spirit of hope and faith in the Lord Jesus that I invite the faithful throughout the archdiocese to embrace this mission and walk with us this path to the kingdom of God," he said.

At the core of the initiative, which follows the 2016 archdiocesan synod on evangelization, is the need to make the message of salvation readily accessible and available to a culture that often seems to have forgotten Jesus, said Fr. Stephen Pullis, archdiocesan director of evangelization, catechesis and schools.

" 'Unleash the Gospel' really is a missionary movement of the Holy Spirit that seeks to invite people to consider how God might be active in our age," Pullis said. "It's not enough to simply say we believe in Christ. We need to equip evangelizers by inviting people to become joyful, missionary disciples and learning how to share that message with others."

In a sense, he explained, the movement is about returning to the church's roots of proclaiming the "kerygma," or the initial, basic message of salvation: that humans were created in God's image, man and woman betrayed God's friendship through sin, and Jesus Christ was sent to repair that relationship through his saving death and resurrection.

The initiative also was designed to teach people to live that basic message of salvation as being true — which includes sharing that Gospel with others.

The archdiocese planned to do that through a multi-pronged effort that includes an overhaul of the way the church communicates and engages with the faithful, said Edmundo Reyes, director of communications.

" 'Unleash the Gospel' is a movement," Reyes said. "Think about what a movement is. At its core, a movement is when something is wrong that needs to be right, and enough people know about it and are willing to do something about it."

In introducing the initiative and its digital components, 550 volunteers were to visit parishes. Reyes said it was crucial to meeting people on the "digital continent."

It succeeds the archdiocese's newspaper, The Michigan Catholic.

In 2019, the archdiocese plans to launch a separate magazine and online evangelization and faith-formation platform centered on "Unleash the Gospel."

The archdiocese also planned to introduce a podcast in November and make resources available to parishes to help parishioners becoming bold Christian witnesses.

Matthew Hunt, a youth minister at St. Isidore Parish in Macomb, was to be among the volunteers visiting parishes. He said he is excited about the possibilities the initiative creates.

"Not everyone knows what Unleash the Gospel is, but if we do this right, it's going to be huge," Hunt told Detroit Catholic.

Susan Wit of St. Hubert Parish in Harrison Township said it is inspiring to see the Catholic Church taking a lead in using modern communication tools.

"It seems like we're always two steps behind because there's always something new that the young people are into that we don't know about yet," said Wit, another volunteer. "I think it's a good starting point to get people interested and aware. We're the jumper cables to get people excited about it."

Reyes said part of the weekend's challenge is helping people to see "Unleash the Gospel" not as a letter, which will unavoidably age with time, but as a Spirit-led transformation of the archdiocese.

[Mike Stechschulte is editor-in-chief of Detroit Catholic, the digital news service of the Archdiocese of Detroit.]