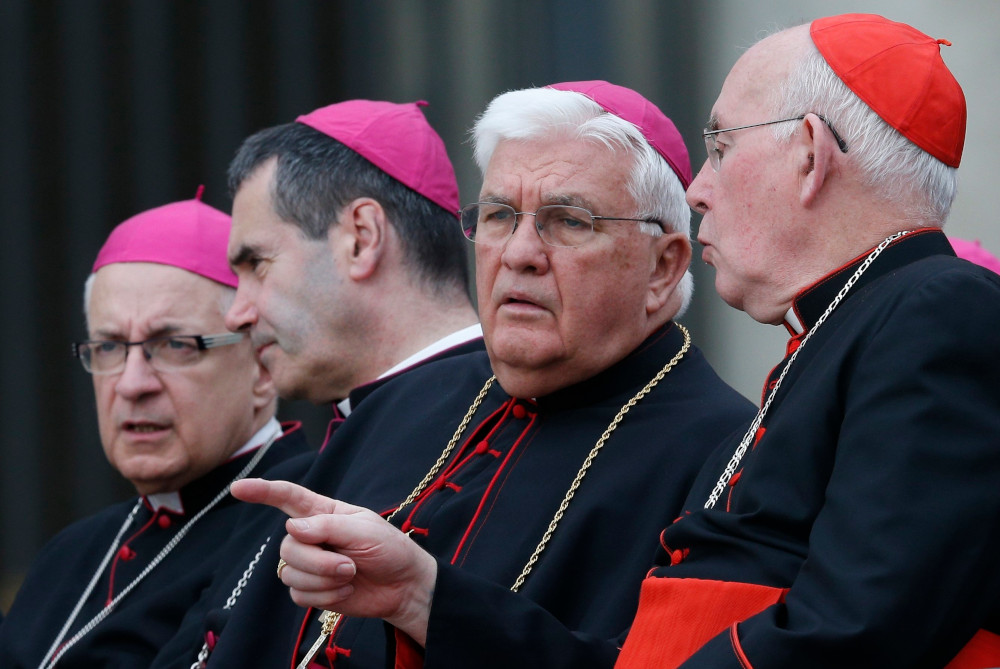 Bishop John M. Quinn of Winona-Rochester, Minn., center, is seen at the Vatican Oct. 15, 2014. The diocese announced Feb. 10, 2021, it had reached a $21.5 million settlement with a creditors' committee representing 145 survivors. The agreement allows the diocese to submit a plan of reorganization under its Chapter 11 bankruptcy proceedings to the U.S. Bankruptcy Court for approval. (CNS/Paul Haring)

The Diocese of Winona-Rochester, Minnesota, has reached a $21.5 million settlement with a creditors' committee representing 145 survivors of clergy sexual abuse, the diocese said in a Feb. 10 statement.

"It is my desire and hope that the compensation paid in this settlement will help the survivors heal from the pain they have felt over these many years," said Bishop John M. Quinn. "We must never forget the tragic anguish caused by individuals who abused their power and positions of authority."

The settlement includes resolution of claims against parishes, schools and other Catholic entities in the diocese. It will allow the diocese to submit a plan of reorganization under its Chapter 11 bankruptcy proceedings to the U.S. Bankruptcy Court for approval.

The diocese filed a petition under Chapter 11 reorganization in November 2018. Since then, under supervision of the Bankruptcy Court, the diocese has worked to resolve claims that were filed when the civil statute of limitations on historical childhood sexual abuse claims was lifted in Minnesota for a three-year period that ended in May 2016.

"On behalf of the diocese, I want to express my sincere apology to all those who have been affected by sexual abuse in our diocese," Quinn said. "I pledge my continuing commitment to ensure that this terrible chapter in the history of the Diocese of Winona-Rochester never happens again."

In a letter to the faithful of the diocese, the bishop also said: "I want to affirm the deep and abiding faith of the people of the diocese. Your faith inspires me and I am grateful for how you continue to live out that faith, and the many ways you support your parish and diocese."

"I'm deeply grateful for the love and trust you have for our priests who are serving the church faithfully and who work daily to protect our youth. Blessed are you," Quinn added.

Ruff is news editor of The Catholic Spirit, newspaper of the Archdiocese of St. Paul and Minneapolis.