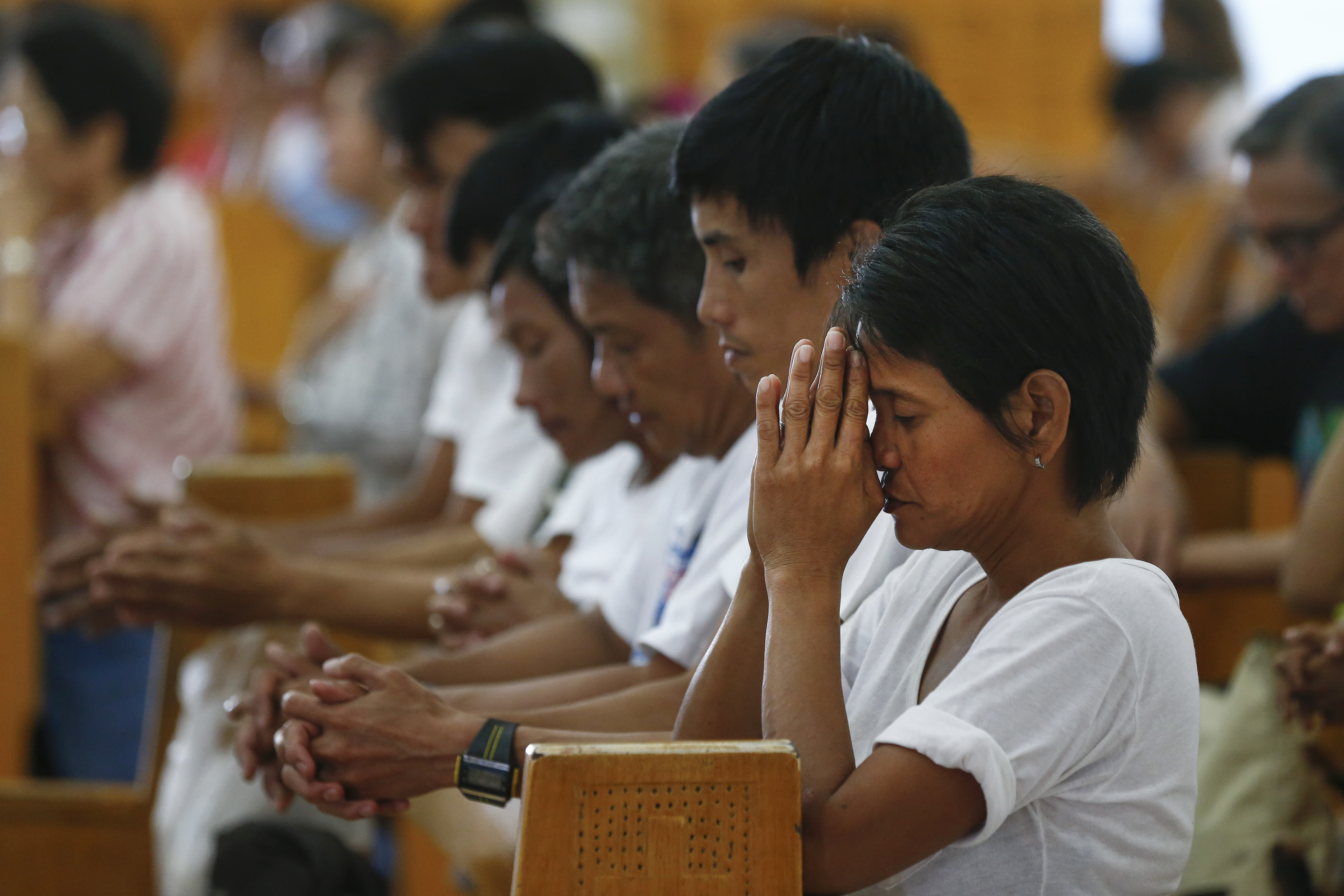 Filipinos pray during Mass in 2017 at a Catholic church near Manila. Philippine President Rodrigo Duterte renewed his attacks on Catholic leaders and urged Filipinos to stop going to church altogether, but church leaders dismissed his comments. (CNS/Rolex Dela Pena/EPA)

The president, who earlier this year called God "stupid," suggested in a Nov. 26 speech that people should instead build their own chapels where they can pray, ucanews.com reported.

"You don't have to go to church to pay for these idiots," said Duterte referring to bishops who have condemned the wave of drug-related killings in the country.

Duterte's tirade against church leaders came days after he accused Bishop Pablo Virgilio David of Kalookan of giving church donations to his family. He offered no supporting evidence for his accusation.

"You, David, you be quiet. You go on asking for contributions. ... Where does the people's money go?" the president said Nov. 22.

"You know, the truth is, I tell you, the offerings, the pineapple, avocado, bananas, where do they go? You want to know? I will show you. To his family," Duterte said.

"The fool just keeps on asking -- there is even a second collection," he added.

David, a vocal critic of drug-related killings in the Philippines, said "people who are sick sometimes do not know what they are talking about."

Earlier this month, the bishop asked the public to pray for Duterte because he is a "very sick man." He made the statement after the president called saints "fools" and "drunkards."

David's pronouncement seemed to anger the president. Duterte said Nov. 26 that he thought that the bishop might be into drugs. "I'm telling you, David. I wonder why he goes around in the evening. I suspect that he might be into drugs," he said.

Reacting to Duterte's statement, David posted on Facebook: "No sir, I'm not into drugs of any sort, whether legal or illegal. Never been."

"I only help in rehabilitating people addicted to drugs ... Thank God I am not even taking any maintenance drugs yet," the bishop said.

"I only take vitamins with fruit shake blended [with moringa] in the morning. You might want to try it, sir. It will do you a lot of good. God bless you," the bishop added.

"Every Filipino with the right mind should only ignore this nonsense," Bastes said. "I don't want to comment on this crazy idea. I am tired of his stupid remarks."

Bishop Ruperto Santos of Balanga said the president's statement is "very irresponsible and heartless" and could sow division.

In his speech Nov. 26, Duterte lambasted the bishops for believing in an "archaic" church that is only good at making money.

"The Catholic Church and Bishop David are clinging to a belief 3,000 years ago," he said. "How can people 3,000 years ago predict what is happening today?"

Auxiliary Bishop Broderick Pabillo of Manilla said Duterte's ranting "will have no effect."