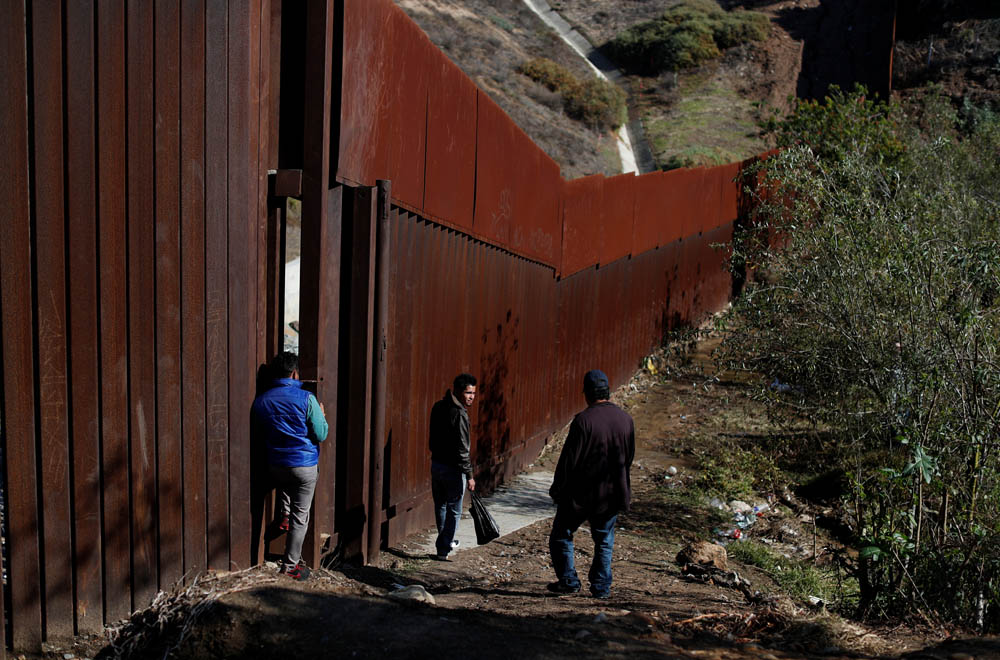 Migrants, part of a caravan of thousands from Central America trying to reach the United States, walk next to the border wall as they try to cross into the U.S. from Tijuana, Mexico. (CNS/Carlos Garcia Rawlins, Reuters)

On the website of National Nurses United, a call by a group of civic and religious leaders in Washington to keep Providence Hospital open. Ascension Health, which owns Providence, cites a lot of citywide data to justify the closure, but people on the ground recognize that D.C. is two cities, and the poor half of the city goes to Providence.

At Politico, reports on the Democratic Party's left and their attempt to erect a Congregation for the Doctrine of the Faith. They want to make sure that anyone claiming the "progressive" label supports "'Medicare for All,' debt-free college and a non-militaristic foreign policy." I propose a name change: Progressives Determined to Re-elect Trump. If debt-free college is the progressives' calling card, they will not only lose, they will deserve to lose. Our taxes should not make it possible for affluent, upper middle-class folk to go to college.

Speaking of idiocy on the left, the campaign to examine everyone's past tweets and make them pass contemporary standards of politically correct orthodoxy, tried to snare newly minted Heisman Trophy winner Kyler Murray who, when he was 14 and 15, sent tweets that included anti-gay slurs. When he was 14. Murray, who is all of 21 now, offered his apology, but instead of making him an ally, I suspect these watchdogs only created some long-term resentment. I am sure he will always remember that on the night he achieved such a singular honor, strangers decided to tarnish his name by resurrecting something he had done as a teenager. News flash: Teenagers are miserable and they say all sorts of horrible things. It is what they do. I also put this in the file "When will people realize that Twitter is a public forum?"

In The Washington Post, Dana Milbank looks at the crazy conspiracy theories about George Soros that circulate regularly on Fox News and have been repeated by the president. I am a fan of much Soros has done to promote freedom of the press in Eastern Europe, but I deprecate his funding of the euthanasia movement in this country. His libertarian beliefs on the left horrify me as do those from the right at the Busch Economics School at Catholic University. But, Trump is trafficking in traditional anti-Semitic tropes here and it is disgusting. Kudos to Milbank who executes a takedown better than anyone else I know.

Deval Patrick, the former governor of the commonwealth of Massachusetts, has announced he will not seek the presidency in 2020. Patrick's tenure was almost uniquely ineffective and apart from the lefty elite cocktail circuit, he is almost entirely unknown. It is best that it stay that way.

In the Los Angeles Times, a report on how poor people in Tecate, Mexico, treated the migrants heading north with decency and respect, living out the parable of the good Samaritan. Compare this with the fear-mongering be perpetrated by wealthy right-wing Catholics like Laura Ingraham.

At RNS, Mark Kellner has a great piece on John Wanamaker, the Philadelphia retailer who was a kind of John the Baptist for today's "prosperity Gospel" crowd, including the RC version led by people like Tim Busch and groups like Legatus. This approach to money was coarse and hoary then and, unlike a good red wine, it has not improved with age.

Over at Crux, my old colleague John Allen tries to lower expectations for the pope's February summit on clergy sex abuse. Much of his analysis is spot-on, but John needs a quick tutorial on the Yalta conference he invokes as a metaphor. Yalta was not a "history-making exercise" as he calls but a huge disappointment at which Stalin made a series of false promises and the U.S. and the Brits were powerless to do anything about it because the fate of Poland and Eastern Europe was being determined on the ground by the Red Army, not by negotiations at the Livadia Palace.