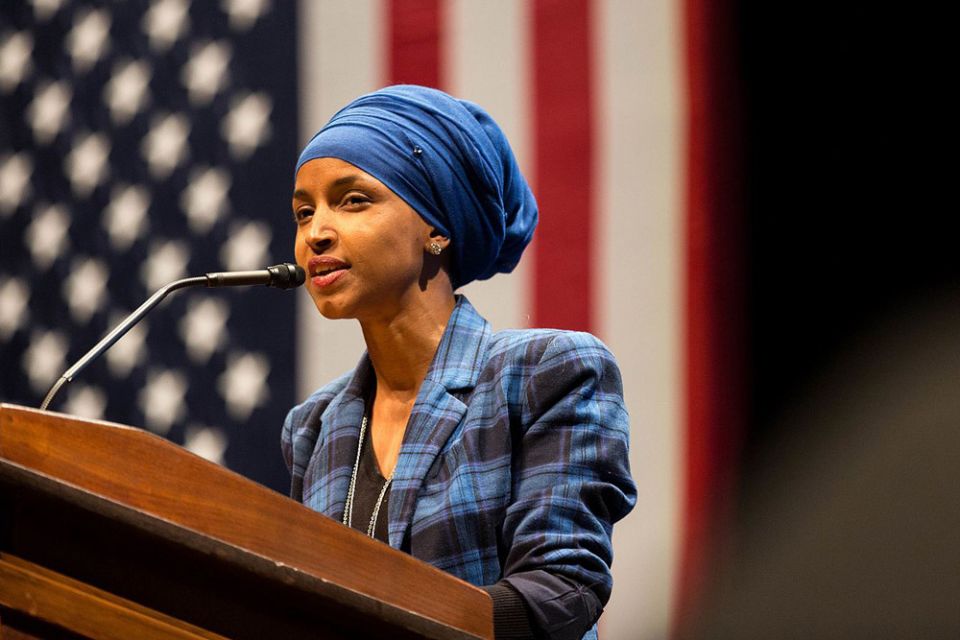 Ilhan Omar speaks October 4, 2016, at a Hillary Clinton for Minnesota event at the University of Minnesota (Wikimedia Commons/Lorie Shaull/CC BY-SA 4.0)

I understand the desire for party discipline, but if Democrats want to lose the 2020 election, they should continue telling moderates to embrace a more liberal platform or they will be challenged in a primary. This article in The Washington Post looks at the latest Inquisition from the Left after some moderate Democrats from rural districts supported a Republican amendment to gun legislation. Healthy parties — and churches — seek converts and unhealthy ones seek heretics. Especially on culturally laden issues like guns or abortion, if liberal Democrats create litmus tests, they will find themselves back in the minority.

On the other hand, while Democrats should tolerate a diversity of opinions about issues, there can be no tolerance for trafficking in the ugliest racial and ethnic bigotries. Rep. Ilhan Omar should be removed from the Foreign Relations Committee after just such trafficking, twice in as many months. This time she accused Jewish-American members of Congress of dual loyalty. Catholics have a dog in this fight: We were the object of a similar charge through the 1960 election.

In The New York Times, a look at Pennsylvania voters who seem to be clamoring for a moderate Democrat to run against Trump. That may be true, but I still can't believe that a major newspaper — the major newspaper — can run such an article and not delve into the fact that people can be moderate on some issues and more liberal (or conservative) on others.

At Politico, Christopher Cadelago pinpoints the challenge facing Sen. Kamala Harris as she makes her bid for the presidency: In her attempts to connect with voters, she tends to over-promise in a vague way, and seems uncomfortable with policy specifics. Bill Clinton was known as "Slick Willy" but he actually was a policy hound and there was no Twitter back then. Campaigns are marathons, and Harris will need to think through the implications of her attempts at empathy if she is going to survive.

Also at Politico, an interesting look at how the large class of freshman Democrats is breaking into sub-groups. "It is like high school," observes one incoming member, which is really, really true. Remember how everyone knew who was at the "cool table" and more than half the class wanted to sit there? That's Congress. Once you are in, and provided you have a relatively safe district, it doesn't matter how you do on the campaign trail. What matters is how you get to the cool table.

At Religion News Service, Mark Silk grades the Vatican's summit on abuse and gives it an incomplete. And he confronts the claims of the naysayers that the church has proven herself incapable of reform from within. "Actually, that depends on what you mean by 'from within,' " Silk writes. "Over the centuries, the impulse for change — reform — has indeed come from the outside: the Swabian monarchy in the 11th century, popular heresy in the 13th, the Protestant Reformation in the 16th, modernity in the 20th. But in each case, the reform was not imposed from without. It came from within, as it must." Punto.

At RealClearPolitics, Peter Berkowitz looks at issues of nationalism and the promotion of democracy through the lens of Michael Mandelbuam's new book The Rise and Fall of Peace on Earth. I haven't read Mandelbaum's book, but Berkowitz's essay is worth the read: He is one of the most thoughtful conservative thinkers out there.

At "The First," a publication from Catholic Theological Ethics in a World Church, Jason King looks at a recent debate between two moral theologians, Charles Camosy and Emily Reimer-Barry and directs the discussion in fruitful ways. I share Camosy's concerns about intersectionality as a concept which, not always but too often, creates what John McWhorter calls "victim chic." On the other hand, we must seek to hear from those voices which have been too long excluded from theological discussions. The discussion must be uppercase Catholic and lowercase catholic. I would only add Chesterton's famous observation about tradition.

The Democrats and the Wasserman Schultz problem