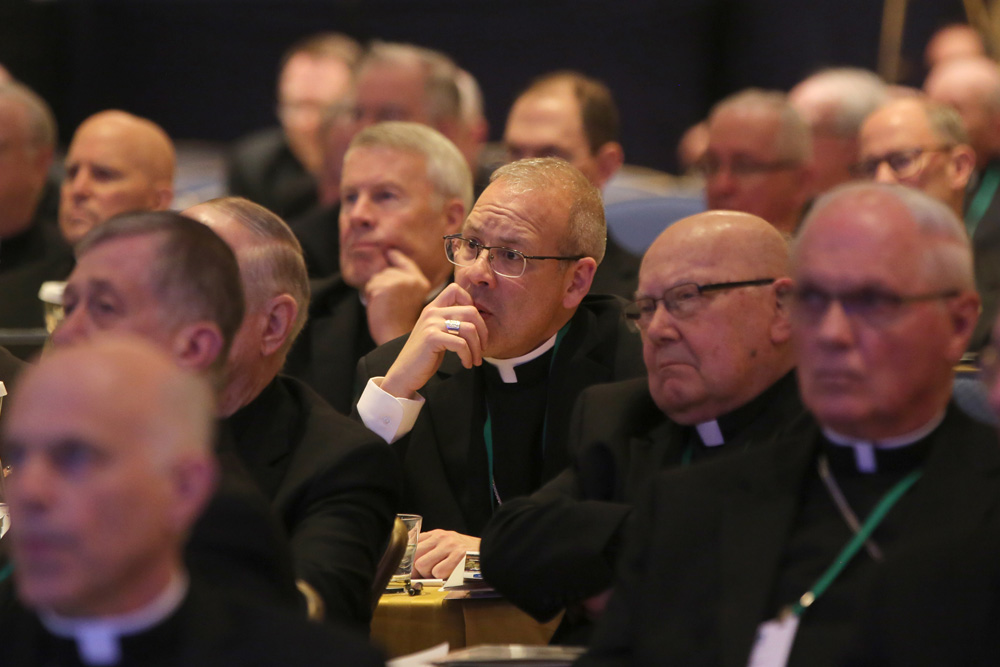 Bishops listen to a speaker Nov. 14, 2018, at the fall general assembly of the U.S. Conference of Catholic Bishops in Baltimore. The bishops will gather for their annual meeting in Baltimore Nov. 11-13. (CNS/Bob Roller)

Two weeks from today, the U.S. bishops will gather in Baltimore for their annual plenary meeting and, in a sense, the gathering is a metaphor for the situation of the Catholic Church in our nation at this moment in time. The meeting, like the church, is traditional, but no one knows what to expect, it will largely be ignored by mainstream society, and it is difficult to feel much confidence in the current leadership.

The biggest challenge is to get back to a sense of normalcy without downplaying the still potentially explosive issue of clergy sex abuse. The last two meetings were dominated by the issue with virtually all other business suspended. There were protesters outside the hotel and hordes of reporters inside. The usual friendly banter at the receptions seemed strained. The bishops as a whole looked haggard. And, the conference's leadership did not seem up to the task, at the last minute, forced to withdraw its inadequate proposals by the Vatican last November.

One of the items on the agenda is to elect a new president and vice president of the bishops' conference. It is widely anticipated that current vice president, Archbishop José Gomez of Los Angeles, will ascend to the presidency, and this is the one bright spot of the agenda: At a time when our president is demonizing immigrants and worse, inflicting real harm on real people, the bishops are about to elect a Mexican immigrant as their leader. Additionally, Gomez's statements at home tend to be more powerful than what the national conference issues, and so we can all hope protecting immigrants becomes the bishops' top priority in the year ahead.

The real contest will be for the vice presidency. The U.S. bishops' conference released the list of candidates and the near universal reaction was: What's to choose? Bishop Daniel Flores of Brownsville, Texas, is one of the conference's rising stars, a rare conservative who is genuinely and deeply engaging the magisterium of Pope Francis, but I doubt the conference will select two Latinos for leadership. Archbishop Paul Coakley has held several leadership positions at the conference and at Catholic Relief Services. Coakley, Archbishop Jerome Listecki of Milwaukee, Wisconsin, and Archbishop Allen Vigneron of Detroit, Michigan, would all be classified as conservatives but not culture warriors. San Francisco Archbishop Salvatore Cordileone, Fort Wayne-South Bend, Indiana, Bishop Kevin Rhoades and Bishop Thomas Paprocki of Springfield, Illinois, are leaders of the culture war faction. Bishop Frank Caggiano of Bridgeport, Connecticut, is hard to plot on the ideological scale, known more for his reputation as an ambitious prelate than for his ideological dispositions. As for Archbishop Timothy Broglio of the Military Services Archdiocese, I am still surprised no one has slapped him with a subpoena to find out what he knows about the rise of former cardinal Theodore McCarrick and the protection afforded serial child molester Fr. Marcial Maciel from his years serving as a chief aide to Cardinal Angelo Sodano, the former Vatican secretary of state. I suspect the bishops will choose Listecki or Coakley and I think either choice would be fine, if not particularly exciting.

Russell Shaw, writing in The Catholic Thing, suggested that the list of candidates reflects the fact that the U.S. bishops want to maintain an essentially conservative tack. He noted that the assembling of these slates begin with nominations from the full bench, and implied that those bishops who are most identified with Pope Francis failed to generate enough interest from their peers. But, he misses a step. Nominations are sent to the U.S. bishops' conference Committee on Priorities and Plans. They reach out to bishops and ask if they will stand for election. At least two of the three "Team Francis" bishops he mentioned — Cardinals Blase Cupich and Joseph Tobin, and Bishop Robert McElroy — declined to be nominated and they were not alone. A source told me 10 bishops were asked to stand for election and declined.

The conference also will be electing several committee chairs. The worst choice is for the Committee on Evangelization and Catechesis: St. Paul-Minneapolis Auxiliary Bishop Andrew Cozzens or Spokane, Washington, Bishop Thomas Daly. Cozzens has an affinity for the Tridentine Mass and Daly gave this interview to the Inlander that has too many outrageous comments to count. He is a culture warrior of the first order.

It will be curious to see whom the bishops select to lead the Committee on Ecumenical and Interreligious Affairs. Bishop Steven Lopes leads the Personal Ordinariate of the Chair of St. Peter, the nationwide diocese for former Anglican parishes. Given all the controversy over the possibility of ordaining viri probati in the Amazon, it would be quite remarkable to select a bishop who oversees an ordinariate in which most of the priests are married. On the other hand, Bishop David Talley of Memphis is himself a convert and, just as important, was sent to heal the troubled diocese of Memphis. I was surprised that his name was not on the list for the vice presidency of the conference as I think he could have won.

I shall conclude my curtain raiser on Wednesday.