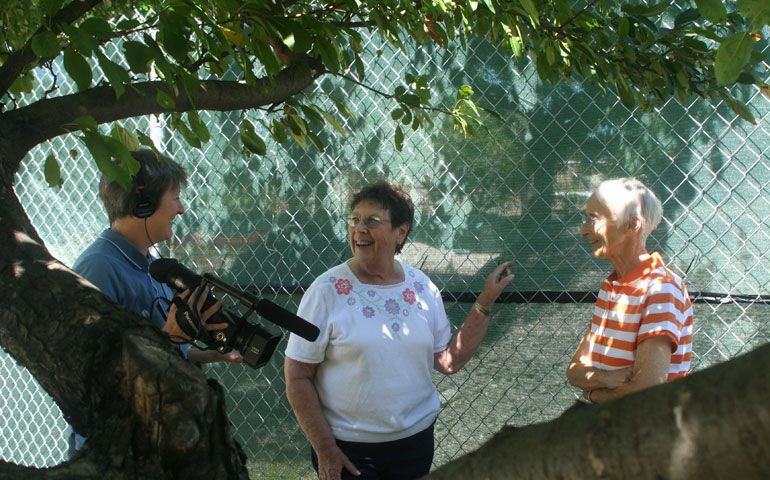 From left, Mary Fishman talks with Mercy Srs. JoAnn Persch and Pat Murphy during the filming of “Band of Sisters.” (Christian Molidor, RSM)

Chicago — Mary Fishman has spent the last eight years working on the documentary film "Band of Sisters" about American women religious after the Second Vatican Council -- a project that eventually inspired her to become an associate member of the Sisters of Mercy. But did she ever consider becoming a nun?

"Not at all," the Chicago-based producer and director said with a bit of a nervous laugh. "It wouldn't have worked, because I don't get up early enough."

Yet Fishman had to get up at 2:30 in the morning to follow two Chicago sisters who work with immigrant detainees and deportees in Chicago and whose story anchors the 88-minute film. "Band of Sisters" premiered Sept. 14 at the Gene Siskel Film Center in Chicago.

Both nuns -- Mercy Srs. Pat Murphy and JoAnn Persch -- were on hand at the sold-out premiere and joined Fishman for an audience Q-and-A after the screening. Murphy used the platform to urge the audience to "do something" about the dangerous environment into which the United States returns deportees in Mexico. "We are sending men and women back into a war zone," she said.

The stories and opinions of some two dozen women religious -- and one who left religious life -- are featured in the film, but Murphy and Persch's tale is woven throughout. They are shown praying the rosary outside a detention center, working with interfaith groups, lobbying for passage of a law that would allow detainees to meet with spiritual advisers, and getting a little goofy after a long day of ministry.

"I had this rule that I didn't want to go with the really famous sisters, like Joan Chittister or Helen Prejean," Fishman said. "I love them, but I felt it would be better to show people who aren't so well-known but who have very much been leaders of the movement for the last 50 years."

She knew Persch and Murphy from the social justice committee of her South Side Chicago parish. Others she met through three years of research, attending conferences, and word of mouth. The former urban planner for the city of Chicago was originally inspired to focus on women religious in this, her first feature film, by the book Aging With Grace: What the Nun Study Teaches Us About Leading Longer, Healthier, and More Meaningful Lives by David Snowdon, who studied aging and Alzheimer's in religious sisters.

"Band of Sisters" combines historical, pre-Vatican II footage with profiles of contemporary sisters recording podcasts, selling organic produce or doing acupuncture for low-income people. We see nuns in habit praying behind cloister walls, in skirts and sweaters marching for the Equal Rights Amendment and in sensible shoes protesting at the U.S. military's School of the Americas.

The transformation from sheltered "daughters of the church" to citizens of the world is told in the words of women religious themselves. The voices in the film include:

One of the only male voices in the documentary is that of the late Thomas Berry, Passionist priest, cosmologist and eco-theologian. The film highlights the work of "green sisters" involved in various environmental ministries.

"I really thought the film should culminate in that," Fishman explained. "We aren't going to be able to do anything for each other if we don't have an Earth. We really need a transformation of consciousness, and I hope the film will introduce people to those ideas."

Fishman saw her own environmental consciousness expanded during the making of the film, but that wasn't all that changed during the project, which took her to nine states and occupied eight years of her life, three of them full time. She had been educated by the Sisters of Mercy at Mother McAuley Liberal Arts High School in Chicago, before she studied architecture at the University of Notre Dame. But she admits she didn't feel like a "great Catholic."

"I felt pretty detached from the Catholic church, that it didn't really have a place for me," she recalled. "I felt there were many doctrines I didn't believe in, and I didn't follow all the church rules. But after spending time with these women, I've come to see that there's so much more to Catholicism than rules and dogma. I've been able to shed the idea of God as an angry white man, and I'm able to see God in so many more places now than I could before."

She not only hopes the film educates and inspires Catholics and non-Catholics, but also that it somehow helps women religious, who have come under attack by the hierarchy. The movie includes reaction to the Vatican's apostolic visitation but ended production before the most recent controversy over the Leadership Conference of Women Religious. It does, however, discuss the founding of LCWR -- an act of obedience on the part of U.S. nuns in response to Pope Pius XII.

"I tried very hard to make this a film about love, not about confrontation," Fishman said, though she noted that the groundswell of support among U.S. Catholics for women religious makes the timing of her film fortuitous.

The audience at the premiere was almost unanimous in its praise for the film, with attendees calling it "brilliant" and "inspirational." Two academics in the audience praised it for its historical accuracy, though one admitted he would have liked to have seen some mention of women religious in more traditional orders. ("That could be a whole 'nother film," Fishman responded.)

Sr. Beatrice Hernandez, former provincial of the Sisters of St. Francis in Wheaton, Ill., said she hoped the papal nuncio and all the U.S. bishops would see the film. "Maybe it will give them some insight into how religious life has changed since Vatican II and how sisters have remained faithful not only to the values of Vatican II but also the Gospel," she said.

As for Fishman, she said she's hopeful about the future of women's religious life. "I don't know what it's going to look like. It won't be these huge numbers, but their influence will still be huge."

When to see it

Screenings of "Band of Sisters" have been scheduled for:

For additional screens and to watch a trailer, visit bandofsistersmovie.com.

[Heidi Schumpf teaches communication at Aurora University outside Chicago. She is the author of While We Wait: Spiritual and Practical Advice for Those Trying to Adopt.]