Does excommunication do any good? 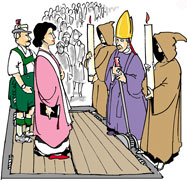 A neatly framed announcement hanging above a bookcase in my study warns that anyone who takes or damages one of my books is subject to excommunication reserved to the Holy See. I purchased it in a gift store in Salamanca, Spain, where the original notice had been hung in the university library sometime around 1440.

I had long found it curious that someone borrowing a book without permission could be subject to the church’s severest penalty. One could get excommunicated in those days for all manner of offenses. That’s no longer the case, but it doesn’t mean that excommunications are no longer commonplace.

There seems to be a rash of bishops announcing excommunications these days. Though supposed to be medicinal, church leaders have reason to wonder if they haven’t become counterproductive: for most U.S. Catholics an embarrassment, for non-Catholics, a scandal.

Mercy Sr. Margaret McBride’s case is only the most recent to make the op-ed columns. As a member of the ethics committee of St. Joseph’s Hospital in Phoenix, she joined in a decision late last year that an abortion was the lesser of two evils in the face of the almost certain death of a woman suffering from pulmonary hypertension, a mother of four. Without the abortion, neither mother nor fetus would survive and four children would be orphaned. Nonetheless, when he later learned of the decision, Phoenix Bishop Thomas Olmsted declared in a statement that McBride had been excommunicated.

The outrage in the media was immediate. Pundits accused the bishop of arrogance and misogyny. They pointed to the priests found guilty of raping and molesting minors and the bishops who covered up for them. Why was the nun excommunicated, and not the priests and bishops?

The excommunication in Phoenix recalls the case last year in Recife, Brazil. There, a 9-year-old girl was discovered to be pregnant with twins, after having been repeatedly raped by her stepfather. In her fourth month, and weighing only 66 pounds, it was doubtful that she or the twins would survive. The girl’s mother arranged for an abortion. Archbishop José Cardoso Sobrinho of Olinda and Recife publicly declared that the girl’s mother was excommunicated as were all who worked on the abortion. The one person not excommunicated in this case was the stepfather rapist.

The church’s canon law excommunicates anyone involved in obtaining or procuring an abortion. It also automatically excommunicates heretics, schismatics, priests who break the seal of confession, and bishops who ordain other bishops without Vatican permission. Canon law does not excommunicate rapists, child molesters, or, for that matter, murderers. Contrary to common misperception, the bishop of Phoenix and archbishop of Recife did not excommunicate the women and doctors themselves; the prelates declared that the excommunications had taken place automatically (latae sententiae), by the very act of abortion itself.

In Germany excommunication is tied up with money. Civil law requires every church member to pay a church tax (Kirchensteuer). The only way German Catholics can get out of paying the extra tax is to inform the government formally that they have left the church. The Council of German Bishops has decided that such a declaration is a schismatic act punished by automatic excommunication. From 1998 to 2007, the penalty was meted out to some 1.1 million German Catholics.

But then last year a former canon law professor at the University of Freiburg, Hartmut Zapp, decided to challenge the church tax. He declared that he was leaving the Catholic church as a legal institution but remaining in it as a community of faith. Fearing a precedent and the potential loss of millions of euros, the Freiburg archdiocese rejected the distinction: One either left the church or did not, all or nothing at all. In May this year, a German court agreed that it was up to church authorities to decide. Zapp is now declared by church and state as having left the Catholic church. That makes him a schismatic and an excommunicate.

I first began thinking about excommunication when friends of mine attended the ordination of two women in the Roman Catholic Womenpriests movement in February in Sarasota, Fla. I pointed out to them, after the fact, that the Florida papers quoted the local bishop as saying that Catholics who participated in the event were excommunicated. The response of my friends, both of whom are weekly communicants, was a dismissive wave of the hand. Oh, just like that abortion case in Brazil, where everyone was excommunicated except the rapist.

Before the separation of church and state, the threat of excommunication brought emperors to their knees. Theologians with unorthodox opinions could face burning at the stake. Now ordinary Catholics treat it with a flip wave of a hand. My friends are not singular, not in light of the 1.1 million German Catholics who have left and the millions of U.S. young people cited by the Pew Research Center as having left. Then there are the millions more “cafeteria Catholics” who remain in the church, go to Communion weekly, but disagree with the bishop of Phoenix and believe that McBride and the ethics board did the right thing. Are Catholics ever allowed to see abortion as the lesser of two evils? In the face of such moral dilemmas, the automatic excommunication is intended to leave no doubt as to where the church’s leadership stands. Whether that lessens the number of abortions is at least doubtful.

When bishops declare Catholics excommunicated, they make the presumption that the alleged offenders were deliberately violating their consciences, acting in bad faith and therefore committing a grievous sin. But no one, no bishop, can presume to judge another person’s conscience. The Second Vatican Council described conscience as the “sanctuary” where the individual “is alone with God” (Gaudium et spes). In the opinion of Thomas Aquinas, we are bound to follow our consciences, even when in error, even if it means excommunication.

None of this is new. It goes back before Martin Luther who famously appealed at the Diet of Worms that “it is neither safe nor right to go against conscience.”

Catholics for centuries presumed that Luther was acting in bad faith. Ecumenical dialogue in recent decades has weakened that assumption. What’s new is that the appeal to conscience is being made not by fire-breathing reformist monks but by septuagenarians like Zapp and soft-spoken women like McBride.

What’s new are the growing numbers of women in Europe and the United States who claim ordination to the priesthood. They acknowledge that the original ordinations of women bishops were not permitted by the Vatican and would therefore be illicit. But they insist that the original ordinations were conferred by male bishops in apostolic succession and are therefore valid. And when local bishops serve these women with papers declaring them excommunicated, they appeal to their clear consciences, to their love for the church, and to the example of Jesus.

The Catholic church is not singular in practicing excommunication. Any number of faith traditions exercise the penalty, and there are biblical warrants for it in the New Testament. The issue is whether the church should practice so-called automatic excommunications. And whether excommunication can claim any warrant whatsoever from the Jesus we now know better from modern biblical studies, the Jesus who ate with publicans and sinners, who was provocative precisely for not banning anyone from his open table.

If excommunication is meant to be medicinal, it certainly does not seem to be working. It does not seem to be stopping either Catholic women or their Catholic doctors from choosing what they see as the lesser of two evils when a pregnancy means the loss of two lives and not just one. It does not seem to deter women from entering into the ranks of the Roman Catholic Womenpriests movement. The church’s severest ban against it notwithstanding, the women’s ordination movement shows no sign of going away. The women ordained in it appear satisfied that the Holy Spirit is on their side. It took some centuries for the Catholic church to change its thinking on Luther; they fully expect their time to come too.

In the meantime, the bishops are put in the unenviable position of appearing to be at war with women. Some speak of a virtual schism already in the church. But, women ask in reply, who is in schism? They or the bishops? At one time, simply asking questions like that got one excommunicated. For that matter, writing a reflection like this did too.

[Ronald Modras is a professor of theological studies at St. Louis University. He is the author of Ignatian Humanism (Loyola Press).]

Does excommunication do any good?