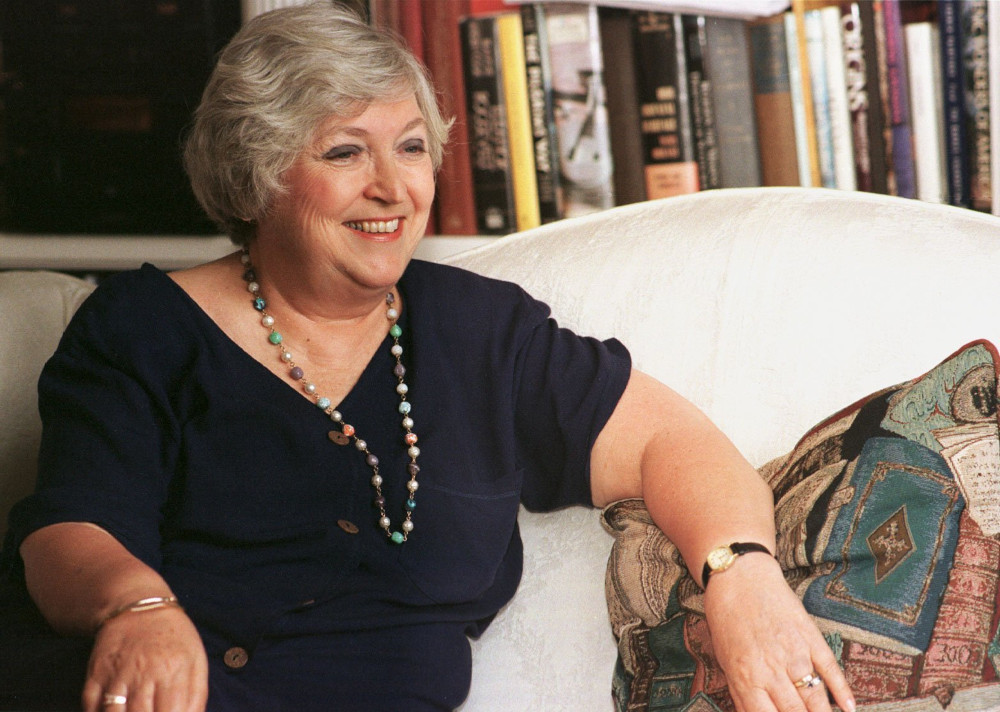 Dolores Leckey, founding director of the U.S. bishops' Secretariat for the Laity (1977-1997), is pictured in a 1997 photo. She died Jan. 17, 2023, at age 89. She was an adviser to U.S. bishops for two world synods, lectured and wrote on lay spirituality, and was a senior fellow at Woodstock Theological Center at Georgetown University. (OSV News photo/CNS file, Nancy Wiechec)

Dolores R. Leckey, who was founding director of the U.S. bishops' Secretariat for the Laity in 1977 and at the time one of the highest ranking women in the U.S. Catholic Church, died peacefully of natural causes Jan. 17 in her home in Arlington. She was 89.

Her funeral Mass will be celebrated Jan. 26 at Our Lady Queen of Peace Catholic Church in Arlington.

Leckey worked in the area of lay spirituality as a retreat leader, lecturer and writer for over 40 years. She was the recipient of 13 honorary degrees and among her many other honors, she received the St. Elizabeth Seton Medal from Mount St. Joseph University in Cincinnati in 2012, given in recognition of distinguished women in theology.

When she retired from the post in 1997, she went to Woodstock Theological Center at Jesuit-run Georgetown University in the spring of 1998 and was the first woman to be a senior fellow at the center.

Leckey was the author of numerous published articles, talks and reflections. She also wrote more than a dozen books including "The Ordinary Way: A Family Spirituality," 1982; "Laity Stirring the Church: Prophetic Questions," 1987; "Women and Creativity," 1991; "Winter Music: A Life of Jessica Powers: Poet, Nun, Woman of the 20th Century," 1992; "The Laity and Christian Education," 2006; and "Interior Journey: A Spirituality for Contemporary Seekers," 2015.

Leckey's last book, published in 2022, was a memoir titled "Reviewed: Scenes From a Long Life." It concludes: "I cannot help think of the lines in T.S. Eliot's poem 'East Coker,' where he writes, ‘'n the end is my beginning.'"

In an interview with Catholic News Service when she retired from the laity secretary, Leckey pointed to several successes during her tenure.

These included both the 1980 and 1995 versions of the U.S. bishops' pastoral message "Called and Gifted" on the laity; the bishops' 1992 pastoral response to domestic violence against women, "When I Call for Help" (updated in 2002); and their 1994 document "Strengthening the Bonds of Peace: A Pastoral Reflection on Women in the Church and in Society.”

"'Called and Gifted,'" she told CNS, "gave a boost to laity and it gave encouragement to bishops to promote the role of the laity."

"Strengthening the Bonds of Peace" was issued the same year as St. John Paul II's apostolic letter "Ordinatio Sacerdotalis" ("Priestly Ordination"), which "reaffirmed that the Catholic Church has no authority to confer priestly ordination on women."

"OK, so the ordination question is closed. But what doors are open? And that I think is the right way to go," she told CNS.

Four years later, the bishops issued a 26-page booklet, titled "From Words to Deeds,” addressing three areas: appreciating and incorporating the gifts of women in the church; appointing women to church leadership positions; and promoting collaboration between men and women in the church.

Dolores Regina Conklin Leckey was born April 12, 1933, in the New York City borough of Queens to Joseph and Florence (Kelly) Conklin. She was the youngest of five children.

She married Thomas Philip Leckey, a financial manager, in 1957. In the early years of their marriage, Dolores taught English and drama; in the early 1970s, she produced shows for public television.

She and Tom were long involved in community projects, including the Arlington Street People's Assistance Network, which helps homeless people, and they also helped found the Arlington Partnership for Affordable Housing, which bought and rehabilitated apartments for people who otherwise couldn't afford Arlington rents.

In her interview with CNS upon her retirement at as head of the bishops' laity secretariat, Leckey said it was "a wonderful, wonderful opportunity, 20 years that I never sought, never expected, that have just been filled with a view of the church that would not have been given to me otherwise."

"In a way," she said, "I've been ministered to rather than ministering to others."

"I learned an enormous amount about the perplexity and the goodness of all these various instrumentalities and agencies of the church," she continued. "We are so huge and so complex, and so much good gets done."

When asked about her hopes for the church of her grandchildren, Leckey ticked off attributes that formed her core message over the years.

It would be "a welcoming place ... that can give them meaning," one committed to interreligious dialogue and tolerance, one that imbues "a sense of responsibility and mission to the world," she said. It would "keep alive the mystical tradition, and teach the sanctity of marriage and family life and care for those in trouble," she added.

She added, "I hope that they'll find the church a fun place to be, and not a dreary, gloomy place."