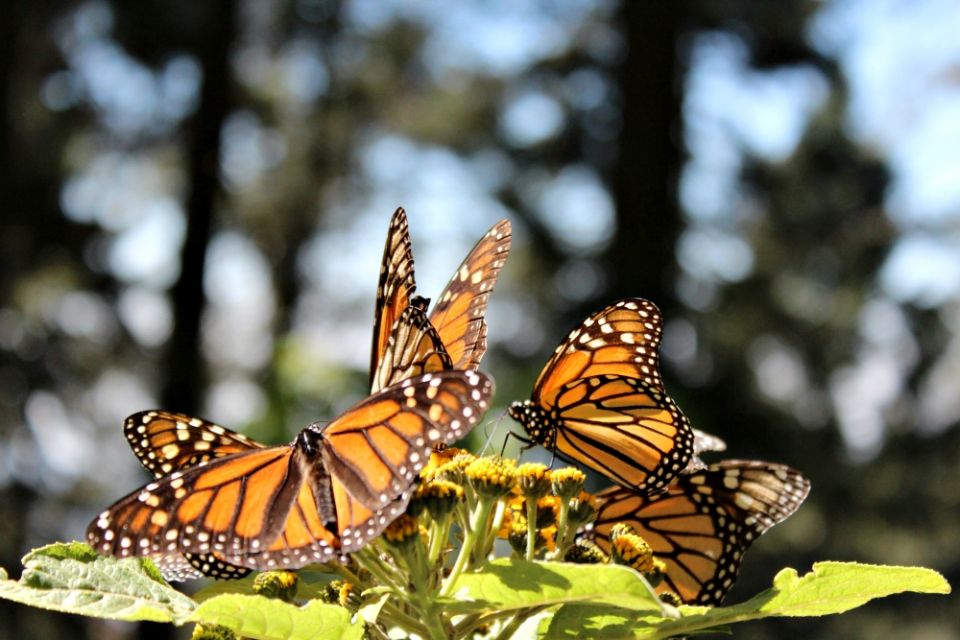 Within a one-week span, two environmental activists and advocates for the monarch butterfly were found violently killed in the Pacific coast state of Michoacán, Mexico.

After going missing on Jan. 13, Homero Gómez's body was found in a retention pond on Jan. 29. Gómez's family said that before he was disappeared, he'd received warnings to stop campaigning against illegal logging in the region — a major threat to the protected forests where the butterflies migrate for winter hibernation.

On Jan. 27, two days before Gómez was found, Raúl Hernández also went missing. On Feb. 3, seven days after he was disappeared, the 44-year-old's body was found severely beaten on the top of a hill in the El Campanario monarch butterfly sanctuary. Hernández was a part-time tour guide at the local monarch butterfly sanctuary in Michoacán state and, as with Gómez, Hernandez's family said he'd received death threats leading up to his murder.

Both Hernández and Gómez advocated for the survival of the butterflies and the woods they migrate to every year in Michoacán state.

The Monarch Butterfly Biosphere Reserve, a UNESCO World Heritage Site in Michoacán, is in the hillsides of the Oyamel fir and pine forests. Every autumn up to a billion monarch butterflies migrate to Michoacán from as far north as Canada.

At a distance of more than 3,000 miles, it's the longest migration of any insect known. And because the butterflies have such a short lifespan, four back-to-back generations of monarchs are born and die during the eight-month migration cycle. Remarkably, they are still able to return to the same place, year after year.

The sacred firs of the wooded forests that border Michoacán and Mexico states provide a blanket of trees for the insects where temperatures stay regulated. When the monarchs arrive, the tree branches droop from the weight of the butterflies, camouflaging the trees in a breathtaking splattering of black and orange.

The monarchs then wait out the winter and later travel back north to warmer areas in Texas and lay eggs on milkweed plants before heading back up to Eastern Canada for its cooler summer temperatures, and then back on to Mexico again in the autumn. The natural phenomenon is an extraordinary experience to witness — one that these men gave their lives for.

On Feb. 4, UNESCO issued a statement requesting an investigation into what it called "the extremely disturbing circumstances that marked his [Hernández's] death, a few days after the as yet unsolved death of Mr. Homero Gómez González, also an activist and manager in the same biosphere reserve."

But arrests in the murders are highly unlikely.

In 2019, there were 34,582 homicides in Mexico — the highest number in two decades and it doesn't look like things are going to get better anytime soon. While most people associate the Mexican cartels with international drug trafficking, as a November report in the Los Angeles Times pointed out, cartels have diversified.

In Guerrero state, Coca-Cola and Pepsi plants had to close because of extortion. In Guanajuato, cartels fighting over oil pipelines have cause an average of 14 murders a day since the beginning of 2020.

And in Michoacán, cartels like the Viagras and the Nuevo Cartel Jalisco are locked in a deadly fight over gaining control of the illegal logging industry and over control of privately owned avocado fields, the so-called "green gold" of Mexico, and a multibillion-dollar industry.

The Morelia Archdiocese in the state of Michoacán issued a press release in December in response to the intensified violence in the region and the coming of the 2019 Advent. Archbishop Carlos Garfias Merlos said in his statement,

The current situation of violence in Morelia and other communities makes us reflect and demands the commitment and the decision to respond to the need to contribute all to the construction of peace.

Faced with this sad aggressive reality and to contribute to the cessation of violence, considering that a culture of violence is being generated, and that it has been promoting a lifestyle ... that is making its way into those sectors of the society, it is necessary to anticipate and integrate strategies among communities that favor dialogue, civility and peace.

I call everyone to civility, to dialogue and to peace. Let's promote a culture of peace, in the midst of violence.

Unfortunately, the cartels did not heed his calls.

Migrating monarch butterfly populations are on the decline for several reasons, including illegal logging in Mexican forests. Monarchs inhabited only 6.12 acres in December 2017, an 86% drop since 1996. The climate crisis is also a major factor in the decline of the butterflies, as warmer weather confuses butterflies waiting for cold weather to start their annual migrations.

Wondering what you can do to help? For starters, you can donate to organizations like the World Wildlife Fund's Monarch Squad. You can also plant milkweed for the monarchs to lay their eggs.

If you want to see the butterflies in person, you can also visit Michoacán and support the monarch sanctuary by visiting the UNESCO site between November and March. The World Wildlife Fund and other organizations also organize annual tours.

[Carli Pierson is an international attorney and freelance writer based in Mexico.]