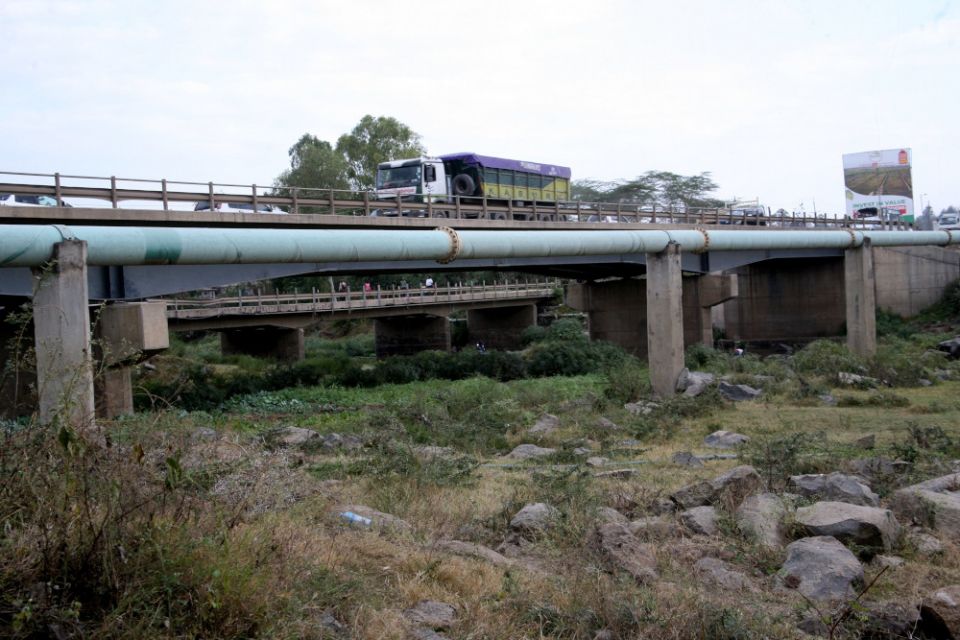 A truck travels over a bridge above a pipeline along the Athi River area near Nairobi, Kenya, Sept. 10, 2020. A similar oil pipeline in Uganda and Tanzania is being resisted over concerns that it will harm the people, environment and wildlife. (CNS/Fredrick Nzwili)

NAIROBI, Kenya — As Catholic groups worldwide divest from fossil fuels, some priests, environmental conservationists and activists in East Africa are resisting an oil pipeline taking shape in their region.

"We are saying no to the pipeline. It is not good for the ecosystem. Our concern is that the many people would suffer in case of a spill or leak," Capuchin Br. Benedict Ayodi, Global Catholic Climate Movement program manager for Africa, told Catholic News Service. "Our call is on the partners involved to delay or completely stop the pipeline. It is unacceptable."

The opposition to the pipeline comes at a time when Ugandan officials are upbeat that the landlocked East African country will become one of Africa's leading oil producers. The pipeline would collect crude oil from Kabaale in western Uganda and drop it into storage and load-out facilities at Chongoleani Peninsula near Tanga, an Indian Ocean port in Tanzania.

In 2006, Ugandan President Yoweri Museveni announced the oil's discovery after years of exploration and promised to use the wealth for development. The oil — estimated at 1.7 billion barrels — is buried in rock in the Albertine Graben basin of Lake Albert on the border between Uganda and Congo.

But as the project shapes up, groups opposed to the pipeline warn that establishment means increased greenhouse gas emissions into the atmosphere. For them, the pipeline is unwanted at a time when the world is trying to find ways to reduce the gases, which scientists blame for global warming. Apart from emissions, they also fear the project will trigger displacement, threaten water sources, wetlands and protected wildlife and environmental areas, and jeopardize the local communities' incomes.

Prince Papa, Global Catholic Climate Movement African program coordinator, said the organization's resistance to the pipeline is informed by the teachings of the papal encyclical, Laudato Si', which calls for slowing down the use of fossil fuels and shunning any development with adverse impact on creation.

On Sept. 10, the pipeline was the focus of a webinar organized by the Global Catholic Climate Movement as part of the monthlong ecumenical celebrations for the Season of Creation. The webinar attempted to answer the question: Does Africa have the alternative energy pathways for its growth or does it have to crawl through the dirty alleys of energy for its growth?

"It is important to use every available lever to push away the EACOP and gas projects in Mozambique," said Thula Makama, webinar panelist and senior adviser to Oil Change International. The organization in involved in research, communications and advocacy focused on exposing the true cost of fossil fuels.

"The future of Africa's energy and development is not in fossil fuels. Fossil fuels are too unstable. ... They are too volatile," she said, referring to the recent spills in the continent, conflicts associated with the exploitation and the climatic disasters linked to global warming.

At the webinar, speakers called for phaseout of fossil fuel use in Africa and fast-tracking of the transition into renewal energy to stop climate change.

"If we delay, the transition to renewable energy is going to be much harder," said Mohamed Adow, director of Power Shift Africa, an organization mobilizing for climate action in Africa.