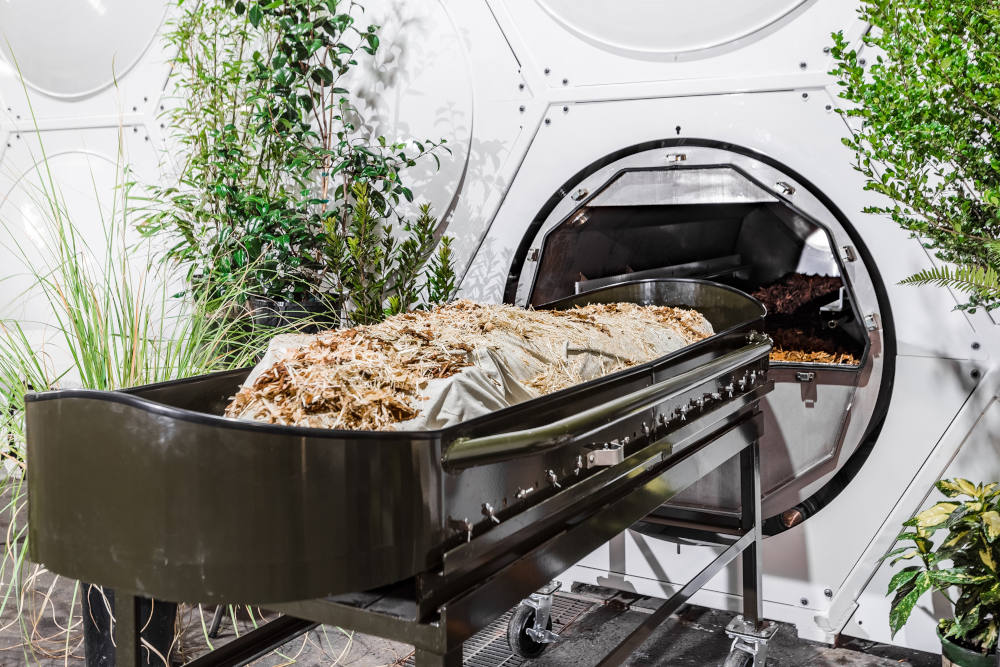 A example vessel that is used in the natural organic reduction process created by Recompose. (AP/Sabel Roizen)

Seeking to legalize the process of converting bodies into soil, a California legislator is attempting, once again, to pass a bill that would allow human composting in the Golden State.

Burial, cremation and alkaline hydrolysis are the only death care choices available in California, and proponents say the new bill, AB 351, "offers another option for individuals who want a different method to honor their remains after death."

The process for composting a body was introduced by the Seattle-based company Recompose, which is now open for business after the state of Washington legalized the process in 2019. Colorado was the second state to legalize it, followed by Oregon, when Gov. Kate Brown in 2021 signed House Bill 2574 into law. New York's bill is awaiting Gov. Kathy Hochul's endorsement.

In California, where the massive number of COVID-19 deaths inundated funeral homes and even led to Los Angeles County's suspension of air quality regulations on cremation, State Assemblywoman Cristina Garcia, a Democrat who introduced the legislation, said this is another "sad reminder that we must legalize a more environmentally friendly option as soon as possible."

Garcia introduced a similar bill in early 2020, but it did not make it out of a Senate committee due to costs. The new bill made it through the Senate Business, Professions, and Economic Development Committee on June 13.

Here's how the human composting method works: A dead body is broken down through a process known as Natural Organic Reduction by placing the body in a reusable vessel, covering it with wood chips and aerating it, which creates an environment for microbes and essential bacteria. The body, over a span of about 30 days, is fully transformed into soil.

Catholic bishops have opposed this process in states where human composting has been legalized.

The California Catholic Conference on June 14 submitted a letter of opposition in reaction to the bill.

In the letter, Domingo likened Natural Organic Reduction to methods of disposal of livestock, "not as a means of human burial." Using this method, Domingo said, "can create an unfortunate spiritual, emotional and psychological distancing from the deceased."

In public testimony, the Oregon bill garnered widespread support, with one Portland resident saying the method provides a "spiritually grounded way" to "return to the land that sustained us in life." In other parts of the country, people are hoping the process is legalized in their states to, as Cory Ruetten of Maryland put it, "return us to the earth … the way that we were meant to."