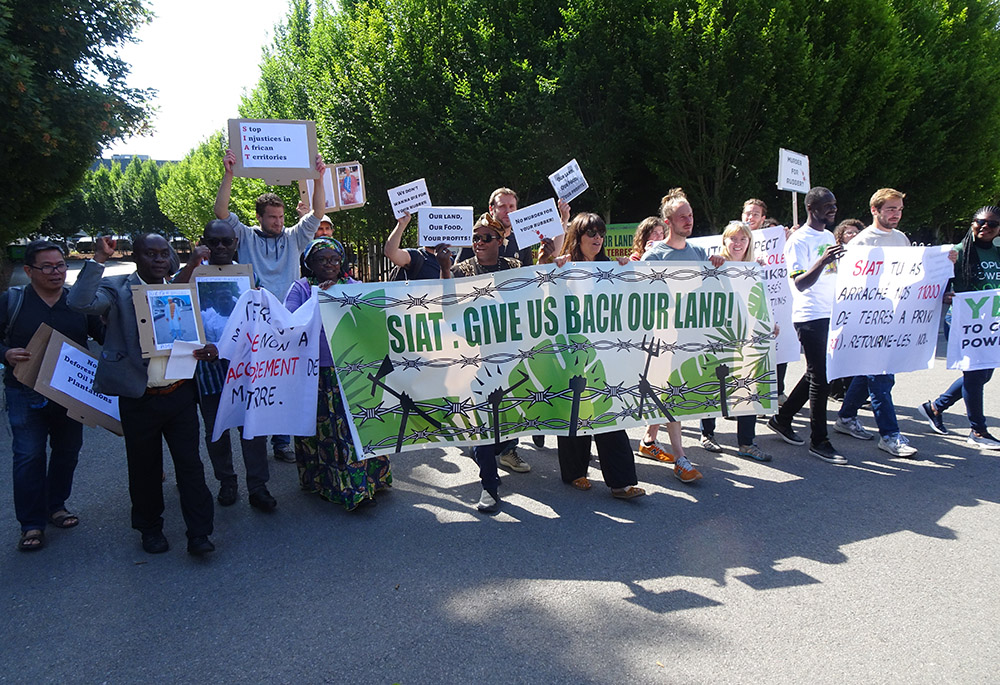 A delegation of communities from Ivory Coast, Ghana and Nigeria, accompanied by local and Belgian nongovernmental organizations, protested outside the headquarters of SIAT Group in Brussels. The oil palm company has been accused of land grabbing in Africa and violating the rights of local farmers and communities. (CIDSE/Arnaud Ghys)

For all his adult life, Joseph Amoh Ayisi cultivated cassava, cocoa and plantains in the Subensu area of Kwahu district in Ghana's Eastern Region.

The crops he grew are crucial for his survival and that of his community. Cassava is a major staple in West Africa; cocoa is a cash crop used in the manufacture of chocolate, while plantains, another cash crop, are in the same family of fruit as bananas.

Life was bearable for him, his family and others within his community, thanks to these farming activities that earned them an income. They complemented this with rearing of livestock, such as pigs, poultry and goats, all of which roamed around their land holdings.

In difficult times, the livestock would easily be sold for cash.

But Ayisi's life and fortunes have taken a sharp turn for the worse in the past few months when he lost his land holdings to commercial agro-processing companies that are turning African communal lands into commercial crop production fields.

The companies grow palms for processing into edible oils or grow cocoa. In some cases, as in Zimbabwe, an agro-processing company, Dendairy, intends to grow fodder for dairy cattle ranching, with the milk processed into dairy products. These companies require large tracts of land for their operations and have been turning African communal lands into commercial crop production fields. Very often, this is drawing them into conflict with communities.

These companies are picking up leases and concessions under controversial land deals with African governments desperate for investment to spur development. 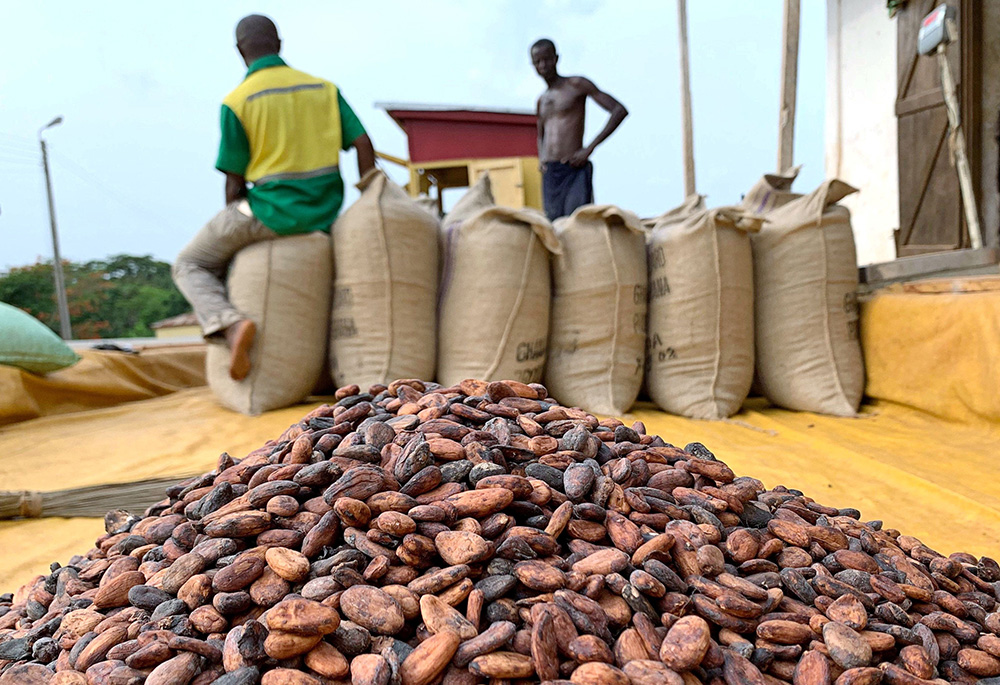 Two workers are pictured near sacks of cocoa beans standing next to a warehouse in 2020 in Atroni, Ghana. (CNS/Reuters/Ange Aboa)

"We cultivated mostly oil palm, cocoa, cassava, plantain and also reared livestock such as pigs, goats and chickens for commercial purposes and our own consumption," Ayisi said in an interview with EarthBeat. "But now with the presence of Ghana Oil Palm Development Company [GOPDC] we have lost all that and now we are residents of different communities around us."

The SIAT Group, parent company to GOPDC, has agro-processing operations across western Africa. It is among large agro-processing companies that have been heavily criticized for displacing African communities in Ghana, Ivory Coast and Nigeria for little to no compensation.

They are also accused of not properly consulting communities when setting up operations that include vast oil palm fields. The SIAT Group did not respond to emailed questions before publication.

Ayisi, who has now separated with his spouse "due to the hardships we are facing," is not alone in this.

His misfortunes and plight are shared by many communal farmers and Indigenous groups across Africa, a continent where agriculture is a key economic mainstay for both economies and households.

In October, the Symposium of Episcopal Conferences of Africa and Madagascar said that private sector land deals concluded for 2021 alone covered more than 62 million acres.

The African Catholic bishops criticized "the impunity of corporate and elite capture of African land and natural resources," saying this new rush for African land was damaging "to Africa's food systems, to our environment, our soils, lands and water, our biodiversity" and health.

Just this June, a delegation of African communities that lost their land to SIAT Group demonstrated and handed over a petition to executives at the company's Belgian headquarters.

According to its website, the company specializes in the "establishment and management of oil palm and rubber plantations and allied processing," mostly in Africa.

The African delegation represented communities from Ivory Coast, Ghana and Nigeria. Other communities impacted and displaced by other large agro-processing groups have similar and even bigger problems.

During their demonstration at the Belgian company's headquarters, the delegation from western Africa sought to "denounce land grabbing" and its "negative impact" on local communities.

Rita Uwaka, forest and biodiversity program coordinator at Friends of the Earth Africa, was among the delegates that protested at SIAT Group's Brussels office.

She told EarthBeat that in Nigeria alone local farming communities with over 20,000 people had been negatively impacted by relocations and displacements of African farmers from their land by big agro-companies.

"The Nigerian government is prioritizing private investment without taking into consideration the interests of communities impacted by the agro-processing companies when they displace farmers. These people depend on this land for their daily sustenance and these companies such as SIAT are disturbing the livelihoods of the communities," she said. 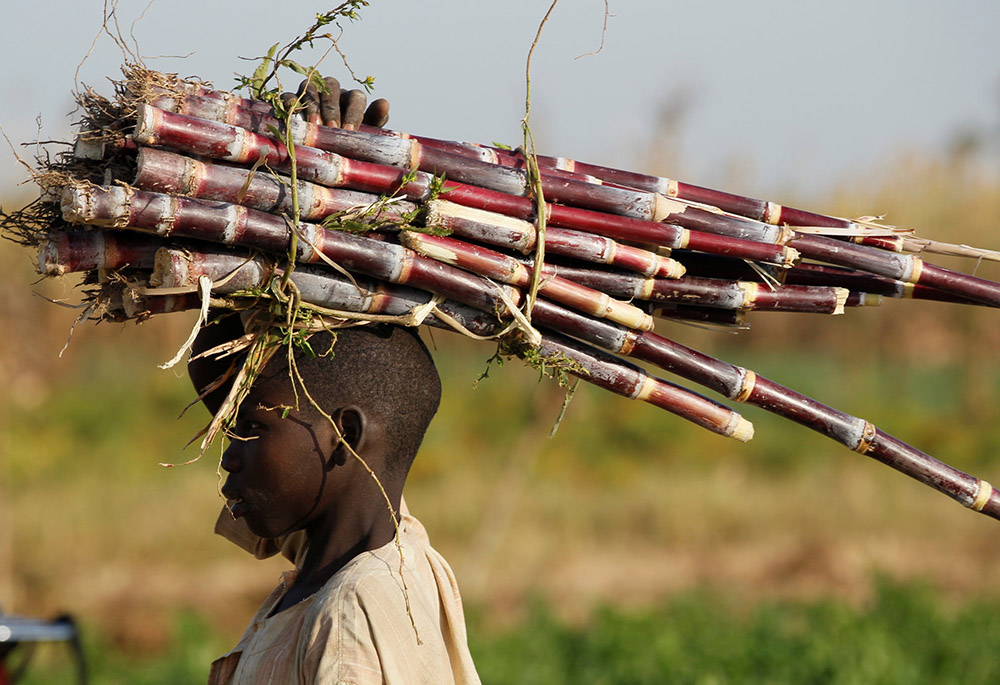 A young person carries sugar cane on a farm in mid-November 2016 near Zaria, Nigeria. (CNS/Reuters/Akintunde Akinleye)

CIDSE, the network of mainly European-based Catholic development organizations, has studied the trend of large-scale land acquisitions in Africa, finding that since 2000 upwards of 25 million hectares, or nearly 62 million acres, of land have been carried out across the continent. Catholic agencies are assisting with a study to determine the impact in Nigeria of the land takeovers and subsequent development of farmers by big agro-processing companies.

Uwaka said her organization is carrying out the research, which she said is supported by the U.K. bishops' aid agency CAFOD, and is also working with Caritas Nigeria to share information "about what is happening on the ground in these communities in terms of the impact and what can be done."

CIDSE and Caritas have previously supported a similar study into the impact of land-takeover by agro-processing companies in neighboring Ivory Coast, where it was found that the state that allocated land to a unit of SIAT "effectively denied customary land holders the right granted to them through the Ivorian law, which today suffers the multiple consequences" of land disputes.

Communities like Famienkro, Koffessou-Groumania and Timbo, all areas of Iffou in eastern Ivory Coast which are mostly made up of families practicing small-scale agriculture, say they have faced massive, negative consequences.

They charge that "the company did not consult with them nor collect their informed consent prior to the installation" of an agro-processing project in the area, according to the report. 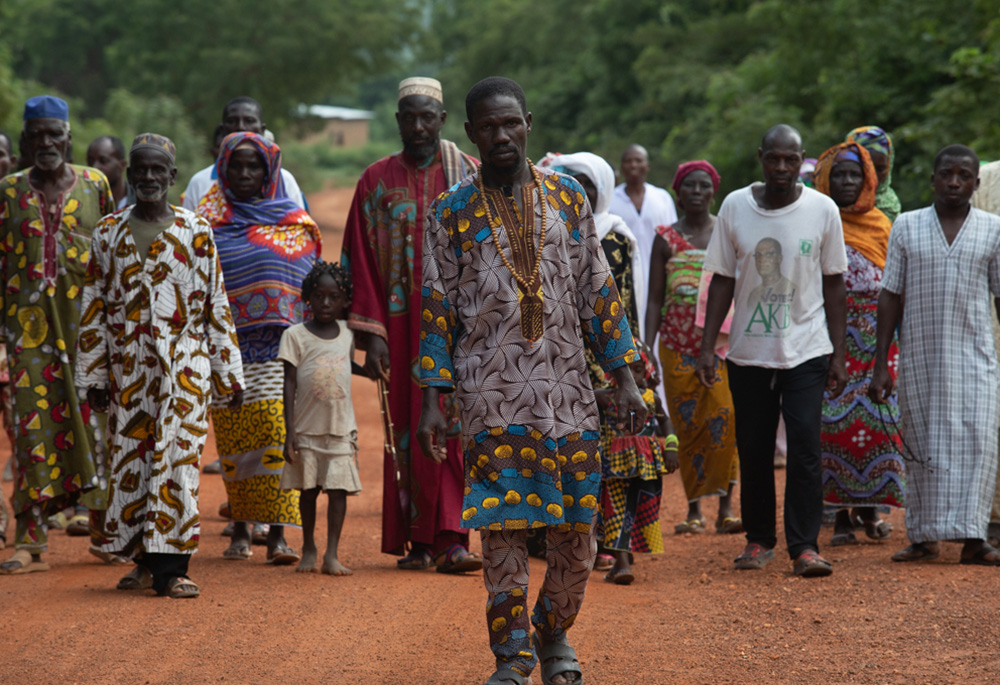 In the Ivory Coast, 11,000 hectares (27,000 acres) are at the center of a dispute between small-scale farming villages and a subsidiary of the Belgian-based agro-company SIAT Group. A June report by CISDE, a network of Catholic social justice organizations primarily in Europe, stated that the villagers have been stripped of their land, displaced from their homes and several people killed during protests against a rubber plantation. (CIDSE/Christophe Smets La Boîte)

Data from other researchers, such as the international small farmers non-profit GRAIN, have shown that more than 65 large-scale land deals for oil palm plantations in Africa were signed between 2000 and 2015, covering upwards of 4.7 million hectares (or 11.6 million acres).

The downside to this is that "multinational companies, in collaboration with local elites and development banks, had launched a full-scale attack against communities from Sierra Leone in West Africa to the DR Congo in Central Africa to take their lands for oil palm plantations," a 2019 GRAIN report detailed.

In Zimbabwe, which displaced roughly 3,500 white commercial farmers in the early 2000s, about 12,000 Indigenous villagers from Chilonga in the country's lowveld region are resisting President Emmerson Mnangagwa's government's allocation of their land to Dendairy, a dairy processing company. The company intends to grow Lucerne grass to feed its dairy cows on the land, although the case, ruled against the communal villagers in lower courts, has now spilled into the Constitutional Court of Zimbabwe.

As the court case has held the limelight, Livistone Chikutu, one of the affected villagers, said at a press conference in Harare this year: "It's a lot of lies saying they did door-to-door consultation, yet we are the settlers and we did not see such a thing. There is no promise on the compensation, they just want to grab our land and run away."

"We can't let our land be taken in that way, we have seen it before and there was no compensation," he said.

There is growing evidence of the wider impact of the displacement of African farming communities from their land to pave way for agro-processing companies.

A December 2021 study on the different aspects of rural income sources and assets from 255 displaced farmers and 266 non-displaced farmers in Adamitulu and Dugda districts of Ethiopia indicated "a significant reduction of income and assets among the displaced" farming households.

The study further found that the mean annual income of households displaced by large-scale agro-processing firms declined by 72%, or the equivalent of about $1,800 compared to incomes of non-displaced households.

Those displaced, such as Ayisi from Ghana, are often not consulted when governments decide to parcel away their land holdings to agro-processing companies for commercial farming activities.

In the few cases where communities are supposed to receive compensation for losing their land and for resettlement, the reparations are often below the value deriving from their land tenure activities.

"A small number of us were paid compensation for the destruction of property on the land but not for the land itself," Ayisi said. "The compensation was not paid under any terms so [for] every one acre of land, 8,000 Ghana cedis [about $981] was paid, which is nothing compared to the value of the crops and the land we lost."