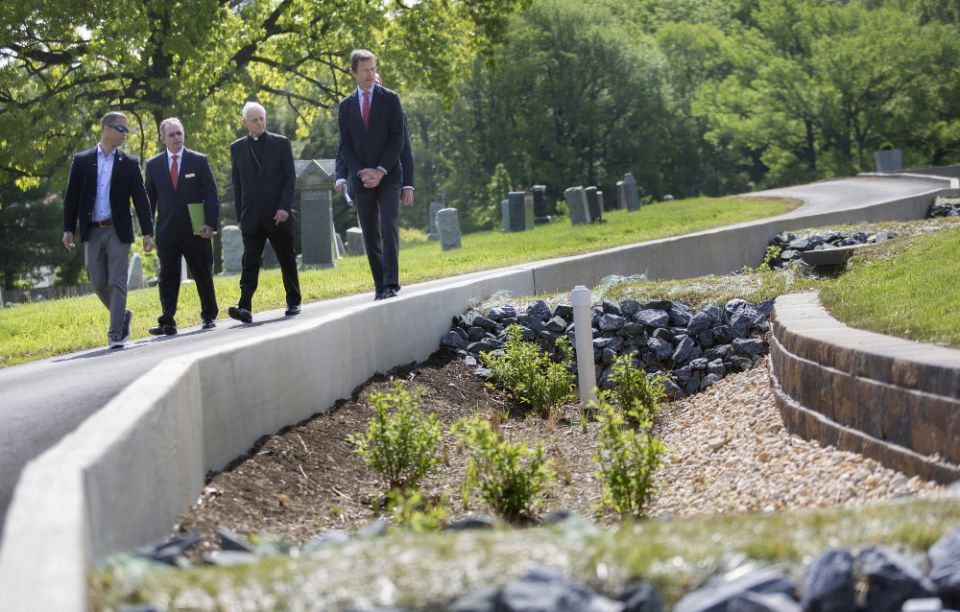 Washington — Cardinal Donald Wuerl of Washington blessed a newly completed green infrastructure project at a Catholic cemetery May 7, saying it "is part of our effort to keep God's creation as beautiful as when he created it."

The Archdiocese of Washington teamed with the Nature Conservancy, a national organization working on land and water conservation, to create the natural infrastructure that will reduce pollutants from water runoff in Mount Olivet Cemetery in Northeast Washington.

The bioretention rain garden, Wuerl said, "would protect God's magnificent creation ... so that future generations can enjoy it."

An impervious surface is one through which rainfall or surface water cannot flow. Such surfaces include asphalt, concrete, buildings and other covered areas, patios, tennis courts, driveways, swimming pools, parking lots and the like.

Mark Tercek, president and CEO of the Nature Conservancy, praised the cemetery's rain garden bioretention effort, saying "it will reduce storm water pollution and increase the quality of life for D.C. residents."

"This (rain garden) stands to prevent billions of gallons of urban storm water from reaching the Anacostia River and eventually the Chesapeake Bay. It is a big deal," he added.

Tommy Wells, a former member of the District of Columbia's City Council who is now director of the district's Department of Energy and Environment, noted that the Anacostia River "is one of the 10 most environmentally compromised rivers in the United States."

John Spalding, president and chief executive officer of Catholic Cemeteries of the Archdiocese of Washington, called the project one that would "improve our environmental footprint" as part of Catholic cemeteries "being fully committed to serving families" of those buried there.

Wuerl said that it was appropriate that this unique rain garden should be installed at Mount Olivet because "our cemeteries serve a significant and real purpose."

"This is sacred ground where we bury our dead," he said, adding that the cemeteries are also maintained "for family members to come and visit, reflect and remember."

Tercek, who noted that he was raised Catholic, praised the church "for its history of caring for people and the earth." He also praised Pope Francis's 2015 encyclical on the environment, "Laudato Si'."

"The pope has pushed Catholics and others to remember their responsibility to care for the environment," Tercek said. "We need to bring people together to get things done. It is what the pope has called us to do, and we are doing it here today."

Wuerl also referred to the papal document and noted that the pope is calling everyone to have a renewed commitment to care for the environment.

"We are called not only to care for our common home, this beautiful creation, but we must sustain it and pass it on to future generations, the cardinal said.

Prior to blessing the storm water retention gardens, Wuerl reminded those at the gathering that God is "the source and origin of every blessing and He has placed His children on the earth to be good stewards of these tremendous gifts … so that in all things we might honor the demands of charity."

The project was financed through a joint venture called District Stormwater LLC, founded by the Nature Conservancy's NatureVest conservation investing unit and Encourage Capital, an asset management firm based in New York, and impact capital from Prudential Financial.

Mount Olivet Cemetery, which this year marks its 160th anniversary, also will be the site of two future collaborations between the archdiocese and the Nature Conservancy. More than 150 new trees are being planted at the cemetery and works are underway for a native pollinator garden that will provide habitat for wildlife, and water filtration benefits.

Szczepanowski is on the staff of the Catholic Standard, newspaper of the Archdiocese of Washington.