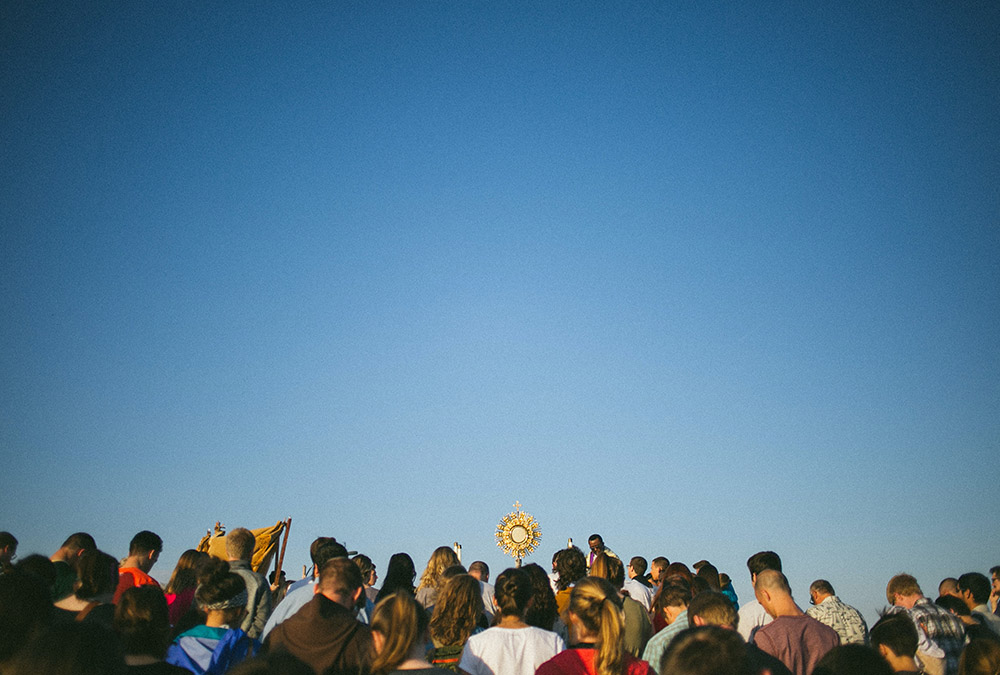 In a span of several weeks last fall, three large initiatives landed on the doorsteps of U.S. Catholic dioceses, parishes, congregations and organizations.

Beginning in October, Pope Francis opened the synod on synodality, a two-year engagement of the global church focused on listening and encounter. A month later, the Vatican officially launched its Laudato Si' Action Platform, which invites all parts of the church to take up seven-year programs to adopt sustainable and ecologically friendly practices. And just days after that, the U.S. bishops announced their own plans for what they've called a National Eucharistic Revival, a three-year project that will culminate in the summer of 2024.

The three programs make for busy schedules in the coming years for many corners of the U.S. church. But do they have anything to do with each other?

That was a question the Catholic Climate Covenant attempted to explore in a webinar Feb. 10. And it's one its half-dozen panelists answered in the affirmative.

"These three initiatives are not separate but they're deeply integral to one another. They fertilize and enhance and nourish each other," said Jesuit Fr. David McCallum, a member of the Secretariat for the Synod of Bishops and founding executive director of the Program of Discerning Leadership, a project of the Society of Jesus.

The synod on synodality, which opened Oct. 10, aims at a churchwide conversion toward a more synodal, or listening, church, through what Francis has called "the art of encounter." Through June, dioceses are conducting listening sessions with people across the world. 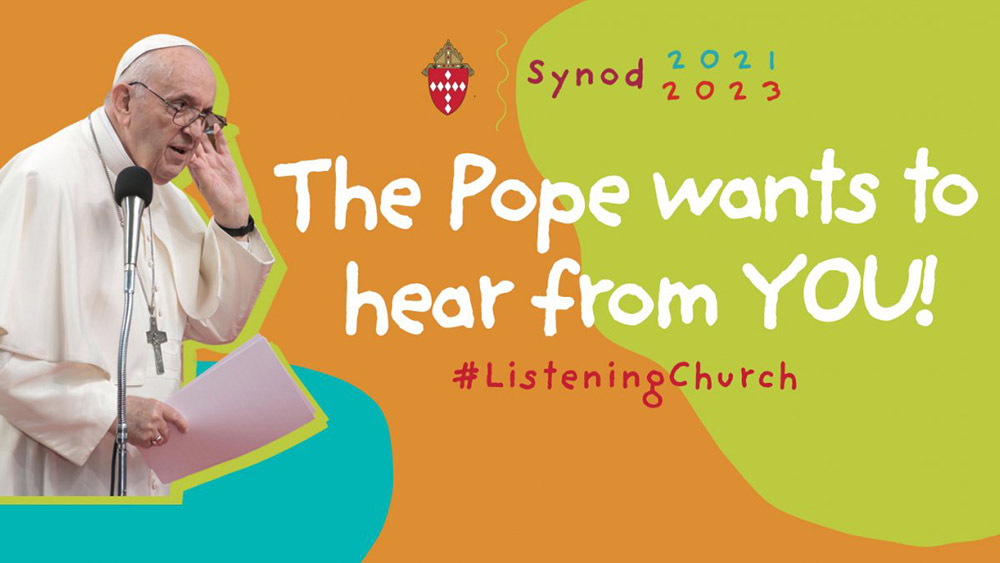 This image on the website of the Raleigh Diocese encourages Catholics in eastern North Carolina to take part in an online survey. The survey is part of the listening process for the XVI Ordinary General Assembly of the Synod of Bishops. (CNS/Raleigh Diocese)

"The aim of the synod is to relearn synodality. ... We learn it by experience," said Xavierian Sr. Nathalie Becquart, undersecretary to the General Secretariat for the Synod of Bishops.

Some see the Laudato Si' Action Platform as the perfect venue to put that vision into practice.

Jose Aguto, Covenant executive director, told EarthBeat that the synodal process "naturally flows into the Laudato Si' Action Platform," with the synod representing an opportunity for Catholics to voice, and their local church to hear, desires for greater engagement on environmental concerns and then the platform as a way to respond.

Enrollment in the action platform, a project of the Dicastery for Promoting Integral Human Development, opened Nov. 14, with more than 4,000 having pre-registered their interest ahead of that. Sign-up for the initial cohort remains open through April 22, Earth Day.

The platform has been billed as the Catholic Church's response to accelerating climate change and environmental destruction around the world. Designed around seven categories of Laudato Si' goals — which include action steps like adopting renewable energy, employing "green" investment guidelines, reducing use of single-use plastics and fostering ecological spirituality — it also offers a pathway for the ecological conversion Francis has said is critical to respond seriously and substantially to the climate crisis.

During the webinar, Kerry Robinson, executive partner with Leadership Roundtable, which is partnering with church leaders at the Vatican and in the U.S. on the synod, said that the church learning to live synodally "will have a huge impact on our ability to address the crisis of climate change together."

Other panelists on the webinar said the synod's theme, "For a Synodal Church: Communion, Participation, Mission," melds well with the platform's Laudato Si' goals, which derive from the concept of integral ecology that Francis described in his 2015 encyclical, "Laudato Si', on Care for Our Common Home." That idea stresses how all of creation, including humans, are interrelated, as are social and ecological issues, which require multidisciplinary solutions.

"There is this coherence between integral ecology and the invitation to come together [through the synod] in this collaborative way as church, as people of God," McCallum said.

He added that the synod points to a collaborative approach that is "absolutely essential" to taking on difficult challenges, especially "at a critical time in our history."

"The way in which we work on this question of conversion of social structures, of our economies, of the ways in which we relate to our resources and then give back to the planet, this too is enhanced by what we learned from synodality," he said. 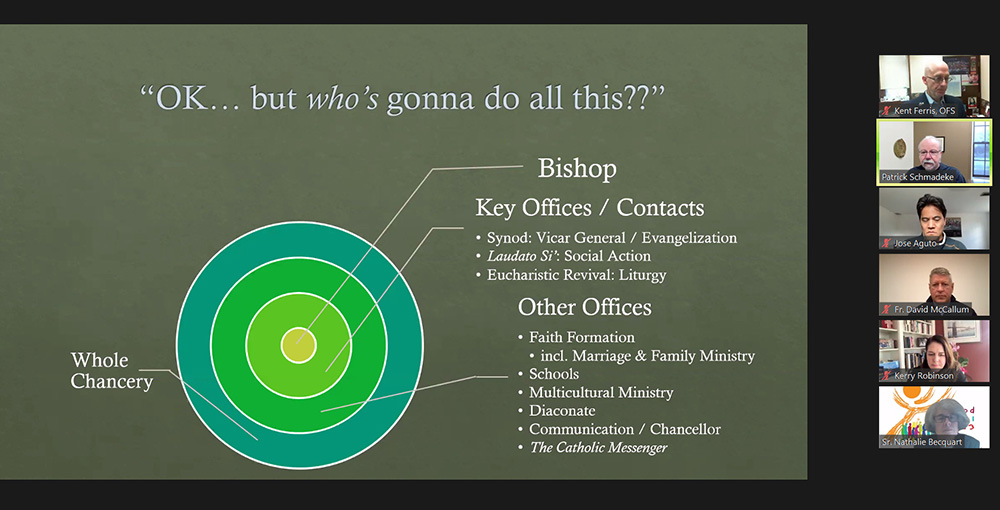 "The way to implement Laudato Si' is the way to help all our societies to really embrace this ecological conversion," Becquart said. "For the church it is the path of synodality."

Catholic Climate Covenant is encouraging its members to engage fully in the synod. It has pointed its members and cohort of creation care teams to participate in the diocesan- and parish-based listening sessions. It is also preparing to collect responses as a national organization.

"Many of our constituents have for years expressed concern and frustration that their pastors and bishops are not stepping into care for creation. ... This is that opportunity for our constituents to just say so in a very collective way and in a very honest way about desiring that their churches embrace, and in particular their parishes and dioceses, embrace of care for creation," Aguto said.

As for the U.S. bishops' Eucharistic Revival, which begins in June and will end with a National Eucharistic Congress in 2024 in Indianapolis, Aguto said the image of "one bread, one body" could help unify Catholics across ideologies and priorities and to see their work, including on creation care, as the work of all.

But how practically the synod, Laudato Si' Action Platform and Eucharistic Revival intertwine was demonstrated by the officials with the Diocese of Davenport, Iowa. The chancery staff have created a working group that meets twice a month to coordinate their efforts across the three initiatives.

Deacon Frank Agnoli, director of liturgy and deacon formation, said there were practical reasons for working together with limited personnel, "but more importantly, the primary reason is theological. If synodal describes the church, how do we make sure to approach the other initiatives in a synodal fashion?" 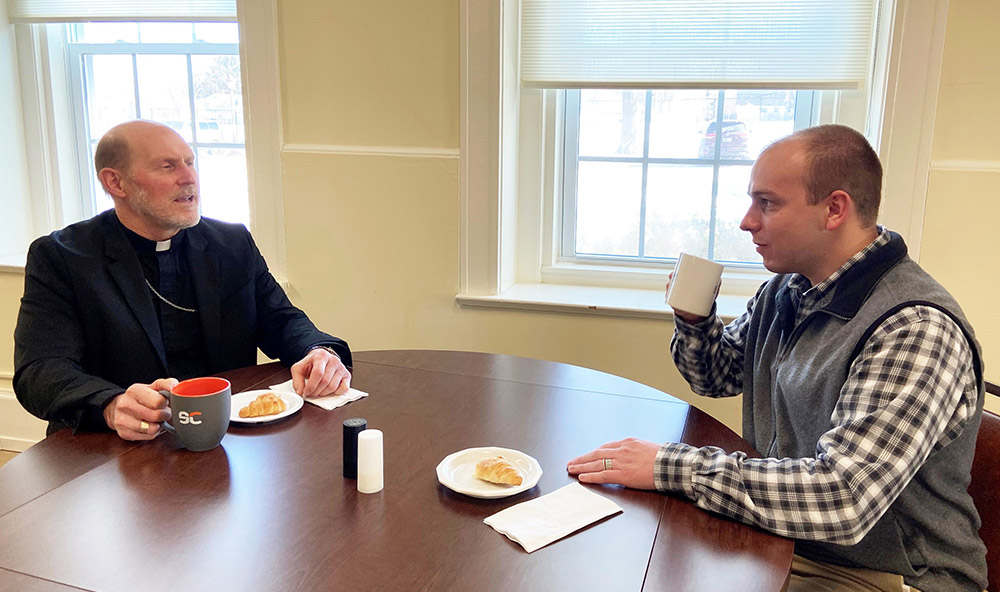 So far, the diocese has looked to raise up ecological consciousness in its outreach and planning for the synod and Eucharistic Revival, whether though its "58,000 Cups of Coffee" listening initiative or incorporating environmentally friendly practices into liturgies, such as using beeswax candles instead of petroleum-based ones and preaching on creation.

Moving forward three multiyear initiatives, without abandoning any one, takes a lot of intentionality and planning, Agnoli and others with the southeastern Iowa diocese added. Getting everyone on board with each may prove an equal challenge.

"They're all matters of great consequence for the church and for the world," she said.