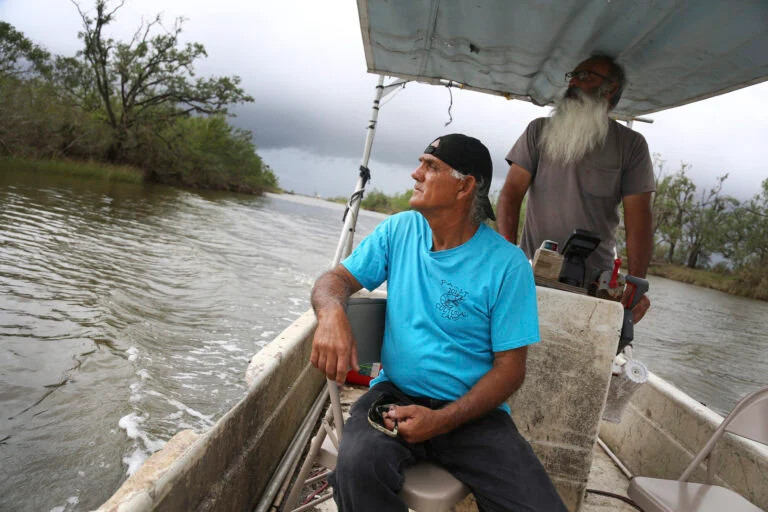 Donald Dardar, left, and Russell Dardar look toward the eroding shoreline of Bayou Pointe-au-Chien in southern Louisiana on Wednesday, Sept. 29, 2021. The brothers have lived along the bayou all their lives as shrimpers and fishermen. They now also work to preserve the coastal land from further erosion by refilling canals and developing living shorelines. (AP/Jessie Wardarski)

For Monique Verdin, the apocalypse came in 2005.

When Hurricane Katrina struck the Gulf Coast of Louisiana, about a million gallons of oil from a nearby refinery spilled into St. Bernard Parish, where Verdin lives. Her family home was engulfed in 11 feet of water.

Verdin, 42, a citizen of the United Houma Nation and member of grassroots collaborative Another Gulf Is Possible, said she realizes now how much of her early adult life — even the direction of her work — was shaped by that experience.

Unfortunately, it wasn't a once-in-a-lifetime experience. Every year, she said, the storms only seem to get more frequent and more intense. Then last year — 16 years to the day Hurricane Katrina made landfall — she found herself fleeing the coast once again as Hurricane Ida struck.

Verdin, who made the documentary "My Louisiana Love," is exhausted by the constant flight, figuring out where to go and who to stay with, she said. She's thinking through how to create spaces where people can retreat during disaster, remain in community and return home when able.

"But I also think that you can't run from climate change," she said.

Few people were talking about climate change at the time Hurricane Katrina struck, Verdin said, but they were feeling its effects even then.

Those effects are becoming more difficult to ignore, according to Lutheran Immigration and Refugee Service, one of nine agencies contracted to resettle refugees in the United States.

"Climate change will eventually be the biggest source of refugees the world's ever seen if estimates are anywhere near correct," said environmentalist and author Bill McKibben, a member of LIRS' advisory committee.

For more than 80 years, LIRS has helped resettle refugees and other people displaced by conflict and persecution around the globe. Increasingly, those people have been displaced, in whole or in part, because of climate disasters. But there are, as of yet, few pathways to protection for climate-displaced persons, also known as climate refugees.

The impacts of climate change aren't a faraway threat, though, according to Susannah Cunningham, manager for advocacy at LIRS. Rather, she said, they're familiar to many Americans.

"Americans know this story. We are feeling these stories in our families, in our homes, in our communities. And there are versions of those playing out all over the globe," Cunningham said.

Take, for instance, the deadliest and most destructive fire in California history‚ the 2018 Camp Fire that incinerated the town of Paradise, she said. Or the three 500-year rains that flooded Cunningham's hometown of Houston three years in a row.

In the U.S. and beyond, the effects of climate change-related disasters are worsening humanitarian crises and driving people to relocate, according to LIRS, which released its first report on the impact of climate change on migration last year — as did the White House.

The United Nations High Commissioner for Refugees estimates more than 20 million people are forced to leave their homes and move to other areas of their countries every year by extreme climate disasters.

Relocating is never easy, and some populations face additional challenges to do so, according to Cunningham.

'But I also think that you can’t run from climate change.'

For members of minority groups in places like Somalia, a climate disaster would mean relocating over international borders, she said. They're not safe in many areas of their home countries.

For many Indigenous peoples, spirituality and culture are tied to the lands where they've lived for generations. Leaving the land means losing sacred spaces, plants needed for medicine and ceremonies and access to culture bearers who carry Indigenous wisdom, history, language and songs, Elizabeth Crocker of the American Association for the Advancement of Science told journalists at the Religion News Association's annual conference last month in Bethesda, Maryland.

The Pointe-au-Chien Indian Tribe is one of four coastal Louisiana tribes that filed a formal complaint with the U.N. in 2020, claiming the U.S. government had violated their human rights by failing to act on climate change.

The only reason Pointe-au-Chien citizens have left their homes in Lafourche Parish is because of land loss, Dardar said.

And she described their neighbors on Isle de Jean Charles as the "first climate change refugees," though she said she dislikes the term.

"Even though you take us off a piece of land and you put us in another place, it doesn't matter, because at one time it was all Native American land," Dardar said. "So no matter where you move us, we're not refugees. We're still in our land." 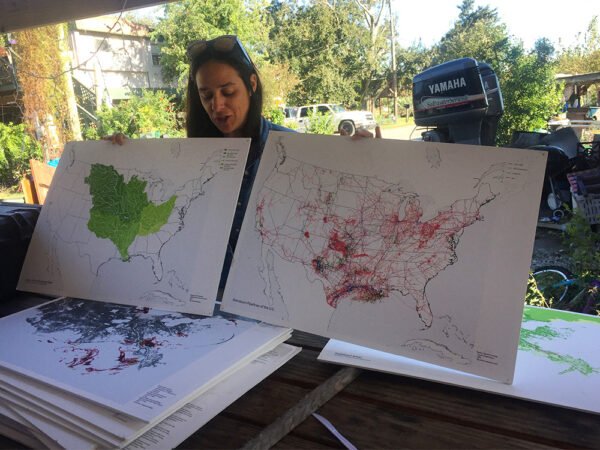 The Isle de Jean Charles Band of Biloxi-Chitimacha-Choctaw Tribe are resettling with assistance from the first federally funded program to relocate residents endangered by the impacts of climate change. Their island home in the bayous of Terrebonne Parish has lost much of its land to severe storms, subsidence, coastal erosion and rising sea levels, according to the Isle de Jean Charles website.

The "iron law" of climate change is, the less one did to cause it, the sooner and harder one is impacted by it, according to environmentalist McKibben.

That's one reason people of faith should care about the growing climate crisis. The Hebrew Bible and the Gospels are full of messages about welcoming the stranger and loving one's neighbor, he noted.

And when it comes to Scripture about caring for the environment, he said, "You don't really have to pass the first page, do you?" The biblical book of Genesis opens with the story of creation.

"Those two things seem to me to dictate that we work hard to stop climate change and we work hard to take care of the people who've been damaged by that which we can't stop," said McKibben, who is United Methodist.

The facts are bleak: 2020 was the most active hurricane season in U.S. history, according to the environmentalist. The fossil fuel that causes climate change is the thing allowing Russian President Vladimir Putin to wage war in Ukraine, he added, which alone has created more than 5 million refugees.

'Americans know this story. We are feeling these stories in our families, in our homes, in our communities. And there are versions of those playing out all over the globe.'

But there also are things people can do and reasons to hope, he said.

McKibben said he is encouraged by solutions like solar and wind power and by the growing movement to address climate change, led especially by young people like Greta Thunberg and groups like Young Evangelicals for Climate Action.

LIRS continues to provide assistance for climate displaced persons and to advocate for more lasting protections for them, including a pathway to U.S. citizenship for those unable to return to their homes.

And, in the face of despair, Verdin is planting a garden.

She is planting maypop and goldenrod, elderberry and wild onions, medicinal plants that can be used to relieve anxiety or to create natural dyes. She chooses plants that are in danger of disappearing along with the coastline, moving them to a plot of land further inland and hoping they'll adapt.

She'll see how they take, she said.

It reminds her that humans may not live to see the results of their actions, she said, but she can still do her part.

"The seas are rising here. We're witnessing that," Verdin said.

"We're learning how to adapt to it. We just have to think of things a little differently, and we also have to remember that you have to respect nature. We can't control it or manipulate it anymore."