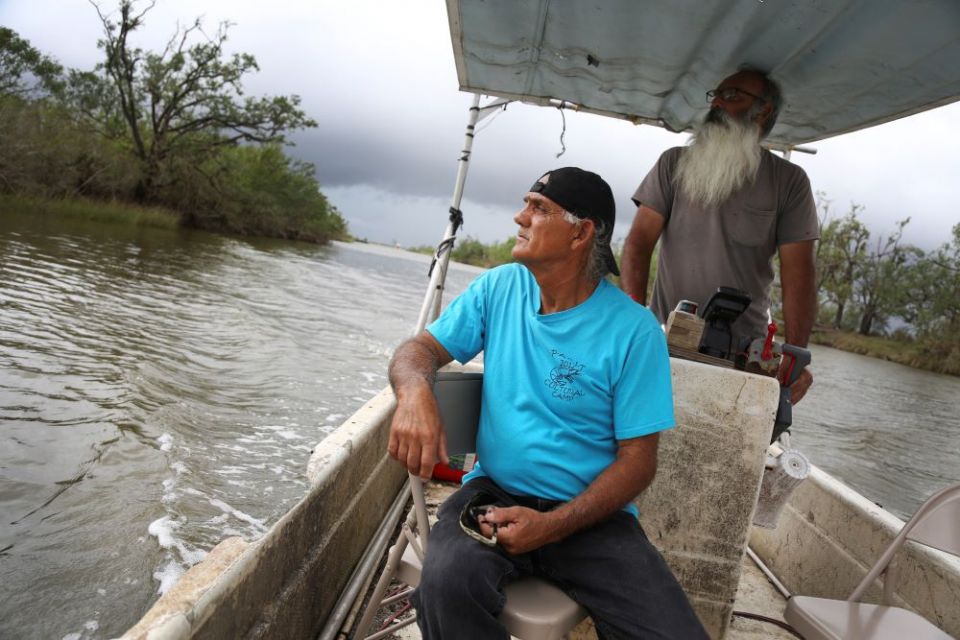 Donald Dardar, left, and Russell Dardar look toward the eroding shoreline of Bayou Pointe-au-Chien in southern Louisiana in September. The brothers have lived along the bayou all their lives as shrimpers and fishermen. They now also work to preserve the coastal land from further erosion by refilling canals and developing living shorelines. (AP/Jessie Wardarski)

POINTE-AUX-CHENES, La. — On a boat ride along a bayou that shares the name of his Native American tribe, Donald Dardar points to a cross marking his ancestors' south Louisiana burial ground — a place he fears will disappear.

He points to the partly submerged stumps of oak trees killed by salt water on land where he rode horses as a kid, and to his mother's home, gutted by Hurricane Ida. He and his wife have a mission: protecting Pointe-aux-Chenes and other communities at risk in a state that loses about a football field's worth of wetlands every 100 minutes.

For years, Donald and Theresa Dardar have joined forces with the Rev. Kristina Peterson. Working with scientists and members of Pointe-au-Chien and two other tribes, they've set out thousands of oyster shells to protect sacred mounds, obtained financing to refill abandoned oil field canals and built an elevated greenhouse to save their plants and medicinal herbs from flooding.

"It's saving what we know that's going to be destroyed from both the change of the heat and the rising of the water," said Peterson, the pastor of Bayou Blue Presbyterian Church in Gray, Louisiana, and a former professor of environmental planning at the University of New Orleans.

Their vital work to save their bayou home and heritage is part of a broader trend around the world of faith leaders and environmental activists increasingly joining the fight against climate change. From Hindu groups joining river cleanups and Sikh temples growing pesticide-free food, to Muslim imams and Buddhist monks organizing tree-planting campaigns, the movement knows no denominational boundaries but shares as a driving force a moral imperative to preserve what they see as a divinely given environment for future generations.

'We should be caring for Mother Earth, not abusing her.'

But some of them believe systemic change to protect those most vulnerable to the climate crisis must also come from world leaders meeting at the U.N. climate conference in Glasgow, Scotland.

"It's up to them to step up to the plate and do what they're supposed to do," Theresa Dardar said at the tribal center where she handed out supplies to members of her tribe and others who lost their homes after Hurricane Ida hit the small fishing community 80 miles (about 130 kilometers) southwest of New Orleans.

"It's up to you not to just give lip service, but to take action against climate change and sea level rise," said Dardar, a longtime religion teacher at a local Catholic church and head of the environmental nonprofit Lowlander Center.

Pope Francis and dozens of religious leaders recently signed a joint appeal to governments to commit to targets at the Oct. 31-Nov. 12 summit in Glasgow. The summit aims to secure more ambitious commitments to limit global warming to well below 2 degrees Celsius with a goal of keeping it to 1.5 degrees Celsius compared to pre-industrial levels. The event also is focused on mobilizing financing and protecting threatened communities and natural habitats.

Louisiana holds 40%  of U.S. wetlands, but they're disappearing fast — about 2,000 square miles (5,180 square kilometers) of the state have been lost since the 1930s. That's about 80% of the nation's wetland losses, according to the U.S. Geological Survey.

Peterson arrived in Pointe-aux-Chenes in 1992 after Hurricane Andrew, following a call to link scientists with communities hit by storms, sinking land and sea rise from climate change. Through the Lowlander Center that she co-founded, she worked to protect sacred sites from coastal erosion, refill canals dug by oil companies that allow for saltwater intrusion and build the greenhouse set to open in October. Instead, it was repurposed as a food pantry supply room after Ida.

"There's been so much that has been interrupted ... and these are all critical, critical things," Peterson said.

"We're not going to wait on world leaders to take action. We're doing it now," she said. With Theresa Dardar, they're part of the Greater New Orleans Interfaith Climate Change Coalition, which includes Buddhist, Baha'i, Christian, Jewish and other faith leaders.

'We're not going to wait on world leaders to take action. We're doing it now.'

They've also worked closely with Chief Shirell Parfait-Dardar of the Grand Caillou/Dulac Band of Biloxi-Chitimacha-Choctaw Indians. She's the first woman to lead her tribe and the only Indigenous woman on the Louisiana governor's climate change task force. Last year, her tribe and Pointe-au-Chien were among those that  filed a formal complaint to the U.N. in Geneva, saying the U.S. government violated their human rights by failing to act on climate change.

"We should be caring for Mother Earth, not abusing her. This is a result of all of the abuse that we've done to her," she said, tearing up and pointing to her home, destroyed by Ida. "If we don't listen to the science, if we don't listen to the wisdom of the elders, we're going to ... keep seeing these massive amounts of destruction."

Religious communities are crucial in the fight against climate change, said Nathan Jessee, a researcher at Princeton's High Meadows Environmental Institute who has worked with the area's Indigenous communities.

"There's a long history of faith-based leaders and Indigenous peoples being at the forefront of these struggles for environmental justice," Jessee said. Together, he said, they've demonstrated the fight for clean air and water is a moral and spiritual struggle.

For many faith leaders, preserving the environment is part of their mandate to care for communities most vulnerable to climate change. It's a call that Pope Francis has made often, most broadly in his 2015 encyclical, "Laudato Si', on Care for Our Common Home." It has been echoed by imams, rabbis, patriarchs and pastors who share how their faith traditions interpreted the call.

People of color, the poor, women, children and the elderly suffer the worst climate change impacts, said the Rev. Fletcher Harper, an Episcopal priest and executive director of GreenFaith, a global multifaith environmental organization based in New York. "For religious people, that is utterly unacceptable," he said. 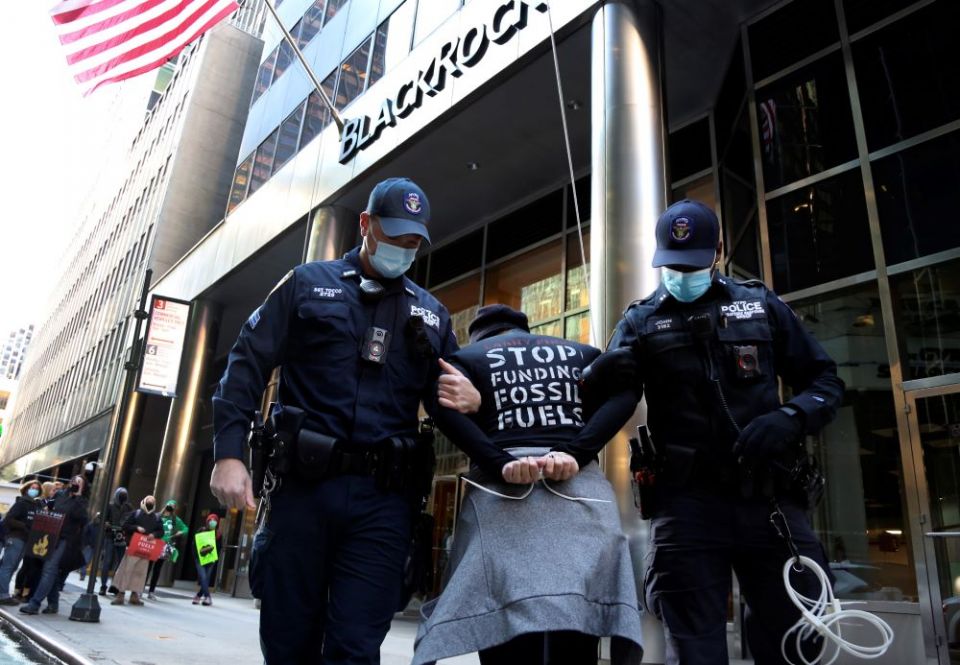 Climate activist Rev. Chelsea McMillan, center, is arrested Oct. 18 after an interfaith demonstration outside the headquarters of BlackRock, a multinational investment management corporation, in New York City. The protest was one of more than 500 actions in the Faiths for Climate Justice global mobilization, held two weeks before the United Nations Climate Change Conference. (AP/Jessie Wardarski)

GreenFaith organized other actions across the globe: In Fiji, the leader of the Pacific Council of Churches was photographed on an island that goes underwater at high tide because of rising sea levels. In Jakarta, Indonesia, the largest mosque in Southeast Asia unfurled a banner that read: "Destroying the planet is haram" — forbidden. In Australia, religious groups protested coal production and urged the prime minister to undertake bold climate action.

"The biggest plus in terms of where we are now is that there is an impatient, feisty, unstoppable grassroots movement," Harper said.

Religious groups including the World Council of Churches also have joined the fossil fuel divestment movement. "This isn't just a stunt," said Harper, whose organization has backed such faith-based efforts since 2013. He said it evolved from a symbolic gesture to a key road map into the future.

Not all religious decision makers are on board with divestment nor is every member of a faith tradition of like mind. In the Presbyterian Church (U.S.A.), the general assembly voted in 2018 to continue engaging with fossil fuel companies it holds stock in.

The issue is expected to be raised again in the 2022 general assembly. "The concern with divestment was that there wasn't anything in there for the transition of workers — to go into alternative energies," Peterson said.

Not all the faithful believe in renewable energy or even accept the science behind global warming.

"White evangelical Christians are some of the most suspicious of climate science and the least accepting of solutions to address it," said the Rev. Kyle Meyaard-Schaap, vice president of the Evangelical Environmental Network. His ministry navigates that suspicion by connecting climate science to faith rather than politics, emphasizing authority of scripture and sanctity of human life.

That same belief guided volunteers from Churches of Christ who recently brought boxes of food to the tribal center in Pointe-aux-Chenes. A month after Ida, piles of debris, wrecked boats and destroyed homes lined the bayou that runs through the town. Many were living in cars and tents.

"The scripture tells us that we're supposed to be good stewards of what God gave us," said Jaime Green, a volunteer from New Orleans who often speaks about climate change at the Elysian Fields Church of Christ her husband leads.

"As a faith community, we have to be teaching our congregations and our children, generations to come that they need to take care of what we have, and preserve it as much as we can — and even work to undo some of the damage."

[AP journalists Holly Meyer in Nashville, Tennessee, Nicole Winfield in Rome, and Janet McConnaughey in New Orleans, contributed to this report. Associated Press religion coverage receives support from the Lilly Endowment through The Conversation U.S. The AP is solely responsible for this content.]