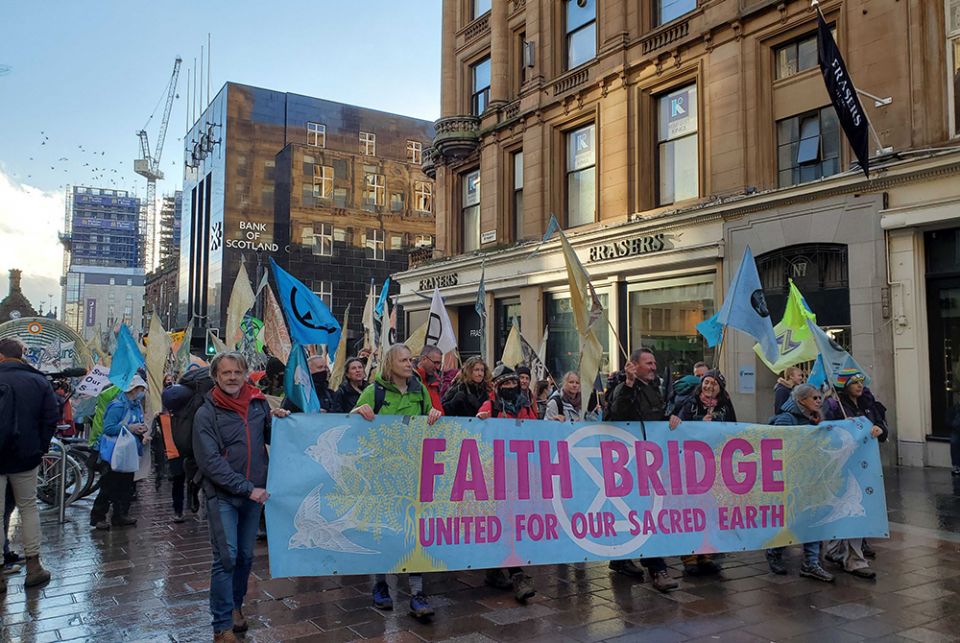 For a fortnight, the international faith community has had a widespread presence at the United Nations climate change conference in Glasgow, Scotland, known as COP26.

They led prayer services, joined pilgrimages and marches, delivered petitions, spoke on panels and organized side events. Pope Francis sent a powerful message, and the joint appeal he and other world faith leaders issued in advance hangs framed between the main plenary halls inside the Scottish Events Campus.

Within the conference, people of faith have served as members of official national delegations and in observer roles, watching government negotiators stress their priorities for the summit, namely keeping the 1.5 degrees Celsius max temperature rise goal in sight, delivering long-promised funding of $100 billion from developed to developing nations, and signaling the end of the fossil fuel era.

While COP26 is coming to a close, though expected to spill into extra time, the work does not end, especially for the faith communities playing a role in the ongoing effort to combat climate change, said Iyad Abumoghli, director of the Faith for Earth Initiative of the United Nations Environment Programme.

"COP26 will not solve all the issues of climate change. It is an important meeting. Issues are of high importance because the science is telling us we don't have time," he told EarthBeat in a video interview, adding that the actions of faith-based organizations before and during the summit are "setting a precedent for faith leaders to be engaged" well afterward. 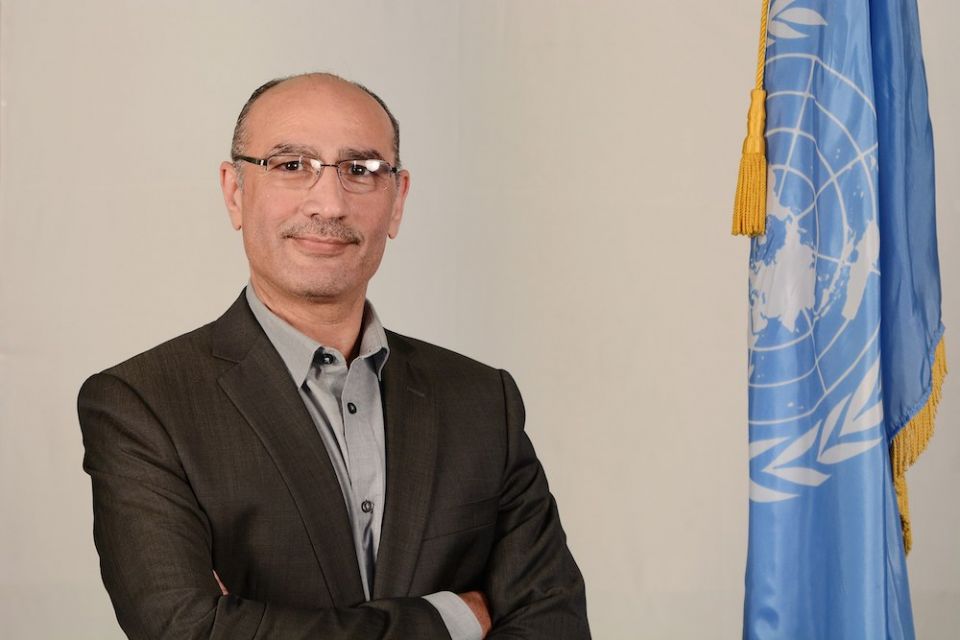 "Our goal is not COP26 only," Abumoghli said. "We need to demonstrate the sustainability of our efforts towards making the world really safer, in terms of living in a healthy environment and a healthy planet, to ensure that people live in prosperity. And that requires continuous engagement all over."

Since 2017, the Faith for Earth Initiative has worked to engage faith leaders on environmental issues, including climate change, the dramatic rates of biodiversity loss and the health threats of pollution.

Last year, it co-published a book on world religions' shared beliefs about respecting and protecting creation. It has also collaborated with faith-based investment institutions seeking to "green" their assets and investments, including the recently launched FaithPlans program. And it has worked to bridge understanding between theology and science.

In early October, more than 40 religious leaders, including the pope, issued an unprecedented joint appeal to COP26 calling for "urgent, radical and responsible action" to turn the tide of rapidly rising temperatures. The UNEP faith program helped organize the event "Faith and Science: Toward COP26" at the Vatican, including months of meetings with leading scientists, and ahead of the climate summit has convened multifaith working groups about how they can contribute, through both their voices and collective actions.

Abumoghli, who attended the "Faith and Science" event, spoke with EarthBeat before COP26 about the Faith for Earth Initiative and the role religious leaders can play in Glasgow and beyond. This interview has been edited for length and clarity.

EarthBeat: For UNEP, what is the significance of engaging the faith community, especially on climate change? Why is it putting this effort into engaging the world of religion?

Abumoghli: Well, we look at it from different perspectives. First of all, environment is a unifying subject of all religions. So [almost] all religions address living in harmony with nature. In different styles but leading to the theme that we need to live in harmony as we have been doing so for centuries. So this is a unifying message.

The second is the power of reach of religious leaders and faith-based organizations. And according to the research, more than 85% of the people relate to a religion or belief. So they have a point of reference for their personal behavior and relationship with nature, which is the [scriptures] and the religion or the belief they believe in. And faith organizations or faith institutions do reach to every corner of the world, so wherever you go, you will find a mosque or a church or a synagogue. This is unprecedented, and no other international organization even collectively can get to that level of reach to the people themselves.

Third, when you discuss with scientists or politicians about climate change, you can debate, you can tell them that your predictions, your scenarios and so on might not be 100%, although the science has established it without a doubt. But usually, people do argue with scientists and with politicians. But when you talk to a faith leader, and the faith leader tells you that it is written in your scripture that you have a responsibility, you wouldn't debate or have a dialogue. You would say "Amen" and "I submit to what I believe." So the power of words of the faith leaders is important.

Representatives of various world religions participate in a multifaith dialogue at Glasgow's Garnethill Synagogue Oct. 31, the evening of the opening day of the U.N. climate conference. (EarthBeat photo/Brian Roewe)

And finally, if you put the assets of all faith institutions together, they would constitute a country twice the size of the United Kingdom. In terms of the buildings they have, for example, more than 37 million churches around the world, 6 million mosques, dozens of millions of temples and so on. So this is a country, a big country.

But also they are the third-largest economic power on Earth. And they own trillions of dollars in investment. And this is how they are able to service their communities and build schools and hospitals. They own 50% of the schools across the globe. They own more than 30% of hospitals and clinics. They own more than 8% of the habitable land on Earth. This economic power puts a responsibility on the shoulders of such organizations to be sustainable in their investments and their financial transactions. So we work with them on greening those financial transactions and investment.

All of that, if you consider it, you are talking to a huge constituency that can make a difference if they apply the principles of living in harmony with nature, a no carbon-based economy and what have you, then you can also achieve some of the goals. But they also do impact and influence member states. And when a political leader wants to approach the people, the public, they show how religious they are, right? So there is an influence, a huge influence of faith leaders that we want to harness. 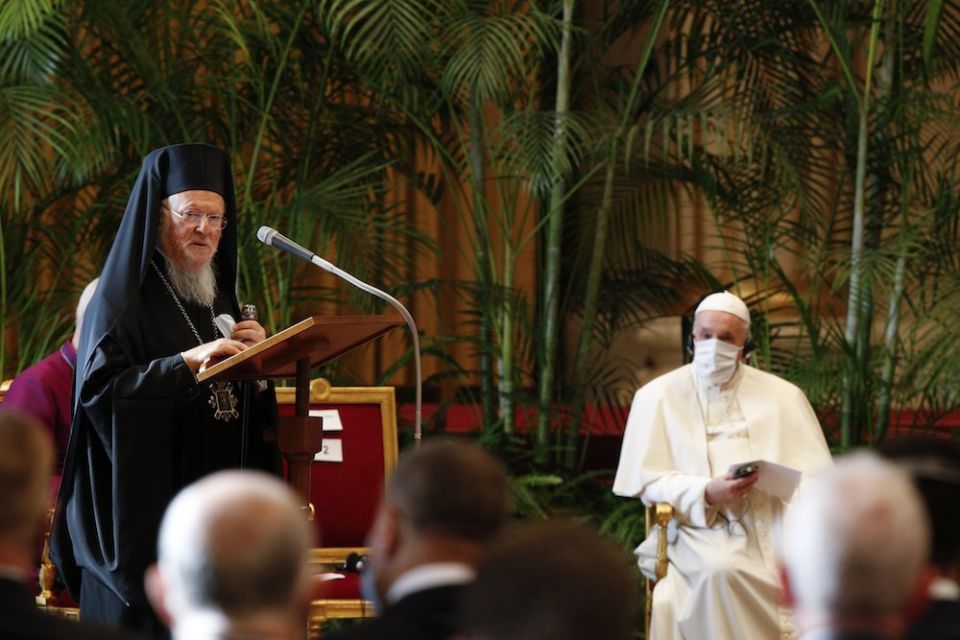 Ahead of COP26, leaders of world religions, including Pope Francis, met at the Vatican and issued a joint faith appeal to the Glasgow summit. What is the significance you see in that statement, and what potential impact do you see that having at COP26?

First of all, the appeal itself is a very balanced appeal. And it has been really formulated with COP26 in mind, but also ... the aspirations of the people and what [has] been discussed in the corridors of policymakers. So it is a sort of a comprehensive appeal that touches upon all elements of the Paris Agreement and the COP26 high-level issues that will be discussed. 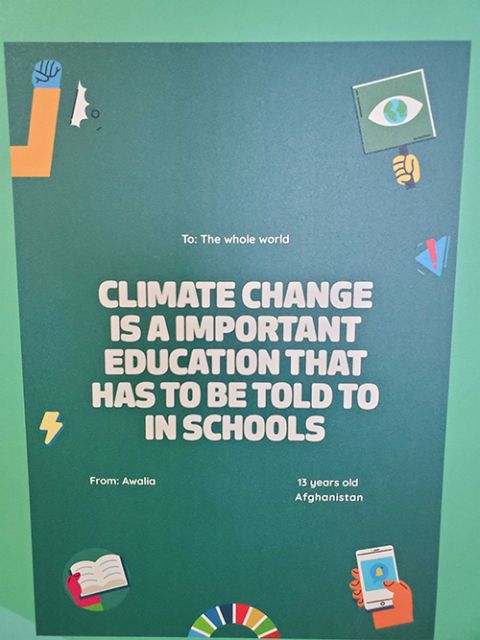 Signs displayed in the COP26 Blue Zone, the main site of the U.N. climate conference, share messages from children across the globe to world leaders on the importance of education about climate change. (EarthBeat photo/Brian Roewe)

So it tells policymakers that religious leaders are watching, and they understand what are the issues that are needed to be addressed. And they are calling for a high-level ambition by member states. But also at the same time they're telling them there are underlying causes, or underlying areas, where we need to address.

For example, education. Education that leads to science-based evidence. Education that leads to behavioral change and so on, and also sustainable lifestyles. Climate change is anthropocentric. So it is the actions of the people [that] have led to where we are today. … So the faith leaders are telling [head of governments] that we are holding you accountable, but also we are holding ourselves accountable, and this is why they are making some commitments in the appeal itself.

The appeal was submitted to the president of COP26, and this is historic. Of course, some interfaith leaders or faith leaders have been talking at [previous] COPs, but this is the first time that a president of COP26 [was] called to attend an interfaith meeting and be submitted an appeal, which we hope will be influential and will provide political leaders with something to base their policies and political agreement on … to take bold and courageous decisions to halt investment in coal-based or fuel-based industries and look to the future.

What are your expectations for COP26? And what would make it a successful summit in your eyes?

Well, definitely the aspiration of the people is that we need the commitments of member states that keep us below the 1.5 degrees [Celsius] and maximum 2 degrees [goals in the Paris Agreement]. And I have been seeing some member states who are actually taking a bold and courageous decision to over the next 20 years or so to reduce their carbon emissions and so on.

My expectation is just listen to the science and believe in what the Intergovernmental Panel on Climate Change is saying. We only have probably less than eight years to get to 1.5 degrees. And even if we stop all of our emissions, we will continue to face climate change issues. So we need to change to transform our mentality, our economic system, our development to be based on renewables rather than on fuel-based economies.

I am hopeful that member states and the international community will understand this equation and will come to a point and say, "Well, we are all in this together, so if I don't commit today that means I am increasing the possibility of not getting to the threshold that the science is telling us about."

Well, it's a call for faith leaders and faith institutions that it doesn't stop at COP 26. And our goal is not COP26 only. We need to demonstrate the sustainability of our efforts towards making the world really safer, in terms of living in a healthy environment and a healthy planet, to ensure that people live in prosperity.

And that requires continuous engagement all over. And we need to transform all of our actions toward sustainability and equality for all the people.