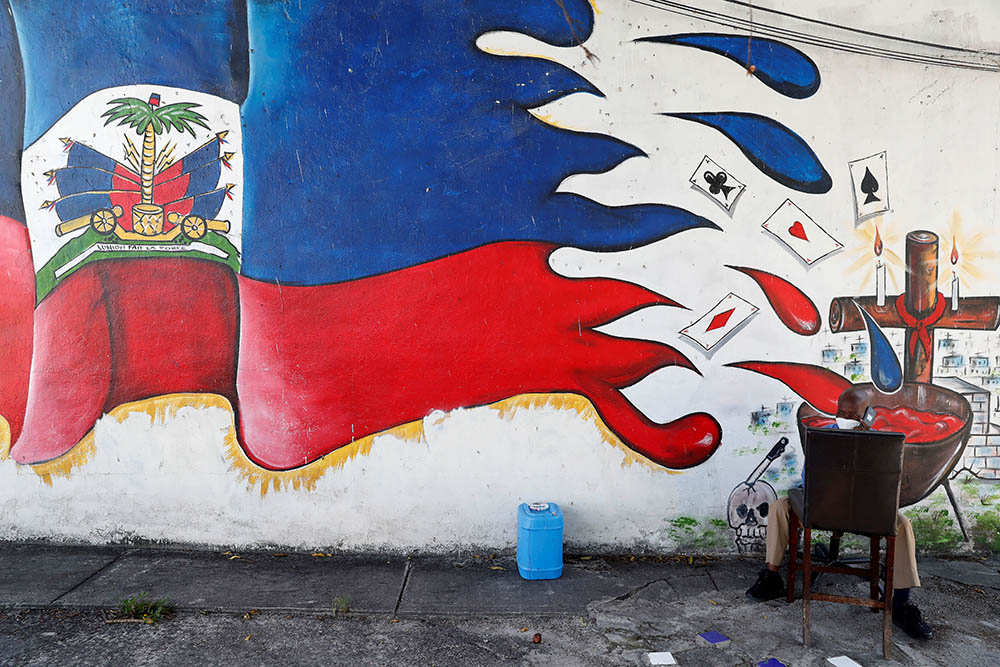 A man speaks on a phone next to a mural in the Little Haiti neighborhood of Miami July 8. (Newscom/Reuters/Shannon Stapleton)

On a sunny June day in Miami, there's not a cloud in the sky, but the streets near the beach are awash with seawater. Small waves ebb and flow across Collins Avenue as passing cars creep along leaving small wakes. This "sunny day flooding," as it's called, happens frequently now in Miami Beach, as the sea encroaches inland with higher and more frequent "king tides."

Climate change is now a fact of life, especially in Miami, and Florida tops the list for projected property losses. According to Risky Business, which measures economic effects of climate change, Florida could lose between $5.6 billion and $14.8 billion by 2030.

Four miles inland, in the neighborhood known as Little Haiti, under the same sunny sky, streets are dry. There's no flooding because it's on the Miami Rock Ridge, a limestone deposit formed about 130,000 years ago along Florida's eastern coast. At 7-14 feet above sea level, it's home to some of Miami's highest real estate — and to many low-income families.

In recent years, Miami Beach has seen an annual population decline of about 1%, according to a demographic study by the World Population Review.

Now, as climate change accelerates, there's a steady retreat from the beach of people searching for higher ground. An analysis by Climate Central found that more than half the residents of 100 towns and cities in Florida live fewer than 4 feet above the high-tide line, making them particularly vulnerable to flooding from storm surges. Miami-Dade and Broward counties each have more residents in that risk area than any state except Florida itself and Louisiana.

In light of the recent building collapse in Surfside, some beach residents are reassessing their proximity to the ocean as the sea slowly reclaims coastal land. Many area residents are fearful their buildings are compromised; two other condos nearby were evacuated, and even the old Dade County courthouse was emptied over safety concerns.

In the last decade, several developers have purchased land in Little Haiti, with elaborate plans for high-rise condos and swanky shops. Local residents worry that it will alter the culture they've established over the last 50 years. Though there are no official statistics reflecting why people move away, locals say rising rents have forced many residents and businesses to seek new homes.

"There's both good and bad" in development, Fr. Reginald Jean-Mary, pastor at Notre Dame d'Haiti Mission, told EarthBeat. "They are building in an unjust way, and It affects the whole community. It impacts small business and uproots people that have been here for 50 years." 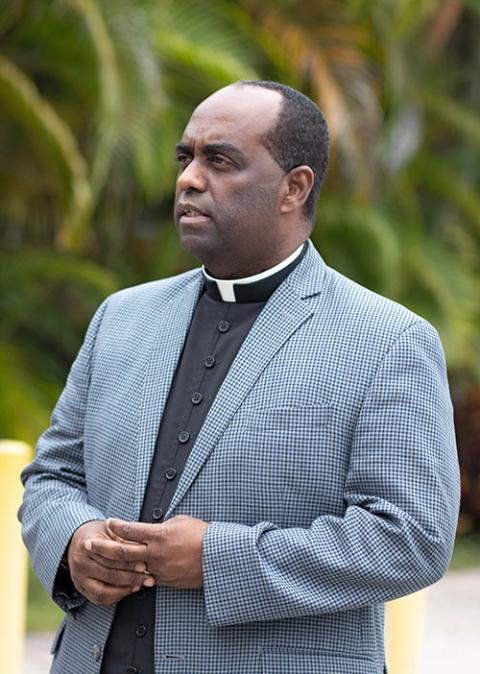 "The developments coming into Little Haiti plan high-rise buildings and will raise taxes for the whole community," he said. "Everyone's taxes will go up. And if rents rise, then some small businesses, like local corner markets, close, leaving a hole for local residents."

Jean-Mary has served as pastor at Notre Dame d'Haiti for 20 years and is a powerful advocate for Little Haiti's citizens. Nestled in the heart of the neighborhood, it's a mission church with more than 2,000 parishioners, a haven for the Haitian community. He's watched as real estate prices in Little Haiti soar.

"We need more affordable housing," he said, "and more emphasis on going green."

A recent search on the Zillow real estate website found 41 single family homes listed for sale in Little Haiti, with price tags from $235,000 to $1.8 million. The average income of most residents in the neighborhood is $51,000, according to the 2018 U.S. Census, the latest available.

For Tessa Painson, of the Haitian American Community Development Corporation (HACDC), home prices are way too high. Developers say an increase in property values is good, but Painson disagrees, citing a lack of affordable housing.

Developers "are coming into a low-income community," she said. "I saw it happen in midtown [Miami]. First the taxes go up, then rents, displacing many residents who've lived in this neighborhood for much of its 50-year history."

"Most of the properties are owned by LLCs, and the rents are rising, forcing many of Little Haiti's residents to relocate," she said. "I don't think the city's doing a good job, because they're not meeting the community's needs." 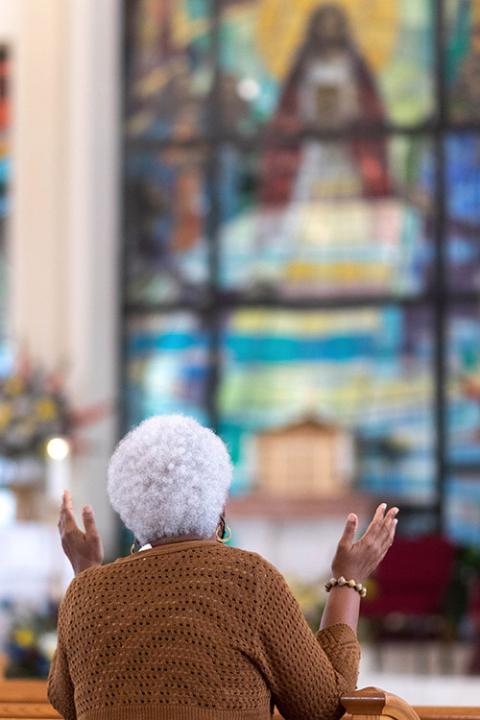 Painson added, "Many [Haitians] are moving to North Miami and even out of state. It's mostly the older generation in Little Haiti now, and some have language and literacy challenges not facing the younger generation, and they take these limitations with them if they move."

Some younger Haitian Americans are returning to Little Haiti, but for many it's unaffordable.

HACDC offers help for immigrants, with classes on economic literacy, home ownership and other life skills to navigate a new country. It partners with banks for funding to build affordable housing, something the proposed condos lack.

Painson said the developers charge $1,600 monthly for a one-bedroom apartment, which is high for most local residents, but HACDC offers a much more affordable two-bedroom for $1,000.

Seeteram, a doctoral candidate in Earth system science at Florida International University in Miami, researches climate migration, including the emerging phenomenon of sea-level rise. She wants to understand the varying effects of rising sea levels — 1 meter, 2 meters and more — in a variety of areas across Miami over time.

"We need to study the dynamics to create policies allowing folks to internalize the reality they have to move and prepare now, not wait until 2060, when predictions show many coasts will be underwater," Seeteram said. "There's a need for money and capital to increase to address this issue so people are prepared." 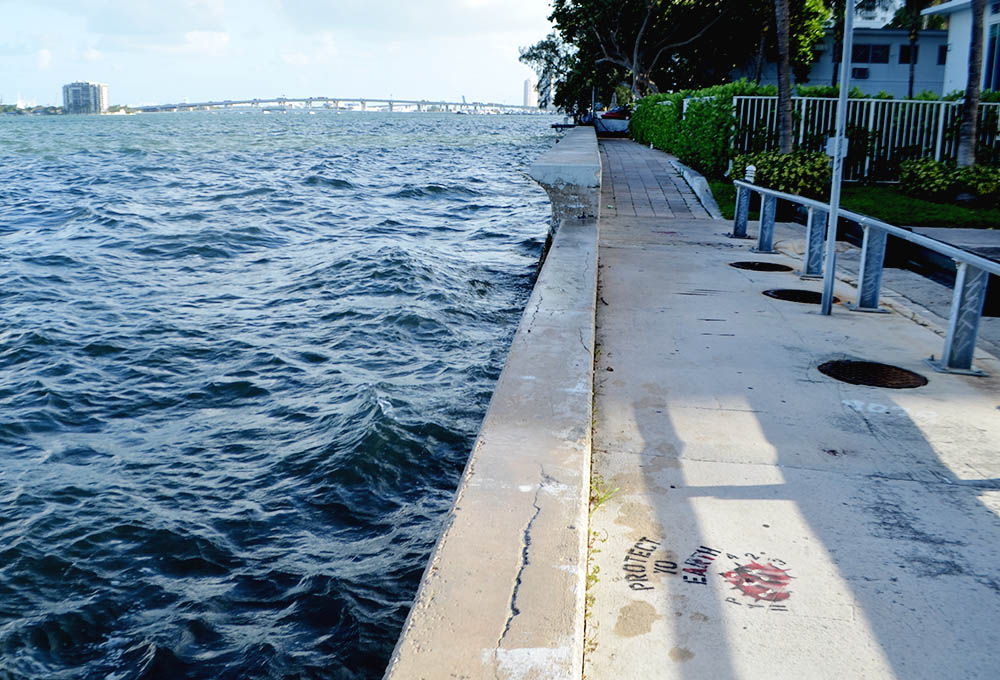 New name for an old neighborhood

Little Haiti, a small neighborhood of just 3.5 square miles, is home to about 33,000 residents, most from Haiti and the Caribbean. In 2016, Miami approved renaming the neighborhood Little Haiti. It was a huge community victory in its long time fight for recognition.

Once called Lemon City, the neighborhood is one of the oldest parts of Miami, at the north end of Biscayne Bay. Miami's pioneers settled the high ground, elevated above the swampy coastal marsh that became Miami Beach. Modern technology has enhanced the stability of these fragile coastal islands, creating some permanence with sea walls, jetties and groins. But even much of this powerful technology is not immune to current sea rise.

Today, a statue of Gen. Toussaint L'Ouverture, Haiti's liberator, guards a corner park to remind everyone Haiti was the first free Black nation in the New World.

It's a unique community, with a flavor of the islands. Signs are in Creole, and many residents speak the gentle patois. The aroma of pungent spices fills the air as mom-and-pop restaurants prepare lunch. Colorful murals adorn many walls, depicting scenes precious to the Haitian community. The neighborhood has a culture all its own.

That makes looming plans for development even more jarring. 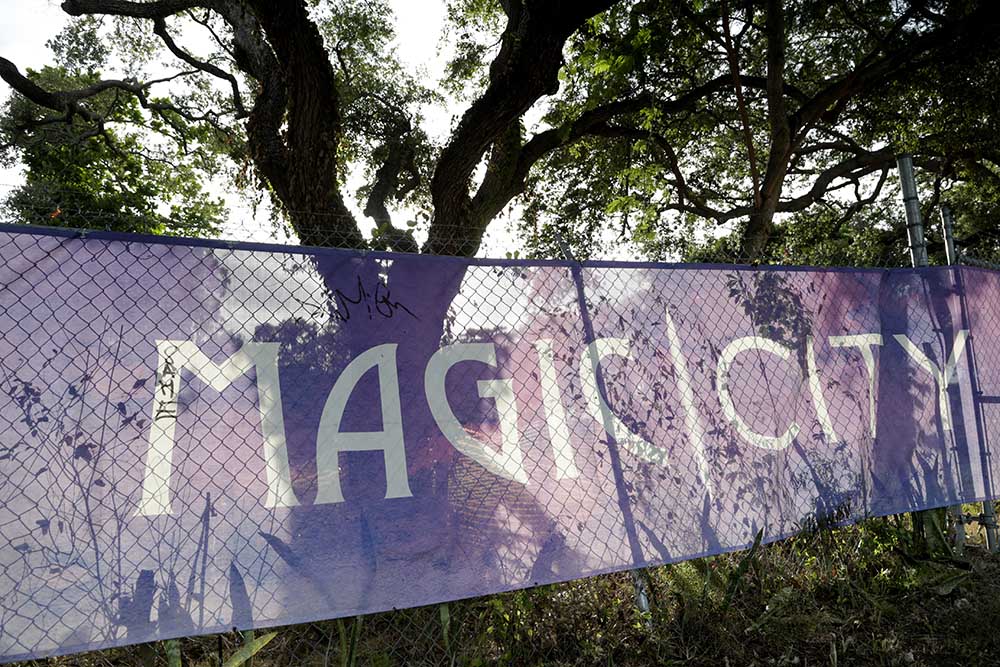 A sign on a fence in 2019 advertises the future Magic City Innovation District set to be built in the Little Haiti neighborhood of Miami. (AP/Lynne Sladky)

With a name that sounds like a tourist attraction, Magic City is billed as an "innovation district" consisting of 18 acres of high-rise condos, office space, shops and a hotel. The buildings would tower over the neighborhood's modest one- and two-story homes. In 2019, the developers earned approval from the city of Miami commissioners for a $1 billion development that could transform Little Haiti, and speed up gentrification.

In March, the Magic City Innovation District paid $3 million to the city's Little Haiti Revitalization Trust, an agency charged with oversight of the city's "revitalization efforts for the redevelopment of the area." Miami Mayor Francis Suarez was pleased, but local residents remain skeptical.

"Gentrification is real, but it's moments like this that remind us that we have to create a Miami that's not only here forever, but that is here for everyone," Suarez said at a press conference announcing the deal.

But some community leaders feel developers are sidestepping their demands.

A vote on the 22-acre Sable Palm Village, a massive high-rise complex that would have displaced 2,500 people, was delayed in June by the zoning commission, but it's not off the table. Local residents fear these large projects will speed up gentrification, increase traffic and just be out of scale with what's there. 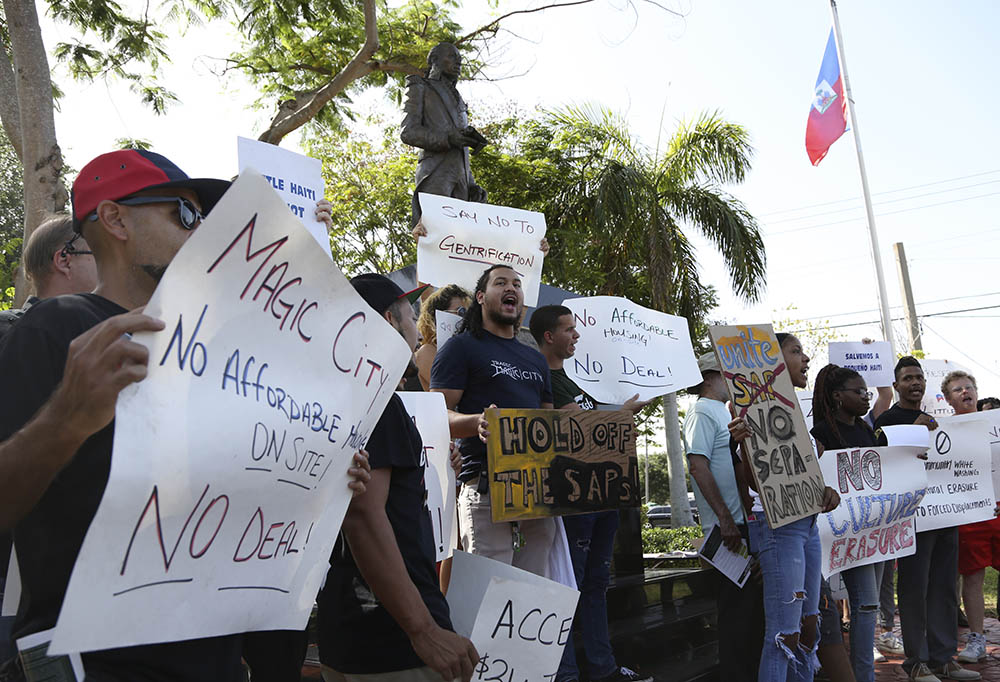 Protesters rally against the proposed Magic City Innovation District on June 20, 2019, in the Little Haiti neighborhood of Miami. There are concerns that the proposed 17-acre mixed use development would exacerbate gentrification and force out longtime residents of the neighborhood. (AP/Lynne Sladky)

Jean-Mary, the pastor at Notre Dame d'Haiti, works with a group of like-minded advocates who have specific demands for developers: more affordable housing and better job opportunities. But applicants must be eligible for many assistance programs. That's where Randy McGrorty comes in.

Notre Dame is the spiritual center of Little Haiti, he told EarthBeat, and the office provides a vital service.

Getting legal status is "the No. 1 need," McGrorty said. "It opens the door to a host of services allowing immigrants to function and participate in our society. I'm proud of our bishop's strong stand on immigration rights."

On May 22, Secretary of Homeland Security Alejandro Mayorkas granted Haitians Temporary Protected Status, allowing them to stay in the US. for 18 months. The neighborhood could see a new influx of immigrants in the wake of the July 7 assassination of Haitian President Jovenel Moïse. 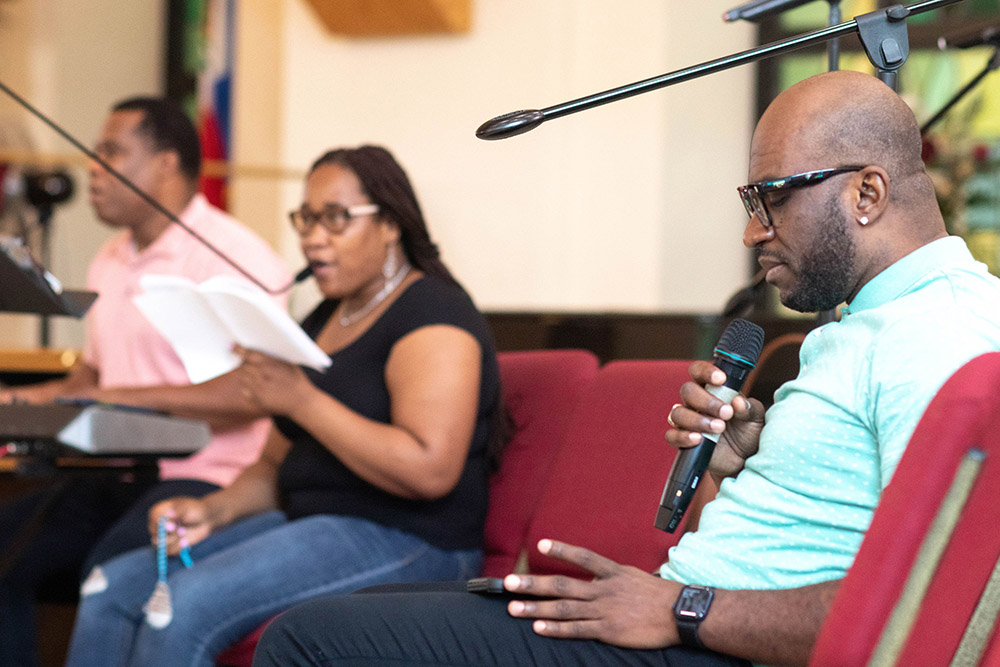 "The new administration is giving Haitians eligibility to work, get driver's licenses, and use pro bono legal services denied under the previous administration's immigration policies," said McGrorty. "An estimated 50,000 Haitians have come here since the 2010 quake, and half to a third settled in South Florida. [Temporary Protected Status] makes a tremendous difference for them."

Little Haiti has long been a magnet for immigrants from the island, with Notre Dame d'Haiti as its spiritual center. But McGrorty, who lives about three blocks from Little Haiti, has noticed changes since he came to the area in the 1990s.

"On Saturday night, you see new people, new art galleries and shops catering to a different clientele — not Haitian," he said.

Jean-Mary said 15 murals have been painted over by new owners, but he is pressing for more opportunities for his community, especially in arts and culture.

"We need to foster communication and find ways to keep our community intact and incorporate the beauty of Haiti," he said. "We need to teach our young people so they can compete for the jobs Magic City will bring, as gentrification continues, and empower small business to create an economic engine. And amid all this development, protect the spiritual life of our community."