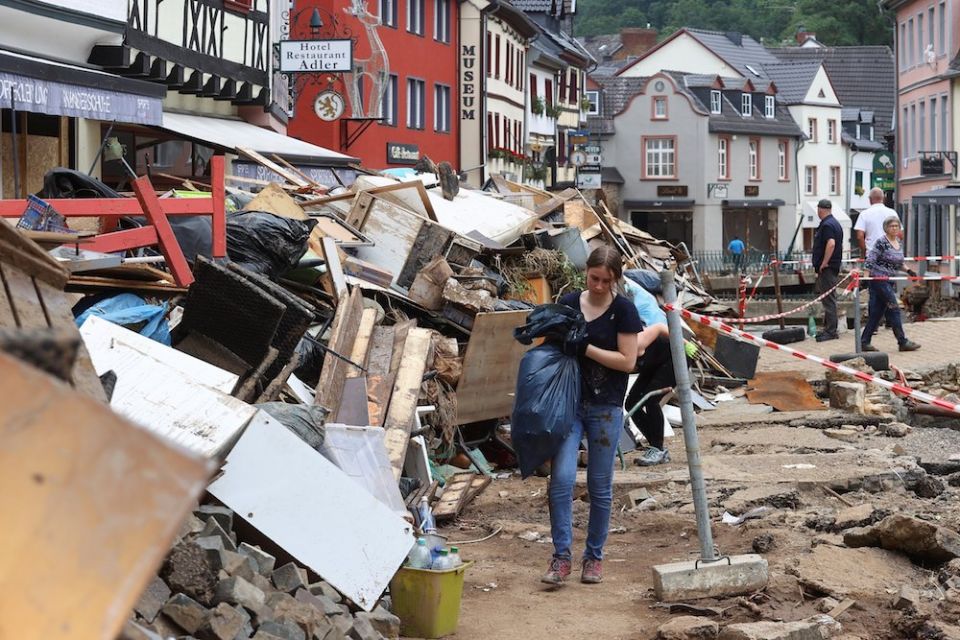 People walk through an area affected by flooding in Bad Münstereifel, Germany, July 19. Nearly 200 people have been confirmed dead, while dozens of others remain missing. (CNS photo/Wolfgang Rattay, Reuters)

BONN, Germany — German Catholic churches offered spiritual and financial support to survivors of devastating flooding in two regions of the country. At Masses July 18, bishops, priests and parishioners prayed for those who died, emergency workers who continued to clear mud-lined streets and residents seeking to salvage what they could from damaged and destroyed homes, the German Catholic news agency KNA reported.

Officials recorded at least 196 deaths July 19 in western and southern Germany, eastern Belgium and parts of the Netherlands. Hundreds more were missing. In a visit to the region July 18, German Chancellor Angela Merkel called the catastrophe the worst natural disaster in the country in 60 years. The German Defense Ministry said on Twitter that about 1,000 soldiers had been sent to 20 towns and rural areas in the three states most affected by the flooding.

Addressing the crowd in St. Peter's Square at the Vatican July 18, Pope Francis reiterated his sympathy for the victims of the flooding in the three countries, asking God to receive those who died, comfort survivors and strengthen rescue workers. 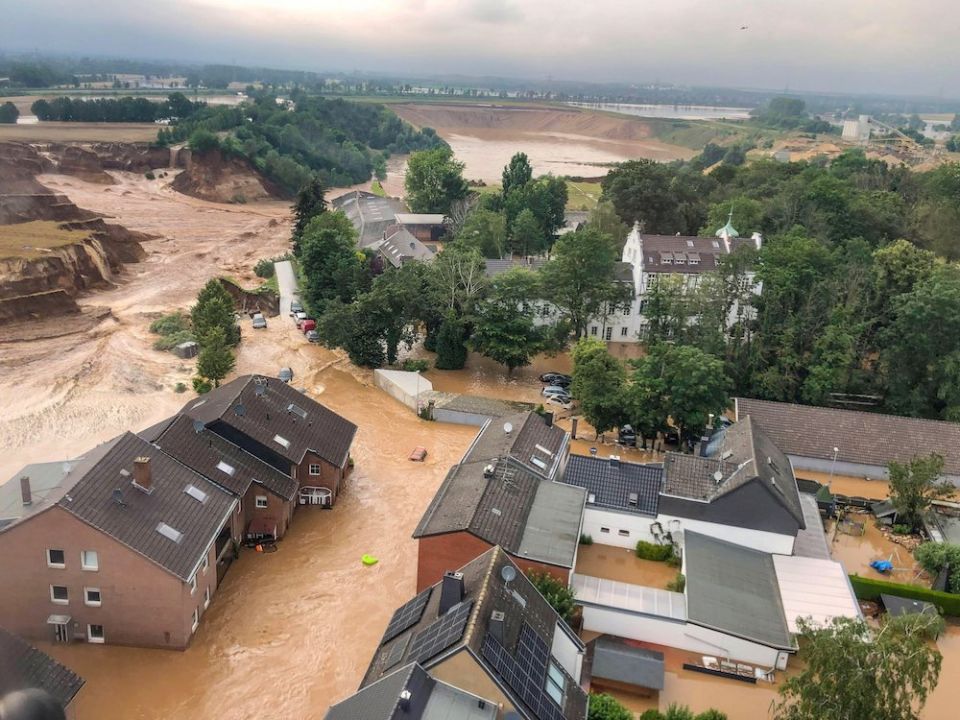 An aerial view shows flooding in Erftstadt-Blessem, Germany, July 16, when record rainfall caused dams to burst and rivers to overflow into towns and streets across western Germany and Belgium, as well as parts of the Netherlands, Switzerland and northern France. (CNS photo/Rhein-Erft-Kreis, Reuters)

"I can't get over the pictures and conversations of the past few days," said Bishop Stephan Ackermann of Trier, who had visited the Ahr Valley, one of the areas of severe flooding.

He described destroyed homes, streets and bridges and told of how speaking with people who felt helpless and "beside themselves." He also expressed support for volunteers who were helping victims.

"My thoughts can't get over those who died in the flooding. We are, and remain, vulnerable, even in the 21st century," he said.

Thorsten Latzel, head of the Evangelical Church in the Rhine River region, reported on visits to cities and towns where the effects of floodwaters were gradually being cleared. The lives of many people were now taking place in the "rubble and garbage on the street," he said.

Cardinal Rainer Maria Woelki of Cologne also expressed shock over the devastation. "Where telephones were still working, I was able to talk with many priests and deacons in the affected regions," he told the Catholic news site domradio.de. The Cologne Archdiocese was providing 100,000 euros (US$118,000), as well as emergency shelter.

Elsewhere, Bishop Helmut Dieser of Aachen addressed the victims in a letter.

"The suffering that has struck many people, the pictures of destruction and death that we now constantly have before our eyes, the speechlessness, the crying, the nonstop news reports about the horrible things that happened to people here and there — all this is upsetting, and it's with close attachment that I feel deep compassion," Dieser wrote.

Before becoming a bishop, he served as a priest in the region around Ahrweiler, a town that was especially hard-hit by the floods.

Meanwhile, the Aachen Diocese has set up a solidarity fund to help children and families.

Cardinal Reinhard Marx of Munich and Freising offered personal assistance, as well as that of the archdiocese, to ease the distress from flooding that reached Upper Bavaria in southern Germany following heavy rains.

Fr. Thomas Frauenlob, a priest in the city of Berchtesgaden, near the border with Austria, told KNA that the cardinal had asked about the situation in the region, expressed his sympathy and thanked all emergency workers. The cardinal was also prepared to travel to the region to provide pastoral support, the priest said.