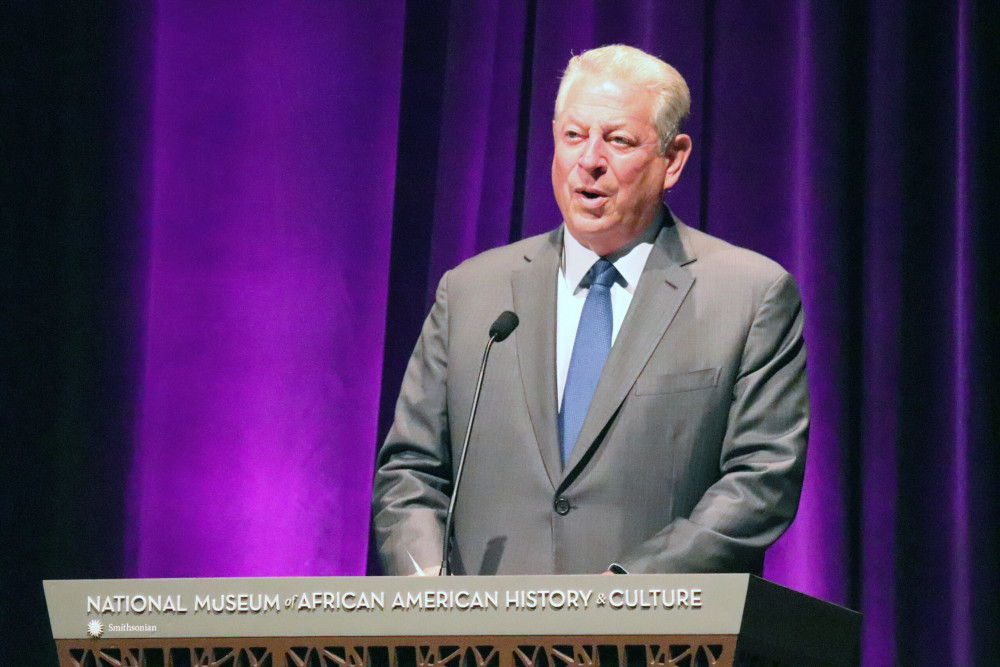 Former Vice President Al Gore speaks during an event co-hosted by the Black Interfaith Project of Interfaith America at the Oprah Winfrey Theater of the Smithsonian’s National Museum of African American History and Culture, May 17, 2022, in Washington. (RNS/Adelle M. Banks)

Speaking Tuesday (May 17) to about 100 representatives of Christian, Muslim, Buddhist and Native American traditions, Gore said faith leaders must continue their work as the effects of global warming are disproportionately harming poor and vulnerable communities, including neighborhoods predominantly occupied by people of color.

"Nineteen of the 20 hottest years ever measured with instruments have been since 2002 and every day watching the international television news feels like a nature hike right through the Book of Revelation," said Gore, who founded the Climate Reality Project to advocate for responses to global warming.

"We must work to build bridges of understanding with those who are suffering the worst impacts," he added at an event co-hosted by the Black Interfaith Project of Interfaith America at the Oprah Winfrey Theater of the Smithsonian's National Museum of African American History and Culture. 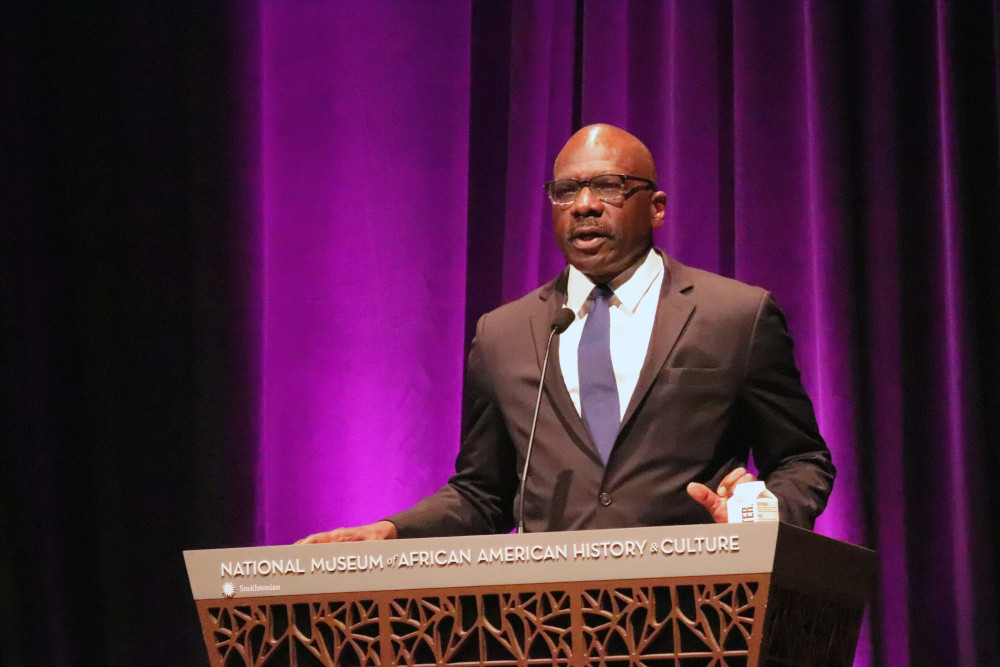 The Rev. Fred Davie speaks at the Smithsonian’s National Museum of African American History and Culture, May 17, 2022, in Washington. (RNS/Adelle M. Banks)

Almost 70% of Black Americans have been found to live within 30 miles of a coal-fired power plant, creating threats to their health, he noted.

Gore and other speakers observed that African American faith leaders have sought to address these environmental and health disparities caused by the climate crisis, which, he said, "at its core is a spiritual crisis."

But Black leaders across faiths need to be more vocal on the issue, said the Rev. Fred Davie, senior adviser for racial equity at Interfaith America, which partners with Religion News Service on a journalism fellowship.

"The Black presence around and in this issue has not been as prominent and as significant as perhaps it could have been and should have been," said Davie, who also is a board member of Gore's project. "We're seeking to change that. And we're particularly seeking to change it not just from one perspective, but from the many faith perspectives that make up the Black community in America." 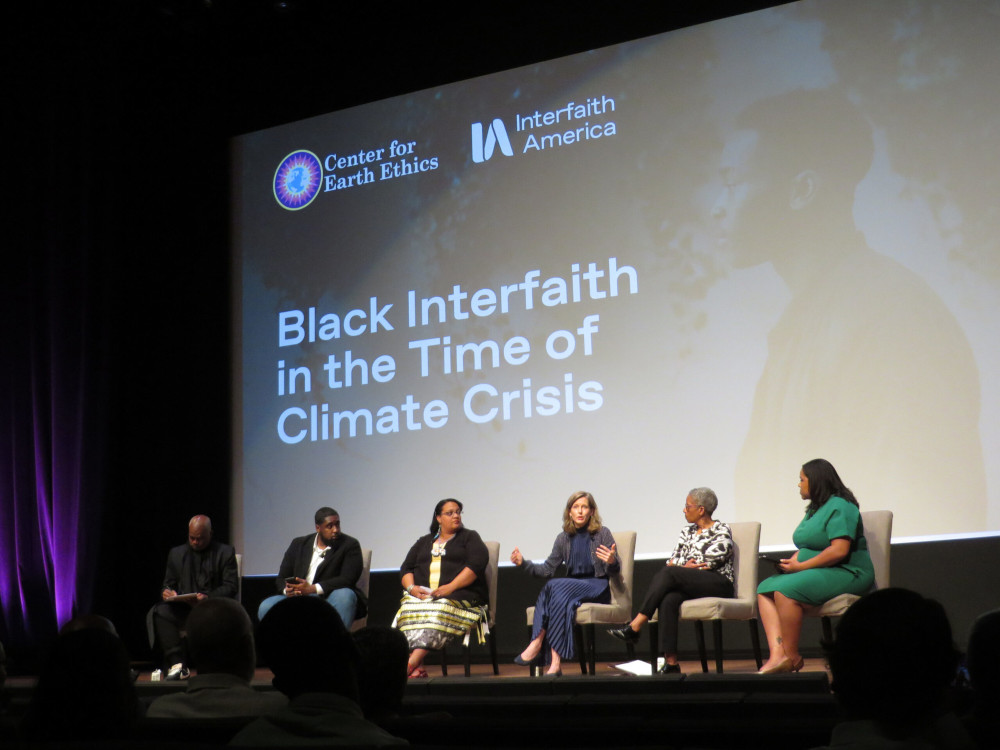 Karenna Gore, center, participates in a panel at the “Black Interfaith in the Time of Climate Crisis” event at the Smithsonian’s National Museum of African American History and Culture, May 17, 2022, in Washington. (RNS/Adelle M. Banks)

Gore, who said his studies decades ago at Vanderbilt Divinity School helped shape his awareness of the "beauty and wonder of all creation," was joined at the event by members of the next generation of leaders who seek to merge concern for ethics and equity with their environmental goals.

Karenna Gore, founder and executive director of Union Theological Seminary's Center for Earth Ethics, the other co-host of the gathering, spoke of the need for faith communities to be "pastoral, prophetic and practical." The vice president's daughter said pastoral care is needed to address those who deny there is a crisis. She also pointed to practical steps such as "greening houses of worship" and joining those already on the front lines seeking to prevent oil and natural gas pipelines that threaten Native American land and Black neighborhoods. 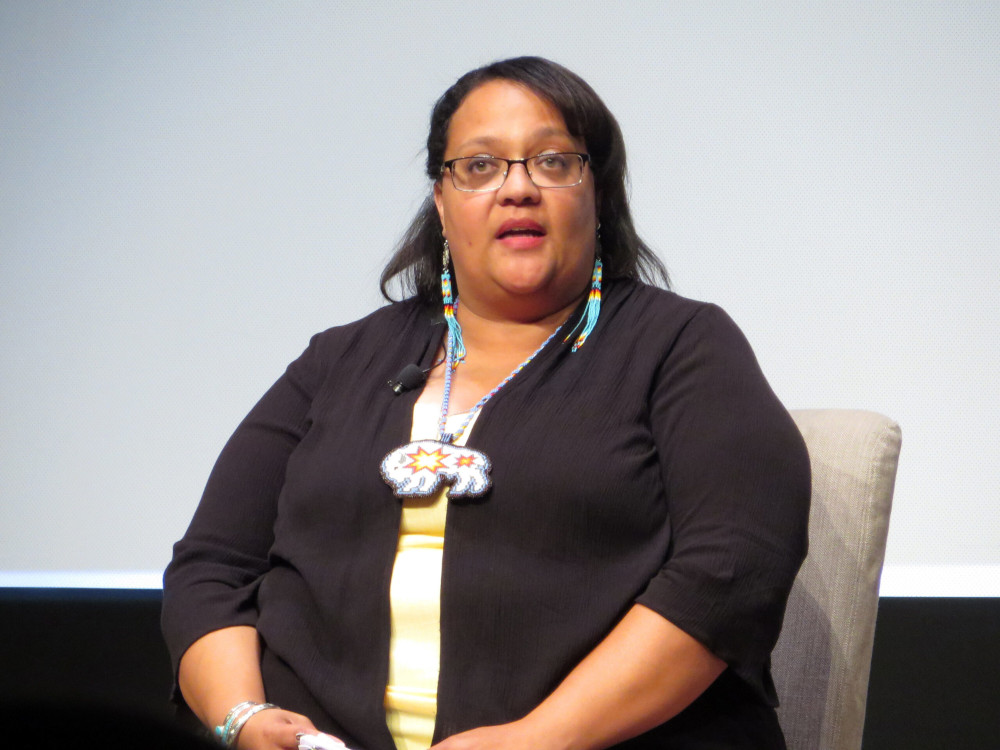 Crystal Cavalier participates in a panel at the Smithsonian’s National Museum of African American History and Culture, May 17, 2022, in Washington. (RNS/Adelle M. Banks)

Crystal Cavalier, co-founder of 7 Directions of Service, described how her Indigenous advocacy group helped lead a campaign to oppose the Mountain Valley natural gas pipeline that the group and its allies believe could be harmful. She said their gatherings started with a time of interfaith prayer that helped build unity among the activists.

"Once people feel comfortable and trust each other," said Cavalier, a North Carolina member of the Occaneechi Band of the Saponi Nation, "it is a lot easier to organize our communities, especially when it comes to around the earth, environmental degradation and how we all have to stand up and fight back."

William J. Barber III, director of climate and environmental justice at Al Gore's project, noted that current interfaith work involving people of color follows earlier efforts by leaders such as the Rev. Benjamin Chavis of the United Churches of Christ, who is credited with coining the phrase "environmental racism." 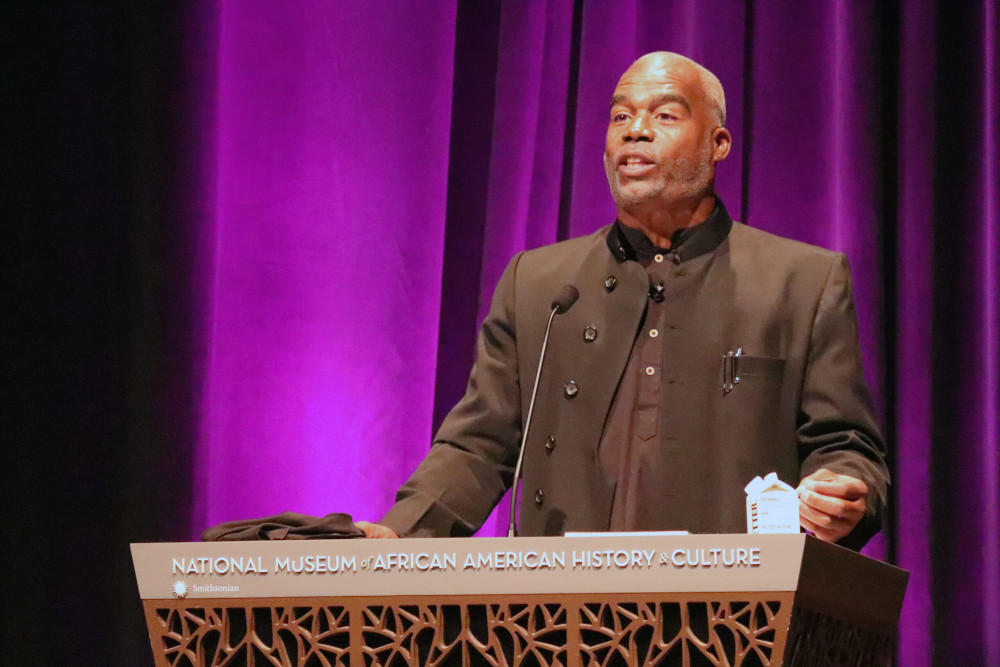 Ibrahim Abdul-Matin speaks at the Smithsonian’s National Museum of African American History and Culture, May 17, 2022, in Washington. (RNS/Adelle M. Banks)

"The presence of the Black faith community in the inaugural stages of the environmental justice movement make us realize that faith traditions have and continue to be some of our greatest bastions of activism," said Barber.

Gore pointed out that when Barber's father, the Rev. William J. Barber II, helped launch a new version of the Rev. Martin Luther King Jr.'s Poor People's Campaign, it included environmental justice as well as the previous focus on the "three evils" of racism, poverty and militarism.

"Why do you think Black and brown people are not as consistent voters?" said the author of "Green Deen: What Islam Teaches About Protecting the Planet." "Because the climate crisis is pushing people out of their homes, forcing people into migration they don't necessarily want to do. It's much easier to vote when you've been voting at the same polling place for the past 30 years."

The former vice president cautioned against following those who have moved from "climate denial to climate despair" and missed the key step in between — taking action to seek clean energy solutions that he said can help solve the climate crisis and environmental racism.

"The transition to a cleaner future can also be a transition to a more just and equitable future," he said. "Instead of building up dirty fossil fuel infrastructure that drags down communities, we can harness sources like the wind and the sun to lift them up."