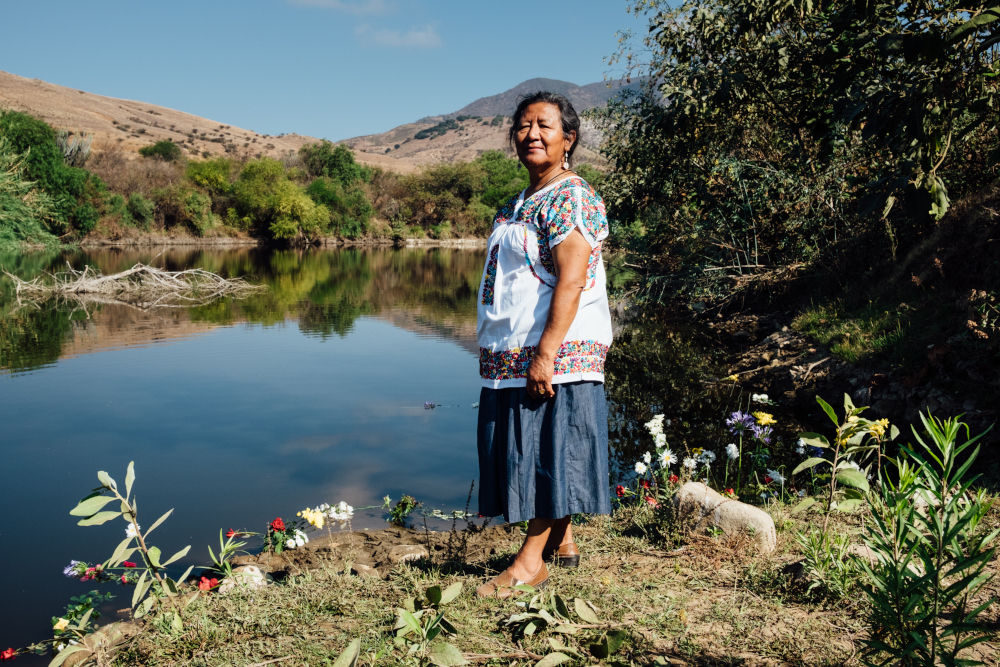 Carmen Santiago Alonso was a Catholic activist and Indigenous rights proponent in Oaxaca, Mexico. She headed the Flor y Canto Center for Indigenous Rights, which she founded in 1995 to fight for local water and land rights. (RNS/Noel Rojo)

"One was her Zapotec origins and a very profound spirituality of her community," the Catholic priest said. "The other was the roots of evangelism."

Santiago Alonso, a lay Catholic missionary who championed the culture of Oaxaca's half a million Indigenous Zapotecs by demanding water rights for their farmers, was both a guardian of ancient rituals and agricultural practices and a model for the Catholic Church's future in this region: local, lay-led and concerned with the most vulnerable.

"Carmen was a manifestation that Indigenous church and the church with a feminine spirit is possible," said Renteria.

Santiago Alonso, who died of cancer at age 69, headed the Flor y Canto Center of Indigenous Rights, which she had founded in 1995 to fight for local farmers’ water and land rights after Oaxaca's Central Valley had been largely taken over by industrial farming and mining companies.

Advocating for the native Oaxacans and for the environment in this mountainous southern Mexican state can not only be unwelcome but dangerous. In 2020, Mexico as a whole was among the top three countries for killings of environmental defenders.

"I know the risks that our lives run," said Santiago Alonso. "That same fear, however, has given me the strength to continue on my way."

Every spring, often on World Water Day (March 22) or Earth Day (April 22), Santiago Alonso would gather government officials and local Indigenous representatives for a sunrise ceremony to thank Mother Earth for her abundance.

"It is important to recover the sacred spiritual connection that we have to Mother Earth as Indigenous people," explained Santiago Alonso.

If her activism drew spiritual strength from Zapotec culture, it relied for its effect on hard negotiation and resolution in the face of outsiders. She stood up to national and multinational mining companies up and down the Central Valley region of Oaxaca.

With Oaxaca struggling with droughts or erratic rains since 2005, Flor y Canto developed a technique to collect rainwater in wells to reverse water scarcity. "Back in 2005," said Esperanza Alonso Contreras, a farmer from San Sebastian, "people in our community stopped growing crops and started emigrating. But now, you can see a lot of fields around our village again. It is thanks to the water capturing projects we have done." 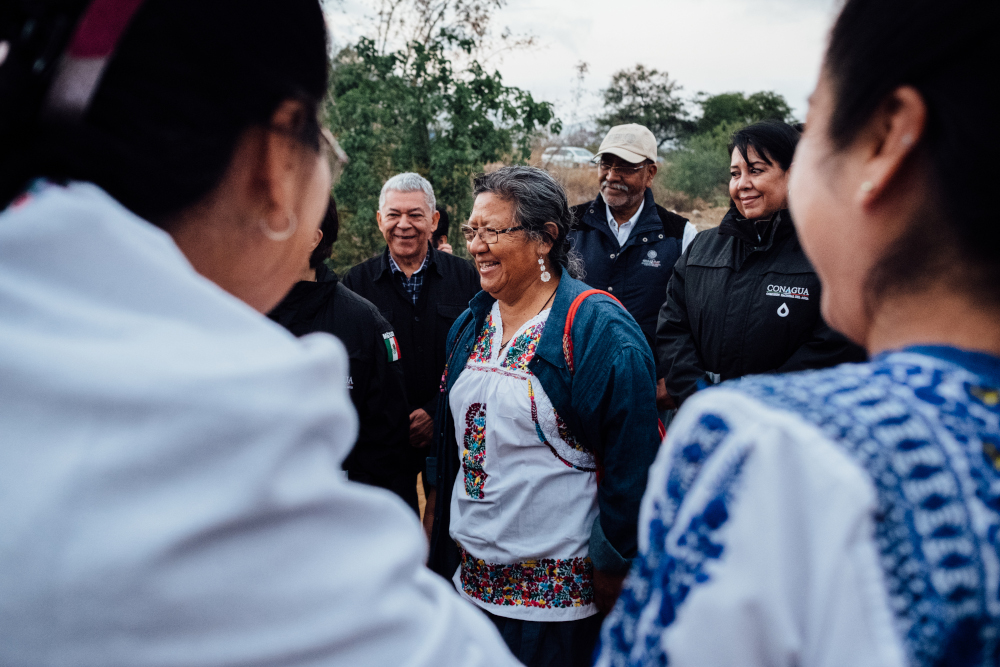 Carmen Santiago Alonso was known regionally for her advocacy for Indigenous voices and water rights amid the natural pressure of droughts and human pressures such as mining. (RNS/Noel Rojo)

"We knocked on doors and told farmers about the technique, we went to the field with them and put it into practice together," said Santiago Alonso.

Her activism was based on a provision of Mexico's Constitution, which recognizes the right of the country's Indigenous peoples to govern themselves communally. In Oaxaca, 417 out of 570 villages and towns elect their own representatives at general assemblies attended by the members of the community. No political parties are allowed in these places.

With Santiago Alonso's help, local bodies like these forged agreements with the Mexican government granting the residents of 16 Indigenous communities the right to administer their own water resources. According to Flor y Canto, these five agreements are the only ones of their kind in the country.

Santiago Alonso learned about Indigenous people's power — and their needs — while working in remote communities as a missionary, bringing her Catholic faith to the Zapotec natives for two decades before founding Flor y Canto, despite her conflicted feelings about imposing the colonial religion on Indigenous people.

But "after studying theology," she said, "I realized that the Catholic theology and the Indigenous one are the same in their essence. They both aim to have respect for a divinity, because this divinity is a creator that created sky, soil, sea and all the things that are mentioned in the Bible and that the Indigenous knowledge mentions, too." 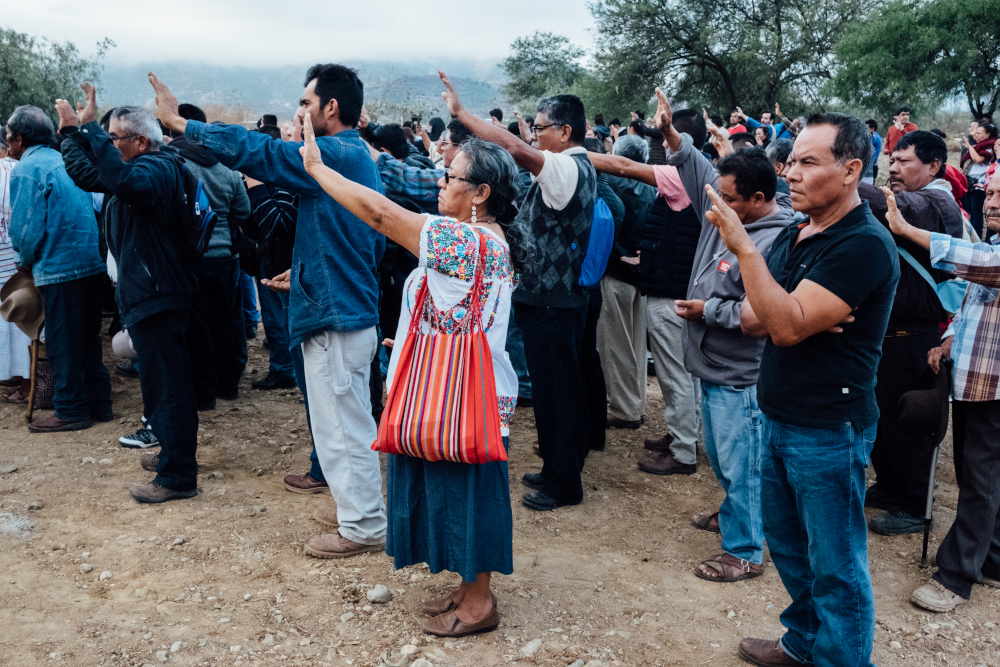 Carmen Santiago Alonso drew on her Zapotec culture as well as the Catholic Church she came to represent. She worked in remote communities as a missionary while advocating for Indigenous rights and the protection of the planet. (RNS/Noel Rojo)

When she was in her 40s, she attended meetings convened by Archbishop Bartolomé Carrasco Briseno, who led the Archdiocese of Oaxaca from the late 1970s into the 1990s. A native Oaxacan and a proponent of liberation theology, Carrasco had long championed the rights of Mexican Indigenous people, and toward the end of his tenure, he began organizing meetings with Indigenous communities across the state.

"He wanted to initiate a process of dialogue with the church because 1992 was approaching that we would celebrate 500 years of the arrival of the Catholic faith and Spanish white men to the Americas," Santiago Alonso explained in an interview last year. "We organized regional meetings of Indigenous people and pastors and developed a methodology that allowed for a dialogue about the lights and shadows that evangelization had brought to America and Mexico."

Advocacy was not easy for Santiago Alonso at first. In traditional Zapotec society, women are often in the kitchen or at the markets selling food. The activist admits she had to learn how to take her place among local leaders and politicians.

"It is important not to come into confrontation with men but instead, solve any of our needs with the knowledge of both genders," she said. "We also need to make our brothers, men, know the capacity and the abilities that God has given women and that distinguish us." 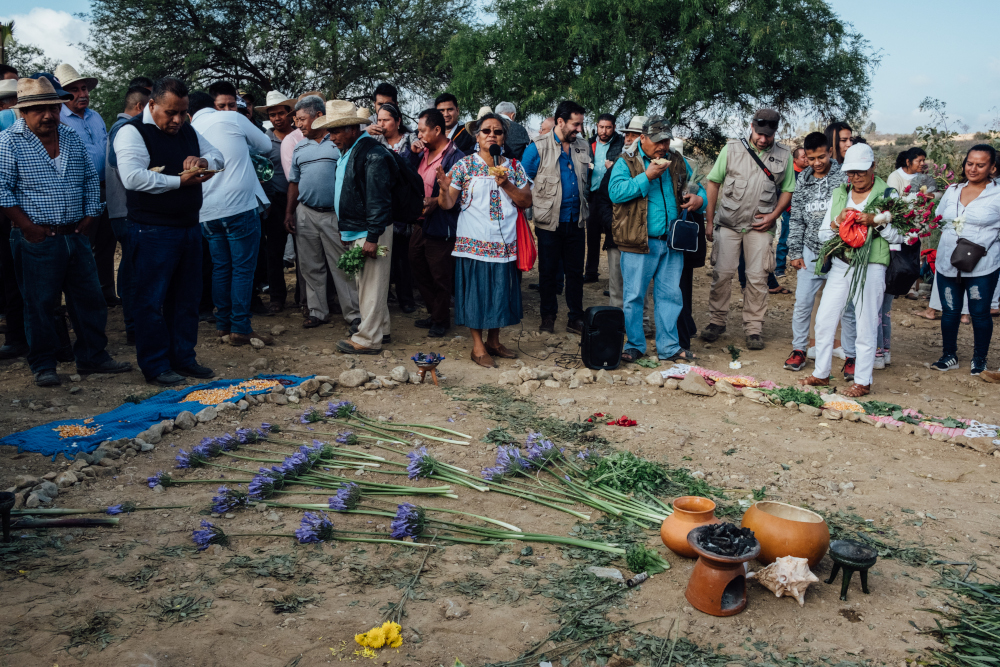 Carmen Santiago Alonso, center, speaks over a loudspeaker during an event celebrating World Water Day in 2019. Alonso often held events to remind people to give thanks to Mother Earth. (RNS/Noel Rojo)

Women, she said, have a particular responsibility for the protection of Mother Earth since they have the experience of being mothers themselves.

Santiago Alonso said that she drew on the model of her grandmothers, who taught her about the value of community. "Both of my grandmothers knew how to prepare food for celebrations, for weddings and other family events."

When she was a child, Santiago Alonso said, her grandmothers would also sit in their gardens full of medicinal plants and vegetables, talking about their commitments to the community.

Though she had no children herself, she talked about her work in terms of the younger generation and securing a future for them rooted in the land. "We must raise our voices and take actions to heal our planet because of boys and girls who have the right to enjoy it," Santiago Alonso said.

This article was produced with the support of the USC Center for Religion and Civic Culture, the John Templeton Foundation and Templeton Religion Trust. Opinions expressed do not necessarily reflect the views of these Organizations.