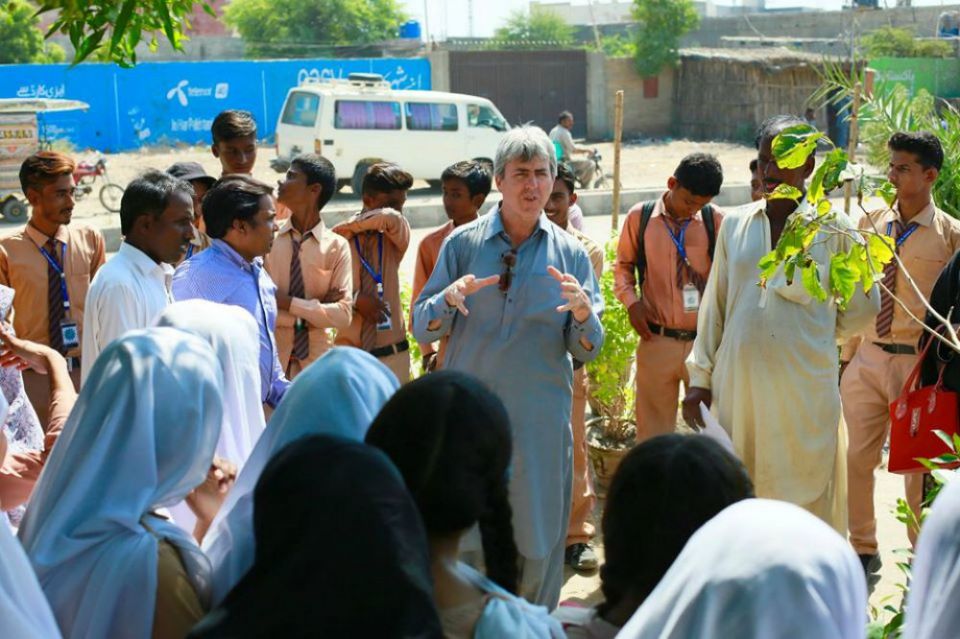 Fr. Liam O'Callaghan is a 53-year-old missionary with an assignment he might never have imagined when he joined the Missionary Society of St. Columban 30 years ago: coordinator of the ecology commission for the Hyderabad Diocese in southern Pakistan.

In 2015, with the support of other Columbans, O'Callaghan helped translate Pope Francis' encyclical on the environment, "Laudato Si', Care for our Common Home," into Urdu and created an abridged version for schools and parishes. Care for the Earth is a message he is trying to get across to people within the Catholic community through seminars in parishes and schools as well as by setting up support groups.

The effects of climate change in some parts of Pakistan are "horrendous," O'Callaghan said in a telephone interview with NCR. "I am convinced that climate change is the biggest issue facing Pakistan today."

Citing data from a 2019 international study on climate risk, he said Pakistan has experienced 145 extreme weather events from 1998 to 2017, leading to the deaths of over 10,000 people. The country is ranked the eighth most affected by climate change in the world.

One of the major effects in Sindh province, where the Irish priest lives, is scorching temperatures. "Month on month, year on year, the temperatures are increasing," he said.

"Last year on 30th April 2018 in the city of Nawabshah, which is about two hours from where I am in the city of Hyderabad, a temperature of 50.2 C [122.4 F] was recorded in April, which is a world record," he said. "Never before on Earth has a temperature above 50 C been recorded in the month of April anywhere." The extreme weather event made headlines around the world.

O'Callaghan lived in the city of Lahore for 15 years before moving in 2016 to Hyderabad, where he initially lived in the parochial house of the Cathedral parish of St. Francis Xavier. For the past two years, he has lived in an apartment that doubles as the Columban office of Justice, Peace and Integrity of Creation in a Muslim area of Hyderabad.

The Columbans are marking 40 years of mission in Pakistan this year. In addition to his work as the coordinator of the Hyderabad's diocesan ecology commission, O'Callaghan also works in interreligious dialogue.

While the heat is debilitating if not deadly, it is not the only impact of climate change that Pakistan is coping with. "Monsoon rains have become much more unpredictable, and the rainfall is much heavier, very often leading to flooding," O'Callaghan said. "Over the past 10 years, there has been some major flooding in Sindh during the monsoon season."

The 2010 floods were the worst in Pakistan's history, leaving almost 2,000 people dead in their wake and over $40 billion worth of damage, according to the government.

Because of flooding and other factors, unsafe drinking water, O'Callaghan said, is a chronic problem. BioMed Research International reports that "anthropogenic activities cause waterborne diseases that constitute about 80% of all diseases and are responsible for 33% of deaths."

A Supreme Court-ordered Inquiry of Commission on the water situation in Sindh in 2017 reported that of the 336 water samples tested across 13 districts of Sindh province, 75% of them were unfit for human consumption.

In addition to poor water quality, Pakistan is predicted to be a severely "water-stressed" country by 2025 and will experience major shortfalls for its population of 207 million.

"On the ground the situation is so bad," O'Callaghan said. "The health of people is very poor. I help out in a parish, and over the last two to three years there has been an increase in young deaths, people dying in their 30s and 40s due to unclean water as well as oppressive lives with poor nutrition. I would say the average age of death among poor people is way below the national average of 57 years. That is shocking. We are trying to raise awareness about the importance of drinking clean water. We are researching different types of water filters, ones that are affordable to the poor." 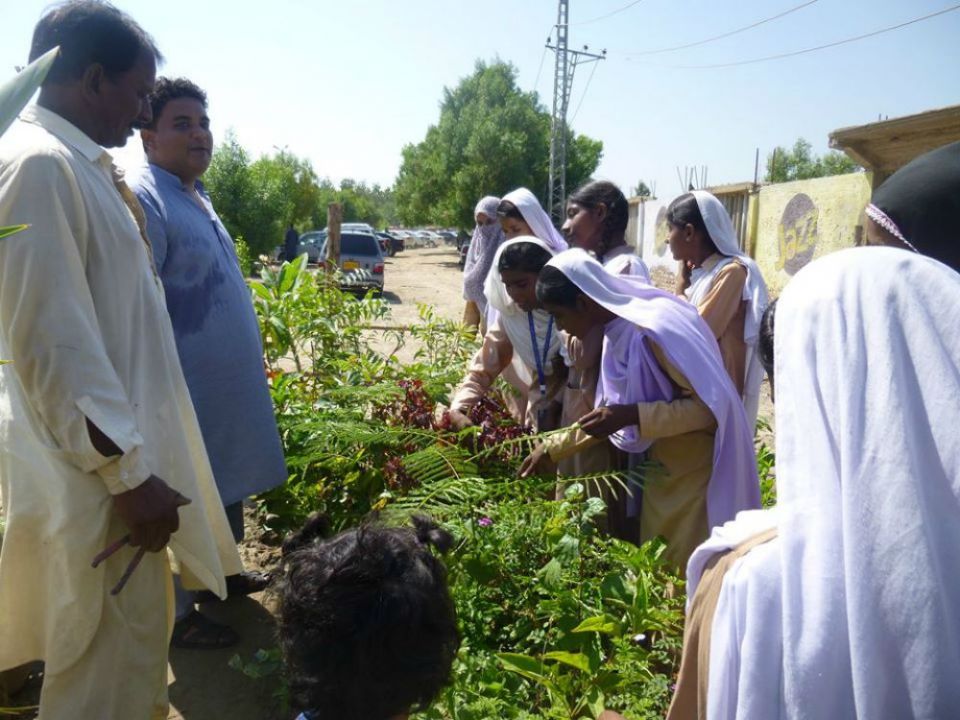 Participants take part in a seminar on trees and plants at St. Paul's High School in Hyderabad, Pakistan. (Danish Yakoob)

He said the lack of forest coverage across the country is exacerbating other problems such as air pollution and flooding: "Pakistan has one of the lowest levels of forest coverage in Asia, totaling just 1.9% of the country, which is next to nothing. Experts say that 20 to 25% of a country's land area should be forested. If there were forests, the flooding wouldn't be as severe."

O'Callaghan welcomed Prime Minister Imran Khan's announcement of a national tree plantation drive to fight the effects of climate change. The plan calls for up to 10 billion trees to be planted across the country over the next five years.

One of the challenges for the missionary is the fact that Christians are such a small minority in Pakistan, totaling just 2.5 million out of a population of 207 million. Half of the Christians are Catholics. Their marginalized position means O'Callaghan has little access or influence with those operating the levers of power or making the laws.

He described his position as ecological coordinator for the diocese as "a new position that the bishop gave me when I came down from Lahore, adding: "I am working at diocesan level within the Christian community. Progress is slow, and the interest is not great — it is a bit of an uphill struggle."

He stressed that it is not just Christians, but the poor in general, who are adversely affected by the climate crisis. As the majority of Christians are poor, they are one of the most affected groups in Pakistan. In the cities, they live mostly in poorer areas with no access to clean drinking water. The increasing heat affects Christians who do much of the manual work, a circumstance compounded by their poor levels of nutrition.

"These factors together have a detrimental effect on health," O'Callaghan said. "In rural areas as drought and salinization take effect, poor people, including Christians, are forced to move to urban areas and often end up living in very poor conditions."

Although he is committed to interreligious dialogue, he said it's a challenge to get Christians and Muslims to work together on tackling the climate crisis. He said many Christians see themselves as persecuted by the majority Muslim population and asserted that many Muslims hold discriminatory attitudes towards Christians.

But Christians are not the only group discriminated against, he said. Hindus, the missionary priest explains, are "equally despised, the lower castes especially," while the Ahmadis are considered non-Muslim and even heretics by the Sunni majority and are the most oppressed group in the country. 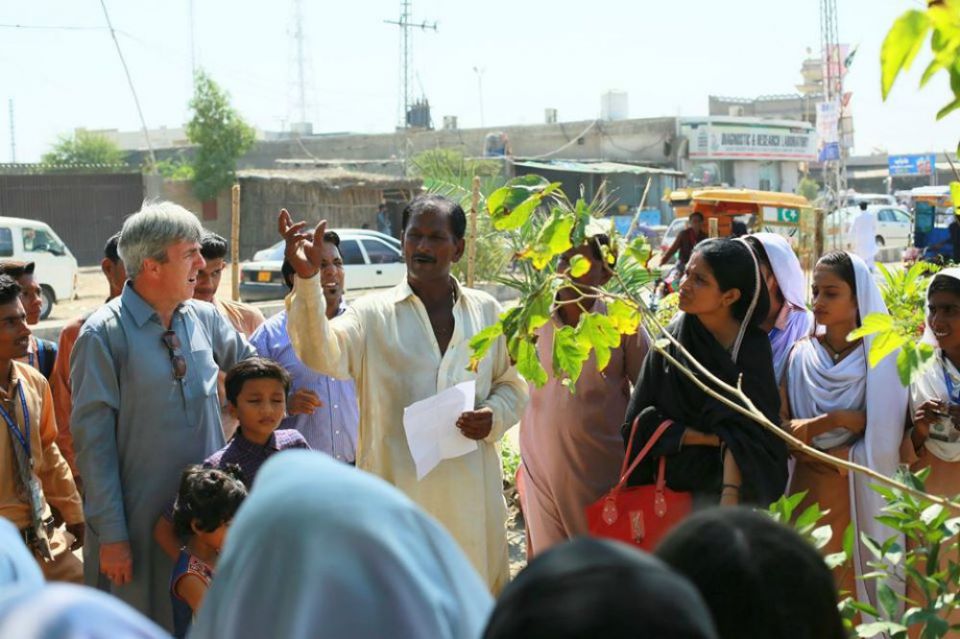 Danish Yakoob, who works with the Columban Fathers, speaks to students at a seminar on climate change. (Pat Visanti)

So far, O'Callaghan said he has not succeeded in collaborating with any Muslim imams on the climate issue. "I am working with some NGOs [non-governmental organizations], and there are Muslim schools that we go to. But it is very hard to find an 'in.' "

"I visit mosques trying to build up relations, but I haven't got on to working on a common plantation yet. Part of the work is trying to meet government officials or local officials to keep pushing them to do something. The big frustration is that I don't have access to the people that we should be targeting — those who can make change happen."

In the context of the overall environmental crisis, he said he regards his efforts as a "drop in the ocean." He said the Columban parish in Badin is active in promoting environmental protection, and in the past year O'Callaghan and his Columban co-worker, Danish Yakoob, have begun to focus on training environmental activists in three schools and two community groups.

"Last year with help from Misean Cara [an organization supporting the development work of Irish missionaries around the world] we focused on small awareness-raising projects in schools and giving seminars to the wider community," he said. "We have been training up two Christian community groups called Mahool Dost or 'Friends of the Earth' in the local language, through workshops and a plantation. It is very much at a local level."

He added: "We journey for a year with students and teachers in each school, and with the community groups. The idea is to work in a more in-depth way with a few people, so that they in turn become agents of change in their families and the wider community, building up awareness and changing habits to protect themselves and their families."