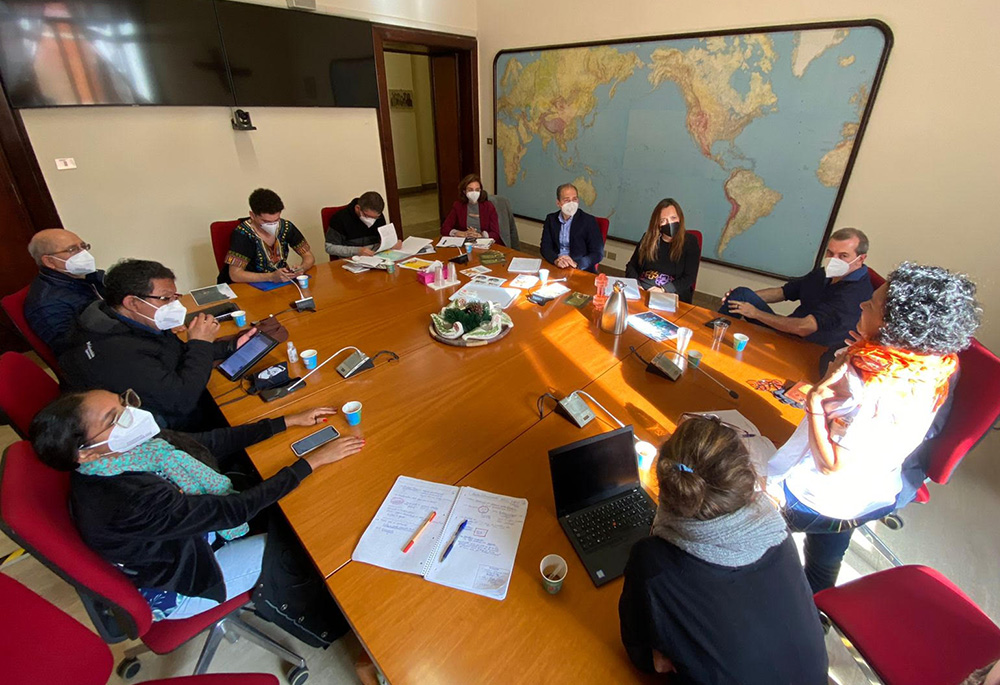 Members of a delegation from Latin America meet with Caritas Internationalis at the Vatican. A caravan of lay and religious leaders traveled to Rome from March 25–29, to garner Vatican support in ending destructive mining practices. (Courtesy of Guilherme Cavalli)

A caravan of lay and religious leaders from Latin America traveled to Rome to garner the Vatican's support in ending the destructive mining practices that ravage communities across the region.

"We want to bring our heritage and our reality to the Vatican," Brazilian Auxiliary Bishop Vicente de Paula Ferreira of Belo Horizonte, told Earthbeat, "to allow us to build projects together that give life to our communities and protect our relationship with the environment."

The 10-member delegation is composed of the Brazilian bishop, a Colombian priest, a Honduran human rights specialist and Catholic environmental activists from Brazil, Ecuador and Colombia representing the Brazilian bishops' conference's Special Commission for Integral Ecology and Mining and nongovernmental organizations Justice on the Tracks, the Churches and Mining Network and Ecuador's Network of Pastoral Ecology.

In Rome, they met with officials from the Dicastery for Promoting Integral Human Development, the Pontifical Commission for Latin America and Caritas Internationalis. Among their principal requests is that the Vatican, along with religious congregations worldwide, take steps to ensure that their money is not funding multinational mining corporations.

"We asked them, 'Where do you put your money?' " Fr. Juan Carlos Osorio Arenas of Colombia told EarthBeat in an interview in St. Peter's Square, "because it is possible that it is in banks that are promoting extractive mining projects in our lands." 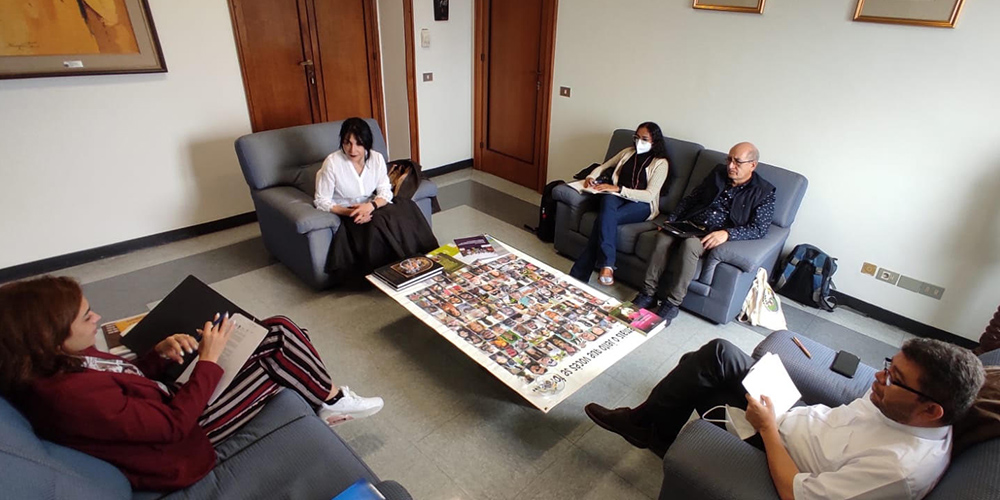 Members of the delegation meet with Emilce Cuda (top left), secretary of the Pontifical Commission for Latin America, at the Vatican. (Courtesy of Guilherme Cavalli)

Before coming to Rome, the delegation traveled through Germany, Belgium and Austria to meet with church and civic leaders, including the president of the Commission of the Bishops' Conferences of the European Union, Cardinal Jean-Claude Hollerich of Luxembourg. They arrived in Germany on March 22 before stopping in Rome from March 25–29. The caravan will end in Spain on April 6.

The stated agenda for their journey is to "influence the European Parliament, banks, and Church organizations on issues such as promoting due diligence, implementing the [U.N.] treaty on businesses and human rights, and financial violence caused by investments in mining that are linked to European and faith organizations," according to a joint press release issued by the Churches and Mining Network and the Divest in Mining Campaign.

Although the Vatican urged Catholics to divest from fossil fuel industries in 2020, Osorio Arenas said the church can still do more politically to put a stop to destructive mining practices.

"With the influence and the political advocacy that these bodies of the Catholic Church here in Rome have, they can lobby for laws that promote due diligence and regulate the supply chain to hold mining companies accountable for the human rights violations they are committing," he said. 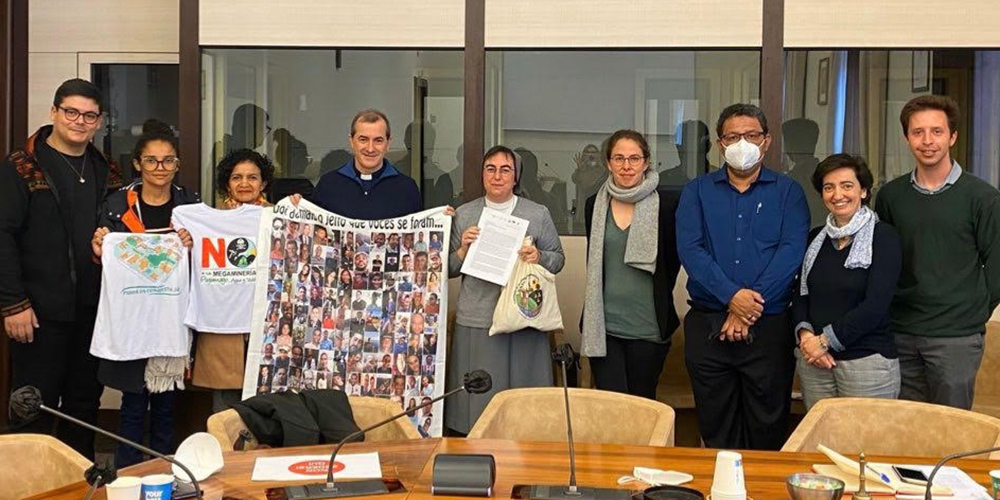 Members of the delegation at the Dicastery for Promoting Integral Human Development, with Sr. Alessandra Smerilli, center, interim secretary of the dicastery (Courtesy of Guilherme Cavalli)

He also stressed that the consequences of industrial mining reach far beyond environmental damage.

"[The mines] create a great social trauma," Osorio Arenas added. "These communities enjoy fraternal relationships with one another, and then these mines come and destroy their entire social fabric. They promise jobs, and this brings competition which destroys communities, or they force people to leave."

De Paula Ferreira said he still feels the stark human impact which the mining industry reaped on his community. His diocese encompasses the town of Brumadinho, where a dam burst at an iron ore mine in 2019, killing at least 272 people. More than 1,000 others were forced to leave their homes. The Brazilian bishop said that by putting integral ecology into practice, disasters and other desperate situations that result in environmentally motivated, forced migration can be avoided.

"We want change," he said. "We see the world and environment changing now, we see refugees due to not only war, but climate, and this idea of integral ecology covers all of that."

His experience of rebuilding the community of Brumadinho, which was flooded with more than 10 million cubic meters of toxic sludge, strikes at the heart of the intertwining environmental and social crises facing Latin America and beyond.

"As Pope Francis said in Laudato Si'," added Osorio Arenas, "the crisis is not only ecological, it is an eco-social crisis. That means that if the planet is in a crisis, it's not only due to the planet, but because human beings are in the midst of a great crisis where they only focus on profit and gain."

That human crisis is precisely what the delegation hopes to emphasize with their trip. Pedro Sánchez Coronel of the Churches and Mining Network Ecuador said these meetings represent the church's need to listen to far-flung communities in order to prioritize their needs on an institutional level. "The pope calls for a church that goes out, out to the people," he said. "Well, we went out, here we are. Now we're waiting for the Vatican to catch up."