by Jason King
Action
This article appears in the Laudato Si' at Five feature series. View the full series. 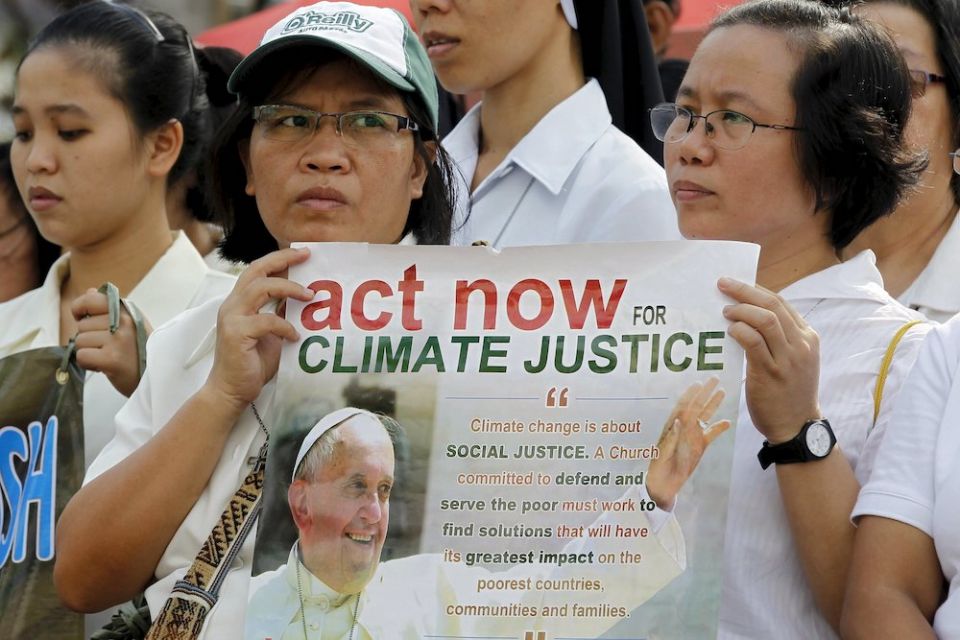 Environmental activists hold up a poster with an image of Pope Francis during a "Climate Solidarity Prayer" march in Manila, Philippines, Nov. 29, 2015, ahead of the U.N. climate change conference, known as the COP21 summit, in Paris. (CNS/Reuters/Czar Dancel)

Last year at Creighton University, more than 200 people gathered for the first of a series of conferences aimed at deeper daily integration of the messages of "Laudato Si', on Care of Our Common Home." The participants arrived in Omaha from many corners of Catholic life, among them parishes, high schools, congregations of religious women, universities and the Vatican.

Dan DiLeo, an assistant professor at Creighton and one of the conference organizers, proposed publishing papers presented at the conference in the Journal of Moral Theology, which I edit. It seemed like a good way to reflect some of the work and scholarship underway as a result of Pope Francis' encyclical.

I hope you read the whole issue. But for starters, I highlight here five themes that emerged from the collection of papers and even now reflect much of what's resulted from Laudato Si' five years after its release.

1. There is still resistance.

While Laudato Si' is celebrated by so many inside and outside the church, there is still resistance to it. In her essay "What is Happening to Our Common Home?," the director of the Nebraska State Climate Office, Martha Shulski, bemoans the fact that, even though climate change is an accepted reality for scientists, it is "a 'debated' political issue." Such a situation means that the work scientists do "studying how much the climate is changing, how it varies regionally, what is causing the change, and how can we improve the models that give us projections" is in danger of being ignored.

Meghan Goodwin, associate director of government relations at the United States Conference of Catholic Bishops, echoes this frustration with government inaction. In  "The Work of the Church and Care for Creation," Goodwin notes that none of the bills she has been advocating for on behalf of the bishops — including ones on ocean acidification, carbon tax, and energy efficiency — have become law. Some have passed the House of Representatives. None have passed the Senate. None would make it past the current president. Goodwin also notes that the Environmental Protection Agency has rolled back mercury and air toxicity standards, a move that the bishops' conference Chairman of Pro-Life Activities, Archbishop Joseph Nauman, found "troubling" for everyone, especially mothers and unborn children.

Instead of policy makers, Erin Lothes Biviano looks at ordinary people. In "Inspiring the Ecological Mission of the American Catholic Church," Biviano, an associate professor at the College of St. Elizabeth, Morristown, New Jersey, identifies "a knowledge gap, a caring gap, and an action gap." She finds that some people don't know about the environmental crisis, some know but don't care, and some who know and care but do not know what to do. As a result, Laudato Si' struggles to be implemented in the daily lives of people.

2. Work is being done in society.

Shulski's essay is not just about political resistance but also about how politics can help. She uses her role as head of Nebraska's climate office to help "farmers and ranchers, natural resource managers, public power utilities, cities, Rotarians, business leaders, the media, state agencies, insurance firms, law offices, youth, retirees, researchers, faith communities" in the state. Her office gathers and analyzes data that helps all of these constituencies make decisions and manage risk associated with climate change in the area.

In contrast to the inaction of the federal government, Goodwin notes how local activists are addressing climate change. With the support of a grant from the Catholic Campaign for Human Development, the United Workers in Baltimore spent five years fighting, and eventually stopping, the construction of one of the largest incinerators in the country near a school in one of the poorest parts of the city.

3. Work is being done in the church.

Creighton University is working to be carbon neutral by 2050. En route this goal, Jesuit Fr. Daniel Hendrickson, Creighton's president, states in his opening remarks to the 2019 conference that the campus has received LEED Silver certification on new buildings and founded interdisciplinary academic programs to study environmental change. (On Feb. 18, Hendrickson announced that Creighton will partially divest its half-billion dollar endowment from fossil fuel companies.) Dominican Sr. Patricia Siemen, an attorney and prioress of the Adrian Dominican Sisters, writes how her motherhouse negotiated with their energy provider to have 100% green sourced energy for the campus and how the Adrian Dominicans as a whole have worked to reduce their energy consumption.

Biviano reports on what is perhaps one of the most impressive intra-church enterprises. The Catholic Energies program from Catholic Climate Covenant identifies, implements and pays for renewable and efficient energy projects for Catholic organizations. They financed the installation of 440 solar panels at Immaculate Conception parish in Hampton, Virginia, at a cost of $350,000 and a reduction in carbon pollution of 230 tons annually. After this project, Catholic Climate Covenant began work, with Catholic Charities in the Archdiocese of Washington, D.C., to place 5,000 solar panels in a field to complement the district's energy grid.

4. Work comes from many corners of the church.

This collection of essays reflects several of those corners: Biviano is an academic. Siemen is a civil attorney and a Dominican sister. Hendrickson is a college administrator and a Jesuit. Martha Shulski works for the state government, and Meghan Goodwin lobbies the federal government. 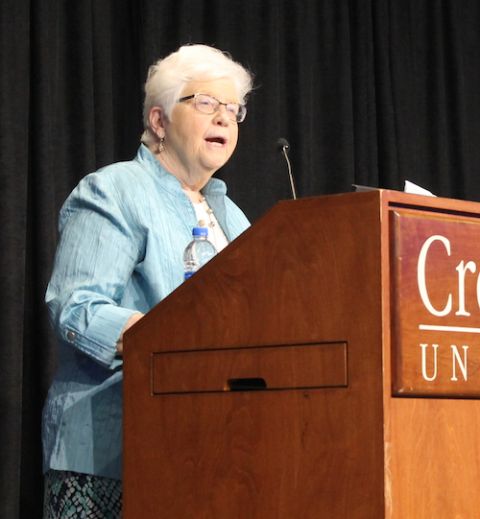 The hierarchy is also represented. Omaha Archbishop George Lucas, lent his support to the conference and the work of Catholic Climate Covenant. San Diego Bishop Robert McElroy made an "Urgent Summons" to "the American People at This Moment in our History."

Even those from the left and the right — those sad divisions that afflict the U. S. Catholic church — are involved. Biviano, drawing on the work of CatholicEcology.net blogger William Patenaude, discusses the contributions each side can make, including attitudes of tolerance and inclusion, discussing what is right and just, and how to organize and act.

5. Environmental care is part of the Gospel.

The authors see concern for the environment as part of the Gospel, echoing Pope Francis' claim that concern for creation is not "a secondary aspect" of the faith. Lucas thanks the organizers of the conference because a better integration of environmental concern into people's lives will help "people to mercifully and lovingly live the three relationships that 'ground ... human life': 'with God, with our neighbour and with the earth itself' (Laudato Si', no. 66)." Hendrickson notes that Laudato Si' is bound up with "the Church's commitments to protect human life and dignity, exercise a preferential option for the poor and vulnerable, and promote the common good."

Kenneth Himes, professor of theology at Boston College and a leading scholar on Catholic social teaching, makes the connection between faith and environmental care most forcefully. Himes notes that, in the early years of Christianity, believers addressed a widespread epidemic in the Roman empire by helping anyone they could, believers and non-believers alike with a system of assistance. This broader concern for society, this love of the far away neighbor that is called justice, was at the very origins of Christianity. So, today, with climate change, Christians are once again to "love their neighbor" as they care for creation.

[Jason King is a professor of theology at St. Vincent College in Latrobe, Pennsylvania, and editor of the Journal of Moral Theology.]

Commentary | Laudato Si' five years out: five themes from a scholarly review of its impact