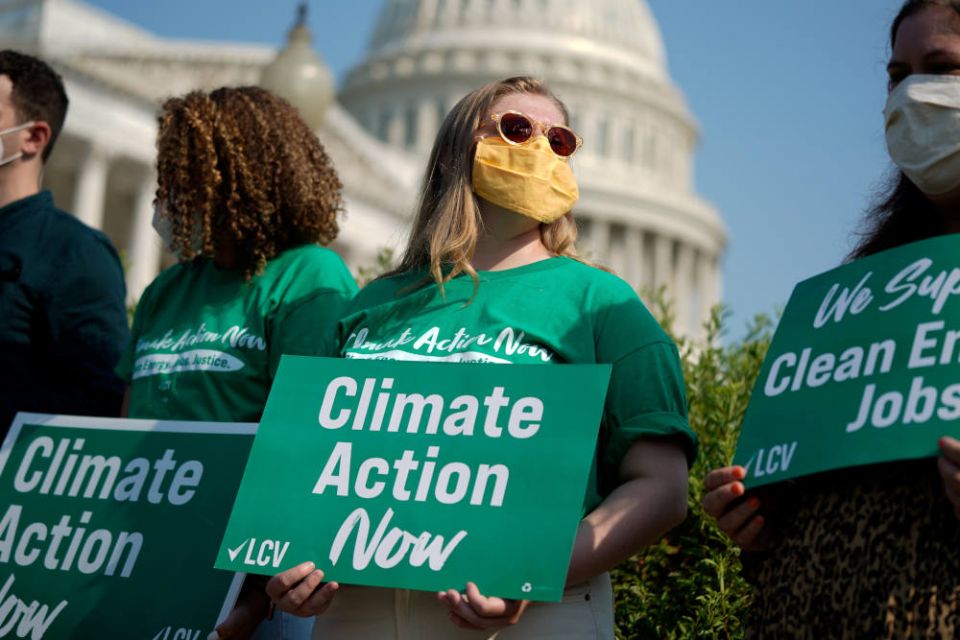 It was after reading Pope Francis' encyclical, "Laudato Si', on Care for Our Common Home," that Emily Burke began wondering what she, as a student at Jesuit-run Creighton University, could do to help protect the environment.

"I was really energized," Burke recalled after reading the teaching document. "That message informed my time at Creighton."

She became involved in a student-led campaign to convince university trustees to divest school resources from fossil fuel companies. The work, rooted in church teaching, led school officials to announce Dec. 31, 2020, that full divestment would occur within a decade.

Burke and other students had something to celebrate and realized their generation could make a difference.

After graduating from Creighton in May, Burke, 22, is ready to turn the pope's teaching into a career as she begins doctoral studies this fall in community and environmental sociology at the University of Wisconsin-Madison. 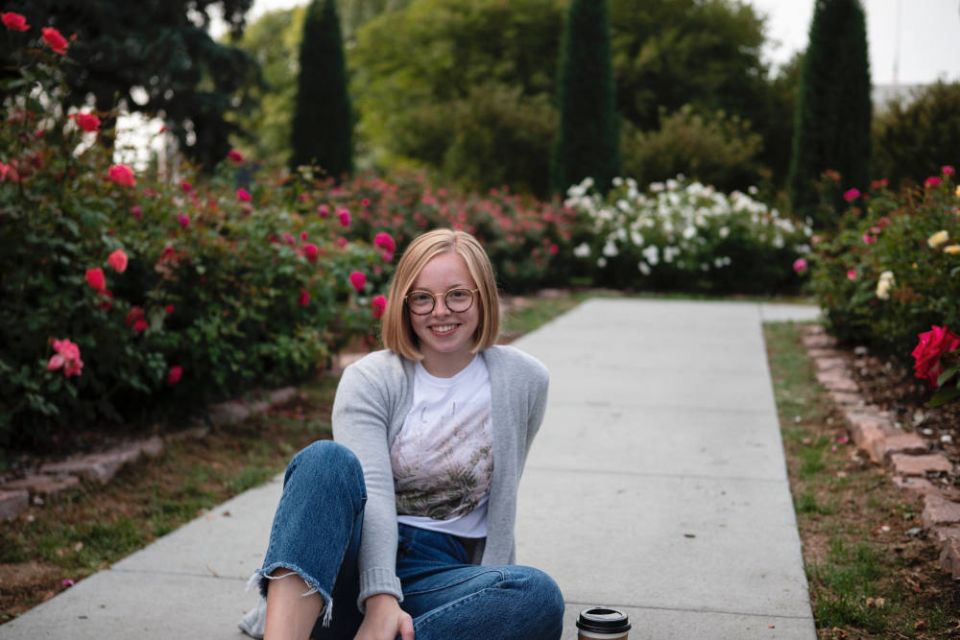 Emily Burke, seen in an October 2020 photo, has been inspired by Pope Francis' encyclical on the environment in efforts to address climate change and global warming. (CNS photo/courtesy Emily Burke)

She is among a growing cadre of young adults who have been inspired by Pope Francis' calls to understand the integral connection between people and the Earth, care for creation and the harmful effects of climate change on all life.

Burke's role in the divestment movement led to an invitation to be a leader of the young adult track during the Catholic Climate Covenant's second biennial "Laudato Si' and the U.S. Catholic Church" conference in July. The conference saw more than 2,700 participants join a series of online programs to learn more about how to bring the encyclical's teaching on climate change into the U.S. church.

"It's excited a lot of people who were at the conference to realize that there's a mass of young people who are trying to move the needle on climate within the Catholic context," Burke said of the three-day online conference.

The interest and energy expressed by young adults is understandable, said Dan Misleh, executive director of the Catholic Climate Covenant. "Young people are concerned about the future," he told Catholic News Service.

The Catholic climate group is looking to tap that energy by encouraging young people to "challenge their own parish and diocesan leaders to listen to them and their concerns and to take creation care as seriously as the science demands," Misleh said.

He also expressed hope that the work on environmental concerns can be an evangelizing tool directed at young adults by helping them understand they can "fix their future with their faith."

Annapatrice Johnson, 32, team leader for young adult empowerment for Maryknoll Fathers and Brothers, coordinated the young adult track for the conference from her base in Seattle. She said young people have a "feeling of angst of the impending doom" and want to be involved in protecting the Earth for future generations.

Sessions during the conference were designed to give participants skills in organizing, tools for action and ways to determine where they can impact the church's members to make creation care a priority, Johnson explained.

Participants came to realize they were not alone in their concerns and that they have the ability to influence parish and diocesan leaders when it comes to climate advocacy that is rooted in Catholic social teaching and backed by the pope's own words.

"What can the church do?" she asked. "Start changing the narrative. There's a lot of language that talks about us caring for creation, but we separate from it. We have to realize we are integrally connected. We're not different. We need to see ourselves as part of creation rather than apart from creation." 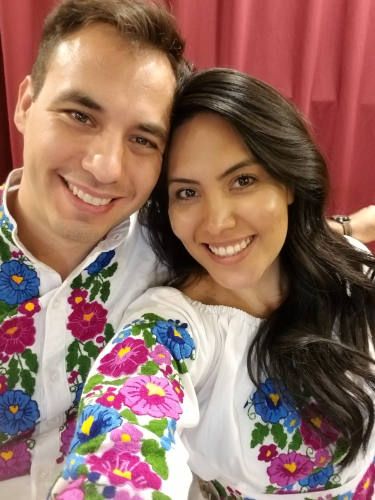 Brenda and Rudy Noriega-Flores are seen on their wedding day, July 24, 2021. In line with their values to live a simple lifestyle and care for creation, the Catholic couple decided to forego an expensive celebration, choosing instead traditional cotton clothing reflecting their Mexican heritage, simple wedding bands made of recycled gold, and a small restaurant reception. (CNS photo/courtesy Brenda and Rudy Noriega-Flores)

It's the words of Pope Francis that have influenced the work of Brenda Noriega-Flores in different venues from the diocesan level to individual lifestyle choices.

At World Youth Day 2019 in Panama, Noriega-Flores, led a contingent from the Diocese of San Bernardino, California, where she was young adult ministry coordinator. She was invited with other young adults to attend a lunch with the pope where they discussed various issues, including climate change. She was struck by the pope's concern that the window to act to prevent climate catastrophe was limited.

"I realized there's no time to waste," she said. "He made me reflect about how I was living my own life."

In her ministries since, most recently working alongside Johnson with Maryknoll, Noriega-Flores has made Laudato Si' the primary focus of her work. She said she has shared its message with other young adults, including Latino farmworkers in California.

"For me, it implores me to live it myself and teach others," Noriega-Flores said.

Personally, that meant planning for her wedding July 24, 2021, at Our Lady of Victory Church in Fresno, California, to be a simple celebration: traditional cotton clothing reflecting her and her husband's Mexican heritage, simple wedding bands made of recycled gold, and a reception at a restaurant with only the closest family and friends present.

"Some would ask, 'Isn't this too much?' I said, 'No, we want to live the Franciscan life,'" she explained. "This is the sacrament of marriage and let's get it out of the marketing."

Another conference participant, Colby Cox, 24, joined sessions from Germany, where he serves as a second lieutenant in the U.S. Army. He said he was glad to know that other young people share his concerns about a warming planet.

Cox grew up as a member of the Southern Baptist convention and became Catholic in college. While going through the Rite of Christian Initiation of Adults a deacon told him about the Catholic Climate Covenant's work on the environment and he has been exploring church teaching on the topic ever since.

His interest lies in the science of climate change. Cox told CNS he wants to use his interest in science to verify for himself the effects of global warming. "When you see (the effects) in every sphere of what you study," he said, "you ask, 'What's the root cause?'"

The consequences of climate change are readily apparent to Teresa Tsosie, director of religious education at St. Jude Parish in Tuba City, Arizona, where she serves the Navajo people. Her work around climate issues got the attention of Johnson, who invited her to join the conference as a track leader.

The farms and grazing land of the Navajo are experiencing prolonged drought, something that Tsosie, 34, said she does not recall from her childhood. She tells how her grandmother was a sheep herder, but that these days it is difficult for the Navajo people to keep animals. She cited a recent memo from Navajo leaders that called for ranchers to reduce the size of their herds because of a water shortage.

Such realities have spearheaded Tsosie to lead an effort to reduce waste at St. Jude by ending the use of single-use cups and containers. She also has made connections among Native Americans between traditional teaching on the necessity to respect Earth and the papal encyclical similar call.

"As a Native American, you're always taught from when you're small you have to take care of Mother Earth and she takes care of you, she returns it to you," Tsosie said.

As a Native American, she told CNS she also is motivated to act to protect the planet for her 11-year-old nephew. She's concerned because it has become rare for him to see snow, or even much rain, during northern Arizona winters.

"I wonder what the world will be like for him," she said. "We're trying to save the planet for the younger generation."