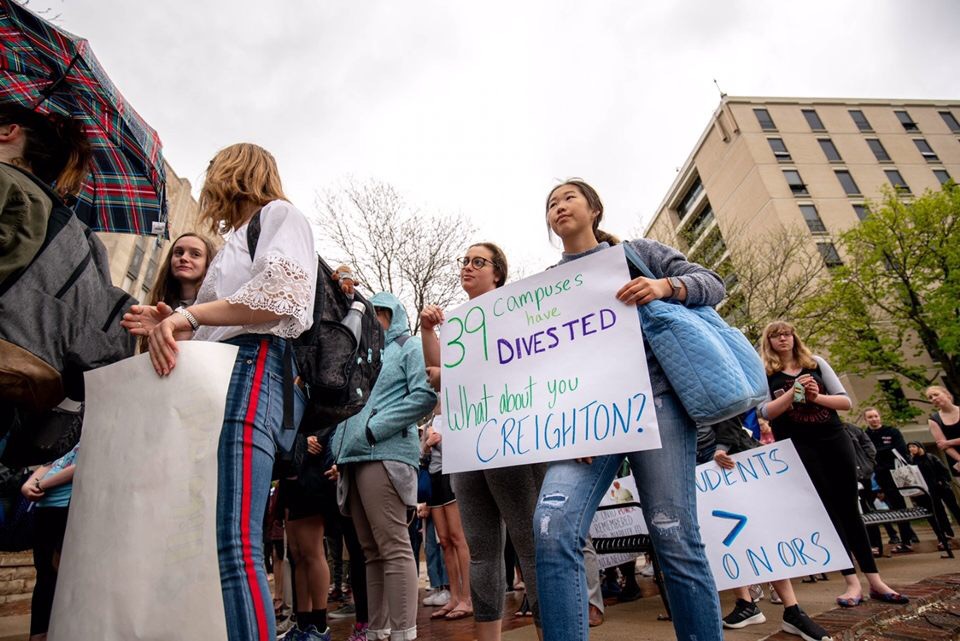 A student carries a sign urging Creighton University to divest its endowment from fossil fuels during an April 2019 demonstration of several hundred students on the Jesuit campus in Omaha, Nebraska. (Emily Burke)

Updated at 3:30 p.m. central: Jesuit Fr. Daniel Hendrickson announced in a statement Nov. 13 that Creighton University will not divest from fossil fuels "at this time," stating to do so "does not align with our goal of a properly diversified endowment" and could negatively impact the school and its students.

Read the full story on the Creighton president's decision.

Students at Creighton University are awaiting a decision from the school's president after the campus last week voted overwhelmingly to recommend it divest its endowment from fossil fuels.

The Jesuit-run university in Omaha, Nebraska, is the latest U.S. Catholic campus to face a debate on divestment, driven by moral concerns with fossil fuels' impact on the planet and climate change. The students' recommendation follows recent messages from Pope Francis and the Amazon synod calling for a "radical energy transition" to avert catastrophic scenarios of a rapidly warming planet.

Faith groups have played a major role in the eight-year divestment movement, but divestment efforts at Catholic colleges have met with mixed results.

On Nov. 5, Creighton students passed a non-binding referendum with roughly 86% support that recommended the school begin the process of divesting its endowment, estimated by students at $568 million, from coal, oil and natural gas companies.

The referendum asks Creighton to immediately freeze any new investments in fossil fuel companies, and to divest from the top-200 highest emitting fossil fuel companies by 2025, with such holdings approximately 2% of the endowment, according to students. The students ask the university to divest completely by the time Creighton reaches its set goal of carbon neutrality by midcentury. Students estimate 10% of the endowment, more than $60 million, is currently invested in fossil fuels.

Jesuit Fr. Daniel Hendrickson, Creighton president, said Nov. 6 that he would respond to the referendum within a week.

"I appreciate and commend our students for their concern, commitment, and passion in seeking solutions to the serious environmental challenges we, as a global community, face today," Hendrickson said in an email to the university about the referendum.

Emily Burke, a junior at Creighton majoring in sociology, told NCR that fossil fuel divestment is in line with the school's Catholic and Jesuit identity to work for peace, justice and the betterment of society, including caring for creation.

"We're not asking to do anything antithetical to Creighton's mission … We're really just trying to do what Creighton has taught us to do," Burke said. 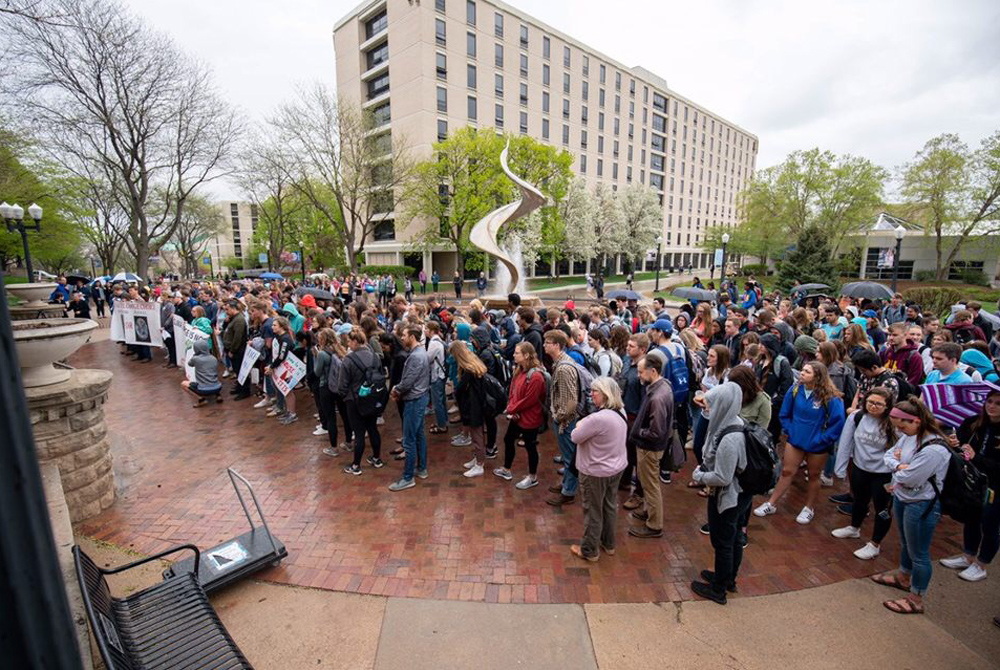 Hundreds of students at Creighton University hold a demonstration in April urging the Catholic school in Omaha, Nebraska to do more to address climate change, including divest from fossil fuels. (Emily Burke)

Students at Creighton have been pushing for fossil fuel divestment for more than a year. Last April, more than 200 students held a demonstration asking the university to divest, as well as move up its carbon-neutrality target date and standardize education on climate change throughout the curriculum.

After the demonstration, the administration responded, saying that, while committed to sustainability through academics and such campus initiatives — this fall, it formed a committee to review the carbon neutrality date — it would not divest from fossil fuels. It cited the growth of a "robust endowment" as critical for the university's long-term fiscal health and vitality, including funding scholarships, student aid and faculty support.

In a video promoting the referendum, more than 30 students and one Jesuit — Fr. John Shea, an assistant professor of biology — made the case for why Creighton should cut financial ties with fossil fuels, calling such investments both unethical and a financial risk for the university long term.

The release of greenhouse gases from burning fossil fuels is a major driver of global climate change, the students noted, which disproportionately impacts poor and vulnerable communities through increased poverty, hunger and more extreme weather events. They argued that increased government regulations — along with scientific reports documenting the need to keep the bulk of coal, oil and gas reserves in the ground to limit global warming below dangerous levels — make fossil fuels a volatile investment.

In addition to cutting ties with fossil fuel companies, students called for the university to reinvest in economically, socially and environmentally responsible alternatives.

"Creighton must divest to ensure that our education is funded by the fruits of just investments, not by profits inseparably tied to the suffering of all people impacted by the climate crisis," Angie Ngo, a Creighton business student, said in the video.

The video also references the pope's message in September for the World Day of Prayer for the Care of Creation. "Now is the time to abandon our dependence on fossil fuels and move, quickly and decisively, towards forms of clean energy and a sustainable and circular economy," Francis said. The pope has repeated the call for a "radical energy transition" directly to executives of the world's top energy companies in meetings at the Vatican organized the past two years by the University of Notre Dame.

Students in the video also refer to the socially responsible investing guidelines from the U.S. Conference of Catholic Bishops. That policy does not address divestment, but recommends shareholder resolutions that encourage clean energy, energy conservation and the reduction of greenhouse gas emissions.

At the recently concluded synod for the Amazon, bishops in their final document recommended that the Catholic Church in the Amazon region divest itself and support divestment campaigns from companies engaged in socio-ecological damage, and echoed the pope's call "for a radical energy transition and the search for alternatives."

In 2015, students at Jesuit-run Georgetown University successfully pressed the university to divest its $1.5 billion endowment from coal companies. At Boston College, the administration has resisted years of student-led efforts, including several student-passed divestment resolutions, the latest in February. The administration has called divestment "not a viable solution," preferring to focus on lowering carbon footprints.

The Marianist-led University of Dayton in 2014 became the first U.S. Catholic college to publicly declare it would divest its $670 million endowment from fossil fuels. The decision there was not initiated by students but an investment committee.

Likewise, the board of trustees at Jesuit-run Seattle University voted in September 2018 to fully remove fossil fuels from its $230 million endowment within five years after consultation with an advisory group on socially responsible investing. In a press release, president Jesuit Fr. Stephen Sundborg cited the "special obligation" as a Jesuit and Catholic university for the school "to address the unfolding climate change crisis" in light of Francis' encyclical "Laudato Si', on Care for Our Common Home." 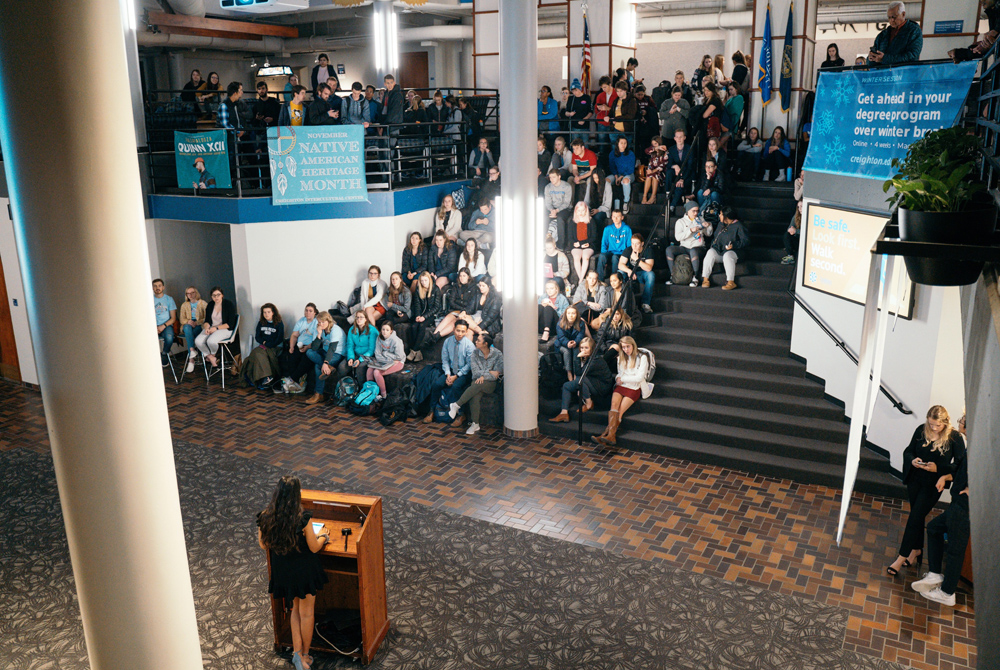 Students at Creighton University gather in the Skutt Student Center as they await results of a referendum vote requesting the Jesuit school to divest its endowment from fossil fuels. The non-binding referendum was passed with nearly 86% of the vote. (Emily Burke)

The referendum is relatively new at Creighton, with the students union voting in 2018 to add the tool to its constitution and bylaws. According to the university, two referendums passed last year — one to remove plastic bags from campus and another to phase out plastic straws from its food service. In both cases, they supported work already under way through its Office of Sustainability Programs and Housing and Auxiliary Services.

In 2010, Creighton set its 2050 carbon neutrality goal. It has since reduced emissions from electricity use by 25%, installed solar and wind systems on campus and established the sustainability office and an interdisciplinary sustainability studies program. The school has also signed onto the Catholic Climate Declaration pledging efforts to meet the U.S. emissions reduction goal under the Paris agreement.

As part of its strategic plan leading up to Creighton's sesquicentennial anniversary in 2028, the university has stated it wants to become "a major contributor" to the wider Catholic Church in the formulation of teaching around new societal issues, including ecological justice.

"In a sense, we at Creighton University have committed ourselves to help the Catholic Church discern adequate responses to contemporary challenges like ecological degradation and climate change," Hendrickson said in a speech in June to open the "Laudato Si' and the U.S. Catholic Church" conference focused on more widely integrating Francis' encyclical on the environment. The campus is set to host two more iterations of the conference, co-organized with Catholic Climate Covenant, in 2021 and 2023.

In February, the Society of Jesus established "caring for our common home" as one of the Jesuit order's four universal apostolic preferences for the coming decade. In particular, it directed its higher learning institutions "to identify areas where they can make a difference and contribute to a change of mind and heart."

Jesuit provinces in Australia, Italy, and English-speaking Canada have all announced their intentions to divest from fossil fuels, according to a list compiled by the Global Catholic Climate Movement. Approximately 150 Catholic organizations have divested from fossil fuels. Overall, religious institutions represent the largest percentage (27%) of the 1,100 groups who have committed to divesting a cumulative $11 trillion from fossil fuels.