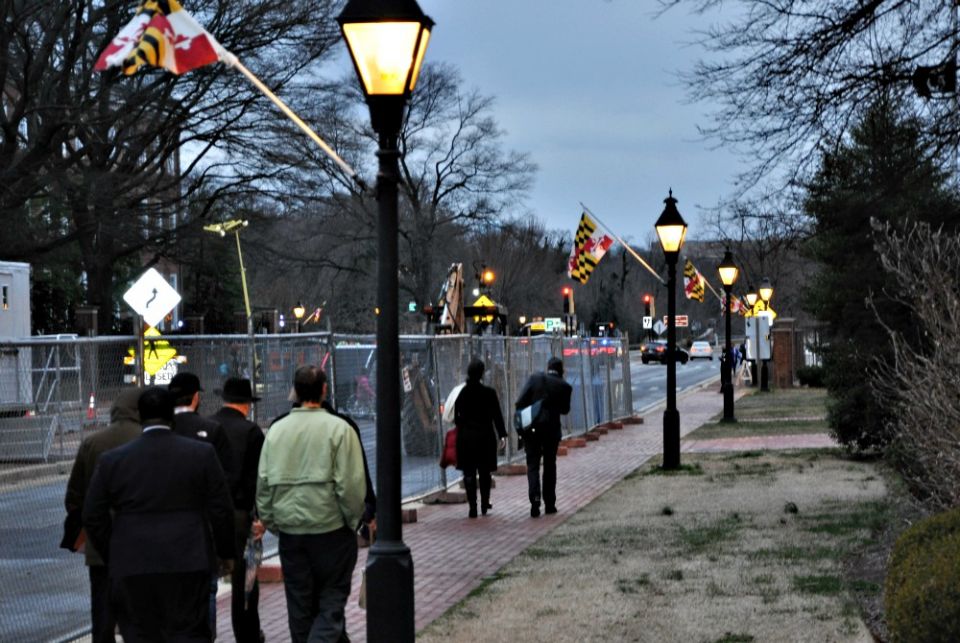 Members of Maryland Catholics for Our Common Home walk outside of Maryland State House to meet with state representatives. (NCR photo/Jesse Remedios)

Annapolis, Md. — To see the impact of climate change on their state, the Maryland Catholics gathered in the state capital one day last week had only to look out the window of their meeting room.

There, the shores of the Chesapeake Bay are quickly encroaching, threatening the grounds of historic St. Mary's Parish in Annapolis, a short walk from Maryland's state capitol building.

The National Oceanic and Atmospheric Administration projects that St. Mary's will experience 2 feet of inundation by 2050 and an additional 5-10 feet by 2100. What's more, the church's campus is increasingly vulnerable to storm surge from hurricanes — which scientists expect to intensify as both ocean temperatures and sea levels continue to rise.

Established in 1853 by the Congregation of the Most Holy Redeemer, St. Mary's sits on property once owned by Charles Carroll, the only Catholic to sign the Declaration of Independence. It was in his home that the group of 30 Catholics came together hoping to generate a little bit of political influence of their own. 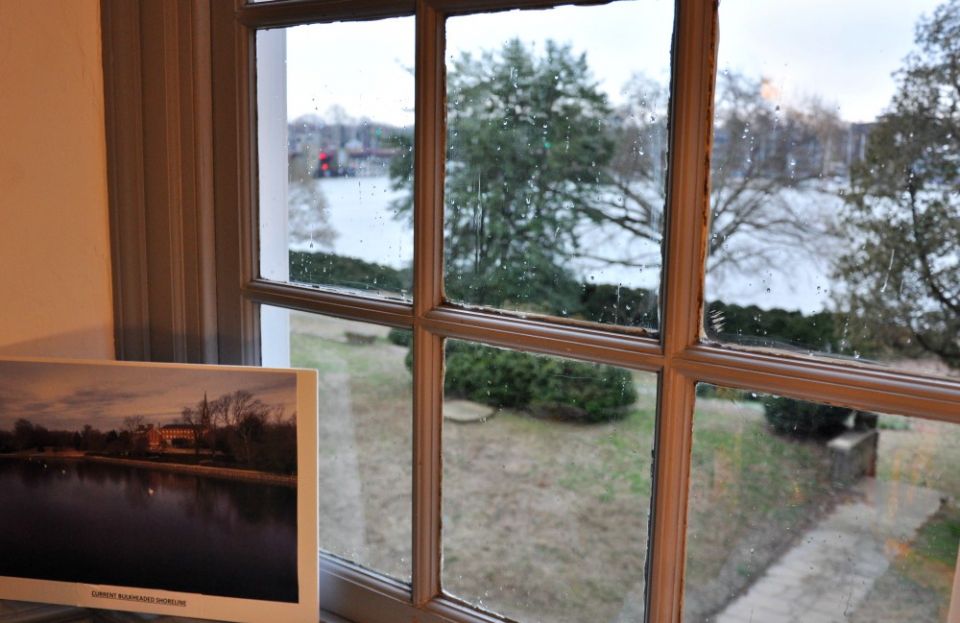 View of the Chesapeake Bay outside the window of St. Mary’s Charles Carroll House. Rising sea levels are already threatening the grounds of the historic church. (NCR photo/Jesse Remedios)

The group, called Maryland Catholics for Our Common Home, was one of many participating in the state of Maryland's annual "Lobby Night" on March 2. The program invites state residents to meet with their district representatives to discuss issues important to them. The Maryland Catholics were there to advocate for five key bills that they believe address climate change and equity.

"We have to look at the national element," said Doug Demeo, a pastoral associate at Our Lady of Mount Carmel in Essex, Maryland. "But each state, each region, each municipality has its own impact and its own responsibility."

The effects of climate change are already being felt hard around the state. In Annapolis, St. Mary's is not the only historic institution under threat. The U.S. Naval Institute published an article in October warning that the U.S. Naval Academy may be forced to relocate in the next hundred years due to rising sea levels. 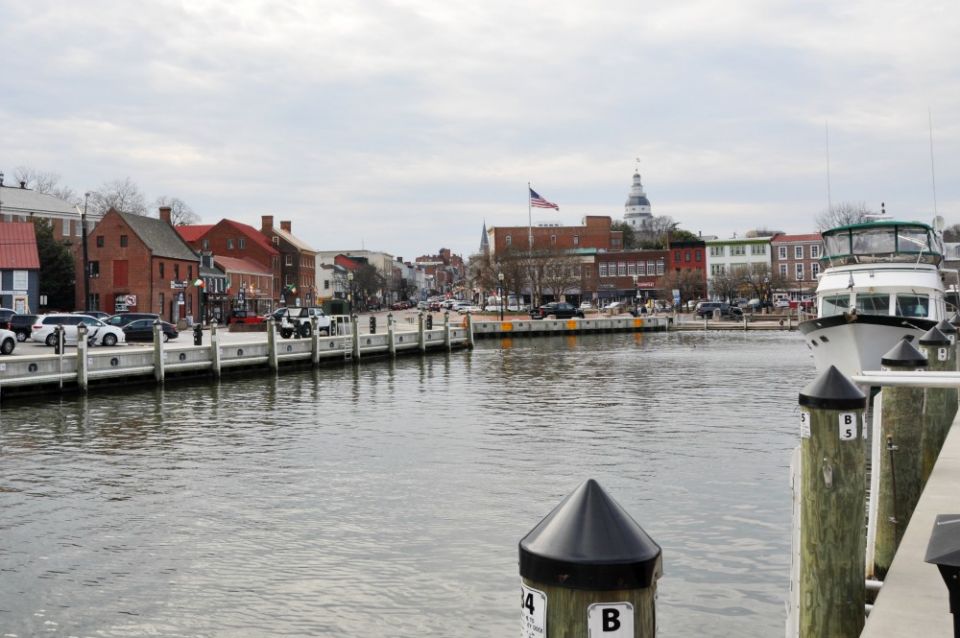 Maryland’s state capital, Annapolis, sits right on the Chesapeake Bay. The city is already experiencing costs from rising sea levels, which are expected to increase over time due to climate change. (NCR photo/Jesse Remedios)

Members of Maryland Catholics for Our Common Home are mostly focused on the impact of climate change on marginalized communities. In Baltimore, for example, an investigation by NPR found the hottest neighborhoods in the city are usually the poorest, sometimes with deadly health consequences for those residents.

The five bills chosen by Maryland Catholics were selected with environmental justice in mind. While addressing broad environmental protection goals, such as a significant reduction in the state's greenhouse gas emissions, two of the bills are aimed specifically at protecting low-income communities.

One bill seeks to stop trash incineration in the state, a practice that releases polluting emissions that disproportionately hurt low-income communities and communities of color. Another bill would provide more taxpayer dollars to Maryland's public transportation system, which the advocates say many low-income residents rely on. 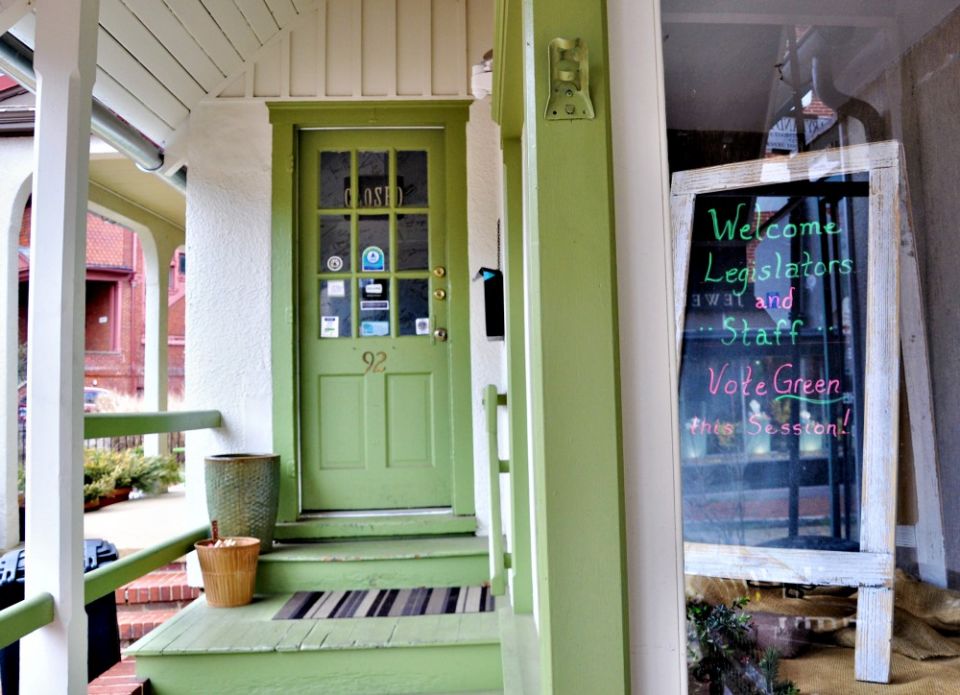 "Catholic teaching connects the principle of care for creation with giving priority to the needs of the poor and concern for and solidarity with workers, and we think these bills reflect that comprehensive vision," said Bob Simon, a retired energy and climate policy expert and a primary organizer of the group.

Before lobbying their representatives, the advocates met for a "teach-in" event at St. Mary's, a short walk from the Maryland State House.

Teach-ins were popularized by student groups during the antiwar movement of the 1960s, galvanizing activists as well as providing them with practical information for their actions. 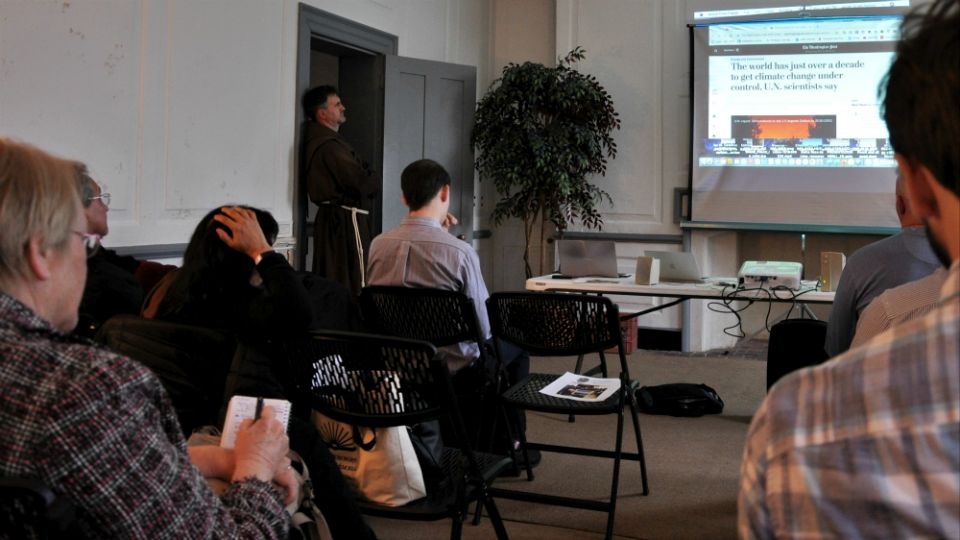 As part of their teach-in, Maryland Catholics watch a short video on the urgency of addressing climate change. (NCR photo/Jesse Remedios)

The teach-in wrapped up with a presentation from Ramon Palencia-Calvo, deputy executive director of the Maryland League of Conservation Voters. Palencia-Calvo shared tips for best practices on a legislative visit, among them:

Legislators don't expect citizens to be experts, he said, but everyday people do have information nobody else has: personal stories about why these issues matter to them. For Maryland Catholics for Our Common Home, this included explaining how faith informs their advocacy.

Palencia-Calvo ended his presentation by stressing the importance of "making the ask." This means either asking the legislator to support the bill or bills being discussed, or asking how the group can get the legislator more information to make a decision.

Heading into lobby night, Sandra Perez, a parishioner and staff member at St. Camillus Church in Silver Spring, said she was eager to participate.

"As an immigrant from Central America, I am well aware of the connection between climate and migration crises," she said. "As both a Catholic and U.S. citizen, I have a moral obligation to speak up and support policies that help to clean up our environment and promote environmental justice at home and abroad."

Ottoniel Perez, a cousin of Sandra Perez who is also a parishioner at St. Camillus, wanted his representatives to know they had constituents who are aware of the issues and want to advocate for "the least of us." Both legislators were receptive to the Maryland Catholics advocacy and framing of issues through a lens of faith, he said. 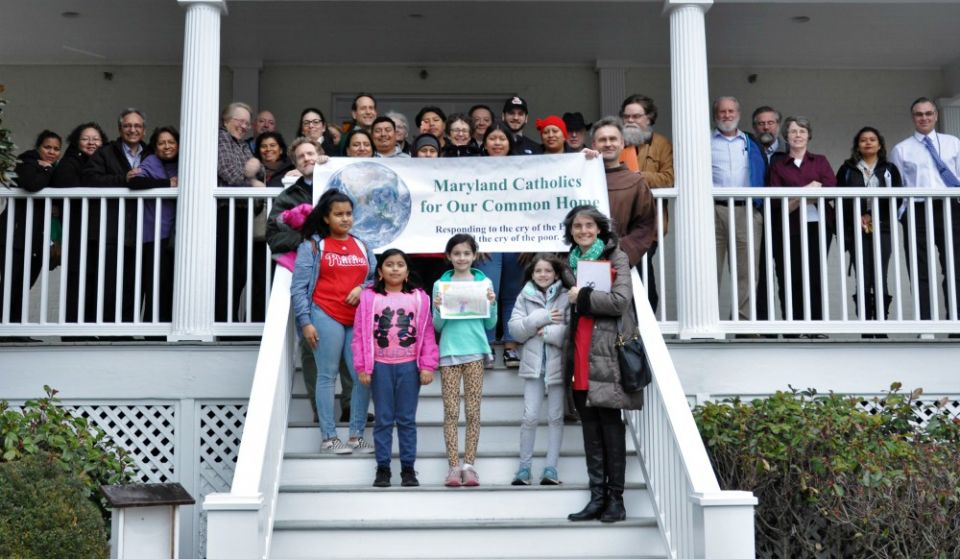 In fact, legislators proved eager to continue their conversations with the Catholic advocates.

On March 4, Maryland Catholics for Our Common Home was invited to provide testimony for the record and speak at a March 5 House of Delegates hearing on one of the bills the Catholics lobbied for, House Bill 1545.

At the committee hearing, Simon used his opportunity as the faith-based voice on an expert witness panel to focus attention on the needs of working people.

"[HB 1545] will eliminate the pollutants from coal-fired plants that directly threaten the health of overburdened communities," he said. "And we note and particularly applaud the bill's provisions funding worker and community transition, which we see as responsive to key principles of Catholic social teaching." 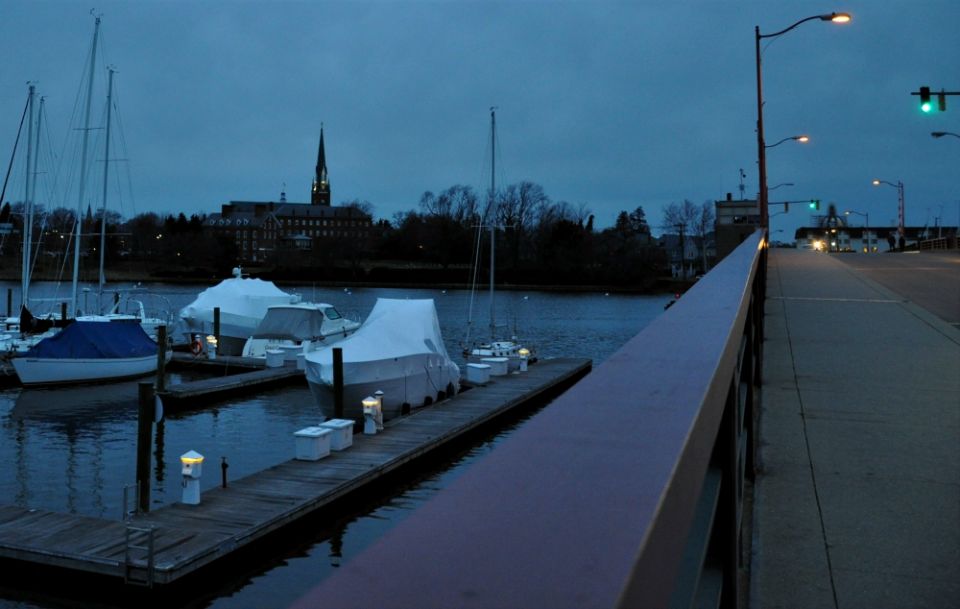