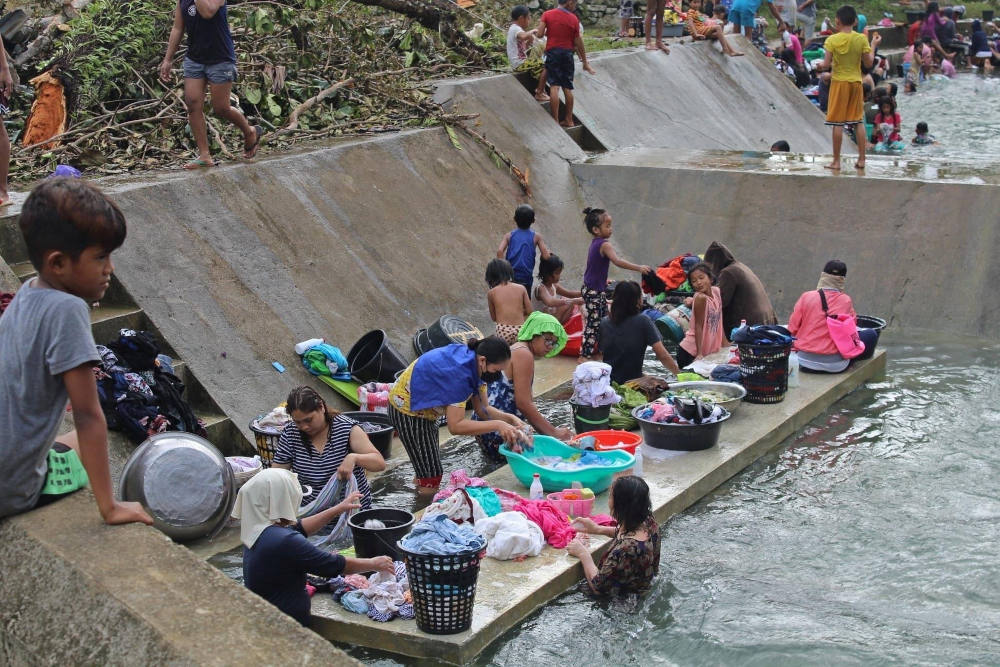 Residents clean their clothes near a river near Surigao City, Philippines, Dec. 18, 2021, in the aftermath of Typhoon Rai. The storm has claimed more than 370 lives. (CNS photo/Philippine Coast Guard handout via Reuters) 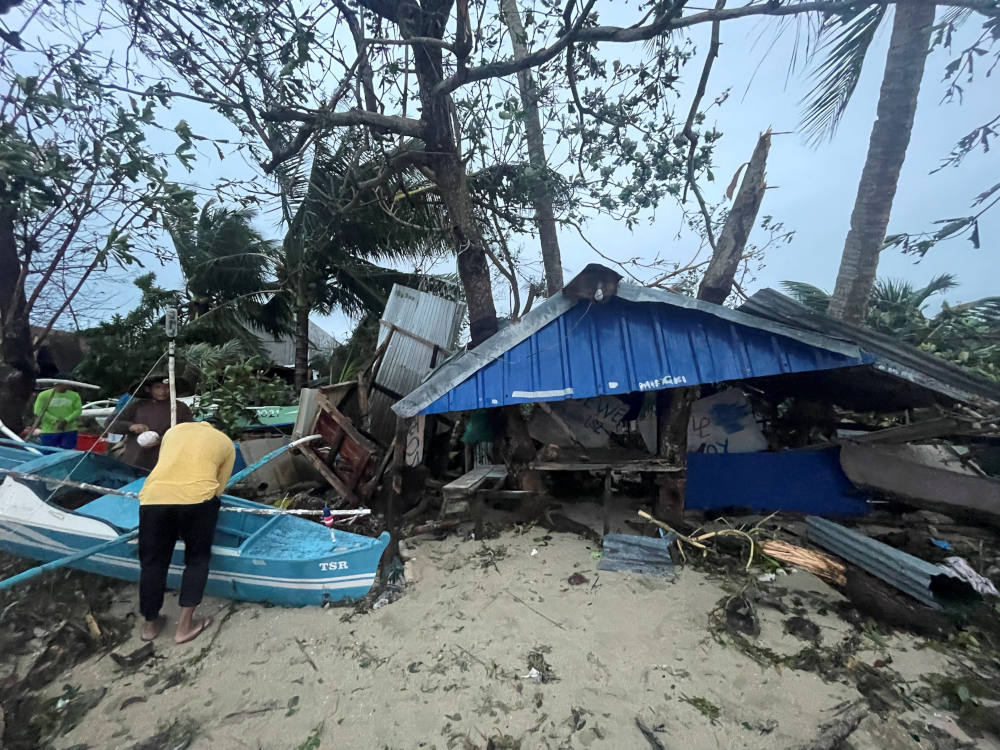 A man looks through debris in Dimiao, Philippines, Dec. 17, 2021, in the aftermath of Typhoon Rai. The storm has claimed at least 375 lives and Caritas Philippines appealed for donations to bolster its emergency response. (CNS photo/Marco J. Dagasuhan, social media via Reuters)

Catholic bishops in the Philippines have declared Christmas Day and Dec. 26 as national days of prayer and mourning for victims of Super Typhoon Rai that ravaged southern and central parts of the country.

The bishops' conference Dec. 20 called on all dioceses to dedicate both days to those affected by the storm, which weather observers said was the most powerful to make landfall in the island nation this year, ucanews.com reported.

The Philippine National Police said Dec. 21 that the death toll had risen to 375 while 56 people remained missing. Hundreds of people were injured and more than 400,000 people were displaced by the intense storm, which made landfall several times Dec. 16-17.

Richard Gordon, head of the Philippine Red Cross, said in a statement the typhoon was among the strongest ever known to have struck the country. About 20 typhoons make landfall in the Philippines annually. The storm, known as Odette in the Philippines classification system, was the 15th to hit the island nation this year.

Philippine authorities said Dec. 20 about half the reported deaths occurred in the island province of Bohol, in central Visayas, a popular tourist destination, ucanews.com reported. Cebu province and Cagayan de Oro city in the central part of the country also were among the most devastated areas.

The Catholic Bishops' Conference of the Philippines also encouraged dioceses to hold a second collection at all Masses during the days of prayer for the victims.

Bishop Pablo Virgilio David of Kalookan, conference president, appealed to Catholics to reconsider having extravagant parties and instead donate what they would have spent to the typhoon victims.

"Perhaps instead of spending on a lot of lavish Christmas parties and exchanging gifts, we can put together whatever we can and contribute to relief operations," he said in a Facebook post.

He also posted a text message from Bishop Antonieto Cabajog of Surigao, one of the worst-hit areas, describing the storm and appealing for aid.

"Blinding torrential rains and howling winds no man could take standing up hammered us for more than three hours. Not only were trees uprooted and rooftops ripped from homes battered like dollhouses, electric power and all forms of communication were cut off, literally isolating us from the rest of the world," Cabajog said.

David urged parishioners to donate to the Alay Kapwa Solidarity Fund, which is used by the Catholic Church in the Philippines in response to emergencies.

"We encourage everyone to remit all collections to Caritas Philippines that will then plan and implement our overall response," he said. 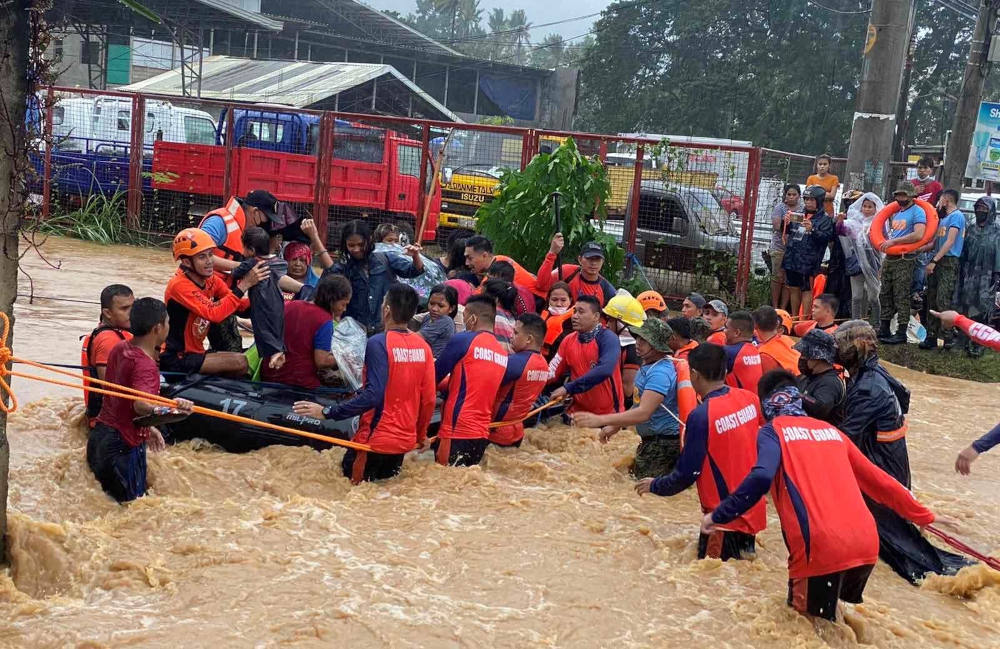 "It's a challenge how we can distribute aid because there is a total blackout (no electricity or cellphone service) in the area," he said.

Living Laudato Si' Philippines was among other Catholic groups organizing aid and financial relief for the typhoon's victims and vulnerable communities in the Visayas and Mindanao regions.

Rodne Galicha, executive director of Living Laudato Si' Philippines, said in a statement that the devastation wrought by the typhoon underlines the faith-based call for Christians to work toward mitigation of climate change and to support adaptation measures "to prevent further catastrophe that affects the lives of thousands of people, especially the vulnerable and marginalized."

He referenced a passage from Pope Francis' 2015 encyclical, "Laudato Si', on Care four Our Common Home" where the pope stated that "Along with the importance of little everyday gestures, social love moves us to devise larger strategies to halt environmental degradation and to encourage a 'culture of care' which permeates all of society."

"Let us not forget that some of our worst imagined climate emergency is already a constant reality for many of our fellow Filipinos," Galicha said, as he called for prayers for those impacted during this Advent and Christmas season, and "everyone to open their homes, share their spare and lend a hand to those who are in need." 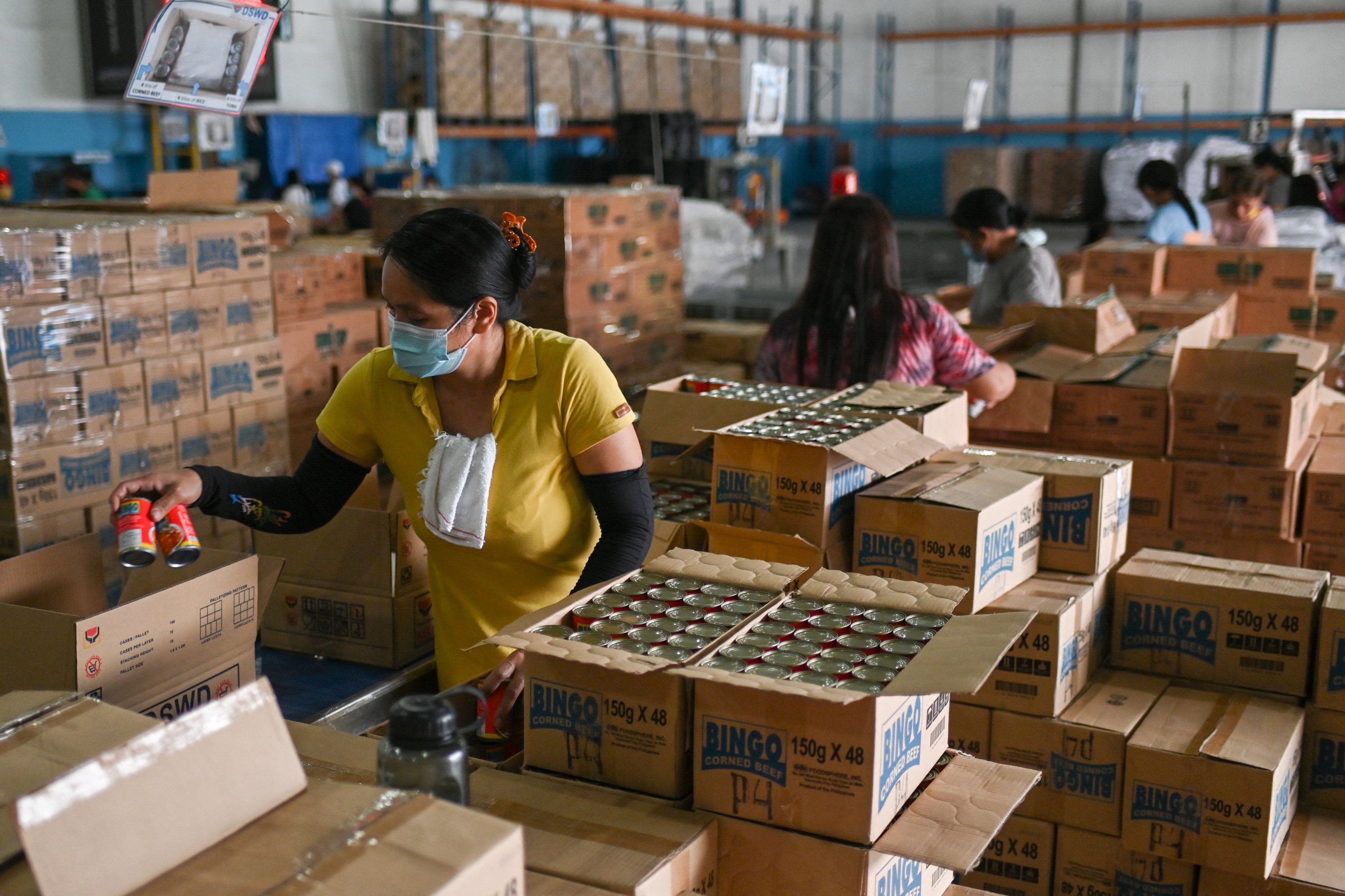 "CRS staff and partners on the ground are assessing the damage caused by Typhoon Rai. We have prepositioned 10,000 emergency shelter kits, 2,000 water purification kits, 1,700 hygiene kits and 1,700 cooking kits for distribution in hardest-hit areas," Karen Janes Ungar, CRS country representative in the Philippines said in a press release.

"We are concerned for those in coastal areas, particularly the elderly, children and the disabled," Ungar added. "We are also concerned about the safety of families in evacuation centers especially since COVID-19 continues to be a threat."

The agency also said that the evacuation of thousands of people ahead of the storm likely saved lives.

A report from a CRS emergency program officer in southern Leyte province, where the typhoon made landfall twice, reviewed the devastation caused by gusting winds and heavy rain.

The officer, Aprilyn Villamar, said up to 90% of homes were destroyed and water distribution was disrupted in the region.

"People need ready-to-eat meals, water, thermal kits and emergency shelter, but delivery of humanitarian aid remains a challenge because many roads are not passable and not yet cleared of fallen trees and electric posts," Villamar said. "Many families also need livelihood support. Fishers lost their boats and farmers their crops."

CRS said that some families in the southern Philippines are traveling at least three hours to markets and banks in Butuan City. The islands of Siargao and Dinagat remain isolated because of damage in ports.