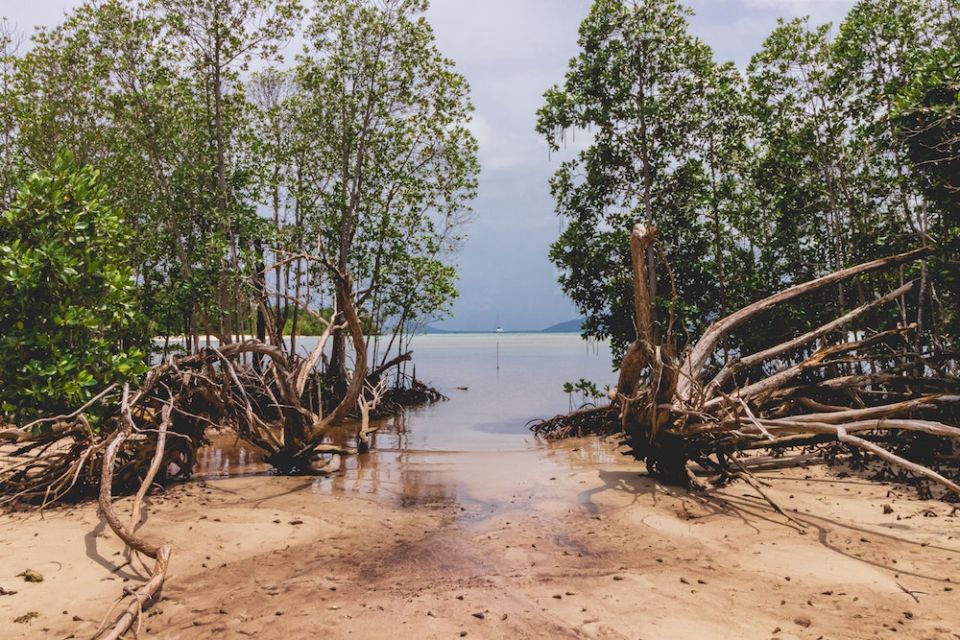 Pope Francis urges restoration of critical ecosystems, including mangroves like these, which have been damaged or destroyed by human action. (Dan Maisey/Unsplash)

To restore nature, we must first restore ourselves, Pope Francis said June 4 in a message at the opening of a decadelong United Nations effort aimed at reviving the world's threatened ecosystems.

"We are a part of nature, not separated from it. This is what the Bible tells us," Francis said. "The current environmental situation calls us to act now with urgency to become ever more responsible stewards of creation and to restore the nature that we have been damaging and exploiting for too long.

"Otherwise," he added, "we risk destroying the very basis on which we depend."

Francis' message was read by Cardinal Pietro Parolin, the Holy See secretary of state, during a June 4 virtual launch event for the U.N. Decade on Ecosystem Restoration.

The global initiative, which officially begins on World Environment Day, June 5, seeks to accelerate efforts to revitalize life-sustaining ecosystems amid increasing threats from human activities, including pollution, deforestation and the burning of fossil fuels.

The pope echoed scientists in saying that the current decade is critical for stopping or reversing the environmental destruction that has fueled climate change and threatened as many as a million species with extinction.

"The many 'warnings' we are experiencing, among which we can see COVID-19 and global warming, are pushing us to take urgent action," he said.

"And yet there is hope," Francis continued, saying that humanity has the freedom to limit and direct technology and economics to better serve people and the planet, and to usher in "another type of progress, which is healthier, more human, more social, more integral."

"Ecosystem degradation is a clear outcome of economic dysfunction. Restoring the nature we have damaged means, in the first place, restoring ourselves," Francis said.

"As we welcome this United Nations Decade on Ecosystem Restoration, let us be compassionate, creative and courageous. May we take our proper place as a 'Restoration Generation,'" the pope said.

The Decade on Ecosystem Restoration runs until 2030, the deadline the global community has set for achieving the 17 Sustainable Development Goals, as well as a critical checkpoint for the Paris Agreement on climate change. Scientists have said that to have a chance at limiting global temperature rise to 1.5 degrees Celsius above preindustrial levels and avoid catastrophic climate impacts, total greenhouse gas emissions must be nearly halved by 2030.

Many countries have rallied behind the "30x30" campaign, which calls for conserving 30% of the world's lands and ocean by 2030 to safeguard biodiversity and biomes and to slow the loss of species, though some Indigenous leaders and environmental groups say that percentage is too low.

The Vatican has also made the 2020s a period of accelerated sustainability action in the church. In late May, Francis and the Dicastery for Promoting Integral Human Development previewed the Laudato Si' Action Platform, which aims to mobilize Catholics and church institutions to act on the integral ecology message of the pope's 2015 encyclical "Laudato Si', on Care for Our Common Home."

In his message, Francis said he hoped the COP 26 U.N. climate summit scheduled for November, which Vatican officials say he is considering attending, will "help to give us the right answers to restore ecosystems" through stronger climate action and greater awareness.

The pope added that the current crises of environmental destruction, COVID-19 and climate change, along with the "unjust consequences of some aspects of our current economic systems," are reminders of the shared responsibility "to leave a habitable common home for our children and for future generations."

"We need to take care of each other, and of the weakest among us," he said. "Continuing down this path of exploitation and destruction — of humans, and of nature — is unjust and unwise. This is what a responsible conscience would tell us."