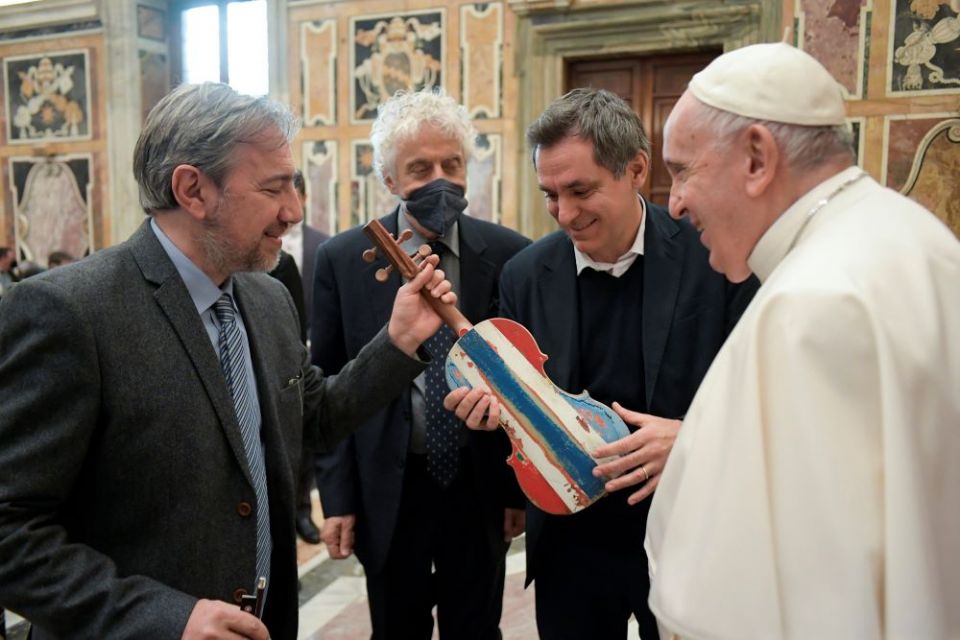 Pope Francis accepts a violin that prisoners in Milan made from the wood of a shipwrecked refugee boat during an audience with members of the Casa dello Spirito e delle Arti Foundation at the Vatican Feb. 4. The foundation sponsors projects for people with disabilities, refugees, single mothers and those recovering from addiction. (CNS/Vatican Media)

Vatican City — Pope Francis and his guests listened as a violinist played a tune from a famous Italian composer on a multicolored violin prisoners made using the wood of a shipwrecked migrants' boat.

He also accepted several boxes containing hundreds of hosts for use at Mass; prisoners made some of them, as did residents of communities for people with disabilities, refugees, single mothers and people recovering from addiction.

"You give signals that oppose the throwaway culture, which unfortunately is widespread," the pope said Feb. 4 as he welcomed members of the Casa dello Spirito e delle Arti Foundation and people involved in the projects they sponsor.

Rather than throwing away both people and things, the pope told them, "You are trying to build, with the 'rejected stones,' a house where you can breathe an atmosphere of social friendship and fraternity. Not everything is easy — we know —- not everything is 'roses and flowers.' Each of us has his or her limits, mistakes and sins. But God's mercy is greater, and if we welcome each other as brothers and sisters, he forgives us and helps us to move on."

Supported by the foundation, master violin makers from Stradivari Institute of Cremona went to a Milan prison in 2013 and began teaching prisoners how to make violins. They use wood recovered from boats that have sunk or been scuttled by the coast guard after attempts to bring migrants across the Mediterranean to Italy.

Oscar-winning composer Nicola Piovani wrote the tune "Il Violino del Mare" (The Violin of the Sea) specifically to be played on one of the unique instruments.

The workshop has expanded, and the prisoners now are using the recuperated wood to make Nativity scenes as well.

The host-making project, with a special press for making thin, embossed hosts, has expanded to 16 countries with a variety of communities involved. The hosts are given free to local parishes and religious congregations. 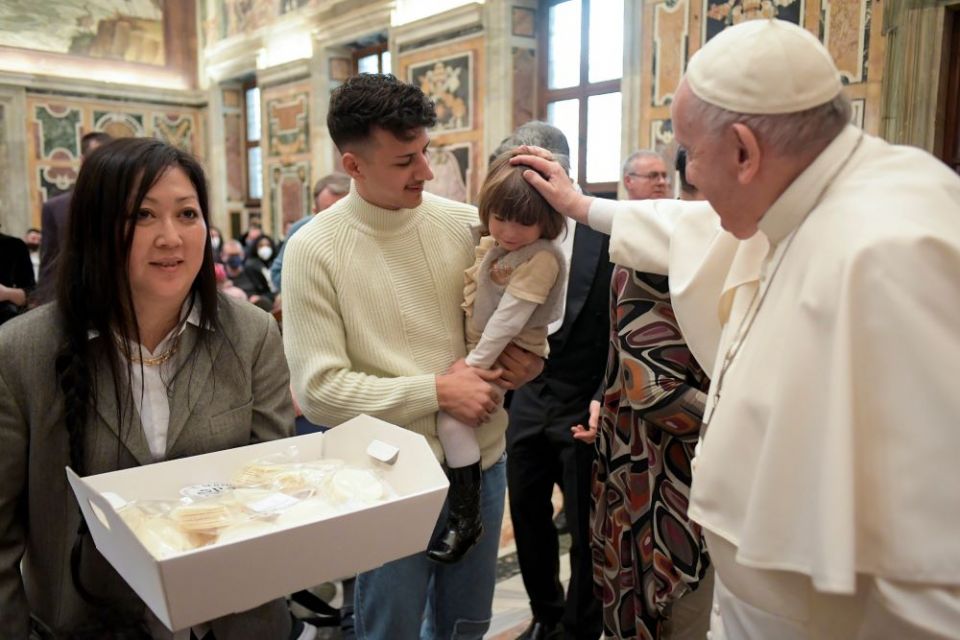 Pope Francis accepts Communion hosts as he greets people during an audience with members of the Casa dello Spirito e delle Arti Foundation at the Vatican Feb. 4. (CNS/Vatican Media)

One of the center's latest projects, which began in October, involves making altar wine from the grapes grown in the 2.5-acre vineyard at the Alba prison in northern Italy.

"These are artisanal activities, and they also have a symbolic Christian value," the pope told his guests. "Preparing hosts for the eucharistic celebration; making musical instruments from the wood recovered from migrants' boats; carpentry, like St. Joseph and Jesus; the production of wine, which is a symbol of celebration like the wedding at Cana."