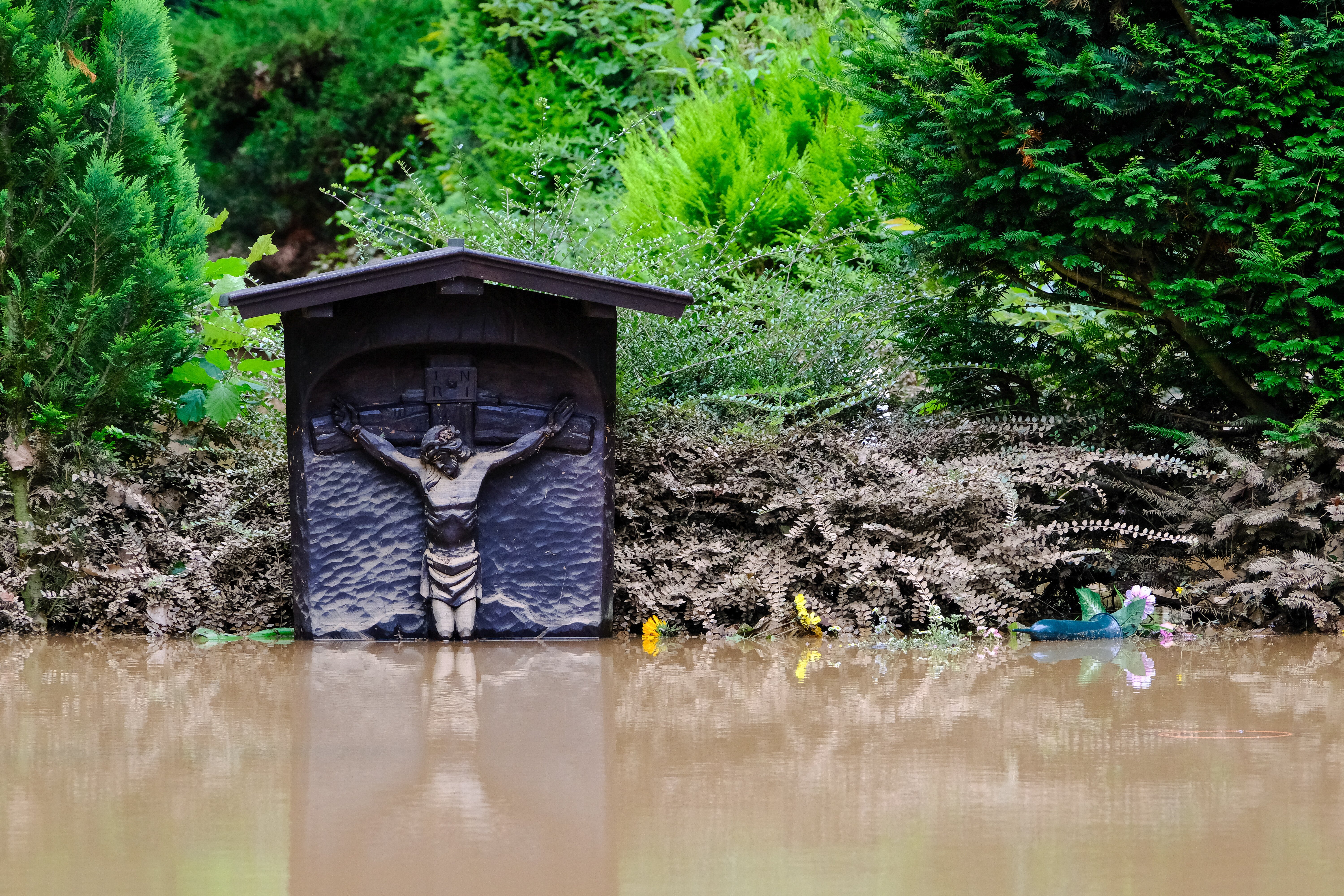 A grave marker is surrounded by floodwaters at a cemetery in Erftstadt, Germany, July 16, 2021. Aid agencies in developing countries more accustomed to dealing with natural disasters have offered words of compassion and concern in response to Germany's disastrous flooding. (CNS photo/Henning Schoon, KNA)

The images of flooded villages and towns in Germany have shocked the world, prompting aid agencies in developing countries more accustomed to dealing with natural disasters to offer words of compassion and concern to one of Europe's most prosperous nations.

In Tel Aviv, Israel, the town hall was illuminated in black, red and gold — the colors of the German flag — a symbol that would have been difficult to imagine 20 years ago, reported the German Catholic news agency KNA.

Although Germany will not need aid for reconstruction, dioceses globally and partners of the Catholic-run charities such as Aid to the Church in Need, Misereor, and the Caritas Internationalis network in places such as Cuba, Honduras, India, Mali, Philippines and Zimbabwe have sent messages of support and solidarity to German church relief agencies.

It's a reversal of roles, in which countries in the global south that have long been affected by climate change and devastating natural disasters are offering whatever comfort they can to the developed north.

"This solidarity is touching and perhaps a small consolation for the people who lost loved ones as well as their belongings in the flood," said Florian Ripka, managing director of Aid to the Church in Need Germany.

Ripka said her agency has received message from Lebanon, Ukraine and Papua New Guinea. "Even if our project partners cannot help materially, they are close to the people with thoughts and prayers," she said.

Misereor, the German bishops' organization for development cooperation, reported receiving similar messages. "It shows us that solidarity is not a one-way street," the charity said.

Many of the messages have conveyed concern that climate-related hazards can strike with great force even in temperate zones.

The executive director of Caritas India, Paul Moonjely, wrote that the disaster was a "wake-up call" to start tackling the urgent climate problem vigorously.

He also spoke of gratitude, saying: "People in Germany have always been helpful and willing to reach out to suffering populations around the world, especially in India." Now people in India wanted to give something of this "deep feeling" back to the Germans, he said.

Islamic associations in Germany such as the Turkish-Islamic Union for Religious Affairs, known as Ditib, Millî Görüs and Islamic Relief also asked members for donations. The associations reminded Muslims that the recent pilgrimage to Mecca and the July 19-23 observance of Eid al-Adha, the Islamic feast of sacrifice, call for mercy toward all people.

Meanwhile, the commissioner for environmental and climate issues at the German Catholic bishops' conference, Bishop Rolf Lohmann, said the flood disaster, which claimed more than 200 lives across Europe, is a "sign of a change in the climate and the environment."

After the heat and drought of past years, "the inconceivable catastrophe of heavy rain and floods" now was an illustration of climate change, he told KNA.

In addition to immediate emergency aid, long-term measures to protect against floods were needed, said Bishop Lohmann, who is auxiliary bishop in Muenster in the state of North Rhine-Westphalia, which sustained widespread damage.

There also is a need for "rapid and efficient action against climate change. If we do not act decisively now, it will be too late," he said, explaining that the responsibility to act falls on individuals as well as governments.

Bishop Lohmann called for the wider use of renewable energy, product procurement based on ecological and social criteria, reducing waste and environmentally friendly forms of transport.

He also demanded that social equality be considered when implementing environmentally sound measures so that they are affordable for all social groups. Finally, he added, it was important to adhere to ethical criteria in financial investments.