by Brian Roewe
This article appears in the COP24 Poland feature series. View the full series. 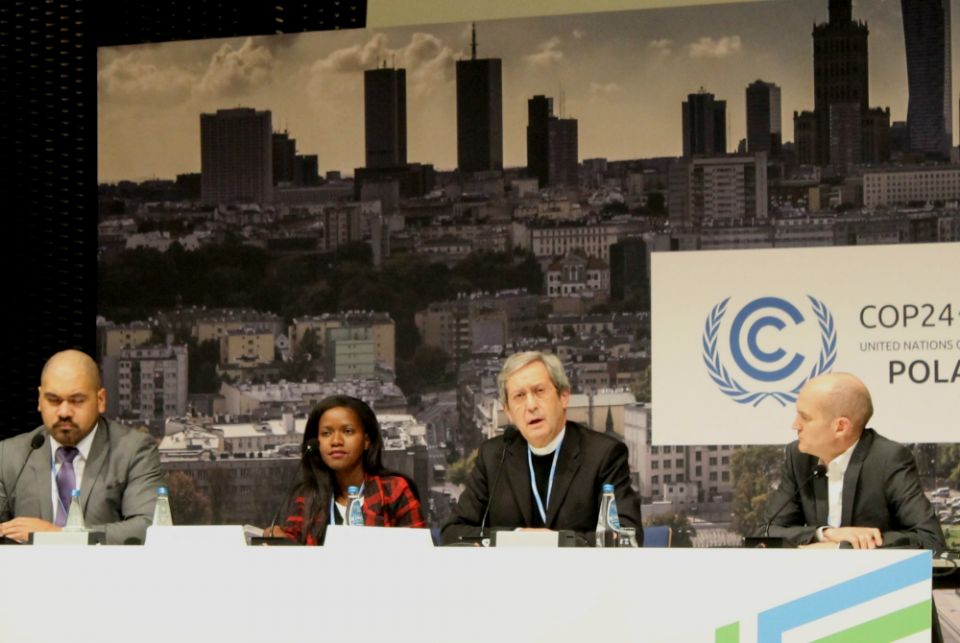 Msgr. Bruno-Marie Duffé, second from right, head of the Holy See delegation at COP24, speaks at a press conference Dec. 12 in Katowice, Poland. With him are, from left, Joseph Sapati Moeono-Kolio of Pacific Climate Warriors, Mercy Chirambo of Caritas Malawi, and Neil Thorns of CAFOD. (NCR photo/Brian Roewe)

Katowice, Poland — As the United Nations climate summit here winds down, unclear whether it will produce redoubled political efforts to limit global warming, the Vatican delegation delivered a turn on the old adage to not put off till tomorrow what can be done today.

"We often say that the situation of our planet needs decisions for tomorrow," Msgr. Bruno-Marie Duffé, head of the Holy See delegation at COP24, said at an impromptu press conference Dec. 12. "But tomorrow is today. Tomorrow is today."

The Dec. 2-14 conference began this year with a major scientific report projecting the world on pace to reach dangerous warming levels as early as 2030 — less than a dozen years away. Duffé called it "a special moment in our [human] history."

Repeating Pope Francis' call to listen to the cry of the Earth and the cry of the poor, he urged a renewal of global solidarity on the part of nearly 200 governments to their commitment to the address the "social crisis" posed by climate change through the goals outlined under the Paris Agreement. Those goals include limiting average temperature rise between 1.5 degrees Celsius (2.7 degrees Fahrenheit) and 2 degrees Celsius (3.6 F) compared to pre-industrial levels.

At one point, Duffé suggested the conference produce a solidarity agreement by the time it concludes, scheduled for Dec. 14.

"We have to pass from the ethical intentions about climate, about the future of life on this Earth, to financial and political decisions," the monsignor said.

Later in the day, the Vatican delegation met with COP24 president Michal Kurtyka, Poland's secretary of state, and offered its support in achieving the conference's goals.

The focus at COP24 has been finishing a rulebook on implementing the Paris climate accord, which went into force in November 2016. Many also arrived anticipating governments would demonstrate an increased drive toward action, in light of the scientific reports on how climate change is reshaping the world and other reports that show current national pledges would only limit warming to 3 C by century's end, and that countries are behind in even meeting those targets. 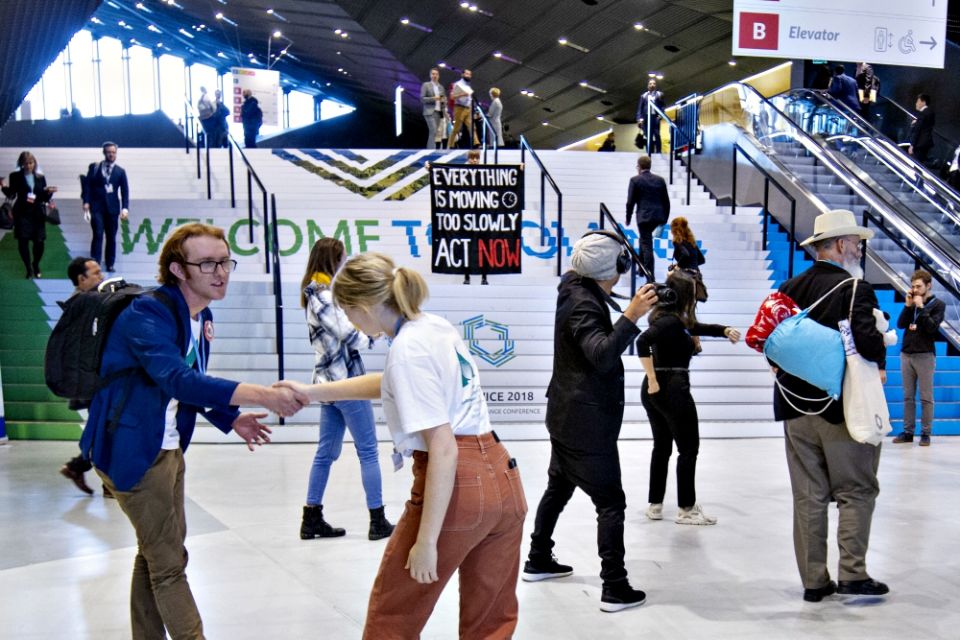 In an interview with NCR, Duffé said, "I feel a gap between the urgency" in terms of the decisions the conference must make and the commitment of some delegates, naming specifically Russia and Saudi Arabia.

At the end of the summit's first week, those two nations joined the United States and Kuwait in opposing the word "welcome" in a statement regarding the U.N. Intergovernmental Panel on Climate Change special report, released in October, on holding average global temperature rise to 1.5 C — the higher-bar goal of the Paris Agreement. Those four countries instead preferred the report simply "note" the panel's report, which was commissioned by the 195 nations that adopted the Paris accord at COP21 in December 2015.

What might appear as word nitpicking carries significance given what "welcome" stands for in the statement — essentially, a recognition and endorsement of the report's findings, among them that global emissions must be halved by 2030 and reach net-zero by 2050 to stave off the worsening droughts, rising seas and human suffering that scientists say accompany warming above 1.5 C.

At one point in his remarks, Duffé said, "We have to encourage the scientific community, especially reading and considering" the latest Intergovernmental Panel on Climate Change report.

On Dec. 10, the Pontifical Academy of Sciences hosted scientists and faith leaders at a daylong event on climate research and ethics, with Patricia Espinosa, executive secretary of the U.N. Framework Convention on Climate Change, in attendance.

"It's ludicrous that we asked for the report and then when the report arrives we don't welcome it," Joseph Sapati Moeono-Kolio, a member of the Pacific Climate Warriors, said at the press conference. "It's a bit of a self-defeating logic and it harms the most vulnerable communities in Africa and the Pacific and around the world."

He and Mercy Chirambo of Caritas Malawi spoke to the present realities in those two regions of the world, as they put it the "human face" of climate change. Chirambo expressed hope that focusing on that human aspect, rather than simply looking at the science, will lead to the "very urgent action" needed to combat climate change.

In recent years, the growing season for Malawi has shortened and rains have come later and less reliably, leading to some farmers shifting to irrigation. This has strained food security, Chirambo said, a major issue for a country predominantly reliant on agriculture.

But the tolls have taken form beyond economics, she said, including an emotional impact, especially for women who are viewed in the southern African nation traditionally as the homemakers, expected to ensure children are educated and well-fed.

Sapati, a 31-year-old Samoan living in New Zealand who was among the young people who attended the Vatican synod on youth in October, said that today the faces of climate change are most commonly viewed as those of vulnerable and indigenous people. But without significant progress in Katowice, he added, "all of us sooner or later will be the faces of climate change." He highlighted the devastating wildfires in California in recent years.

At the end of the first week of COP24, New Zealand issued a defense policy statement that labeled climate change its most significant security threat.

Sapati praised the leadership demonstrated by countries most acutely impacted by climate change. Before the conference began, the Marshall Islands became the first country to submit a second nationally determined contribution (U.N. parlance for revised climate pledge). On Wednesday, Fiji, host of last year's U.N. climate conference, joined current host Poland in issuing the Talanoa Call to Action — a follow-up to the Talanoa Dialogue initiated at COP23, which emphasizes inclusive conversations to address collective issues — that talking and listening must now give way to more ambitious action.

Join the Talanoa Call for Action! #TakeYourSeat with Greta and Timoci in urging world leaders to step up #ClimateAction https://t.co/g0q66JjGzq#COP24 pic.twitter.com/gpyelT4RUK

Duffé acknowledged the actions that have been made on climate change, that while "urgent action" is needed from political leaders, history has shown progress can occur at all levels of society. He added that part of the role of the Holy See, which is a nonvoting member, is to offer hope, particularly for young people, that the world will take steps together to care for its common home.

In a standing-room-only plenary speech later Dec. 12, former U.S. vice president and prominent climate activist Al Gore said, "The rising generation is demanding a better world," and called climate change "the single most important moral choice that humanity has ever faced." Twice he referenced Francis' teachings in the 2015 encyclical "Laudato Si', on Care for Our Common Home" about the poorest and most disadvantaged across countries and continents suffering the greatest impacts of climate change.

Read this next: COP24: It's not about resources anymore; it's about moral maturity

A version of this story appeared in the Dec 28, 2018-Jan 10, 2019 print issue under the headline: Vatican COP24 delegation urges climate solidarity .