Vatican helps get water to hospitals in the 'Global South' 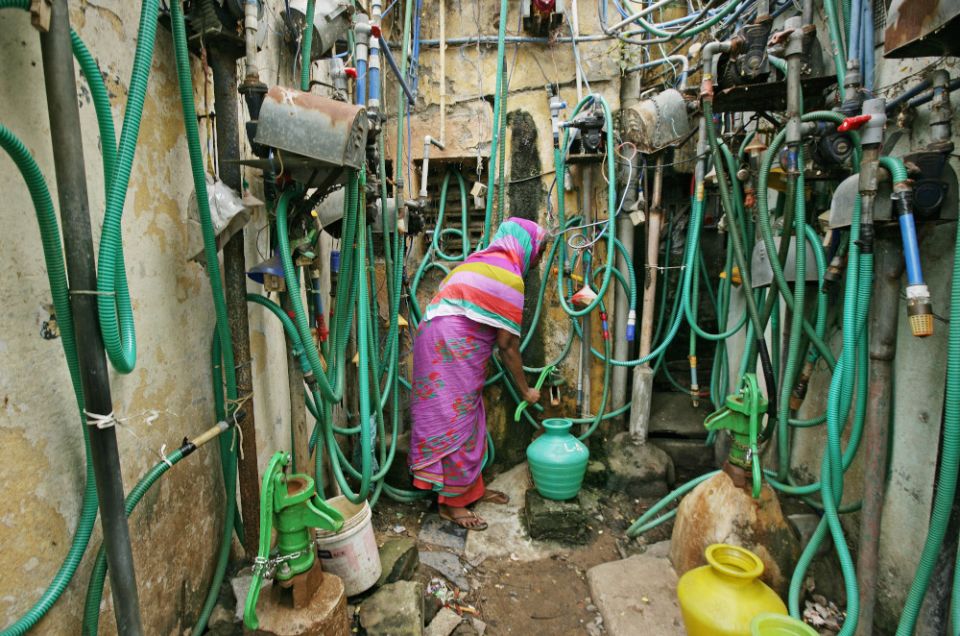 A woman uses a hand pump to fill up a container with drinking water in Chennai, India, in this June 25, 2019, file photo. The Vatican's Dicastery for Promoting Integral Human Development said more investment and action are needed to ensure people have access to clean and safe water for drinking and sanitation. (CNS photo/Reuters/P. Ravikumar)

Vatican City — "Here, when you are hospitalized, you often have to take water with you. There's not enough for everyone."

This is the situation in Kisantu, a town about 100 kilometers south of Kinshasa, the capital of the Democratic Republic of the Congo.

At the 300-bed Saint Luke Hospital, access to water is so scarce that the management has decided to limit its use to the most essential needs, such as cleaning or washing hands before an operation.

"We should build a water tower," says François Kangela, who works for Catholic Relief Services in Kinshasa.

At the Vatican's initiative, Saint Luke's is one of 150 health facilities to undergo an expert appraisal in recent months.The program is called "WASH" and is being carried out in 23 developing countries. The goal is to identify all the problems that Catholic-run health centers face in accessing water.

And this work was the focus of a four-day conference last week in Rome.

It was opened on May 24 at the close of the "Laudato si' Special Anniversary Year," named after Pope Francis' 2015 ecological encyclical "on care for our common home."

In fact, WASH is part of the Holy See's longstanding efforts to remind world leaders of the vital need to ensure people's access to water.

For example, a papal delegation attended the World Water Forum in Kyoto in 2003.

"Access to drinking water and sanitation are fundamental human rights and are pillars in the defense of human dignity and the fight against poverty," explains Tebaldo Vinciguerra, the man in charge of the WASH project.

Work on the hospitals began last summer in the Dicastery for Promoting Integral Human Development.

The dicastery's prefect, Cardinal Peter Turkson, wrote to all the bishops of the world asking them to report to the Vatican any health establishments experiencing difficulties in accessing water.

A few weeks later, volunteer facilities filled out a six-page questionnaire, aimed at identifying their problems.

"There are shortcomings that can be easily fixed, such as repairing a faucet or setting up habits like having healthcare workers wash their hands regularly," continues Vinciguerra."

But others require more time and resources, such as drilling a well or building a water tower, for example in countries prone to severe droughts or in hospitals that pump their water from a river that can become muddy during floods," he points out.

There are a number of more expensive needs and the Vatican is now looking for funding.

Vinciguerra says it is not an easy task.

"It is much more gratifying for a donor to give money to finance a new operating room than to unblock wells, buy filters or finance pumps," he notes.

Other projects to be undertaken are more educational programs.

This is the case, for example, in the Diocese of Moroto, in the north-east of Uganda, which is located in a semi-desert region not far from the Kenyan border.

Bishop Damiano Guzzetti, a Comboni Missionary, says he's relying on the Rome-sponsored programs to help him train the staff of the hospital and the eight health centers in the diocese.

"The hospital has a sufficient supply of water, but the centers don't," the bishop explains.

"It's not enough to install water pumps," he continues. "A lot of education needs to be done to explain how to use them."

EarthBeat | Vatican helps get water to hospitals in the 'Global South'