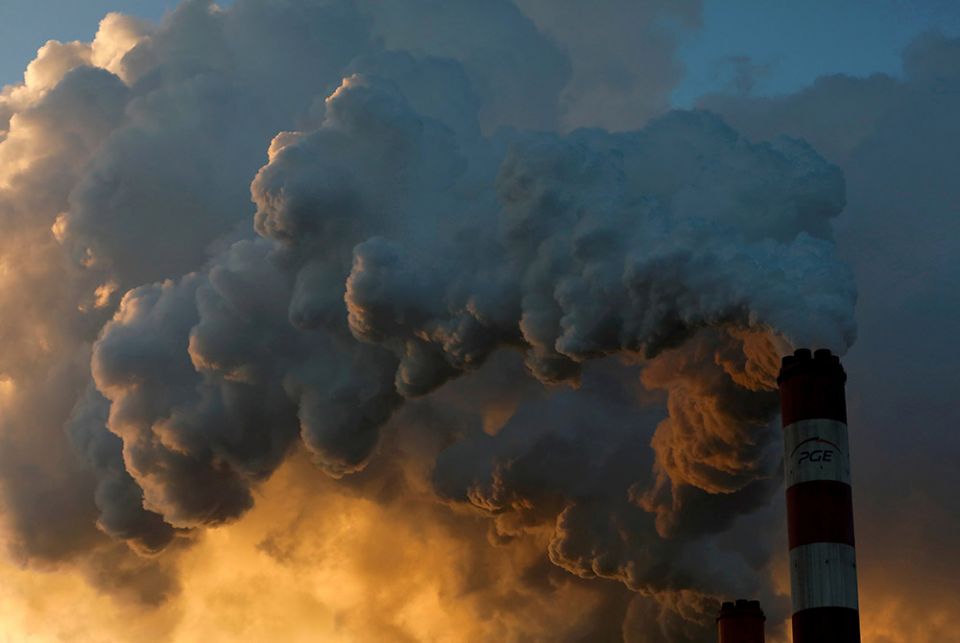 A coal-fired power plant is seen in this illustration photo. (CNS/Kacper Pempel, Reuters)

An official in the Vatican Dicastery for Promoting Integral Human Development urged Catholic institutions around the world to divest from fossil fuels, calling it a moral and theological imperative and a response to Pope Francis' groundbreaking encyclical on the environment.

"We know that the fossil fuels are causing the climate crisis and destroying our planet. Still, we keep on investing [in] the dirty fossil fuels," said Salesian Fr. Joshtrom Kureethadam, head of the dicastery's ecology and creation sector, referring to it as a schizophrenic act. "It is a physical imperative that we change course, that we divest."

"Science dictates us this course," he said, adding that "it is also a moral imperative. Our own brothers and sisters around the world are already suffering due to the climate crisis, and we cannot push them to greater sufferings."

"It is also a theological imperative," Kureethadam said. "Earth is God's creation entrusted to our stewardship. We need to take care of God's creation. So let us be courageous. Let us divest."

Kureethadam made the remarks in the video message that began a May 19 Laudato Si' Week webinar on the topic of fossil fuel divestment. The event was part of the week's official program, sponsored by the integral human development dicastery, which closes a yearlong celebration of the pope's 2015 encyclical "Laudato Si', on Care for Our Common Home." 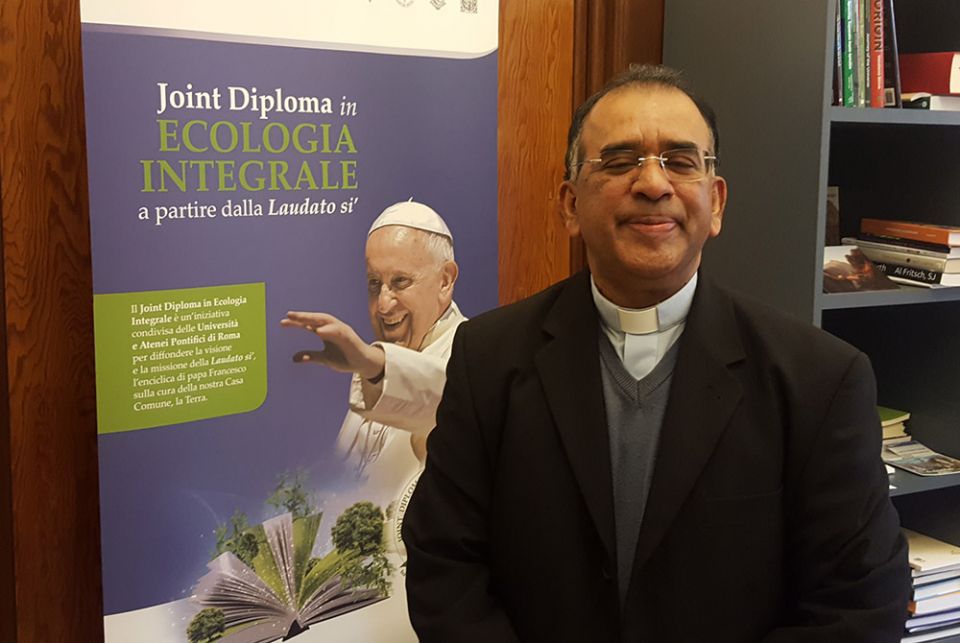 The dicastery official's appeal was one of the most direct statements about divestment to date from the Vatican, which has become increasingly vocal about the need to shift finances away from fossil fuels.

As part of the Laudato Si' Year, the Vatican issued guidelines on ways Catholics can implement the idea of integral ecology and other messages that Francis emphasized in the encyclical.

Among the recommendations was divesting from fossil fuels and reinvesting in renewable energy infrastructure. The Vatican's forthcoming Laudato Si' Action Platform, set for a soft launch May 25, also endorses a divest-reinvest strategy.

Kureethadam said those initiatives, along with Laudato Si' itself, ask that church organizations shift their finances away from the fossil fuel sector and industries harmful to the planet and people.

"So let us listen to Pope Francis' invitation to divest from fossil fuels and to protect our common home," he said.

So far, roughly 250 Catholic institutions have publicly committed to divestment, or to continue to avoid investments in the fossil fuel sector. The latest 21 were announced May 17 as part of a joint announcement of 36 divesting faith organizations from 11 countries coordinated by a campaign of the Global Catholic Climate Movement. Another five were announced during the webinar. Among the newly divesting Catholic groups were a half-dozen dioceses in Ireland.

Bishop Brendan Leahy of Ireland's Limerick Diocese said that divestment is "a practical step to respond to the cry of humanity," in response to both climate change and increasing inequality and insecurity.

His diocese was part of the week's divestment announcement. It took the step roughly three years after the Irish bishops' conference did the same in response to a campaign led by its overseas development agency Trócaire. Leahy said the public declaration of divestment, especially in numbers, can help motivate others to follow and also to take other steps toward ecological conversion.

Cardinal Jean-Claude Hollerich, president of the Commission of the Bishops' Conferences of the European Union, which along with his Luxembourg Archdiocese have both divested, said the urgency of climate change requires the church and all people to take action to stem global warming now. That includes lifestyle changes, which he said will be difficult.

"We have to start with simple things. And I think that disinvesting from fossil fuel, as compared to other things we also should do, is in fact the easiest point. It's a start," he said.

While financial studies have shown fossil fuel market values in decline, Hollerich said the pursuit of maximizing profit, even with the goal of using that money for good, is "a big temptation, because it's completely wrong."

"We have to show the politicians that this is our true desire. And that it also means that we accept perhaps a loss of income for saving the planet," the cardinal said. 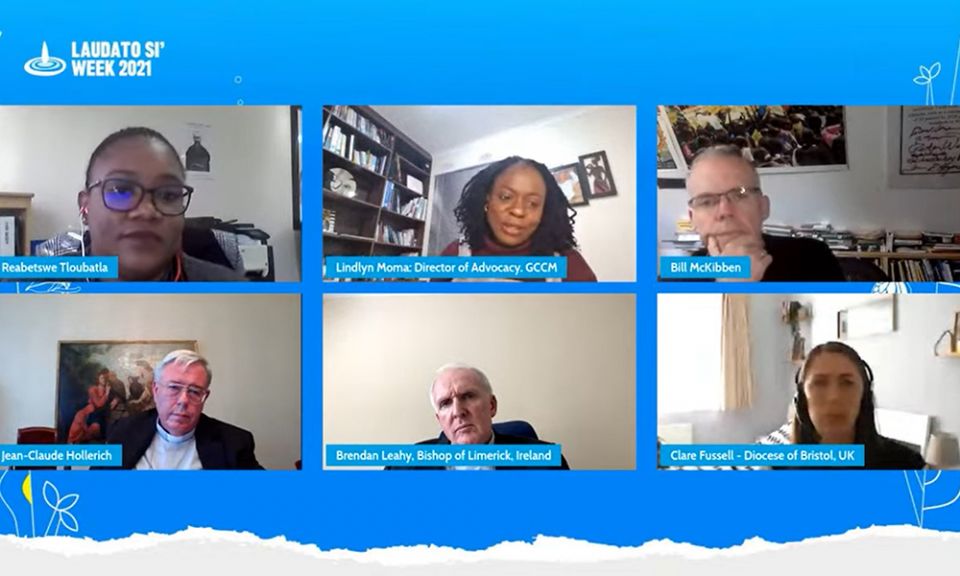 A webinar during the Vatican-sponsored Laudato Si' Week on May 19 discussed the topic of energy, fossil fuels and divestment. (NCR screenshot)

Reabetswe Tloubatla, a staff member of the Denis Hurley Peace Institute of the Southern African Bishops' Conference, described the social costs of fossil fuel extraction in that country's coal mining region, where many residents suffer from chronic lung diseases related to polluted air.

In nearby Mozambique, where the institute also works, liquefied natural gas extraction and processing has polluted mangrove forests and freshwater sources and displaced communities. The operator recently announced plans to move processing facilities to an island off the coast, where Tloubatla fears the ecological decimation will be repeated.

"You cannot extract all of these fossil fuels from the earth and burn coal for electricity, as we do here, and not have it have a direct, negative impact on people, on animals, on plants, on water that is around where you do that," she said.

Bill McKibben, the environmental writer and climate activist who has been a leader in the 350.org Go Fossil Free campaign, applauded the role that faith groups and the Catholic Church, and particularly Francis, have played in the divestment movement.

"If you wanted proof that the Holy Spirit was at work in the world, one could do worse than think about the fact that it's … a young Swedish school girl and a not-so-young Argentinian pope that are helping drive the movement forward to deal with this gravest of problems," he said, referring to youth climate strike founder Greta Thunberg.

McKibben said ending financial support for the fossil fuel industry is one of the important levers for responding to climate change, and joined others in encouraging dioceses and church organizations to take that step.

"I'm no theologian, but it's nice to live in a moment when we can move from energy from down below to energy from up above," he added.

Asked how Catholics might approach their dioceses to ask them to reconsider fossil fuel investments, Hollerich said that bishops often are busy and attending to many issues at the same time. He likened his fellow prelates to grandfathers who are likely to listen to their grandchildren, and suggested that young Catholics write to them with their concerns about climate change.

"So please, the young people," he said, "tell your grandfather bishop about disinvestment."