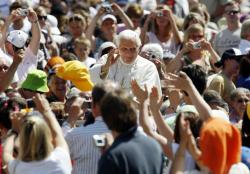 Pope Benedict XVI waves as he arrives to lead his general audience in St. Peter's Square at the Vatican June 3. (CNS/Reuters/Giampiero Sposito)

As the old joke goes, you could lay all the economists in the world end to end, and they would never reach a conclusion. Yet beginning in the late 19th century, one pope after another has ventured into this notoriously contentious and uncertain field, producing a sprawling body of economic analysis that forms the core of what's known as "Catholic social teaching."

Pope Benedict XVI will bring this tradition into the 21st century with his long-awaited new social encyclical, Veritas in Caritate ("Truth in Charity"), set for release before his summer break begins July 13. Benedict recently described it as a meditation on "the vast theme of the economy and work."

While Veritas in Caritate is addressed to the world, it could have special resonance in America, where some may be tempted to read it as a blueprint for the church's relationship with U.S. President Barack Obama -- especially since the economy is one area where Catholic teaching and the Democratic Party platform aren't always at loggerheads.

Since Leo XIII's Rerum Novarum in 1891, which addressed the rise of industrial capitalism, social encyclicals have tended to coincide with moments of global upheaval. Pius XI's Quadragesimo Anno in 1931 came during the Great Depression; Paul VI's Populorum Progressio in 1967 reflected the ferment of decolonization; and John Paul II's third and final encyclical on the economy, 1991's Centesimus Annus, followed the collapse of the Soviet Union. Benedict's new encyclical continues this legacy, as its release has been delayed for almost two years in order to reflect on the present global economic meltdown.

The working class and the poor

Catholic teaching on economic justice often carries direct implications for politics, and in political terms it's been largely cheered by the left, but viewed with ambivalence on the right.

Pope John XXIII's 1961 encyclical Mater et Magistra offers a classic example. Issued at the height of the Cold War, it condemned both East and West for diverting resources that could be used for the poor into the arms race. In reply, American Catholic writer Garry Wills, then still in his conservative phase, coined the immortal protest, "Mater si, Magistra no!" Similar consternation followed Paul VI's explicit call for higher taxes in wealthy nations to fund international aid programs in Populorum Progressio.

At the heart of Catholic social teaching is solidarity with the working class and the poor. Leo XIII set the tone, charging that in the era of robber-baron capitalism, "A small number of very rich men have been able to lay upon the teeming masses of the laboring poor a yoke little better than slavery itself." Pius XI was equally acerbic in condemning an "international imperialism of money."

To be sure, all modern popes have defended the right to private property, condemned communism and socialism, and embraced a principle of "subsidiarity" limiting the power of the state. Yet there's also deep skepticism that the invisible hand of a market economy will necessarily be benign, and a clear accent on the common good over individual profit. As John Paul II put it in 1987's Sollicitudo Rei Socialis, private property carries a "social mortgage."

As a result, popes have supported labor unions, called for antipoverty efforts such as debt relief, and endorsed a host of positive rights for workers, such as a just wage, health care, decent working conditions and pensions.

Anyone surprised by the seemingly progressive thrust of all this should recall that in the beginning, popes weren't trying to be avant-garde. They took a dim view of free markets for the same reason they were suspicious of religious freedom and a free press -- because they saw economic liberalism as part of a broader Enlightenment-inspired attack on tradition. Both capitalism and communism seemed "twin rocks of shipwreck," as Pius XI put it, meaning allegedly scientific attempts to construct a social order without traditional moral or spiritual wisdom.

In its early stages, papal social teaching seemed nostalgic for the medieval era, in which church-sponsored craft guilds buffered relations between labor and capital. The guild system provided the template for various attempts to find a Catholic third way between capitalism and communism, including such now-obscure theories as solidarism, distributism and corporatism.

John Paul's Centesimus Annus in 1991 was an important turning point, because it effectively brought this quest for a third way to a close. After the implosion of Soviet-style socialism, the late pope endorsed a market economy as the best way to foster "free human creativity in the economic sector." Even Centesimus Annus, however, hardly extols laissez-faire capitalism. John Paul insisted that the economy must be governed by a "strong juridical framework," the heart of which must be "ethical and religious."

In wider Catholic conversation, this social teaching plays to mixed reviews. Admirers describe it as the church's "best-kept secret," wishing it were better known and more widely accepted. To critics, it's a classic example of clergymen exceeding their competence. In 2004's The Church and the Market, Thomas Woods charged that papal social teaching sometimes ignores economic reality, with "calamitous" impact on the very people it's trying to help.

Critics also typically distinguish between the values expressed in social teaching, such as human dignity and solidarity, and the specific economic policies popes have either advocated or opposed. The latter, they argue, are not matters of faith or morals, and hence open to legitimate dissent. Philosopher Étienne Gilson's famous quip is oft-cited: "Piety is no substitute for technique."

Be that as it may, there's little reason to believe that Benedict XVI will depart from the broad approach sketched by his predecessors.

Two years ago, for example, Benedict wrote to Chancellor Angela Merkel of Germany, which held the rotating presidency of the G8 at the time, to insist that measures to help poor nations -- including debt relief, "broad and unconditional access" to markets in wealthy countries, and combating diseases such as AIDS and malaria -- represent a "grave and unconditional moral responsibility."

Well before Benedict's election to the papacy, his basic economic philosophy seemed clear. In a 1988 essay, then-Cardinal Joseph Ratzinger argued that capitalism is little better than Nazism or communism, because all three worship false idols (profit, the Volk and the state, respectively). A degree of economic populism may be hard-wired into the pope's DNA. His great-uncle, Msgr. Georg Ratzinger, helped found a 19th-century political party, the Bauerbund, representing poor farmers against large industrial concerns.

Veritas in Caritate in Caritate continues to push for government efforts to assist the poor, it could strengthen the hand of Catholics in the United States eager for collaboration with the Obama administration. If nothing else, almost anything Benedict says on the economy may help the pro-Obama camp by giving American Catholics something to ponder other than abortion.

Veritas in Caritate will also be the first social encyclical clearly conceived in the era of globalization, and experts will be anxious to see whether Benedict picks up what many regard as a key unanswered question in Catholic social teaching: What would a "strong juridical framework" for the economy look like in a 21st-century world?

Jesuit Fr. John Coleman has observed that a broad swath of governance today is not performed by national governments, but by intergovernmental bodies such as the World Trade Organization, or by private agencies such as Standard and Poor's (which regulates the $5 trillion bond market). The power of nation-states is also limited by the rise of multinational corporations such as the banking conglomerate HSBC, with assets of $2.5 billion, greater than the GNP of all but five nations. Because Catholic social doctrine has little to say about these actors, Coleman believes it remains "much too vague and moralistic."

Experts hope that the global economic crisis that first erupted in mid-2007, which raised precisely the question of regulation in sectors such as banking and capital markets, may prompt the pope to offer some new thinking along these lines.

Veritas in Caritate is expected to be dated June 29, the Feast of Sts. Peter and Paul. It's the 40th anniversary of Ad Petri Cathedram, the first encyclical of Pope John XXIII, the subtitle of which was "truth, unity and peace in a spirit of charity" -- seemingly echoed in Benedict's title, "Truth in Charity."