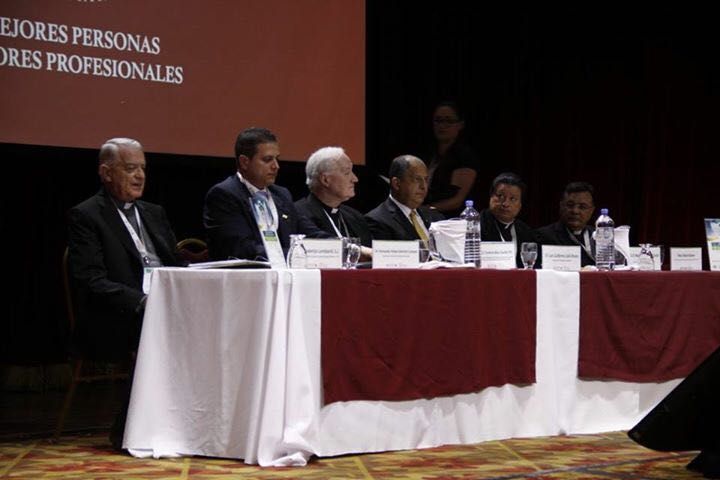 Moravia, Costa Rica — Universities worldwide may be answering a call to become their communities' environmental consciences if they take an active role in an awareness effort launched by the Catholic University of Costa Rica, based on Pope Francis' environmental encyclical, Laudato Si', on Care for Our Common Home."

The effort includes the launching of the Laudato Si' Observatory and the release of the first results contained in the Laudato Si' Social and Environmental Development Index. The index was developed from key actions taken during the symposium "El Cuidado de la Casa Común, una conversión necesaria a la ecología humana" ("On Care for Our Common Home, a necessary conversion to human ecology"), held Nov. 29 through Dec. 1 in Costa Rica.

The observatory and the index are meant to have an impact on the development of countries as well as environmental public policy, and universities are seen as a channel for this, Catholic University rector Fernando Sánchez told NCR at the education center´s headquarters in Moravia, a district on the northeastern outskirts of San José, the Costa Rican capital.

The first such meeting held in Latin America — coinciding with Catholic University's 25th anniversary — the symposium, which was organized by the university and the Fondazione Vaticana Joseph Ratzinger — Benedetto XVI, was grounded on several basic premises, according to Sánchez.

"The first is that this is a real problem, it's an urgent problem, it's a global problem we can't simply ignore," and "the other thing is that, despite the data, we should not face this from a fatalistic perspective," he said.

Sánchez referred to data gathered for the first index, covering 127 countries that hold around 97 percent of the planet's population. According to the study "more than 55 percent … live in conditions, whether human or environmental, that are not acceptable according to the Holy Father and the Laudato Si' encyclical," said Sánchez, an ex-congressman of the former ruling Partido Liberación Nacional (National Liberation Party) and a former Costa Rican ambassador to the Vatican.

"The Holy Father tells us: neither think that with some technical measures we'll solve the problem nor think that any human intervention is harmful — a balance must be sought," Sánchez said. This "must be done with a positive vision, one of hope, knowing that things can be changed because, if not, what are going to make the effort for?"

The effort calls for continuity, which opened the way for the creation of the Laudato Si' Observatory. Headquartered at the university in Costa Rica, its various aims include drawing up and publishing the index on a yearly basis. The observatory's main purpose is sharing the index with as many universities, Catholic and non-Catholic, as possible, and producing a local and international compilation of the best practices to help improve each country's index, Sánchez explained.

Sánchez underlined that since the encyclical, which he described as "within the church's social doctrine," deals with two major topics, "human development and environmental development or sustainable development." Prior to the symposium meetings were held with experts who, for years, have been measuring both situations.

Once it is published, if "we manage to have universities interested in receiving the index, the idea is for them to publicize it in their countries so they can also explain what's going on, why we did poorly or well, what we did wrong or well," Sánchez added. 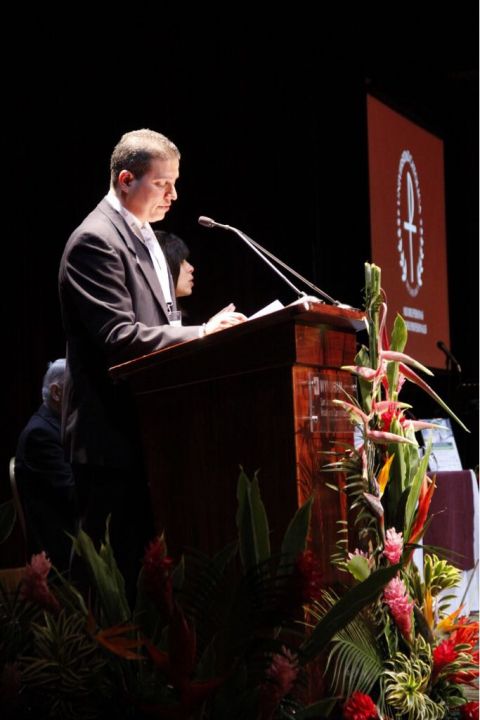 Fernando Sánchez, rector of the Catholic University of Costa Rica, takes part in the opening session of the Laudato Si’ symposium. (Courtesy of George Rodriguez)

Regarding the possibility of any positive action being taken, the universities "can tell us what initiatives in their countries are … pushing the index upward and are thus responding to what the pope is asking of us," he said.

"The aim is that it acts as some kind of impact measure starting from the Holy Father's exhortations. And this is the observatory's other major goal: to cause positive impact wherever we have access," Sánchez said.

"At the end of the day, we'd want to be able to say that somehow, for some reason, knowledge of the index will generate some impact on the public policy of nations. That would be a major future goal, but if we have to have an impact … we have to publicize it," he added.

That is where universities come in.

"The first thing that's going to happen is that those of us who adopt this have to be consistent universities," because "we can't go around preaching to everyone a conversion to human ecology if our university has not converted to human ecology," said Sánchez.

Some progress in this regard had been made already before the symposium, including the creation of Laudato Si' professorships and, in the case of Brazil's Pontificia Universidade Católica do Rio de Janeiro (Pontifical Catholic University of Rio de Janeiro, PUC-Rio), the creation of rooftop gardens.

Sánchez stressed that some universities have been taking Laudato Si'-type initiatives: "What happens is that the symposium brings us all into a logic. So, now it will be very interesting to see how much universities that accept this initiative actually change."

In his view, the encyclical's major advantage is that it deals with an awareness issue more than a religious one.

"There could hardly be a more ecumenical issue than the environmental issue because we're all in the same, common home. Doctrinal differences have no weight. Awareness and responsibility have weight," he said. "We have some fertile ground to work on."

[George Rodriguez, a freelance correspondent based in Costa Rica, has reported for Reuters and other international news agencies.]