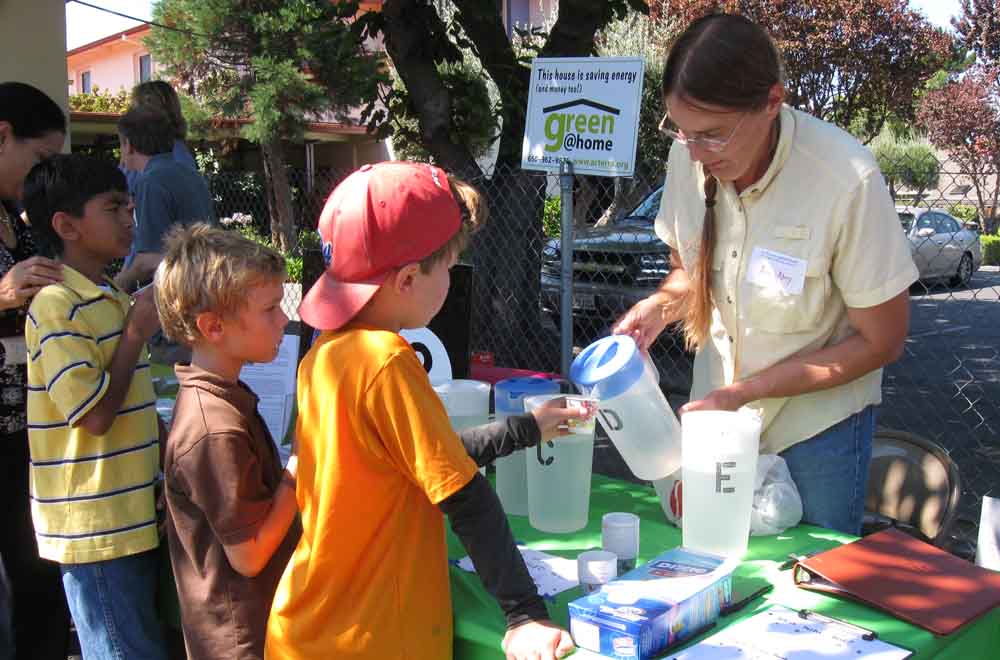 Can we cut our plastic waste?

The problem of single-use plastics and other quickly disposable items isn't an easy one to solve.

At times it can seem impossible to escape the products, so prevalent they are in daily life in what Pope Francis has termed the "throwaway culture," from plastic foam cups and plastic-lined coffee cups, to straws and paper sacks and leftover food, to plastic lids, plastic wrappers, plastic wrapping and plastic bags.

For Catholics seeking to reduce their own consumption, the parish often provides a first area. Hospitality gatherings after Mass and other social events offer a chance to not only recognize how much waste a community regularly produces, but also an opportunity to do something about it.

This is Part 3 of a three-part series looking at the challenge posed by plastic pollution — the theme of Earth Day 2018 — and how Catholic parishes and communities are taking steps to reduce the waste and change lifestyles.

What are some first steps Catholic parishes can take toward reducing waste and addressing the throwaway culture?

A toolkit created by the Earth Day Network, which set ending plastic pollution as the theme for the 48th Earth Day celebration, suggests a three-step process that any group or individual can follow:

While recycling often gets the most attention, Merino said it's reduce that is "the core idea. … We think that unless we reduce consumption, everything else is minor." According to a 2017 study in Science Advances, cited by the Earth Day Network, there has been 9.1 billion tons of plastic produced since the 1950s, with that number expected to grow to 13.2 billion tons by 2050. Of that 9.1 billion tons of waste so far, just 9 percent has been recycled, while 79 percent has ended up in landfills or scattered throughout the environment.

"You should recycle, for sure, but you should do something more than just recycle. And I think the first thing is reduce," she added during the webinar.

The Earth Day Network toolkit, along with Catholic Climate Covenant's Earth Day program titled "Beyond a Throwaway Culture: Reduce Waste, Grow Community," offer additional tips to get started. One idea they suggest: declining a plastic straw at restaurants, or purchasing a glass straw to carry with you.

Paz Artaza-Regan, program manager for Catholic Climate Covenant, has started doing just that, finding that the "no straw, please" request can sometimes catch servers off guard. She told NCR she has tried to use those moments to spread awareness of the throwaway culture Pope Francis has regularly criticized, and to maybe even help spread the cause.

"As individuals we can start that little bit of that education," she said. 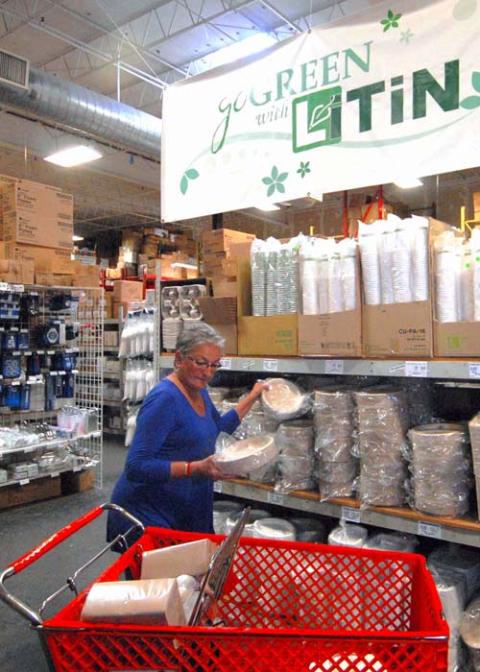 Marcia Kurtz, a member of the Eco Spirits ministry at St. Joan of Arc Parish, in Minneapolis, shops for compostable materials for the parish at Litin Party Supplies. (Jeffrey Grosscup)

Be mindful during hospitality

Jeff Grosscup, a longtime parishioner at St. Joan of Arc Church in Minneapolis and member of its Eco Spirits ministry, said a good place to start is looking at a parish's hospitality functions.

"All these things have the same set of issues: You're going to be preparing food, you're going to be generating both trash and organic. And just to be mindful of what you can do to be a steward of the earth," he said.

The Eco Spirits did just that, beginning by moving from plastic foam cups to compostable versions. Eventually, they were able to reduce waste headed to a landfill at their annual three-night Cabaret fundraiser to a mere 38 pounds.

Katia Reeves, a member of the creation care team at St. Thomas Aquinas Parish, in Palo Alto, California, added another first step is to check with your city or county to see what recycling and composting programs they offer. She admits their waste reduction efforts would be hampered without the city of Palo Alto's zero waste program, which provides pick-up for composting and recycling. In addition, California law requires businesses to recycle.

"The policies from the city and the state I think reinforce to the people, to the parishioners, that we're all in this together and we need to do our share to reduce the pollution and the greenhouse gases and all that from the environment," she said. 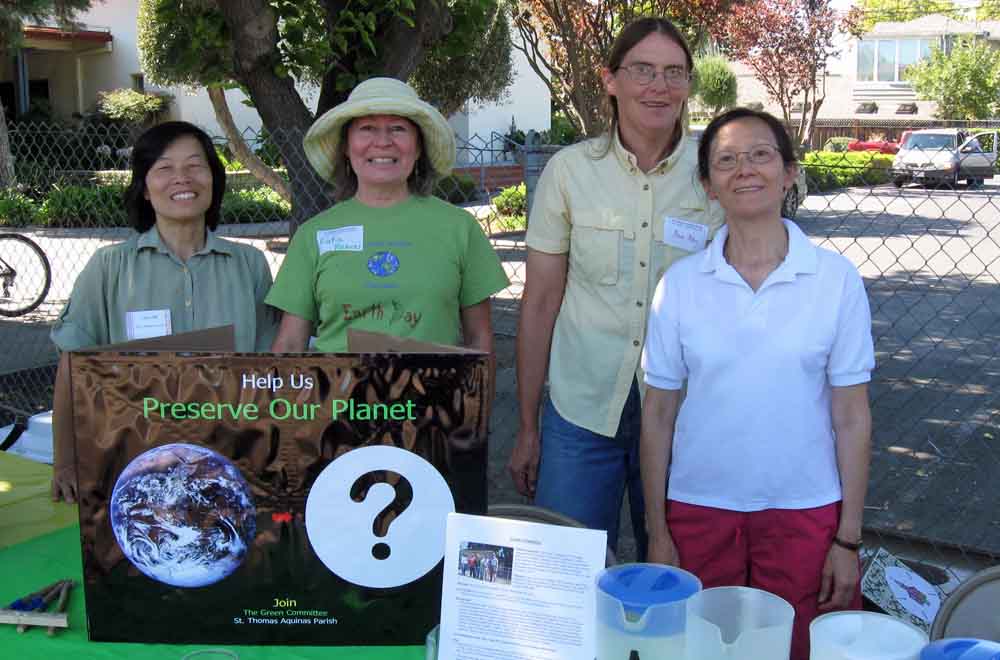 In Papillion, Nebraska, home to St. Columbkille Church, residents can purchase orange bags in which they can place hard-to-recycle items, such as juice boxes, cereal box liners and empty chip bags, which are collected by First Star Recycling and later converted to energy.

During the Christmas season, St. Columbkille partnered with another local company, Plastilite, to rent a 50-plus-foot trailer where anyone in town could bring leftover plastic foam from presents for repurposing. In announcing the program at Masses, Ellen Moore of the creation care team put the material's long lifespan into familiar terms: "The Styrofoam that you're throwing in the landfill today will be here when Jesus comes again, and he's not going to be happy." 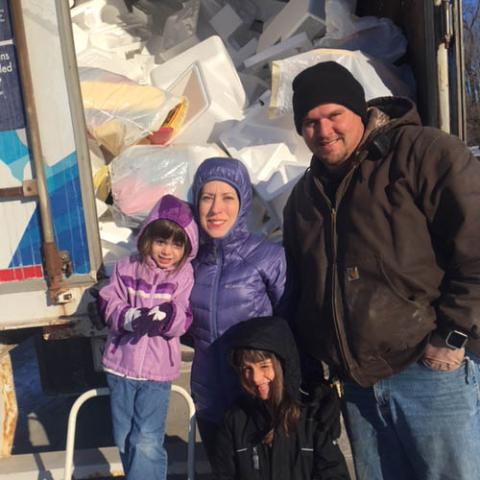 Ellen Moore, a member of the creation care team at St. Columbkille Parish, in Papillion, Nebraska, poses with her family in front of a truck the parish and community packed with 2,400 cubic feet of foam packaging materials left over from Christmas and holiday presents. (St. Columbkille Parish)

To their surprise, the community with a population of 20,000 filled the truck with ease, to the tune of 2,400 cubic feet of packaging foam, or the equivalent of a 12-feet-wide, 40-feet-long, 5-feet-deep swimming pool.

"We didn't expect that kind of response," said Sr. Jean Marie Faltus, a member of the Sisters for Christian Community, a non-canonical order, and a member of the parish's creation care team. Faltus added they were exploring bringing the truck back for the city's annual Clean-Up Days later this month.

Faltus said she's learned that giving people direction and an easy outlet to dispose of recyclable and compostable materials — from plastics, to food waste, to old batteries — makes all the difference in keeping it out of their garbage cans.

If you provide it, they will dispose properly.

"People are very willing, they just need to know what to do with it. And they don't want to be bothered with taking it themselves," she said.

Reeves said it took a long time to train people at Aquinas to use the proper bins. Part of that was different rules on what can be recycled from different waste management companies.

To help, they've placed signs on the bins as well as hung posters above them with samples of items acceptable for each bin. At the parish picnic one year, they held a game where children had to throw various pieces of trash into the correct bin in order to win a prize, either shoestrings or a tote bag, both made from recycled plastic bottles. Occasional bulletin blurbs also reinforce the behavior.

"It's not something that you do it once and forget it. You just have to continually remind people," she said. 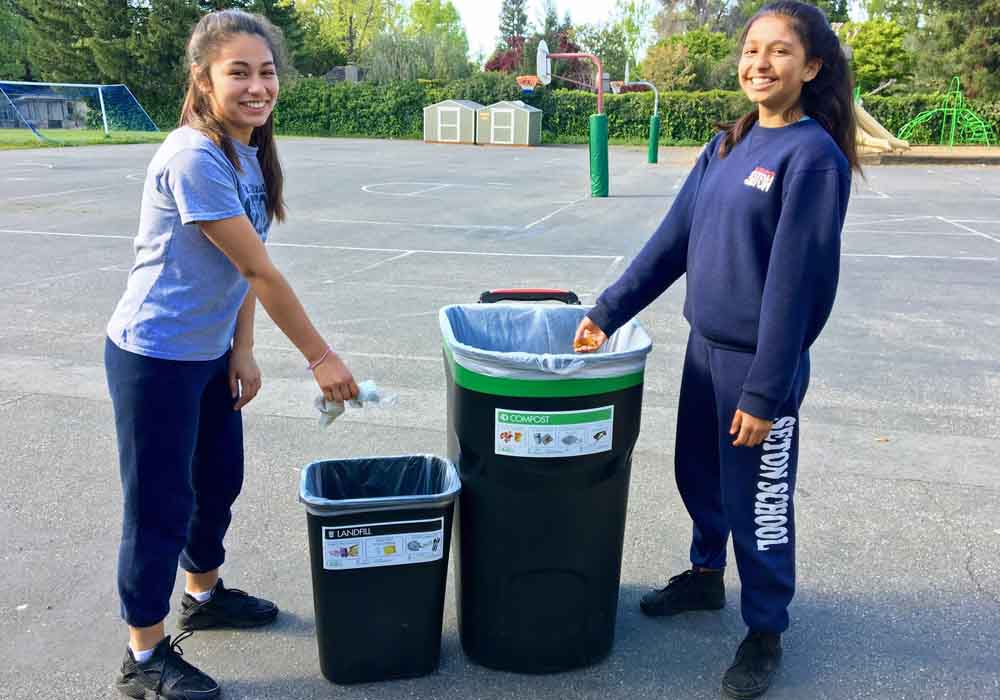 Dominican Sr. Mary Ellen Leciejewski, vice president of corporate responsibility at Dignity Health, said ease is essential to getting the staff, patients and visitors to its 39 hospitals to use the proper bins. That means making sure bins are accessible, such as in patient rooms, as nurses for one don't have time to walk all the way down the hall to recycle something.

"We move so fast in our culture, we have to make it as easy as possible for people. So whatever we can do to offer an alternative," Leciejewski said.

At St. Mark Church, in Vienna, Virginia, the Care for Our Common Home ministry has taken numerous steps to educate and raise awareness, including hosting a speaker about living a zero waste lifestyle and screening the documentary "Bag It" about plastic bags. Eventually, Betsy Zolper, co-chair of Care for Our Common Home, hopes to create a sustainability guide for the parish.

One of the biggest hurdles for parishes taking on waste reduction to overcome is changing the culture, doing so in a way that makes it simple for people while avoiding frustration or surfacing Catholic guilt that turns people off altogether.

Zolper found that while sustainability motivated her and others on the green team to substitute biodegradable coffee cups for plastic foam ones, it didn't strike a chord with everyone. Some were happy with the change because of health concerns with drinking from foam cups, which others found not aesthetically pleasing.

Change is slow, but critical

Ed Sabo, a member of the green team at St. John Neumann Church, in Reston, Virginia, acknowledges that change to the throwaway culture comes slowly. A common word heard in opposition: convenience.

"It's just so convenient for whoever's organizing the particular social event … just to throw everything in the trash and take a couple trash bags out. As opposed to taking the time to collect the cups and plates and run them through the dishwasher and put them back away," he told NCR.

For the summer, the parish's Care for Our Common Home ministry is working to set up composting bins during the farmer's market held in the parish parking lot. They also plan to revamp their recycling bins with the facilities manager to make them clearer — and easier — for people to use, even if that means scaling back what items they focus on accepting. 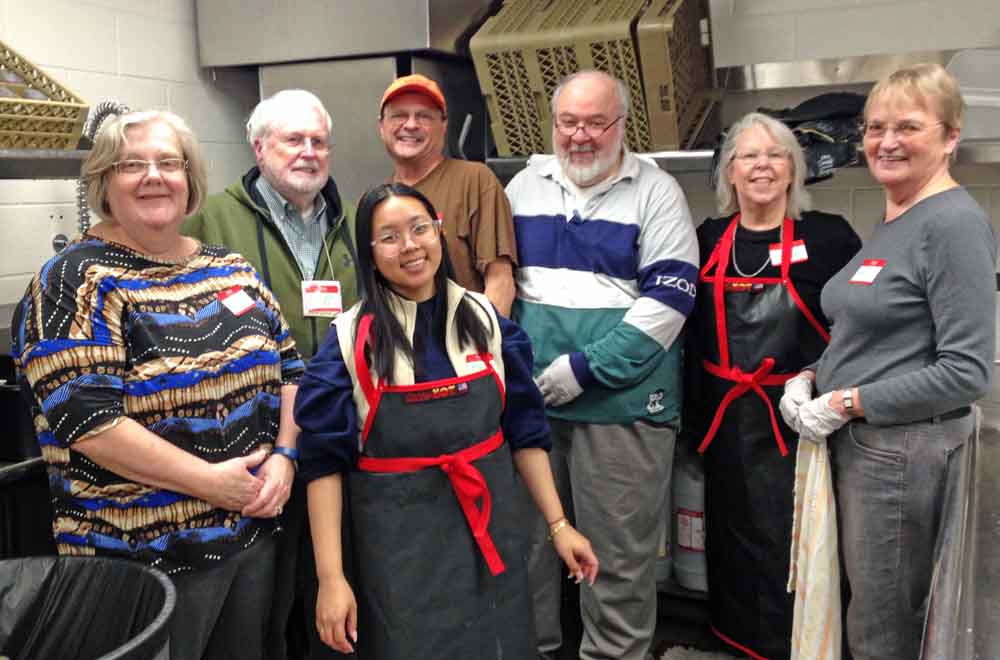 Members of the Care for Our Common Home ministries at St. John Neumann Church, in Reston, Virginia, and St. Mark Church, in Vienna, wash reusable plates, utensils and cups in an effort following dinners they served at a hypothermia shelter in January. (Ed Sabo)

Both Sabo and Zolper know that such steps aren't universally viewed in their neighboring parishes of the Arlington Diocese as part of what it means to be Catholic — they each only learned in recent years of care for creation's inclusion in the tenets of Catholic social teaching.

"We're trying to lead by example, so to speak," Sabo said. "That if we can show that this is an important part of our Catholic faith, to reduce our waste and that sort of thing, then that visibility that we're doing at the parish level will filter over to people's individual actions on the home front."

Faltus at St. Columbkille said they work to attach all their environmental efforts to what it means to be pro-life, that that worldview extends to "things that sustain life as well as just bringing life into the world."

As part of its Earth Day program, the Catholic Climate Covenant has asked parishes, schools and other Catholic groups to take up some action throughout the summer toward reducing single-use plastics in their daily lives. They plan to share those efforts on social media during the Season of Creation (Sept. 1-Oct. 4) in hopes of spurring more to follow.

"We have to start thinking also how we use plastics, not just at home but after church, for example, during our coffee hours, during our community get-togethers. Is there a way to change that culture of convenience where we've got plastic cups and Styrofoam cups and plastic dinnerware?" Artaza-Regan said.

She knows it isn't easy to always avoid unnecessary and unrecyclable waste in a world that at times feels like it's wrapped in plastic. But that's all the more reason to raise awareness, she said, to take on the throwaway culture one step, one person, one parish at a time.

Editor's note: This is part three of a three-part series. You can read part one here and part two here.

This story appears in the Reducing waste feature series. View the full series. 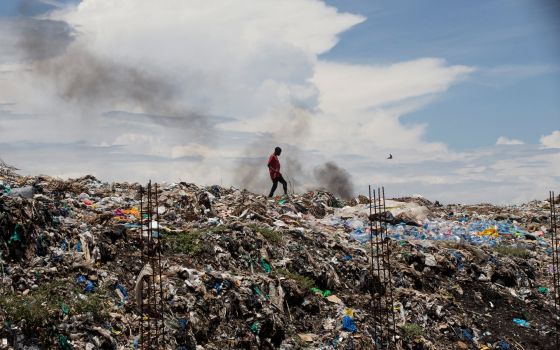 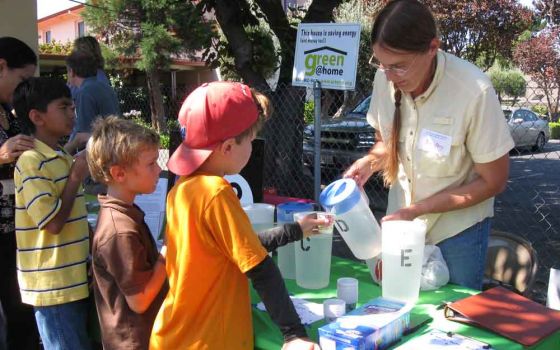 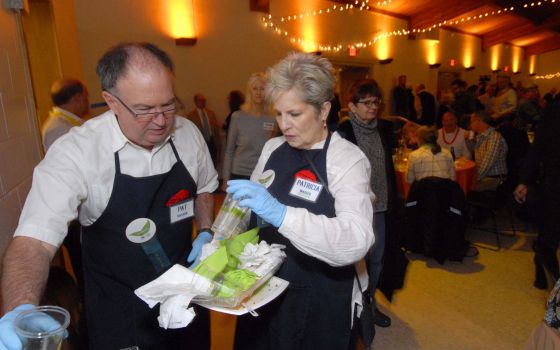 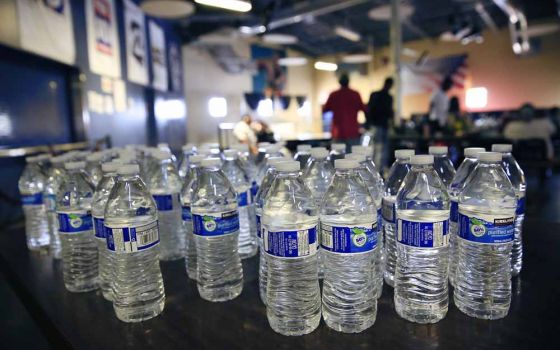