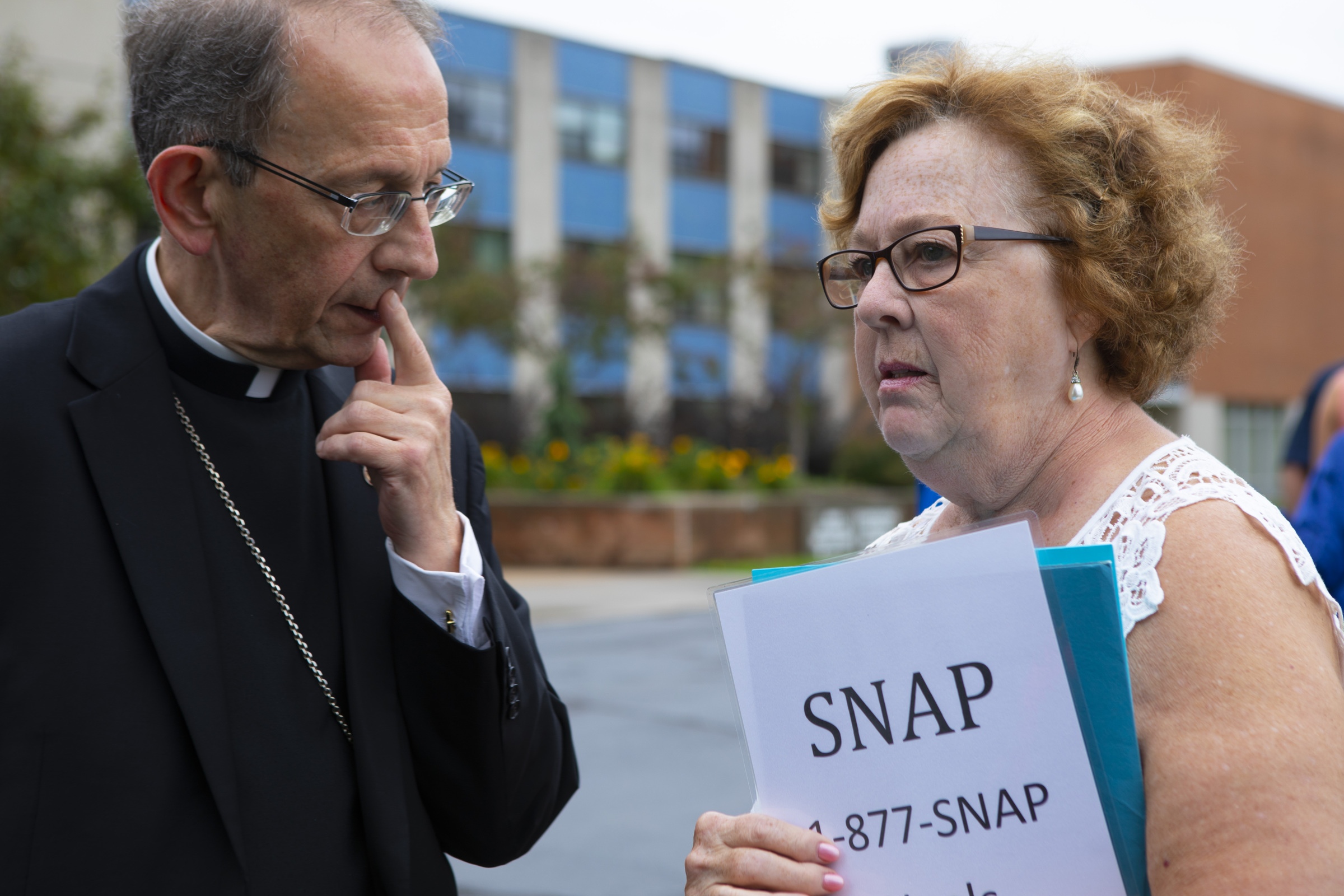 Judy Jones, Midwest regional leader of Survivors Network of those Abused by Priests, speaks with Bishop Lawrence Persico of Erie, Pa., shortly after her organization's Aug. 21 news conference in front of the headquarters of the Diocese of Erie. The Diocese of Erie announced it plans to launch a Survivors' Reparation Fund in February 2019. (CNS/Chaz Muth)

Survivors of sexual abuse by clergy, lay employees or lay volunteers in the Diocese of Erie will be eligible to file financial claims with a new compensation fund.

The Survivors' Reparation Fund will launch in February and was described as an option for abuse survivors who are prevented from seeking compensation through the courts under Pennsylvania's statute of limitations regarding sexual assault.

Erie Bishop Lawrence Persico announced the establishment of the fund Dec. 14 in a news release, saying it would be independently administered by a leading expert who has overseen other compensation funds established in response to high-profile cases.

"It is my sincere hope that the establishment of the Diocese of Erie's Survivors' Reparation Fund will provide some measure of justice, closure and validation for the terrible acts that victims endured," Persico said.

"Although money will never fully heal the deep wounds felt by survivors, this fund is a crucial step in the diocese's ongoing reconciliation and reform efforts," he added.

The fund is one of several that dioceses recently have established. Other funds include a program for the five dioceses in New Jersey, and the dioceses of Pittsburgh, Scranton and Greensburg in Pennsylvania.

The actions in Pennsylvania follow the July release of a state grand jury report covering 70 years of abuse allegations in six of the state's Catholic dioceses, starting in 1947. The report detailed allegations of abuse by 300 clergy and other church workers and involving 1,000 minors. It also claimed a church cover-up of abuse in some instances.

As in some of the other dioceses, church officials in Erie retained expert mediator Kenneth Feinberg to administer the program. Feinberg, an attorney, has overseen various funds, including those for 9/11 victims, the Deepwater Horizon oil well disaster, New York diocesan abuse victims and Pennsylvania State University's program established for sex abuse victims of former football coach Jerry Sandusky.

Under the fund's provisions, minors and vulnerable adults will be eligible to file claims, the diocesan announcement said.

Feinberg's organization "will retain total discretion over all final eligibility and compensation claims," the diocese explained. Each submitted claim will be assessed independent of the diocese while assessment offers will be made "in a victim-centered and transparent distribution process designed for prompt payouts without the need for costly private lawyers or years-long litigation," the diocese said.

In establishing the fund, the diocese said its fund offers an option for survivors to avoid the "uncertainty" surround Pennsylvania's potential amendment to the statute of limitations on sexual abuse claims.

The fund also will provide third-party legal counsel to survivors free of charge.

In addition, the process under the fund will allow survivors to receive historical data about their reports to the diocese, the abusers and the "diocese's failings in promptly reporting and suspending abusers," the diocese said.

The diocese planned to contact known victims by letter inviting them to participate. Eligible participants include victims who have not previously identified themselves with the diocese.

The claims period will be open for six months from the date the fund launches, which was expected to be in mid-February, the diocese said. Claims that are deemed eligible will be processed and paid within about 90 days, the diocese said.

Once a victim accepts a compensation offer, he or she will be required to sign a release waiving any rights the victim or their heirs or beneficiaries have against the diocese or any potentially responsible party to assert any claims relating to sex abuse allegations.

In Pittsburgh, Bishop David Zubik announced the establishment of a similar compensation program Dec. 13 that also would be administered by the Feinberg firm.

The Independent Reconciliation and Compensation Program for claims of sexual abuse of minors will be funded through investments from the earlier sale of diocesan properties and closed institutions, Zubik said.

"The payment of money cannot heal the scars of sexual abuse afflicted upon a young person," the bishop told the Pittsburgh Catholic, the diocesan newspaper. "However, what compensation can do is help acknowledge the scourge of past clergy sexual abuse."

The compensation program of the Catholic Church in New Jersey also will be administered by Feinberg, the New Jersey Catholic Conference announced Dec. 14.

Like the Pennsylvania funds, the new program will operate independently from any of the participating dioceses and is being developed to compensate eligible victims of child sex abuse including those whose claims cannot be filed under New Jersey's statute of limitations.

In November, Bishop Steven Biegler of Cheyenne, Wyoming, introduced the Shalom Fund to help pay for therapy for anyone who has been sexually abused by diocesan clergy.

He pledged to contribute one month of his salary to the fund for five years, beginning this year, "as a gesture of solidarity with survivors and as a commitment to bind up the injured and strengthen the weak."