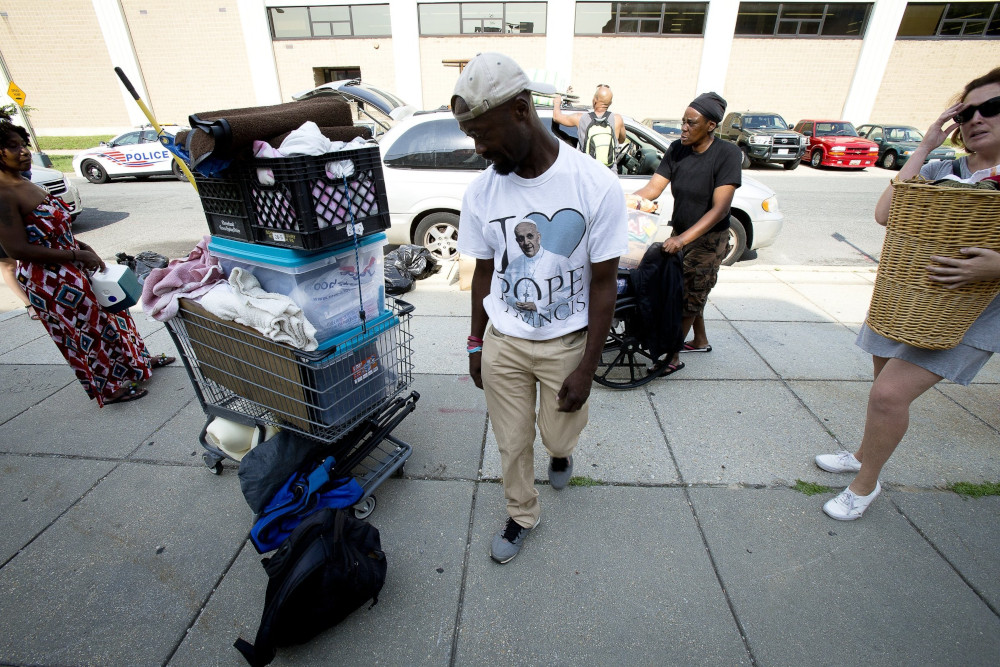 Eric Sheptock, an advocate for the homeless in Washington, helps other people move their belongings June 22, 2017, after police told them they had to move. (CNS photo/Tyler Orsburn)

About a decade ago, the conservative commentator and radio show host Glenn Beck told listeners to “look for the words ‘social justice’ or ‘economic justice’ on your church website. If you find it, run as fast as you can.”

In essence, Beck was telling his followers to reject a strain of Christian theology that dates back at least 100 years in the United States: the Social Gospel.

Popularized by the Rev. Walter Rauschenbusch, a Baptist pastor, in the early 20th century, this theology focuses on issues such as poverty, exploitation, disease and hunger as the primary action items for the church. Instead of focusing on the individual problem of sin, Rauschenbusch and other advocates of the Social Gospel believed Christians should focus on reforming institutions in the United States to make the country more equitable and fairer for all people.

Do American Christians still embrace the core principles of that doctrine? Or do they agree with Beck?

Certain aspects of the Social Gospel still enjoy widespread approval. For instance, about 80% of Christians believe that “God instructs us to protect the poor,” and only 15% believe that “addressing social issues distracts people from achieving salvation.”

Other facets of the Social Gospel provoke more disagreement. While 61% of nonwhite evangelicals agree that “social justice is at the heart of the Gospel,” that sentiment is only shared by 36% of white evangelicals. About 3 in 5 white evangelicals — twice the rate of other Christian groups — agree with the statement “God is more concerned about individual morality than social inequalities.”

Given that white evangelicals are outliers on a number of questions related to the Social Gospel, and white evangelicals’ tendency to vote for Republicans, it seems probable that their divergence from nonevangelicals’ views on social justice is more about political partisanship than about theological tradition. The data confirms that suspicion.

For instance, a Christian who is Republican is twice as likely as a Christian Democrat to believe that “building the kingdom of God on earth is only about bringing people to Christ, not changing social structures.” Two thirds of Democrats who are Christians believe that “social justice is at the heart of the Gospel,” while just 36% of independents and 35% of Republicans of the faith share that belief.

Given that Democrats are more likely to embrace tenets of the Social Gospel, it would be fair to believe that they are hearing these beliefs amplified in their churches, while Republicans are hearing more discussion of personal salvation and individual responsibility.

To test that theory, I put together a data model to determine how religion interacts with political partisanship to shape people’s beliefs about the Social Gospel. This model only included respondents who identified with a religious tradition; the religiously unaffiliated “nones” were excluded. I controlled for age, income, education, gender, race and other basic demographic factors.

Clearly, Republican Christians, regardless of church attendance, are more likely to believe that individual morality is more important than societal inequalities. Church attendance only accelerates this belief, with more than half of Republicans who are weekly attenders agreeing on personal morality, compared with less than 40% of those who never attend.

Not much of a surprise. But for the Democrats, the data gets more interesting. The more that they attend church, the more likely they are to embrace a message of individual responsibility as opposed to societal sin.

If those on the left side of the political spectrum are attending churches that preach a strong version of the Social Gospel, those messages are not finding their way into the hearts and minds of the average liberal churchgoer. In fact, the data says just the opposite: The more Democrats go to church, the more they hold views on individual responsibility in common with Republicans.

That may come as a surprise to many progressive Christian communities and organizations that focus squarely on Social Gospel concerns like the Poor People’s Campaign, but there is no evidence to be found here that religious Democrats are more likely to focus on the problems that preachers like Rauschenbusch focused on during the Progressive Era.